Accessibility links
New Voting Laws Under Debate In Arizona, Texas And Tennessee Could Lower Turnout After high turnout in the 2018 midterms gave Democrats big gains, several Republican-controlled states are considering changing the rules around voting in ways that might reduce future turnout. 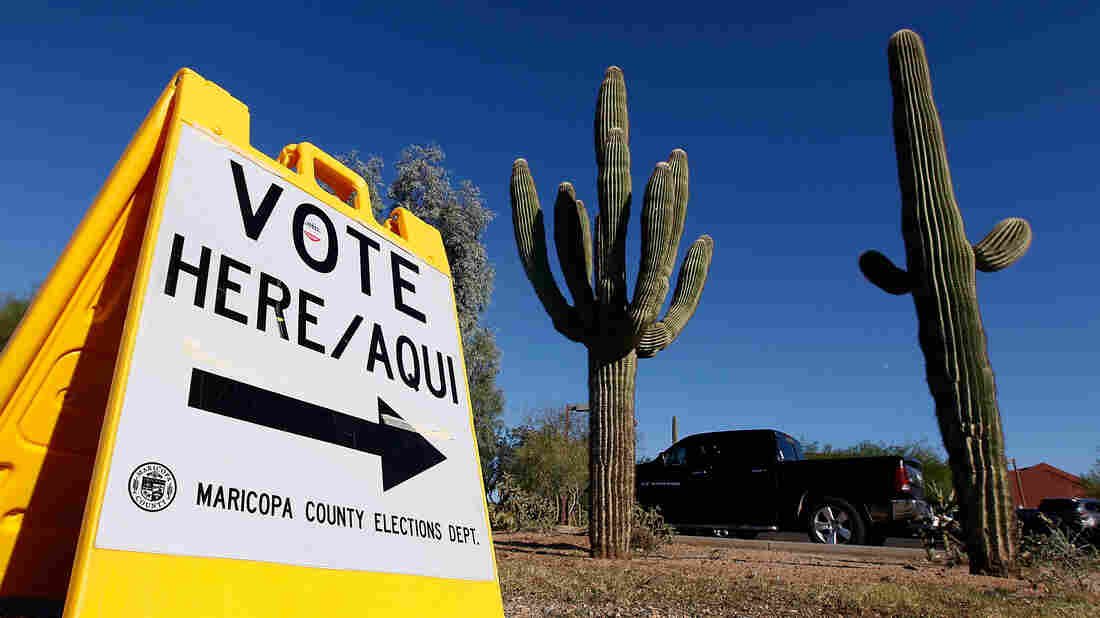 A sign directs voters to a polling station on Nov. 8, 2016, in Cave Creek, Arizona. The state is one of several considering new voting laws that could make it more complicated to vote in 2020. Ralph Freso/Getty Images hide caption 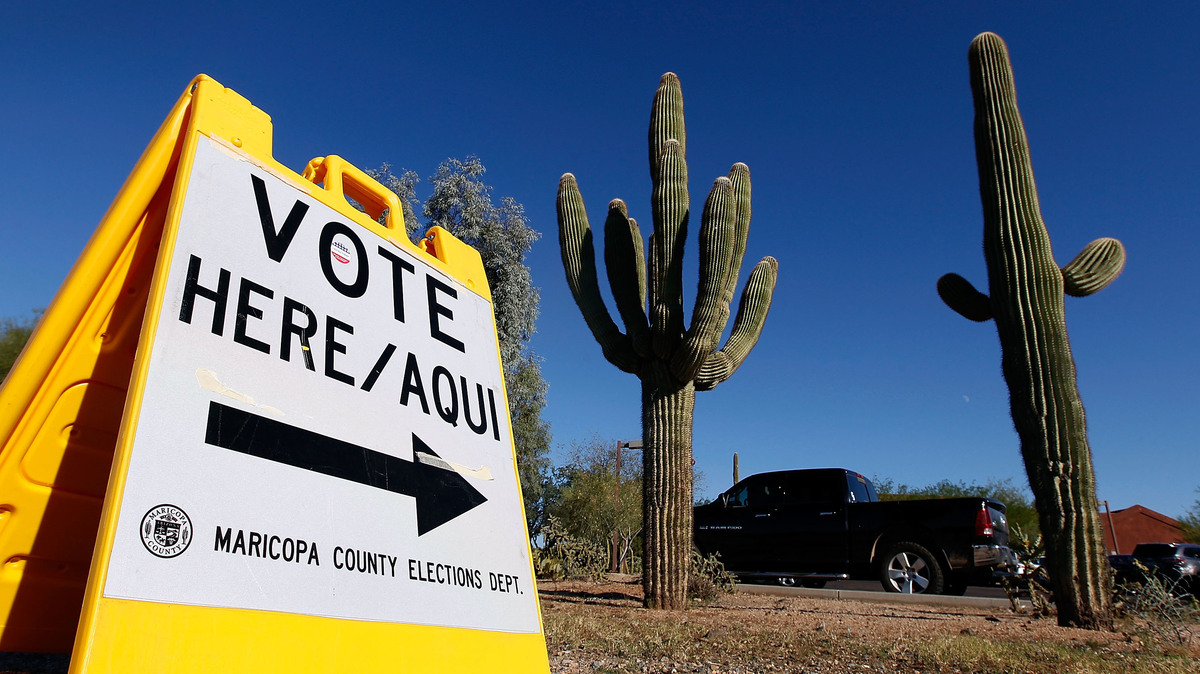 A sign directs voters to a polling station on Nov. 8, 2016, in Cave Creek, Arizona. The state is one of several considering new voting laws that could make it more complicated to vote in 2020.

After high turnout in last year's midterm elections propelled Democrats to a new House majority and big gains in the states, several Republican-controlled state legislatures are attempting to change voting-related rules in ways that might reduce future voter turnout.

In Texas, state lawmakers are considering adding criminal penalties for people who improperly fill out voter registration forms. Arizona Republicans are proposing new voting rules that could make it more complicated to cast an early ballot. In Tennessee, GOP lawmakers are considering a bill that would fine groups involved in voter registration drives that submit incomplete forms.

Republican lawmakers in those states say new laws are needed to maintain the integrity of voter rolls and prevent fraud. Voting rights advocates and Democrats dismiss those claims and argue that the policies are designed to dampen turnout among younger, nonwhite and poorer voters, who are less likely to back Republicans.

If enacted, these proposals could have an impact on future elections, especially in Arizona and Texas, where demographic and political trends are making both states more competitive on the national level for the first time in decades.

Last fall, Arizona Republicans saw their total control of all statewide offices shattered by surging Democratic turnout, losing four of nine statewide races — including a U.S. Senate seat. Democrats view the state's other Senate seat as one of their best pickup opportunities in 2020. In Texas, record turnout helped Democrats flip two congressional and 12 state legislative seats — not to mention come closer than they have in decades in the Senate race. While Tennessee wasn't ultimately competitive in 2018, there was a surge of newly registered voters in the Democratic strongholds of Memphis and Nashville.

"We are seeing both the good and bad side of the fallout of the 2018 election," said Danielle Lang, co-director of the voting rights and redistricting program at the nonpartisan Campaign Legal Center. 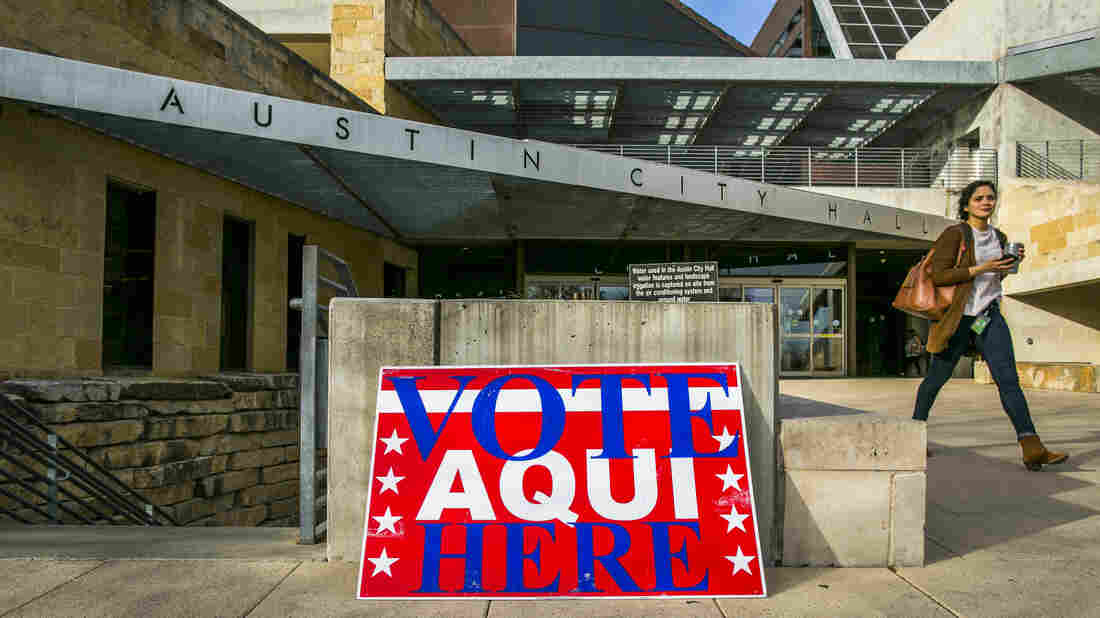 Democrats saw a major increase in voter turnout in Texas last year. Now, in the name of combating voter fraud, the Republican-controlled state legislature is looking at a new law that could increase criminal penalties for those who don't fill out voter registration forms properly. Drew Anthony Smith/Getty Images hide caption 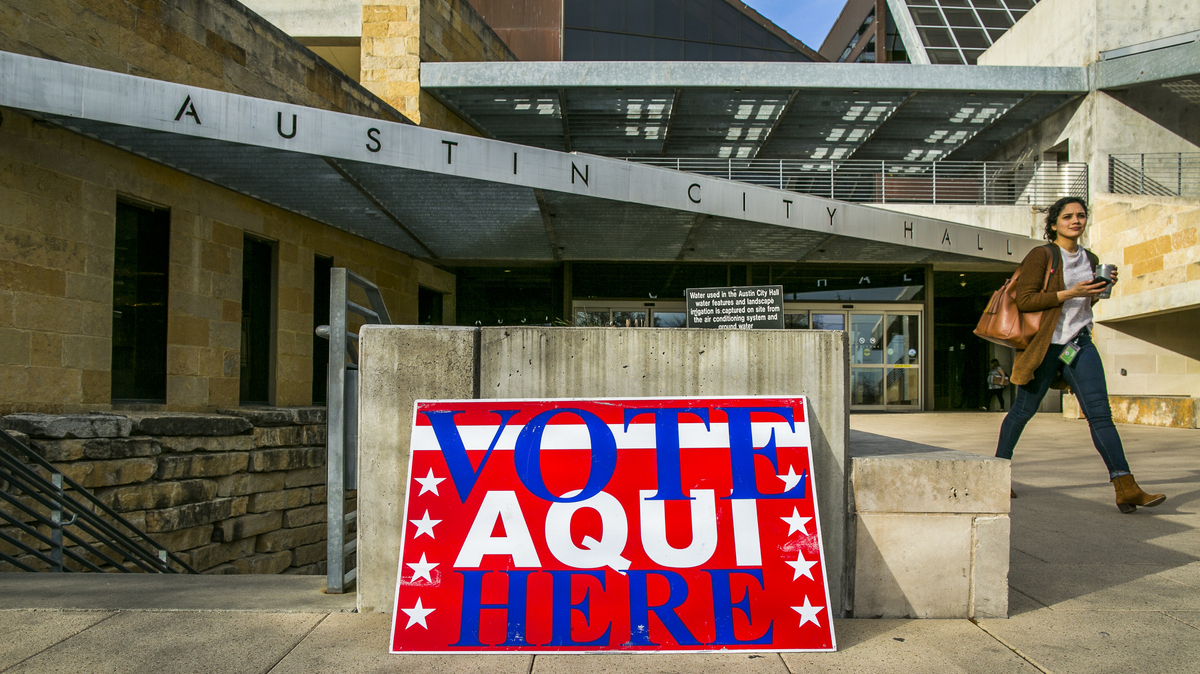 Democrats saw a major increase in voter turnout in Texas last year. Now, in the name of combating voter fraud, the Republican-controlled state legislature is looking at a new law that could increase criminal penalties for those who don't fill out voter registration forms properly.

Texas: from misdemeanor to felony

Texas Senate Bill 9 — which was recently approved by the state Senate and is under consideration by the legislature — would make it a felony, punishable by jail time, for anyone who provides false information on a voter registration form or casts a ballot when they are ineligible, even if it's by mistake.

Voting groups in the state say they are concerned this effort could result in jail time for people who don't properly fill out their voter registration forms. Currently, providing false information on an application is a misdemeanor.

"If Senate Bill 9 passes, a person who makes a simple mistake — puts the wrong ZIP code on a voter registration card — could be prosecuted, fined and even put in jail," said Kathy Miller, president of the Texas Freedom Network, which registers young voters, among other things.

She described the bill as "one of the most strict voter suppression laws in the country," noting that Texas is already one of the most difficult states in which to register voters and that the proposed new penalties could make it even harder.

The bill's sponsor, state Sen. Bryan Hughes, a Republican from rural east Texas, says the point of the bill is not to crack down on people who "inadvertently check a wrong box." He says the point is to make sure local prosecutors "are prioritizing these crimes."

"This bill is aimed at people who are intentionally cheating," Hughes says. "This is not to catch people who make an honest mistake."

Cases of intentional voter fraud are rare in Texas — in many instances in which authorities have prosecuted someone, the people being prosecuted said they did not realize they were ineligible to vote.

Voting rights lawyers are also concerned about the bill's increased criminal penalties for those who cast a ballot — including a provisional ballot — when they are ineligible to vote.

Provisional ballots were created by federal law to allow people to vote if they aren't sure they can, and a provisional ballot is counted only once election officials determine that the voter who submitted it is eligible. Provisional ballots are often used when eligible voters are erroneously not included in their state's voter roll.

"It would assume that if you knew the facts that made you ineligible to vote, even if you didn't know the law, casting that provisional ballot would essentially make you a criminal," he said. 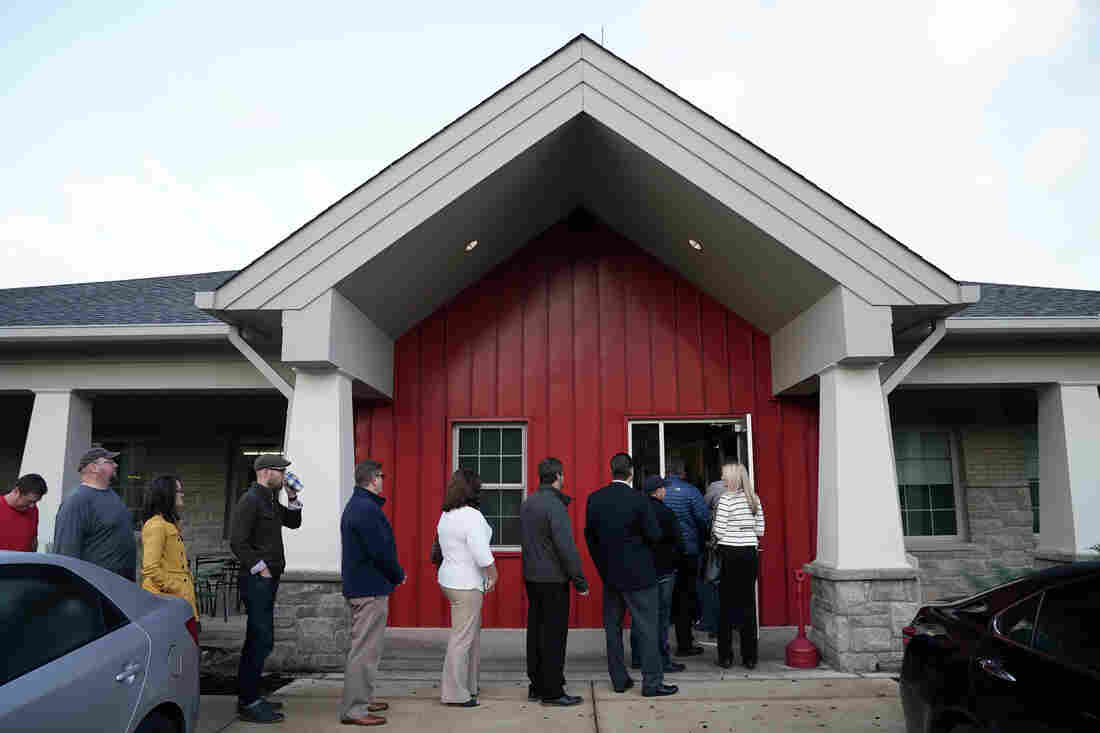 A polling station in Franklin, Tenn., on Election Day 2018. Tennessee's legislature is considering a bill that would impose hefty financial penalties on groups that register voters if they submit too many improperly filled out forms. Alex Wong/Getty Images hide caption 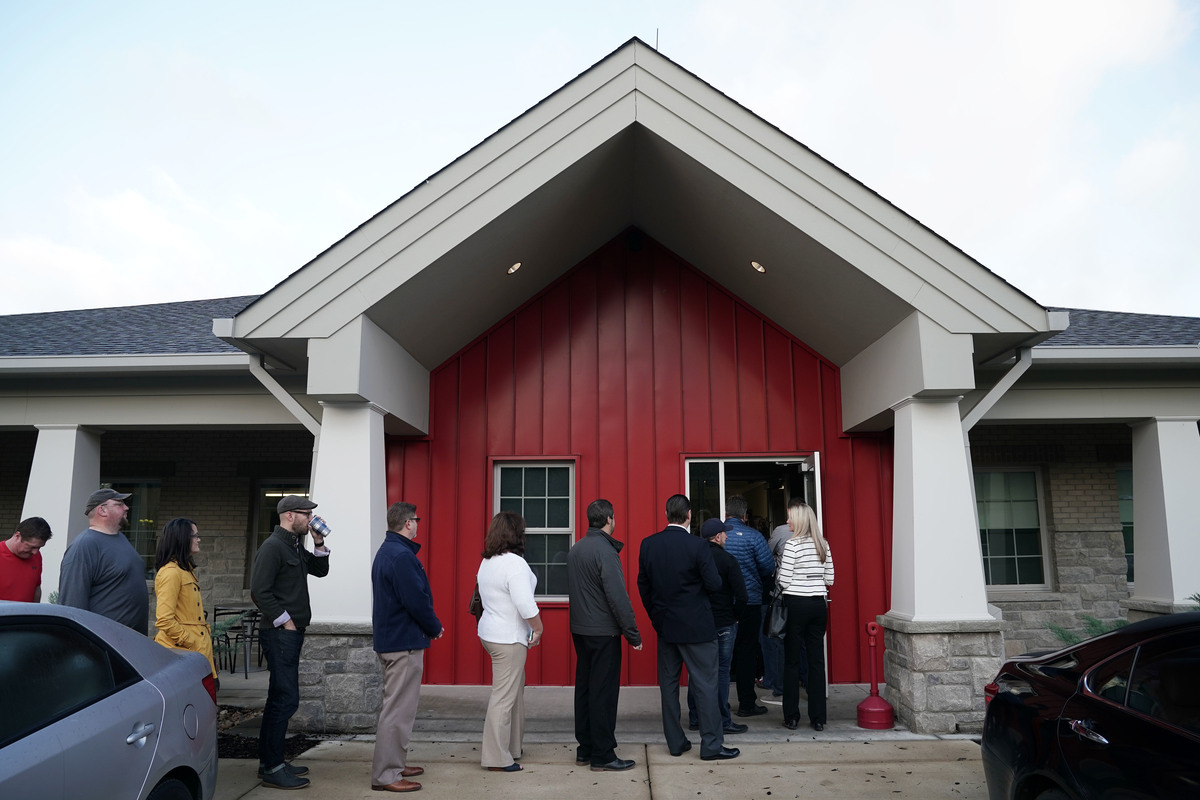 A polling station in Franklin, Tenn., on Election Day 2018. Tennessee's legislature is considering a bill that would impose hefty financial penalties on groups that register voters if they submit too many improperly filled out forms.

Tennessee: "We have never seen a bill like this"

In Tennessee, Republican lawmakers point to a surge of incomplete voter registration forms submitted in Memphis and Nashville during the run-up to the 2018 midterms as the motivation behind that state's legislation.

Coordinator of Elections Mark Goins said that under the state's current law, county election commissions are obligated to track down and verify incomplete registration forms.

"This is only going after folks that create chaos intentionally or knowingly," Goins told member station WPLN.

The measure, which already passed in the state's House, is backed by Goins. It proposes fines of up to $10,000 for groups that pay people and that submit more than 500 incomplete forms, with lower penalties for fewer incomplete registration forms.

But for people who "intentionally and knowingly" submit incomplete forms, the bill suggests they could face misdemeanor charges.

The legislation would also require groups to turn in the forms within 10 days of the registration drive and would require training for people conducting voter registrations of over 100 people. Groups also wouldn't be allowed to pay campaign workers per registration form.

The risk of fines could deter people from organizing registration drives, said Tequila Johnson, the co-founder of the Equity Alliance, who said the bill is an attack on organizations like hers that focus on registering people of color.

"We have never seen a bill like this on the floor, until we dared to register 86,000 black and brown people to vote," Johnson said at a news conference in Nashville. "This screams racism." 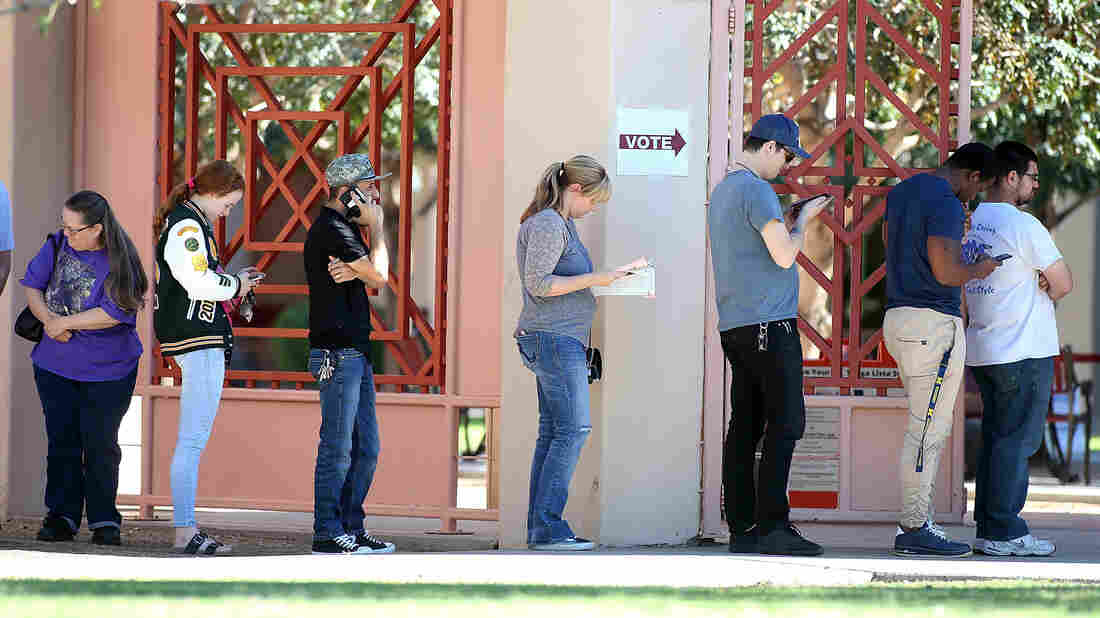 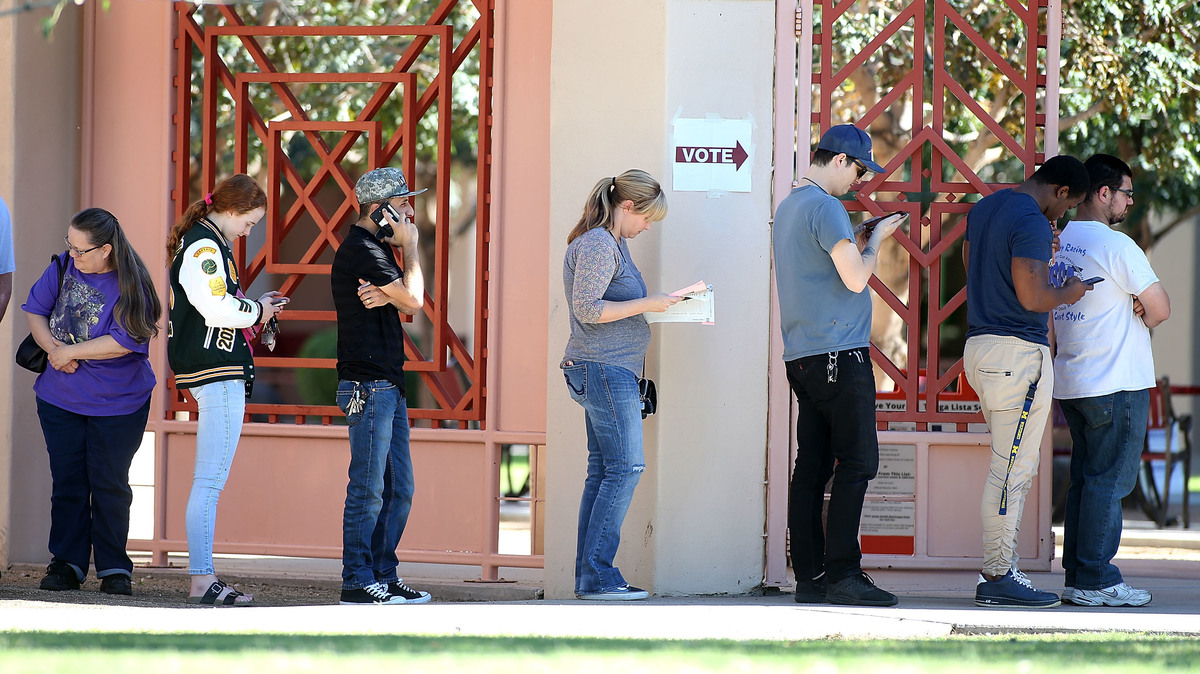 Arizona voters at a Phoenix polling place on Nov. 6, 2018. Arizona is considering major changes to popular early voting rules, which could affect some 200,000 voters.

Arizona: "This is a service — it's a convenience"

The changes that Arizona Republicans are considering would focus on registered voters who have signed up to cast mail-in ballots but don't use them.

The bill would remove some people from what's called the Permanent Early Voting List. People on the PEVL get ballots mailed to them so they can mail the ballots back or drop them off on Election Day.

"We want to make sure that the lists are up to date. That's just good practice. That makes sense on, frankly, any kind of database that you have," she told a House committee. "That you're really communicating with those who want to be communicated with and that are using the service. This is a service — it's a convenience."

Local election officials say that they already have ways to maintain clean voting rolls and that the proposed legislation will simply confuse voters. The Arizona secretary of state's office estimates that 200,000 voters currently on the early voting list did not vote in both 2016 and 2018. But the office also said the bill's language is unclear, making it hard to assess its potential impact.

"There is a great debate around whether or not it is 'peh-vl' or 'pee-vl.' But I find it fitting that if this bill passes, the list will no longer be 'permanent,' and so one might call it 'evil,' " she said.

Republicans dispute that this is an attempt to make voting more difficult. The bill doesn't remove people from the registration rolls, just the mailing list for early ballots.

Republican lawmakers have proposed other bills this legislative session that have drawn criticism from voting rights groups, including one that bans paying workers for each voter registration form they turn in.

"All Americans care about election integrity"

This latest round of legislation lands after a decade-long push by state-level Republicans for strict voter ID laws around the United States. Those laws were criticized by voting rights advocates for adding obstacles to casting a ballot that would particularly harm nonwhite and poor voters, although a recent academic study suggests the laws have had "no negative impact on registration or turnout."

The stated basis that Republican lawmakers gave for many of those laws was to reduce the incidence of in-person voter fraud. Repeated research has unveiled scant evidence of anything more than a small number of instances of voters attempting to cast multiple ballots. But the repeated message that voter fraud was rampant has become a powerful motivator for Republican campaigns to turn out their own voters. Likewise, Democrats have also used potential threats to voting access to mobilize their own supporters.

But the impact of that push has been to increase partisanship and conflict around voting, the centerpiece of a democratic system.

Lawmakers often reexamine voting laws after an election, said Lang, of the Campaign Legal Center. For example, there was a bipartisan push from Iowa's Republican governor to make it easier for felons to restore their right to vote after release, although it ultimately failed. And Kansas, which had been ground zero for fights about election laws for years, recently passed a bipartisan voting law that will make it more convenient to cast a ballot.

"All Americans care about election integrity, and yet these issues get framed in very unhelpful partisan ways," Lang said.