Accessibility links
Zelenskiy Defeats Ukrainian President Poroshenko On Anti-Corruption Campaign Other than playing a teacher turned president on TV, Volodymyr Zelenskiy has no political experience. He defeated incumbent Petro Poroshenko in a landslide. 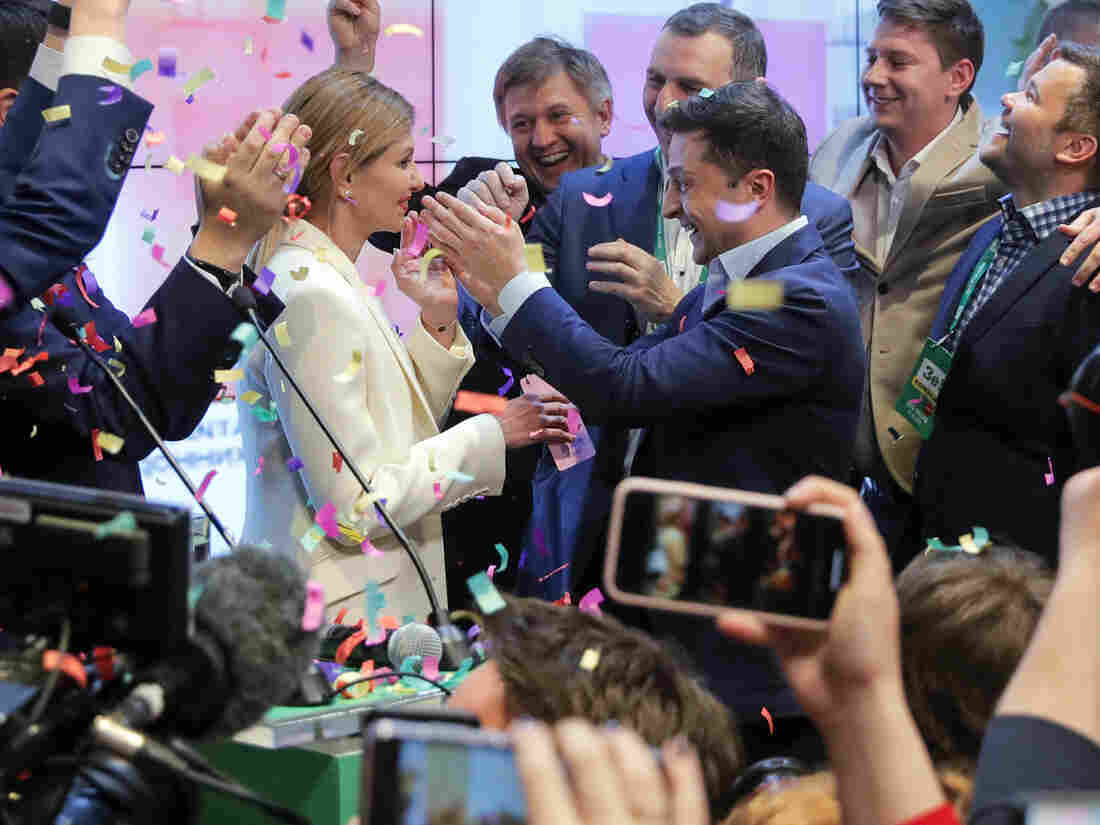 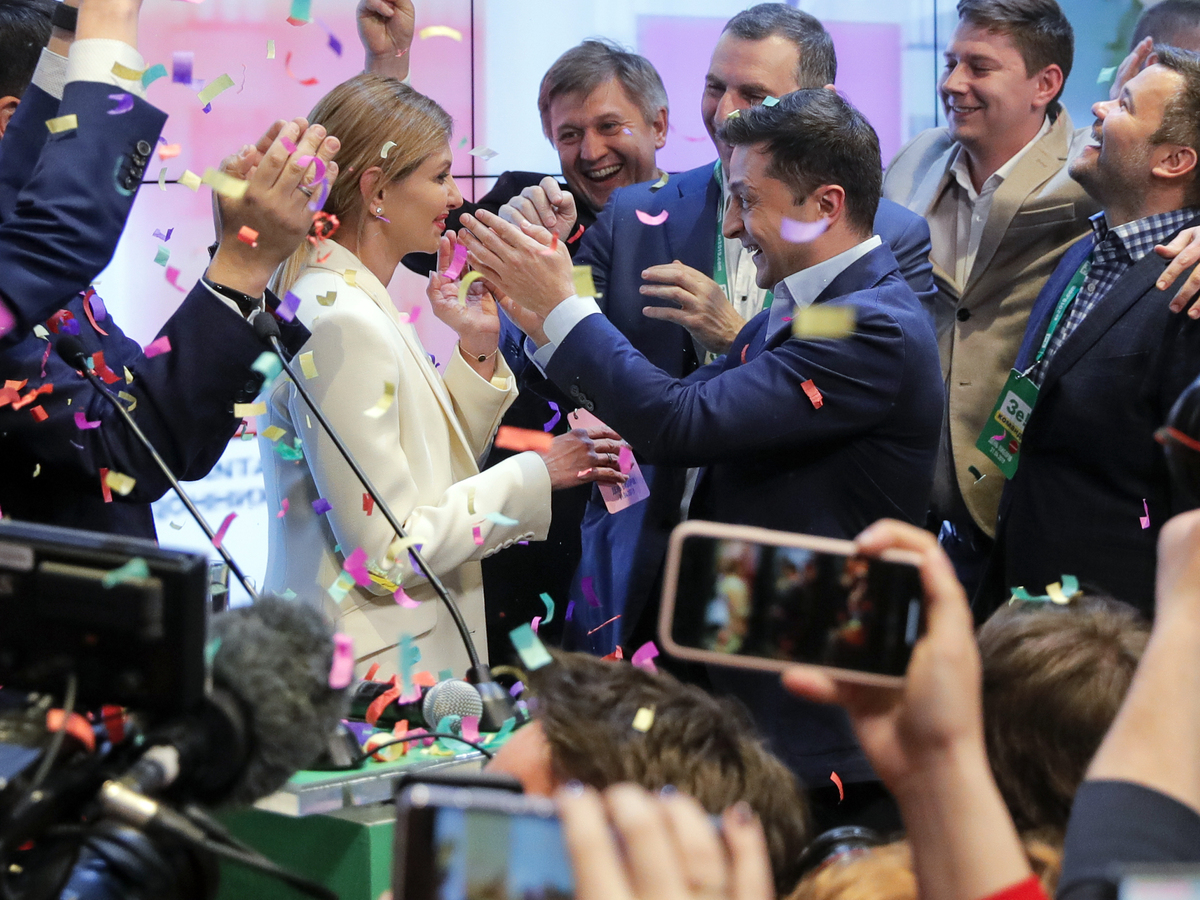 For years he has played a high school history teacher who accidentally became president of Ukraine. On Sunday, Ukraine's voters made that fiction a reality.

With nearly all the ballots counted, the 41-year-old Volodymyr Zelenskiy took 73% of the vote, trouncing incumbent President Petro Poroshenko, who received less than 25%. Zelenskiy's victory is widely seen as a rebuke of the status quo, a response to perceived corruption within the political establishment, and a reflection of malaise over the lackluster economy and ongoing conflict with Russia in eastern Ukraine.

"I will never fail you," Zelenskiy told supporters at his campaign headquarters Sunday night, according to the Kyiv Post. "While I'm not yet president, I can say the following. To all post-Soviet countries: Look at us. Everything is possible."

Zelenskiy has no political experience, and few detailed policy positions. He has promised to end the war in eastern Ukraine and fight corruption within the government, but he hasn't laid out specific plans to accomplish these goals.

"What's amazing is that despite Zelenskiy being a household name, people don't really know what he stands for," NPR's Moscow correspondent Lucian Kim told Morning Edition. "During the election campaign, he was very vague about his positions, and in that way he really became a blank slate for people to project whatever they wanted on him." The fact that voters chose Zelenskiy shows how desperate people are, Kim said.

What Zelenskiy's victory will mean for Ukraine's ongoing conflict with Russia is an open question. In comments to the press, Zelenskiy said he would "do everything possible" to end hostilities with pro-Russian separatists in the country's Donbass region, which has left thousands dead. "Our No. 1 task is to get all of our prisoners of war back," Zelenskiy said. Russia is holding 24 Ukrainian sailors, according to Reuters.

Zelenskiy told reporters he would "reboot" peace talks with the separatists, with an eye toward a ceasefire, the BBC reported. Russia's prime minister, Dmitry Medvedev, said that the Ukrainian election results show "there is a chance to improve the relations with our country after all," according to The Associated Press.

But Ukraine's outgoing president cautioned that the Kremlin is celebrating the election of an inexperienced candidate. Russia believes that "Ukraine could be quickly returned to Russia's orbit of influence," Poroshenko said on Twitter. "I call on the international community to help Ukraine to secure all the recent achievements and the strategic choice of the nation for integration to the European Union and the NATO. Please, stay with Ukraine no matter what! Support Ukrainians and be with them!"

You may just look at the celebrations in the Kremlin on the occasion of the elections. They believe that with a new inexperienced Ukrainian President Ukraine could be quickly returned to Russia’s orbit of influence.

The U.S. Embassy in Kiev congratulated Zelenskiy on his win and praised the peaceful manner in which the election was conducted. The Embassy also thanked Poroshenko for his efforts to strengthen Ukraine's security and democracy over the past five years, as well as his commitment to a bilateral relationship with the U.S. "We look forward to continuing the strong U.S.-Ukraine partnership with President-elect Zelenskyy," the Embassy wrote.

According to The New York Times, many voters said they had supported Zelenskiy "not so much because they thought he was a good candidate but because they wanted to punish Mr. Poroshenko for deflating the hopes raised by Ukraine's 2014 revolution and for doing little to combat corruption."

The Washington Post notes that Zelenskiy is just the latest comedian to win public office in elections around the world. In Guatemala, the former comic actor Jimmy Morales won the presidency on an anti-corruption platform with the slogan, "Not corrupt, not a thief." In Iceland, comedian Jón Gnarr ran for mayor as a joke candidate and won, serving one term before he stepped down in 2014. And in the U.S., Saturday Night Live comedian Al Franken became a senator from Minnesota.

In the show Servant of the People, Zelenskiy's television character became president after an expletive-laden video of him ranting about corruption went viral on social media. "Who's there to vote for? It's always the lesser of two a******s and it's been this way for 25 years," his character said. "If I could have just one week in office, if at all possible, I would show them!"