Accessibility links
Yankees And Flyers Eject Kate Smith's 'God Bless America' Her rendition of the patriotic song had been a staple at New York Yankees and Philadelphia Flyers games for decades. Critics say that other elements of the singer's career were clearly racist. 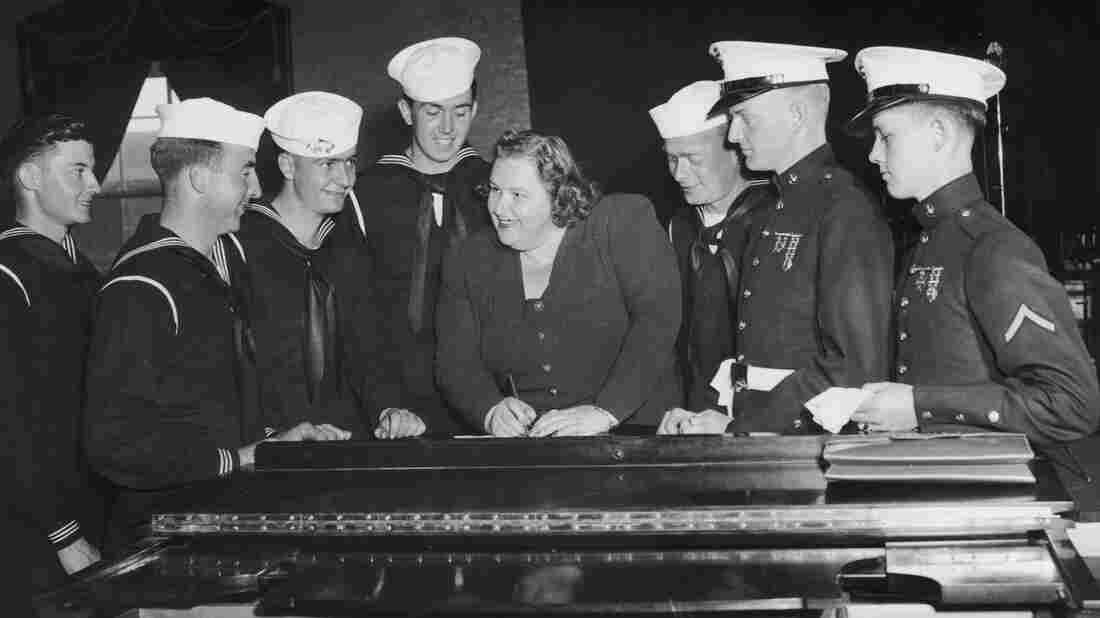 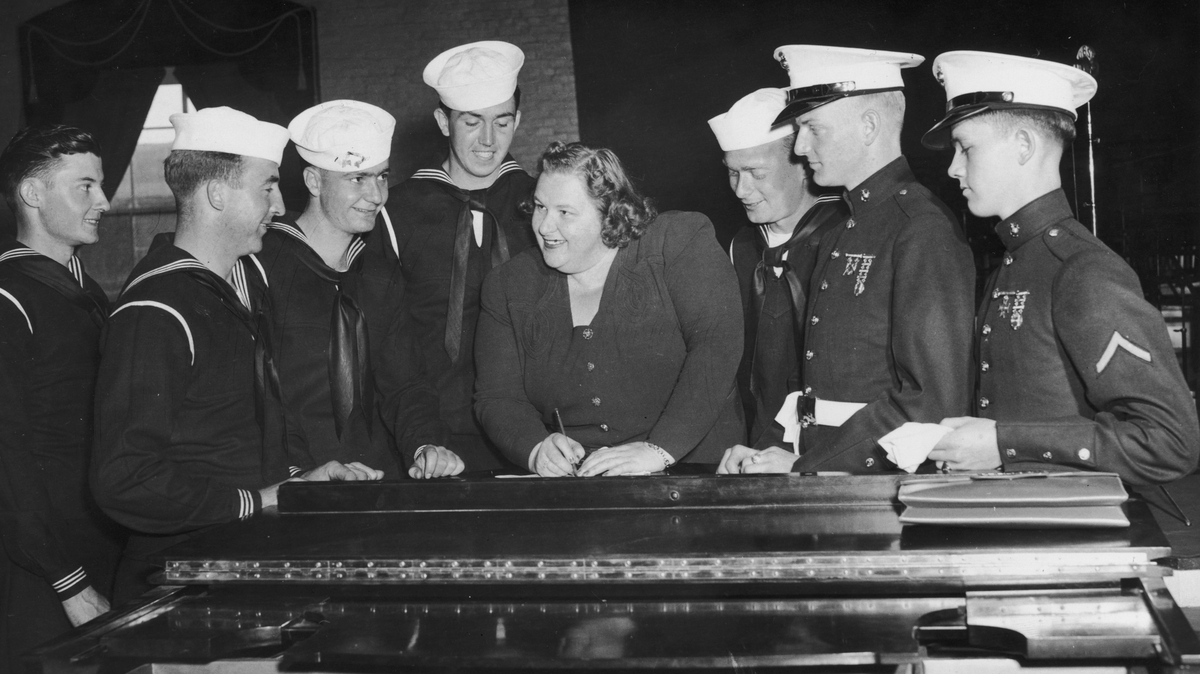 Singer Kate Smith signs autographs for a group of American sailors circa 1938.

The singer Kate Smith's recording of "God Bless America" has been a cherished part of sports tradition in the U.S. for decades. But in the aftermath of a discovery that the singer also recorded at least two songs with racist content in the 1930s, two major American sports teams, baseball's New York Yankees and ice hockey's Philadelphia Flyers, have announced that they will stop playing Smith's rendition of the Irving Berlin patriotic classic. On Sunday, the Flyers also took down a statue of Smith that had stood in front of their stadium since 1987.

A fan alerted the Yankees last week that Smith had recorded at least two problematic songs — 1931's "That's Why Darkies Were Born" and 1933's "Pickaninny Heaven," from the film Hello, Everybody! — the New York Daily News reported on Thursday.

On Sunday, the Philadelphia Flyers removed a statue of Smith that had stood outside the team's arena since 1987, first at the Spectrum and later at the Xfinity Live! venue. Smith sang "God Bless America" live for the Flyers before Game 6 of the 1974 Stanley Cup finals — after which the Flyers beat the Boston Bruins. Since then, the Flyers had treated Smith's rendition as a talisman for the team.

In a statement published Sunday, Flyers President Paul Holmgren said, "The NHL principle 'Hockey is for Everyone' is at the heart of everything the Flyers stand for. As a result, we cannot stand idle while material from another era gets in the way of who we are today."

The statement also said: "While Kate Smith's performance of 'God Bless America' cannot be erased from its place in Flyers history, that rendition will no longer be featured in our game presentations."

On Friday, the Philadelphia team had covered the statue with black cloth. A spokesman for the Flyers told NBC10 in Philadelphia on Friday, "We have recently become aware that several songs performed by Kate Smith contain offensive lyrics that do not reflect our values as an organization." The spokesman added, "As we continue to look into this serious matter, we are removing Kate Smith's recording of 'God Bless America' from our library and covering up the statue that stands outside of our arena."

Smith's career spanned more than five decades and encompassed radio, multiple television shows under her name, commercials and over two dozen albums and hundreds of singles. But it seems that no official working for either team was aware of these two songs.

The Yankees had played Smith's recording of "God Bless America" during the seventh-inning stretch since shortly after the Sept. 11 terrorist attacks. A spokesperson told the Daily News last Thursday, "The Yankees have been made aware of a recording that had been previously unknown to us and decided to immediately and carefully review this new information. The Yankees take social, racial and cultural insensitivities very seriously. And while no final conclusions have been made, we are erring on the side of sensitivity."

Smith, who died in 1986 at age 79, received the Presidential Medal of Freedom — the United States' highest civilian honor — from President Ronald Reagan in 1982 in honor of her artistic and patriotic contributions. In his remarks, Reagan said: "It's been truly said that one of the most inspiring things our GIs in World War II, Europe and the Pacific, and later in Korea and Vietnam, ever heard was the voice of Kate Smith — and the same is true for all of us. ... Those simple but deeply moving words, 'God bless America,' have taken on added meaning for all of us because of the way Kate Smith sang them. Thanks to her, they have become a cherished part of all our lives, an undying reminder of the beauty, the courage and the heart of this great land of ours."

Smith was a foundational figure in pop culture during World War II and used her fame to raise hundreds of millions of dollars for the U.S. government's war efforts. During one 18-hour broadcast on the CBS radio network alone, she helped raise more than $100 million in war bonds. (That would amount to more than $1.4 billion in 2019 dollars.)

In the 1933 film, Smith said that she was singing "Pickaninny Heaven" for "a lot of little colored children, who are listening in at an orphanage in New York City." The sequence includes shots of unkempt black children, while Smith sings of a "pickaninny heaven" where "Mammy" is waiting for them as well as "great big watermelons."

"That's Why Darkies Were Born" was written for a 1931 Broadway revue called "George White's Scandals," a show that featured such stars of the time as Rudy Vallee and Ethel Barrymore.

Some critics have argued that the "Darkies" song was meant to be a satire of white supremacist ideas — and it was famous enough in its day to be referenced in the Marx Brothers film Duck Soup. But modern-day audiences inevitably cringe at lines like "Someone had to pick the cotton / Someone had to plant the corn / Someone had to slave and be able to sing / That's why darkies were born."

"That's Why Darkies Were Born" was also recorded by the pioneering and revered black bass baritone Paul Robeson — who, in his contract for EMI between 1928 and 1939, recorded quite a few songs that many contemporary listeners will find very problematic, including "De Li'l Pickaninny's Gone to Sleep," Stephen Foster's plantation songs and "Poor Old Joe" (aka "Old Black Joe").