Accessibility links
Sri Lanka's Easter Bombings Bring Renewed Violence To A Long-Troubled Country Here are some key things to know about Sunday's deadly attacks, the group that Sri Lanka blames for perpetrating them — and the country's complicated history. 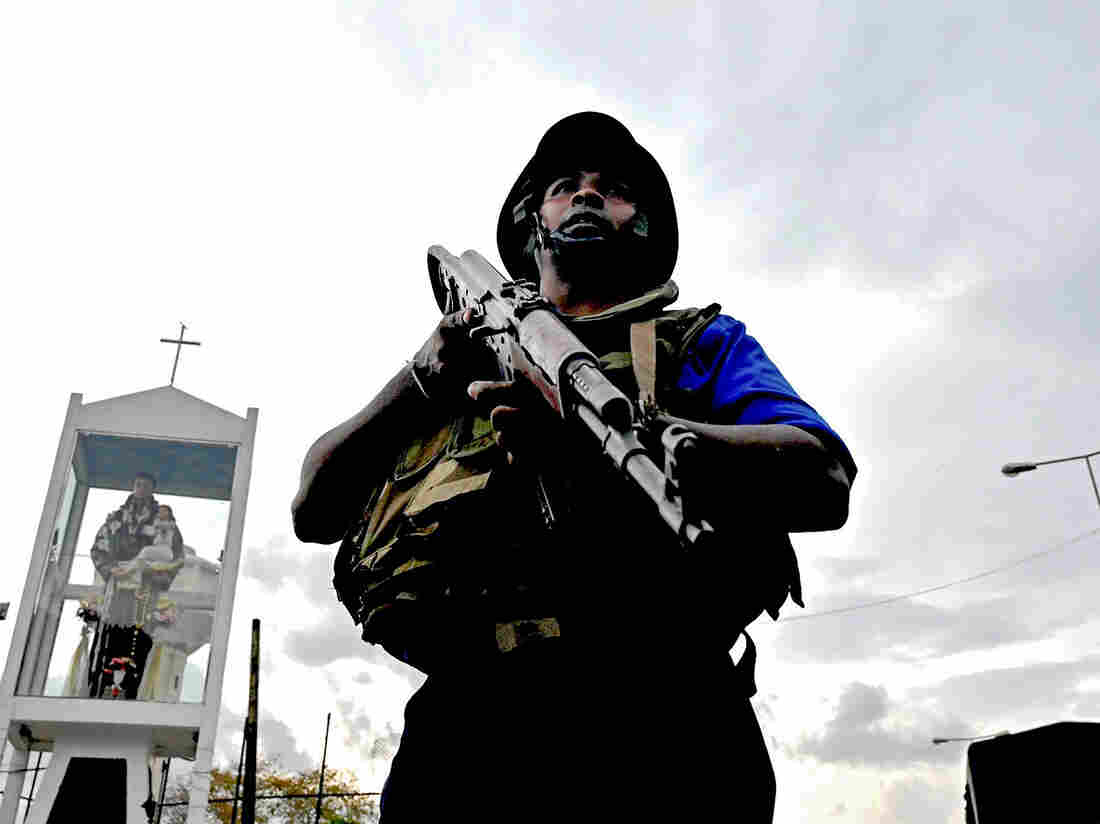 A Sri Lankan soldier stands guard near the site of a car explosion after police tried to defuse a bomb near St. Anthony's Shrine in Colombo on Monday, the day after a series of bomb blasts targeting churches and luxury hotels in Sri Lanka. Jewel Samad/AFP/Getty Images hide caption 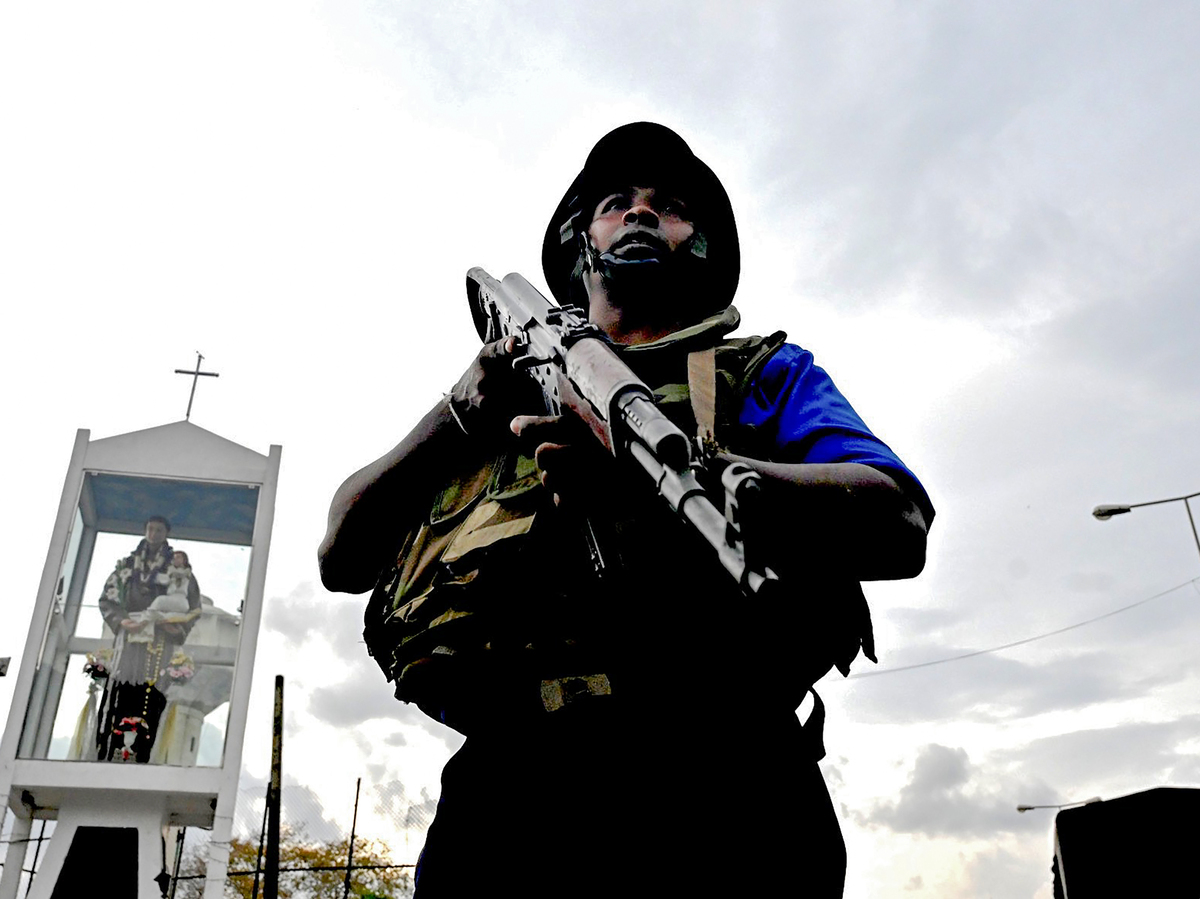 A Sri Lankan soldier stands guard near the site of a car explosion after police tried to defuse a bomb near St. Anthony's Shrine in Colombo on Monday, the day after a series of bomb blasts targeting churches and luxury hotels in Sri Lanka.

According to The Associated Press, among the suspects arrested were the driver of a van allegedly used by suicide bombers, and the owner of a house where some of the attackers lived. Most of the people arrested are Sri Lankans, but police are also investigating whether foreigners were involved in the attacks.

Politicians emerged from an emergency meeting Monday pointing fingers at a little-known local Muslim group, National Thowfeek Jamaath. They said all seven suicide bombers who attacked Christian churches and prominent hotels across the island nation on Easter Sunday were Sri Lankan nationals; however, they also said the suspects could not have succeeded in the highly coordinated attacks without international help.

At least one fresh blast shattered nerves in the traumatized capital, Colombo, where schools and offices were ordered shut Monday and Tuesday. A vehicle exploded as police tried to defuse explosives found in it, near one of the churches attacked the day earlier. An unexploded device was also found on the road to the capital's international airport, and 87 detonators were found scattered at the city's main bus depot.

Funerals began on Monday, as more of the victims were identified. Most were Sri Lankan, many from the country's Christian minority, and had been attending Easter Mass. Tuesday was declared a national day of mourning, according to the president's office.

More than 30 foreigners from a dozen countries were among the dead, including at least four Americans.

Here are some key things to know.

Many of the victims were attending three Christian churches that were targeted — St. Anthony's Shrine in Colombo, St. Sebastian's Church in Negombo, 20 miles north of the capital, and Zion Church, an evangelical church in the eastern coastal city of Batticaloa.

In addition, four hotels frequented by foreigners were hit. An individual being questioned by police also detonated a suicide bomb near a housing complex on the outskirts of the capital.

Who is responsible for the attacks?

No one has yet claimed responsibility, but the government is blaming a group called the National Thowfeek Jamaath.

Little is known about the group, which came to light a few years ago when it was involved in violence in the city of Batticaloa, near the site of one of Sunday's church attacks. It was also reportedly known for vandalizing Buddhist statues. Sunday's attacks were on a massively larger scale than anything for which the group had previously been blamed. The country has no history of Muslim militancy.

The group has a name similar to that of a group based in India's southern state of Tamil Nadu — the Tamil Nadu Thowheed Jamaath, which calls itself nonpolitical and is reported to have denied any links with the group named by Sri Lanka's government.

It would be unusual for a new and relatively untested extremist group to carry out such a broad and coordinated attack on its first attempt. "We do not believe these attacks were carried out by a group of people who were confined to this country," Sri Lanka's health minister and Cabinet spokesman, Rajitha Senaratne, said on Monday. "There was an international network without which these attacks could not have succeeded."

Was there any warning about the attacks?

Many Sri Lankan politicians coming out of an emergency meeting on Monday expressed concern and frustration that parts of the government apparently were aware of a possible attack by the group days before it occurred. A series of warnings had been issued from various sources starting early this month, according to Senaratne.

Prime Minister Ranil Wickremesinghe expressed anger that he was not made aware of the threat.

He and President Sirisena have frequently been at odds. Late last year, Sirisena fired Wickremesinghe, setting off a constitutional crisis that culminated in December, after the president was pressured to reinstate the prime minister.

Is this week's violence connected to the civil war in Sri Lanka that ended a decade ago?

There's no immediate indication that Sunday's attacks have anything to do with Sri Lanka's 26-year civil war.

That conflict, which lasted until 2009, involved an extremist group known as the Liberation Tigers of Tamil Eelam. The Tamil Tigers, as they were commonly known, fought a brutal separatist insurgency against Sri Lanka's majority Sinhalese. The Tamil Tigers were among the first groups to deploy suicide bombers.

Tensions have flared in recent years between Buddhists and Muslims — last year, Buddhist mobs attacked Muslims, leading to a state of emergency. There has been no real history of violence between Christians and Muslims, who, across various ethnicities, account for about 7.5 percent and 10 percent of Sri Lanka's population, respectively.