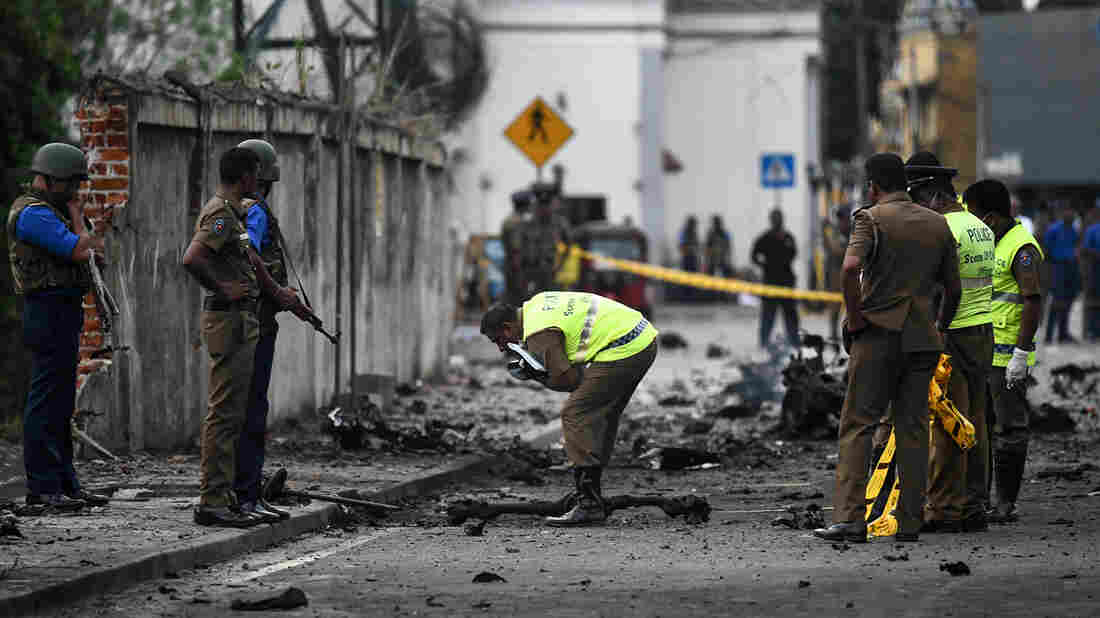 Sri Lankan security personnel inspect the debris of a van after it exploded on Monday near St. Anthony's Shrine in Colombo. More than 300 people died and more than 500 were wounded after Sunday's attacks on churches and hotels. Jewel Samad/AFP/Getty Images hide caption 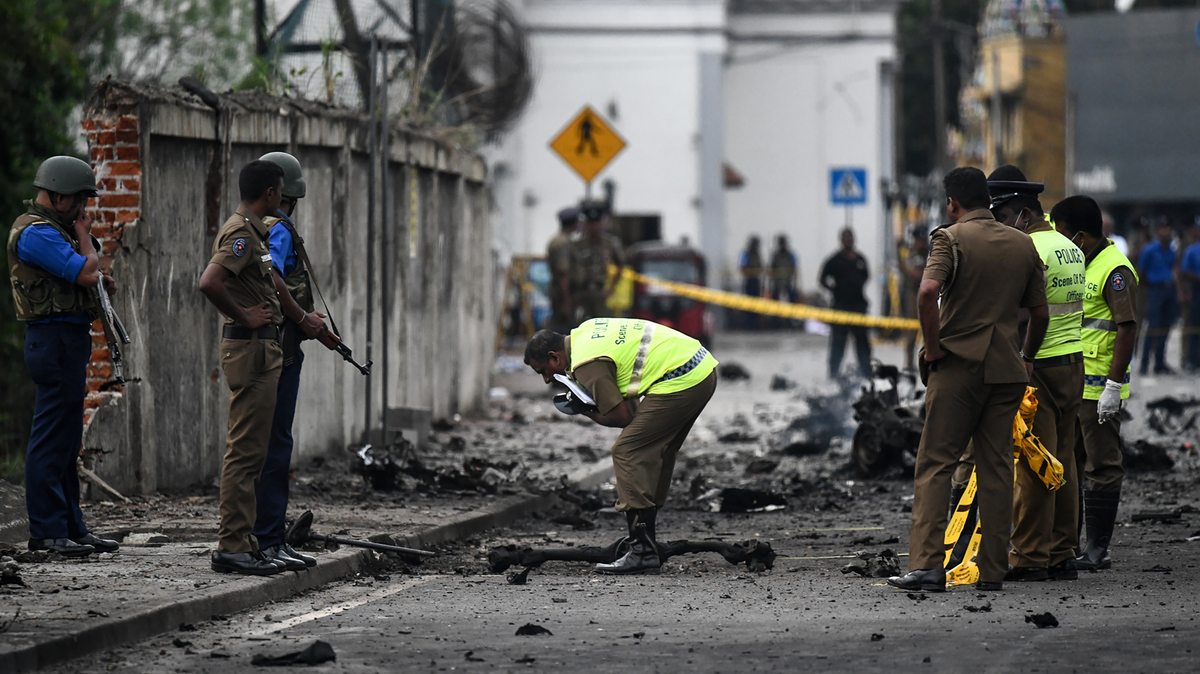 Sri Lankan security personnel inspect the debris of a van after it exploded on Monday near St. Anthony's Shrine in Colombo. More than 300 people died and more than 500 were wounded after Sunday's attacks on churches and hotels.

The Sri Lankan government has blamed the National Thowfeek Jamaath, a little-known Muslim militant group, for the coordinated attacks on churches and hotels that rocked the island nation on Easter Sunday.

"We do not believe these attacks were carried out by a group of people who were confined to this country," Senaratne said. "There was an international network without which these attacks could not have succeeded."

The radical Islamist group has been linked to the vandalism in recent years of Buddhist statues and has earned a reputation for being against Buddhism, the country's main religion.

At least one suicide bomber involved in the explosions previously had been arrested for defacing Buddhist statues and then released "on orders from higher authorities," according to Highways Minister Kabir Hashim, as reported in a local outlet.

No one claimed responsibility for Sunday's violence, but by Monday, police had arrested 40 suspects linked to the blasts, which took place at three prominent churches and three luxury hotels. They also said they found 87 bomb detonators at a bus station in Colombo, the nation's capital, according to media reports.

Among those arrested were the driver of a van allegedly used by the suicide bombers and the owner of a house where some of them lived, according to The Associated Press.

Another explosion occurred Monday near the bombed-out St. Anthony's Shrine in Colombo, after bomb disposal experts tried to neutralize explosives inside a parked van. No injuries were reported.

The day was filled with funerals — accompanied by military and police protection — after a night lit by candles for victims.

Residents hung flags outside St. Anthony's Shrine to mourn the dead. Flags of mourning also were strung outside the Negombo Grand Mosque, in a fishing town where a second church, St. Sebastian's, was targeted.

Sri Lankan President Maithripala Sirisena, who was not in the country during the attacks, declared April 23 as a day of national mourning. The government also said that it would compensate victims and support church reconstruction efforts, according to local media.

Victims of the attacks

More than 300 people were killed and more than 500 injured in the coordinated attacks.

Janaka Shaktivel, 28, went to a government morgue to identify his wife. "I recognised her body from the wedding ring that she always wore," he told Agence France-Presse. "I have no words to explain my feelings."

Photos: Easter Services Around The World

Celebrity chef Shantha Mayadunne and her daughter were killed in the blast at the Shangri-La hotel, according to Sri Lanka's Hiru News. Her daughter, Nisanga Mayadunne, had posted a photo on social media of the smiling family, writing, "Easter breakfast with the family."

Among the hundreds killed were 31 foreigners, Sri Lanka's ministry of foreign affairs said, with 14 people unaccounted for. They may be among the unidentified victims at the Colombo Judicial Medical Officer's mortuary, the ministry said in a statement.

One of them was Dieter Kowalski, 40, who had just arrived at the Cinnamon Grand hotel on a work trip when an explosion occurred, according to John Fallon, CEO of Pearson, where Kowalski worked as a senior leader of technical operations.

"Dieter was looking forward to an action-packed week," Fallon said in a statement emailed to NPR, adding that his colleagues described him as "big-hearted" and "full-spirited."

"And the fun begins," Kowalski posted Friday on Facebook before his flight. "Love these work trips. 24 hours of flying. See you soon Sri Lanka!" He posted again that he had arrived at 3 a.m. local time on Sunday.

Fallon said, "We're angry that a good man, who took simple pleasure in fixing things, has been killed, along with many others, by evil men and women who know only how to destroy. But in our anger and despair, we remember the words of Queen Elizabeth II in the aftermath of 9/11. Grief, she said, is the price we pay for love."

A student at Sidwell Friends School in Washington, D.C., was also among the U.S. citizens killed. Kieran Shafritz de Zoysa was in the fifth grade.

Ben Nicholson of the United Kingdom says his wife, Anita, and their son and daughter, aged 14 and 11, were killed when a bomb exploded at the Shangri-la hotel restaurant in Colombo. "Mercifully, all three of them died instantly and with no pain or suffering," he said, according to the BBC.

Danish billionaire Anders Holch Povlsen, known for making his fortune in fashion, lost three of his four children in the attacks.

Kyodo News, citing government officials, reported that a Japanese woman named Kaori Takahashi died while dining with her husband and child at a restaurant in Colombo.

At least eight Indians were also killed, the High Commission of India in Colombo announced Monday. That included several members of southwest India's Janata Dal-Secular political party who were on tour in the capital. The chief minister of the government of Karnataka identified five of them as Lakshmana Gowda Ramesh, K. M. Lakshminarayan, M. Rangappa, KG Hanumantharayappa and Sri Hanumaiah Shivakumar.

Three Sri Lankan police officers who were killed in a blast during the raid of a house were recognized for their work. "They have been posthumously promoted," said police spokesman Ruwan Gunasekara, according to The Hindu.

A curfew imposed Sunday night was reinstated in Sri Lanka for a second night.

The president's office announced a state of emergency beginning at midnight, a move that will give the police and military broad power to detain and interrogate people suspected of involvement in the attacks.

Interpol announced that a team — experts in crime scene examination, explosives, counterterrorism and victim identification — will begin Tuesday to help Sri Lankan authorities in their investigation.

But many worry about the intangible damage the attacks have caused for a country just 10 years past a violent civil war. Prime Minister Ranil Wickremesinghe expressed concern that the blasts could lead to political instability and called for an investigation into an intelligence warning that ministers never received.

Some observers are already calling it "a major failure by Sri Lanka's security establishment to prevent the carnage":

"President Maithripala Sirisena, who heads the administration, has repeatedly tried to oust [Prime Minister] Wickremesinghe, including through a failed constitutional coup late last year. 'This is a two-party government with two heads pulling in different directions,' one diplomatic source noted."