Accessibility links
Anaïs Mitchell's 'Hadestown' On Broadway: Greek Tragedy And Contemporary Strife The singer-songwriter turned her 2010 concept album into a folk-opera stage production and earlier this month, the show made its Broadway debut. 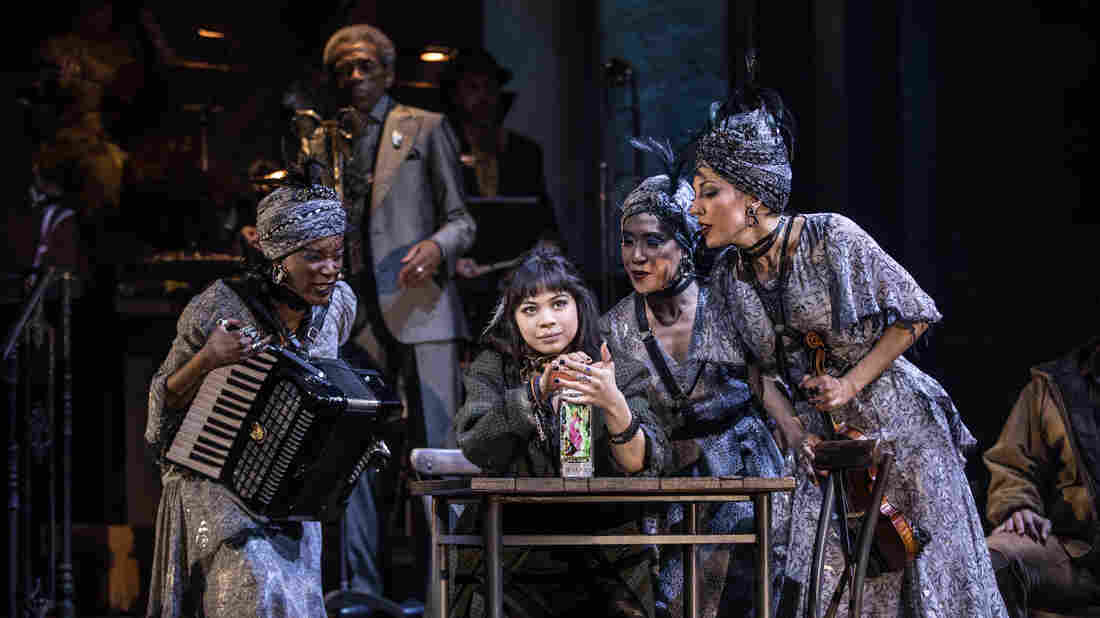 Eva Noblezada, who plays Eurydice, and the Broadway cast of Hadestown. Matthew Murphy/Courtesy of Hadestown, The Musical hide caption 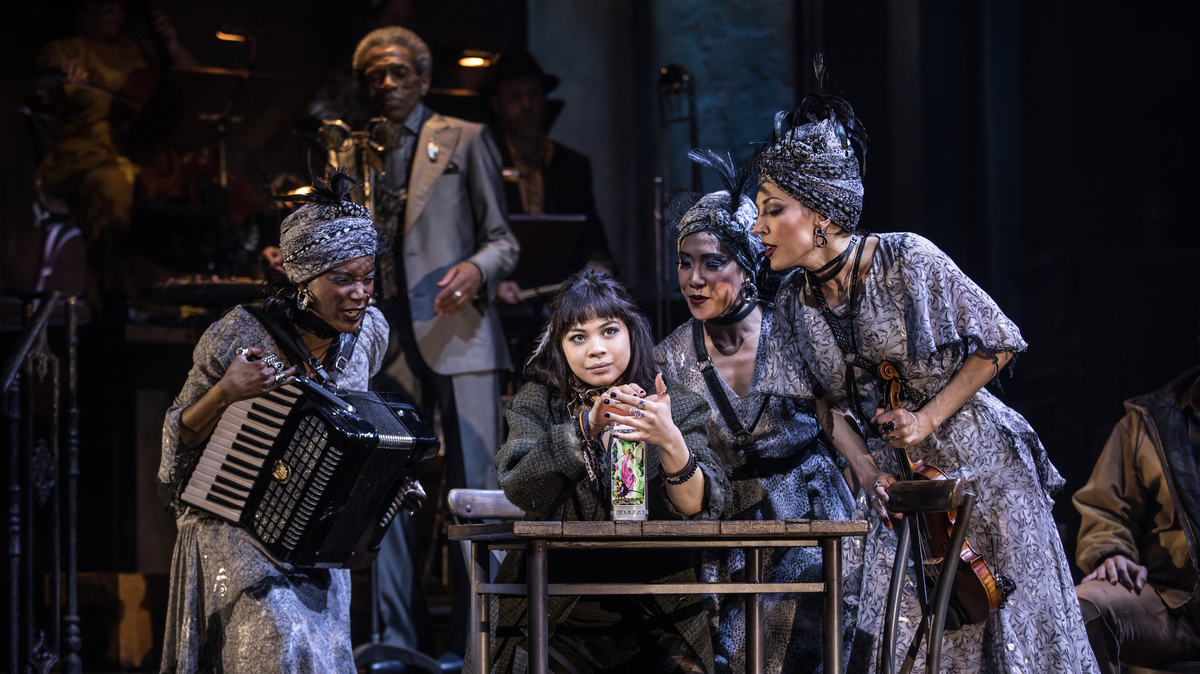 Eva Noblezada, who plays Eurydice, and the Broadway cast of Hadestown.

More than a decade ago, Anaïs Mitchell was running late for one of her shows. The singer-songwriter, in her 20s at the time, was trying to get from one gig to another and found herself lost. Along the drive, a song lyric popped into her head. "The lines that came were, 'Wait for me I'm coming. In my garters and pearls with what melody did you barter me from the wicked underworld,'" she remembers.

Those lyrics never made it into one of Mitchell's productions, but as the musician says, they pointed her to the story of Eurydice, the Greek myth that follows two lovers, Eurydice and Orpheus. Eurydice goes to the underworld and Orpheus follows to bring her back. In the story, Orpheus sings a song so sweet, it melts the heart of Hades.

Mitchell's fascination with this story has taken her on journey across mediums, one that is as winding as her hero's quest. She's turned these lyrics into a song, then a concept album in 2010 called Hadestown, stage productions in the U.S., Canada and London and on April 17, Hadestown finally opened on Broadway.

In Mitchell's DIY folk-opera, Mitchell makes some changes to the myth. In Mitchell's version, Eurydice chooses to go to the underworld.

"The underworld is a place of wealth and security, in contrast to the above ground world where there's freedom but it's also unpredictable and the weather is unpredictable," Mitchell explains. "And Eurydice makes a choice. She chooses the security of Hadestown, which comes with this kind of lifelessness. So she chooses kind of her gut. She chooses her stomach over her heart."

When tackling the show's climax, Mitchell admits it was no easy task to write a song that melts the heart of King Hades.

"I just can't tell you how many times I've rewritten it," Mitchell says. "I mean, there's just like sheets and sheets on the cutting room floor of the epics. It's totally ridiculous. But I think that what we hit upon a couple productions ago that took some pressure off and made a lot of sense is that the gift that Orpheus brings to King Hades isn't necessarily like the eloquence of his poetry. It's actually that he has channeled this melody." 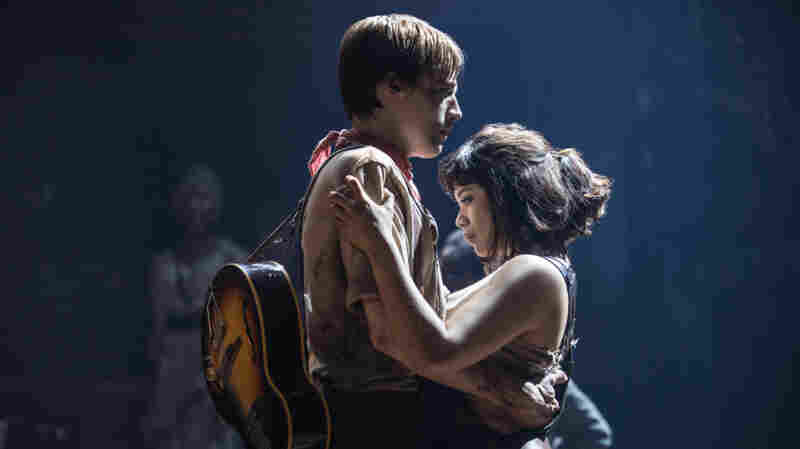 Reeve Carney and Eva Noblezada play Orpheus and Eurydice in the Broadway production of Hadestown. Matthew Murphy/Courtesy of Hadestown, The Musical hide caption 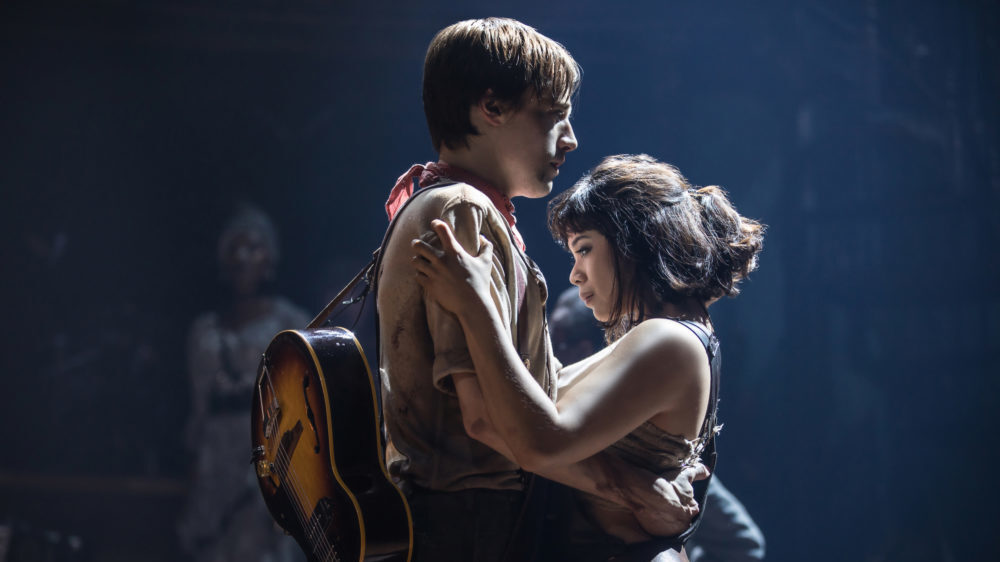 Reeve Carney and Eva Noblezada play Orpheus and Eurydice in the Broadway production of Hadestown.

As Mitchell explains, there's no words that approach the simple beauty of his melody. "He even says that to the king: 'There were no words for the way that you felt. So you open your mouth and you started to sing.'"

Mitchell's song "Build The Wall," was written in 2006 and appears in the production when Hades sings it, supported by this chorus of workers in the underworld. With today's current debate over border control, reality has caught up to the fiction Mitchell created.

"That was one of those songs that just felt like it was a gift, like, I didn't even know what it meant when it came," Mitchell says. "For so long, I've played that song. Then to start to hear that language during the campaign. Here we are and it's still happening ... I don't quite understand it. It feels like a collective unconscious weird thing. And I'm not the first person to write a song about a wall. There's many, but I think that it's like an image that speaks to people and it's an image that works well on people who feel scared."

Mitchell spoke with NPR's Ari Shapiro about the themes of Hadestown imitating life, the beauty of Greek tragedy and the road to Broadway. Hear their conversation at the audio link.