Accessibility links
Supreme Court Hears Oral Arguments Over 2020 Census Citizenship Question The justices are weighing whether the Trump administration can include a citizenship question on the 2020 census. A decision is expected this summer, when printing of the census forms is set to begin. 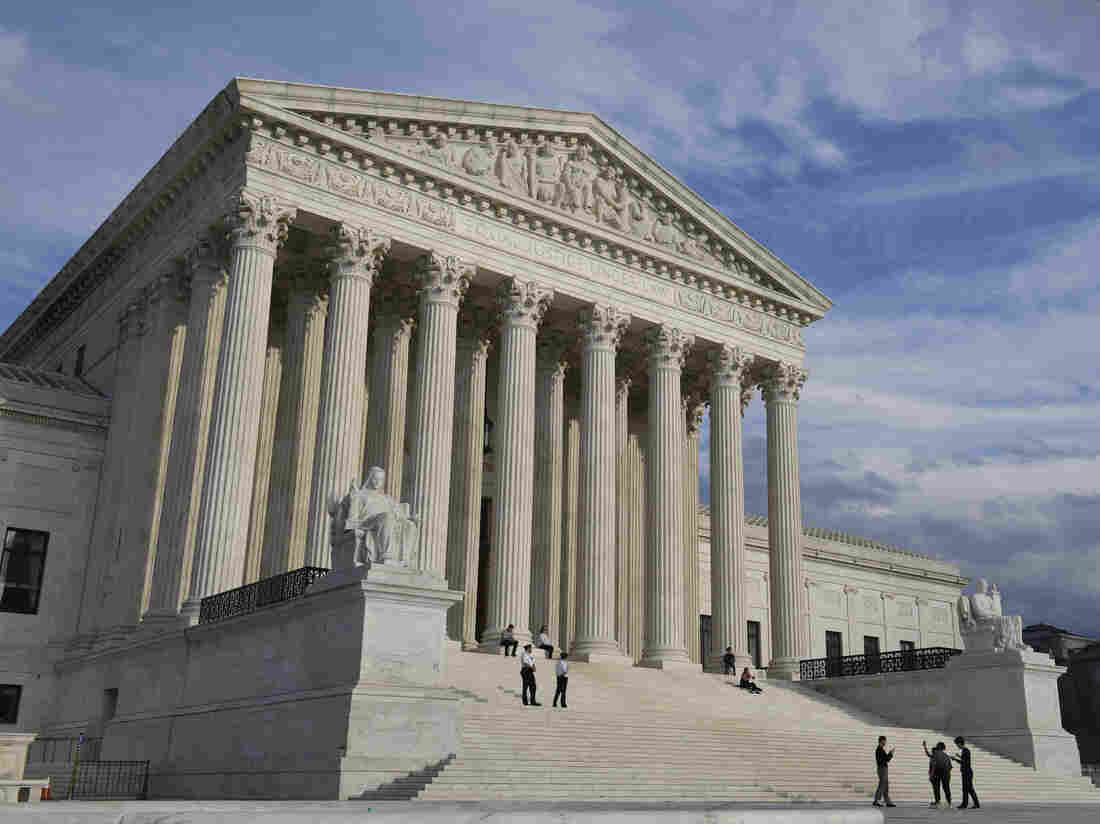 The Supreme Court justices are hearing oral arguments Tuesday over the citizenship question the Trump administration wants to add to forms for the 2020 census. Susan Walsh/AP hide caption 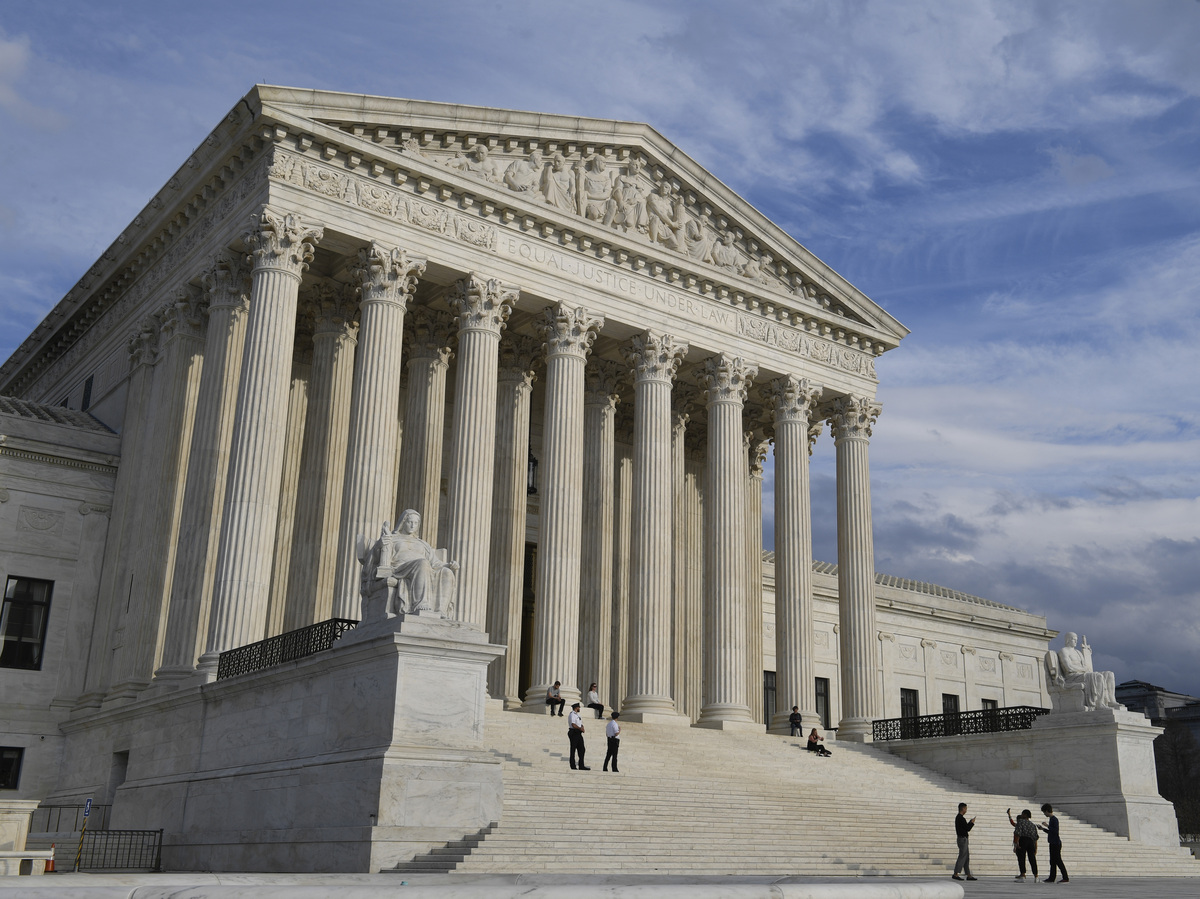 The Supreme Court justices are hearing oral arguments Tuesday over the citizenship question the Trump administration wants to add to forms for the 2020 census.

The justices of the U.S. Supreme Court appear split along ideological lines on whether a citizenship question can be included on forms for the upcoming 2020 census.

Based on their questions during Tuesday's oral arguments at the high court, the justices appear ready to vote 5-4 to allow the Trump administration to add the hotly contested questions to forms for next year's national head count.

"There's no doubt that people will respond less" to the census if it includes the question, Sotomayor said.

Justice Elena Kagan noted that the record of evidence for the case shows the need for a citizenship question is a "contrived one."

The conservative side of the bench, however, pointed to the discretion of Commerce Secretary Wilbur Ross, who oversees the Census Bureau.

Justice Brett Kavanaugh and Justice Neil Gorsuch nodded to the history of the U.S. census, asking questions about citizenship status in the past.

In multiple lawsuits brought by dozens of states, cities and other groups, three federal judges at U.S. district courts have issued rulings blocking the administration's plans for the question. It asks, "Is this person a citizen of the United States?"

All three judges — in New York, California and Maryland — ruled that Ross' decision to include the question violated procedures for adding new census questions under administrative law. The judges in California and Maryland have also ruled that adding the question is unconstitutional because it hurts the government's ability to carry out the constitutional mandate for a once-a-decade head count of every person living in the U.S.

Unclear motivation behind the question

Population counts from the 2020 census will determine how many congressional seats and Electoral College votes each state gets for the next decade. The data also guide the distribution of an estimated $880 billion a year in federal funding for schools, roads and other public services.

"This is not benign information," says Hermann Habermann, a former deputy director at the Census Bureau. "People's lives are going to be affected by it."

The Trump administration has maintained that Ross, who oversees the Census Bureau, added the question to collect more detailed citizenship data to enforce part of the Voting Rights Act. The district court judges, however, have all concluded that was not the real reason for the administration's last-minute push for the question.

"We've had the Voting Rights Act for 50 years. For its entire life, this data has not been available, and the Voting Rights Act has been enforced," says Andrew Pincus, an attorney representing former Census Bureau directors who have filed a brief in the Supreme Court, referring to citizenship data the Trump administration wants to collect from every U.S. household.

In fact, six of the bureau's former directors, who have served under both Democratic and Republican administrations, have warned that adding the citizenship question would jeopardize the accuracy of the population count.

"The issue isn't whether or not the administration or the United States has a right to know how many citizens are there," Habermann says. "The issue is what's the best way to get that piece of information so that you do not harm the census."

In the current political climate, Census Bureau research indicates the question is likely to discourage households with noncitizens, including unauthorized immigrants, from taking part in the count. The bureau estimates 6.5 million people will not respond to the 2020 census themselves if a citizenship question is included. That estimate may climb higher after the agency conducts its first field test of the question on a 2020 census form beginning in June.

Still, Ross overruled the unanimous advice of experts at the Census Bureau, who recommended compiling existing government records on citizenship from other federal agencies rather than adding a citizenship question. He later testified repeatedly before Congress that he added the question only because the Justice Department wanted it on the census form.

The litigation uncovered emails from Ross and other Commerce Department officials showing the idea for adding the citizenship question had roots not in the Justice Department, as Ross testified in Congress, but in discussions between Ross, former White House chief strategist Steve Bannon and former Kansas Secretary of State Kris Kobach, who helped lead President Trump's now-defunct voter fraud commission.

The emails also show that despite repeated entreaties, Justice Department officials refused at first to ask for the addition of the question, saying that it was unnecessary.

The limits of Ross' discretion

The Trump administration does have the support of 17 Republican-controlled states, including Oklahoma. That state's solicitor general, Mithun Mansinghani, notes that attorneys at the Justice Department, which is representing the administration, are arguing that the courts do not have the authority to second-guess the commerce secretary's decision about the census.

"The question is, does the secretary have the discretion to weigh the costs and benefits between asking a citizenship question and not asking one? And the department maintains he does have that discretion," Mansinghani says.

But Ross' discretion is not unlimited, argues New York State Attorney General Letitia James. Her office represented plaintiffs in one of the lawsuits at the New York district court under her predecessor.

"He has a constitutional and a statutory obligation to pursue an accurate count. And the record is clear, that by including the citizenship question, it would result in an inaccurate count," James says.

The administration contends that all it has to show is that Ross made a rational decision. The lower courts found that the decision, in fact, was not rational, but arbitrary.

The path to the Supreme Court

The Supreme Court is reviewing the ruling by U.S. District Judge Jesse Furman in New York — as well as whether adding the question is constitutional — in an expedited and complicated case.

It appears that Trump administration officials have long been preparing for the case.

"Since this issue will go to the Supreme Court we need to be diligent in preparing the administrative record," a Commerce Department official wrote to Ross in an internal email about the citizenship question sent in August 2017, months before the administration's formal request for the question became public.

The justices decided in February to take on a sped-up review of Furman's ruling after receiving an unusual request from the Trump administration to not wait for the 2nd U.S. Circuit Court of Appeals to review the administration's appeal.

A week before the first courtroom trial was scheduled to begin in November in New York, the administration's attorneys asked the high court to delay the proceedings. The administration wanted the justices to first rule on its separate appeal of Furman's order for Ross to sit for questioning under oath by the plaintiffs' attorneys. The Supreme Court ultimately denied that emergency request, with Justice Clarence Thomas, Justice Samuel Alito and Justice Neil Gorsuch dissenting from the majority vote.

Ross' deposition has been temporarily blocked by the high court. All of the justices are still considering whether to allow it to proceed.

Gorsuch and Thomas have indicated that they are not convinced there was enough evidence of "bad faith" to justify allowing the plaintiffs' attorneys to question Ross.

"There's nothing unusual about a new cabinet secretary coming to office inclined to favor a different policy direction, soliciting support from other agencies to bolster his views, disagreeing with staff, or cutting through red tape," Gorsuch wrote in an opinion released in October for Thomas and himself.

Furman said he ordered Ross' deposition mainly because he "found reason to believe that Secretary Ross had provided false explanations of his reasons for, and the genesis of, the citizenship question."

Tuesday's oral arguments lasted around 80 minutes, including time for the general counsel of the U.S. House of Representatives to argue against the question as a friend of the court in support of the lawsuits' plaintiffs.

The Census Bureau says it needs a final ruling on whether to include a citizenship question by June in order for the printing of paper forms for the census to begin this summer as scheduled. But a recent 4th Circuit appeal by plaintiffs in one of the Maryland lawsuits, who are challenging a ruling on a racial discrimination claim, could complicate the timeline.

If Congress provided additional funding, the bureau could extend its June deadline for finalizing census forms to as late as Oct. 31, the bureau's chief scientist testified during the New York trial.

That would, however, put yet more pressure on the head count, which is set to officially begin in January 2020 in remote Alaska before rolling out to the rest of the country by April.