Accessibility links
India Is Changing Some Cities' Names, And Muslims Fear Their Heritage Is Being Erased Officials have been altering names to become more Hinducentric. "It is very dangerous for national integrity and unity," says a historian. The changes accelerated ahead of this year's elections. 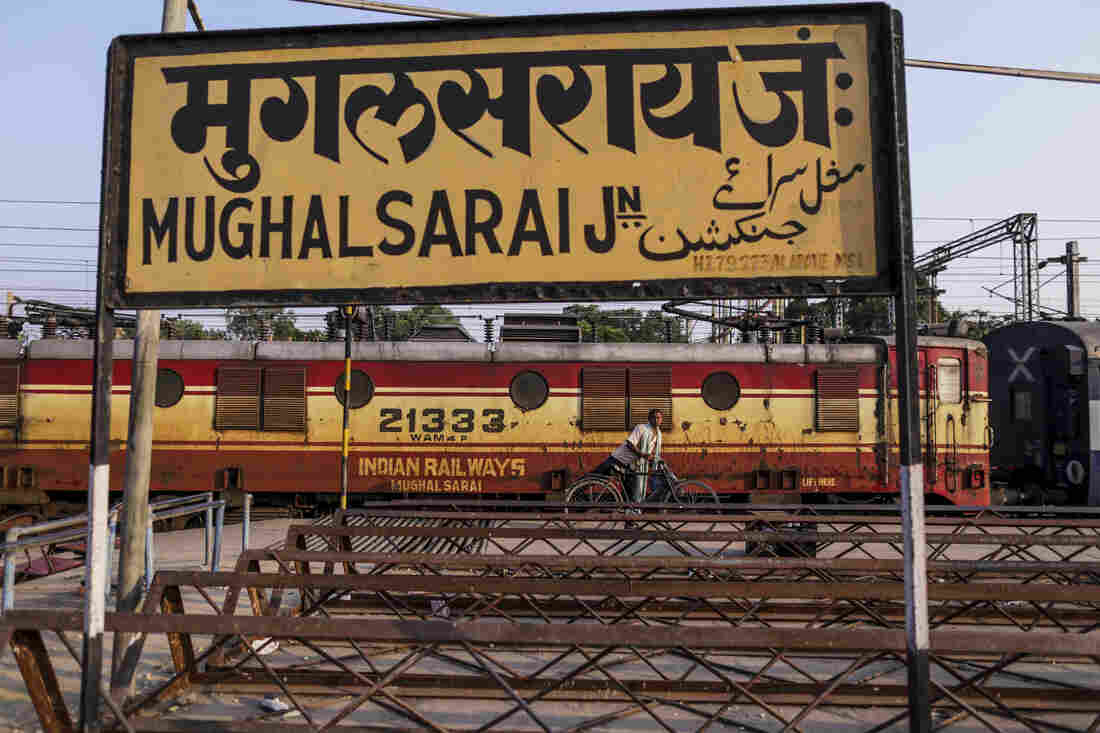 The name of India's Mughalsarai railway station, near Varanasi, was changed last year to Deen Dayal Upadhyaya, for a right-wing Hindu leader who died there in 1968. Dhiraj Singh/Bloomberg via Getty Images hide caption 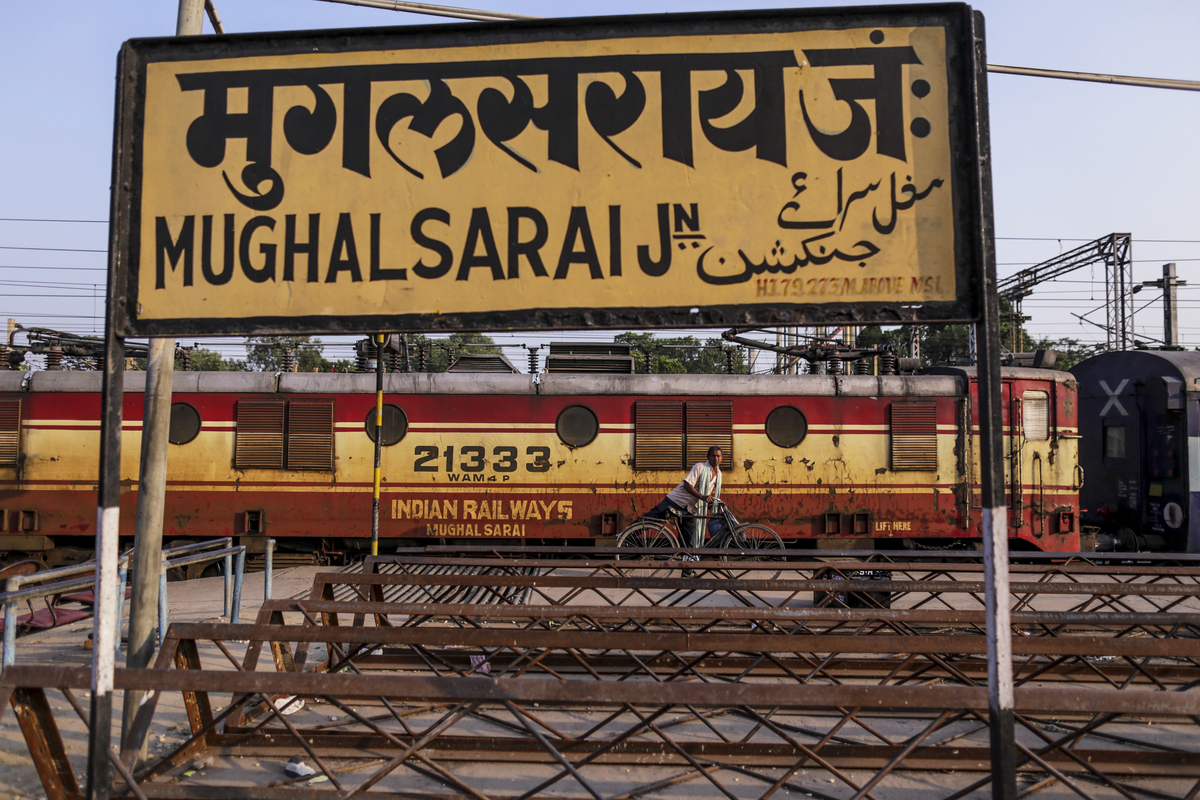 The name of India's Mughalsarai railway station, near Varanasi, was changed last year to Deen Dayal Upadhyaya, for a right-wing Hindu leader who died there in 1968.

Tens of millions of Hindus took a ritual dip in the Ganges River this winter as part of the largest religious festival in the world — the Kumbh Mela. For centuries, the festival has been held in various cities in northern India, including Allahabad.

But when pilgrims arrived this year for the Kumbh Mela, Allahabad had a different name.

Last year, officials from Prime Minister Narendra Modi's Hindu nationalist Bharatiya Janata Party changed the name of Allahabad to Prayagraj — a word that references the Hindu pilgrimage site there. The name Allahabad dated to the 16th century, a legacy of a Muslim ruler, the Mughal Emperor Akbar. "Today, the BJP government has rectified the mistake made by Akbar," a BJP official was quoted as saying when the name was altered. 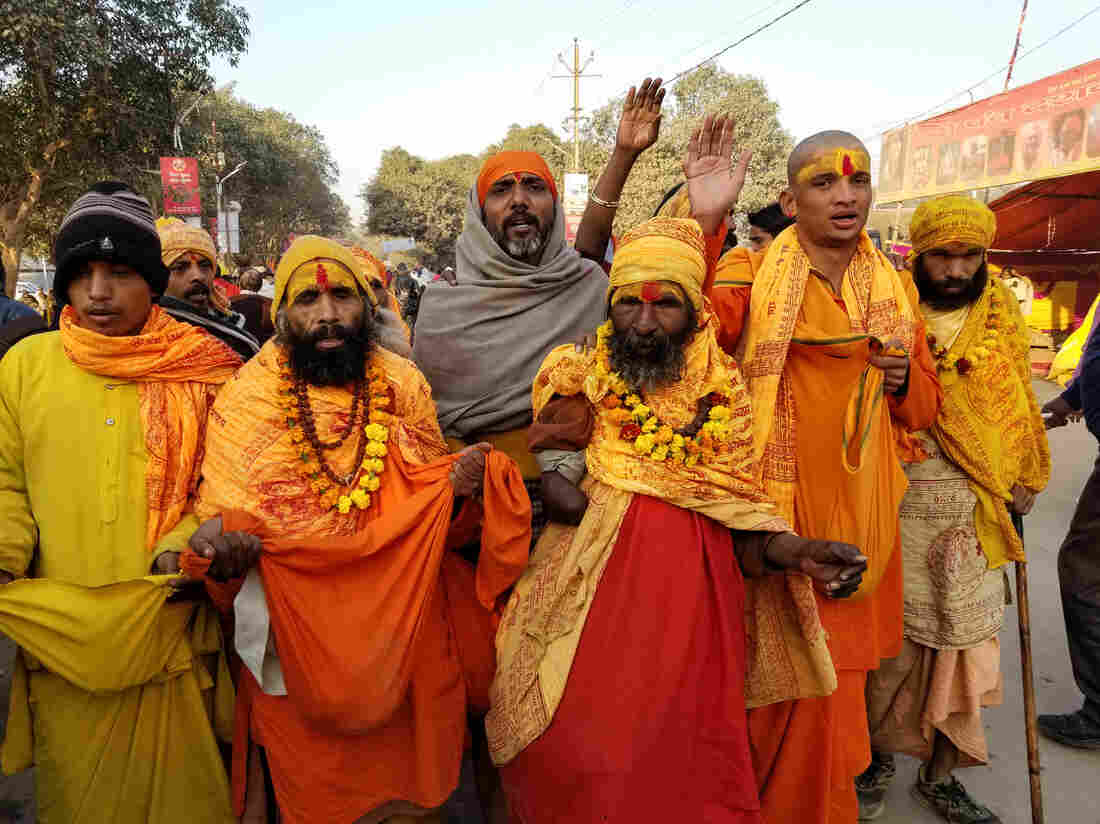 Hindu holy men sing and parade toward the banks of the Ganges River in January at the Kumbh Mela festival. Last year, the city hosting the festival changed its name from Allahabad to Prayagraj. Lauren Frayer/NPR hide caption 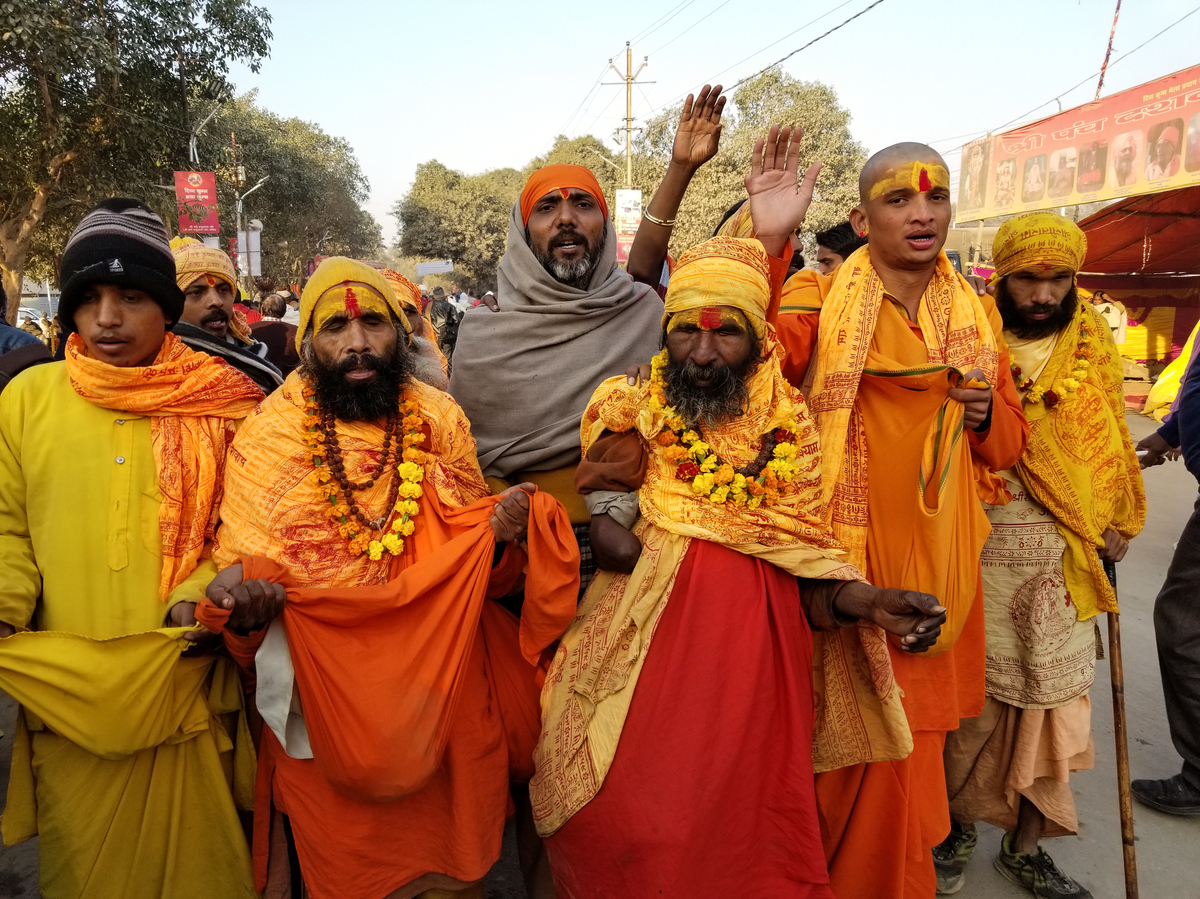 Hindu holy men sing and parade toward the banks of the Ganges River in January at the Kumbh Mela festival. Last year, the city hosting the festival changed its name from Allahabad to Prayagraj.

The name change has set off some bureaucratic confusion: The Allahabad High Court is keeping its name. So is the University of Allahabad. But the city's postmaster says he will soon change the signs outside the Allahabad Post Office to say Prayagraj Post Office — as well as all the rubber stamps inside.

Allahabad's renaming has made headlines not for the hassles of changing signs, but for a growing trend of Hindu nationalism in Indian politics. Over the past five years of Modi's term as prime minister, Hindu nationalist politicians from the BJP have renamed Indian towns, streets, airports and one of the country's biggest train stations, swapping names that reflect Muslim heritage for Hinducentric ones. In doing so, they are revising the map of India and trying to rewrite its history. 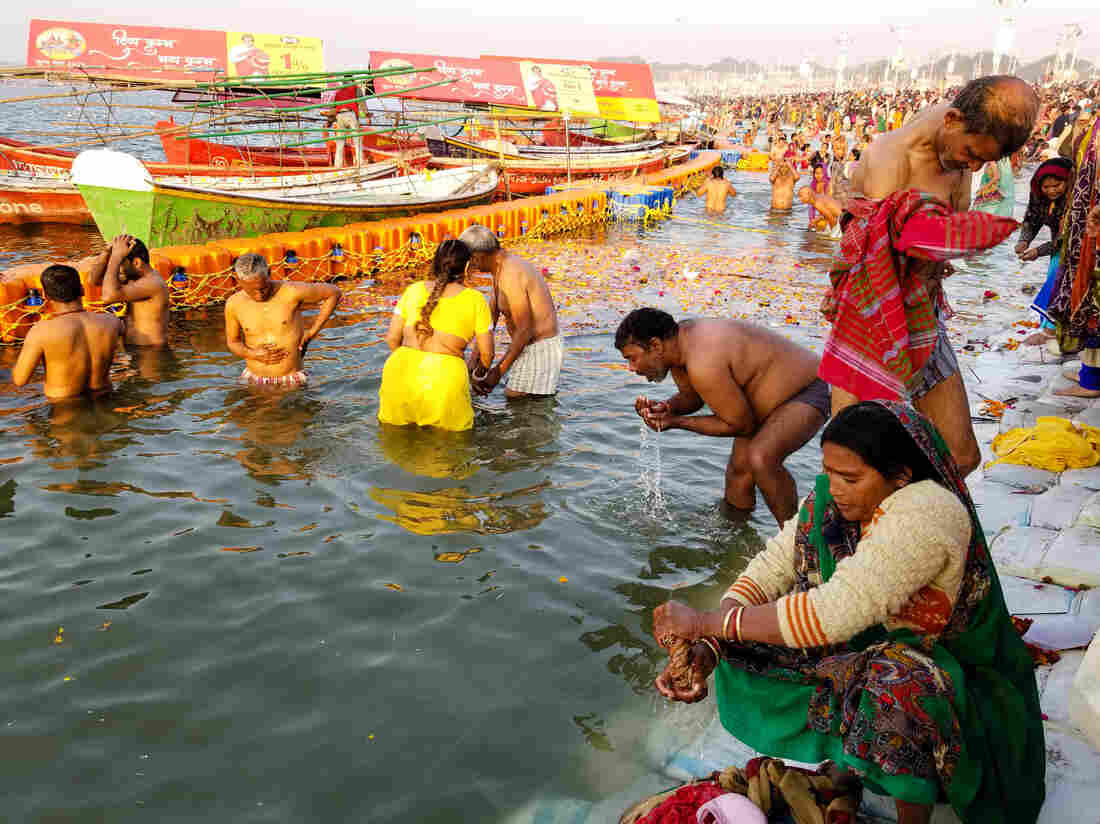 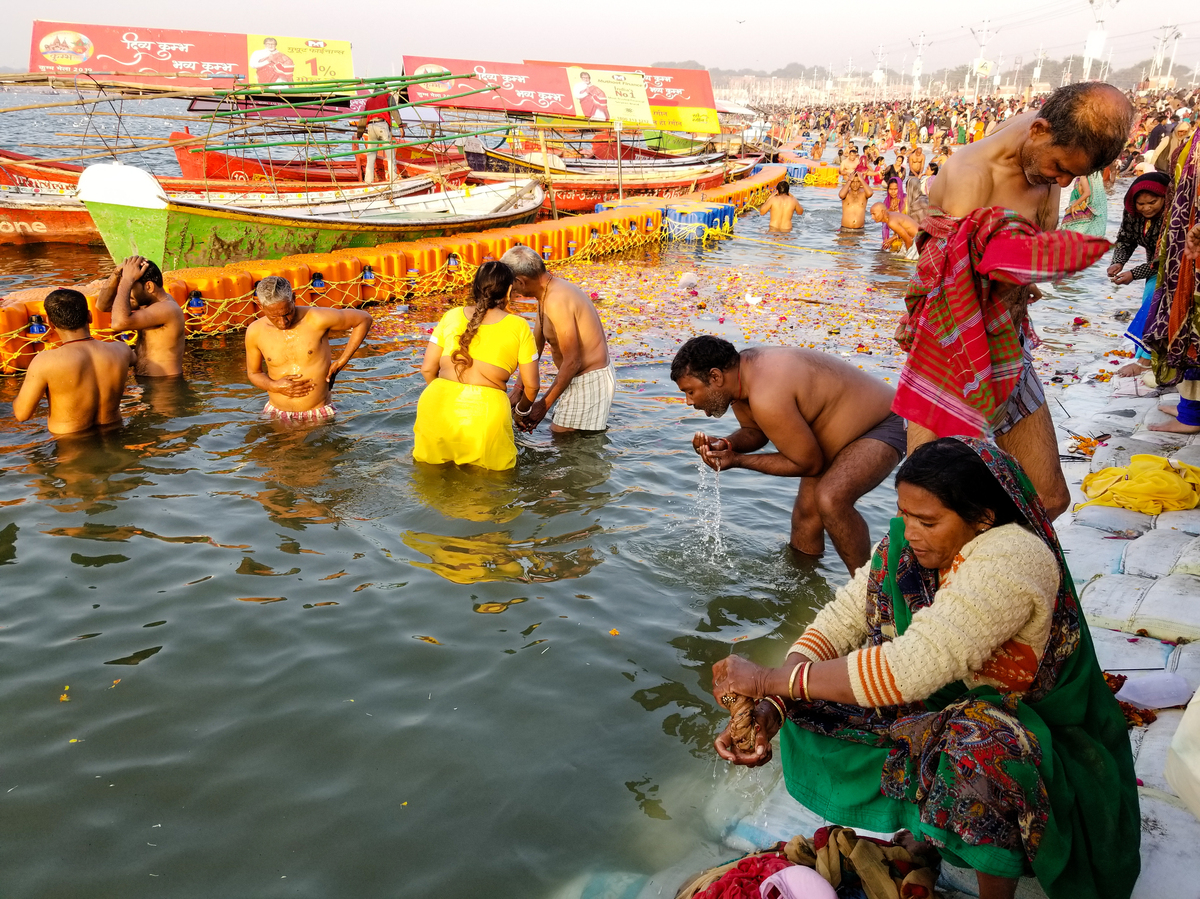 Hindu devotees bathe in the Ganges River in January at the Kumbh Mela festival in Prayagraj, formerly known as Allahabad.

A generation ago, long before Modi was in power, right-wing Hindu nationalist leaders in Maharashtra state renamed Bombay as Mumbai — a nod to the city's patron goddess Mumbadevi. Other cities followed: Madras became Chennai; Calcutta, Kolkata; Bangalore, Bengaluru. All the changes were a rejection of Anglicized names that came into use during British colonial rule.

The changes accelerated in 2018, ahead of this year's elections.

About 1 in 6 Indians is Muslim. After Hindus, they are the country's biggest faith group. In Allahabad, more than 20% of the city's population is Muslim. Many Muslims trace their lineage back centuries.

By changing the city's name, "It's basically our culture and heritage" that is eliminated, says Ashraf Ahmed, 30, a Muslim IT business owner who grew up in Allahabad. He still refers to his hometown by that name.

"We've lived for hundreds of years together — Muslims, Christians, Hindus and others. Many religions belong to India," he says, speaking in the shadow of his local mosque.

Then his voice drops to a whisper: "But Muslims are currently facing some problems from this government. It's a little bit tense."

Ahmed worries that erasing his hometown's Muslim name is a step toward erasing his own family history, his identity — ultimately disenfranchising India's Muslim citizens. 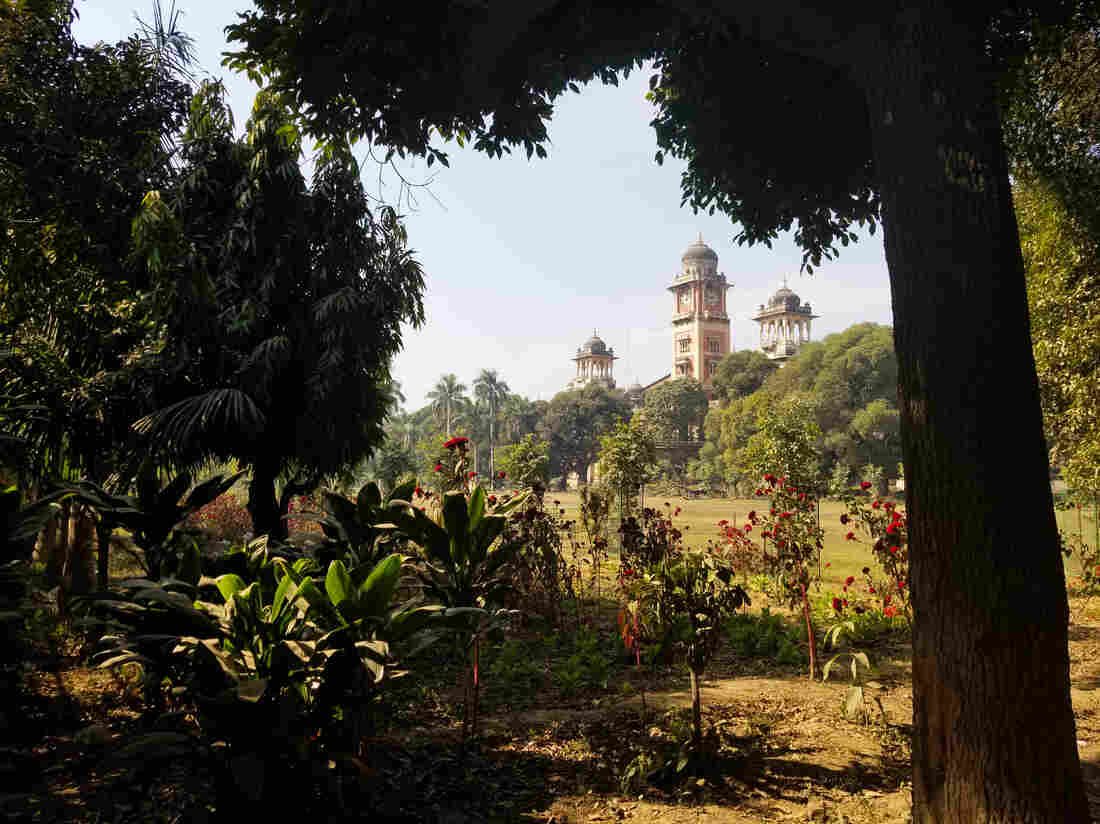 The renaming of Allahabad as Prayagraj, stripping the city of a name rooted in Islam, replaces it with a word that references a Hindu pilgrimage site in the city. But the University of Allahabad is keeping its original name. Lauren Frayer/NPR hide caption 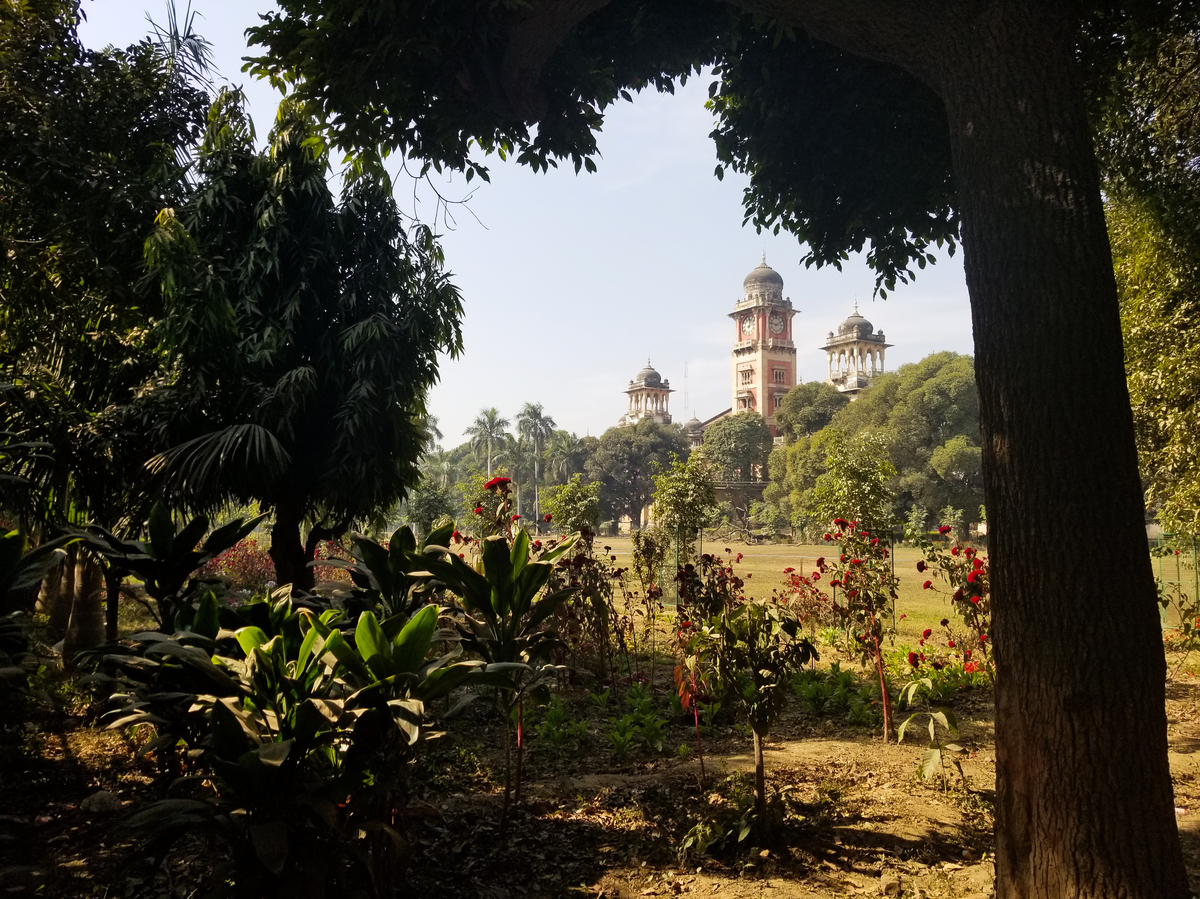 The renaming of Allahabad as Prayagraj, stripping the city of a name rooted in Islam, replaces it with a word that references a Hindu pilgrimage site in the city. But the University of Allahabad is keeping its original name.

The man behind Allahabad's name change and many others is Yogi Adityanath — a firebrand Hindu priest and chief minister of India's most populous state, Uttar Pradesh. (With more than 200 million residents, the state is bigger than many countries.)

Adityanath is a prominent member of Modi's ruling party and the founder of a Hindu youth militia. He has a reputation for inciting hatred against minorities, particularly Muslims. He has frequently railed against Muslims for allegedly committing what he calls "love jihad" — marrying Hindu women.

Adityanath is one of India's most vocal Hindu nationalists, seeking to redefine what it means to be Indian. He says the country's majority Hindu faith should be at its center.

"We cannot let Muslim invaders from centuries ago define us today!" Adityanath told a rally in 2014. Last year, he told reporters that anyone who questions his decisions about renaming Allahabad and other landmarks must not "know their history, know their traditions, nor have any idea of their rich culture."

His state is one of many that have banned beef, because cows are sacred to Hindus. It also has the highest number of violent incidents committed by cow vigilantes, who attack Muslims and lower-caste Hindus who trade in beef on the black market. Across 12 Indian states, at least 44 people — 36 of them Muslim — were killed in cow vigilante violence between May 2015 and December 2018, Human Rights Watch says. 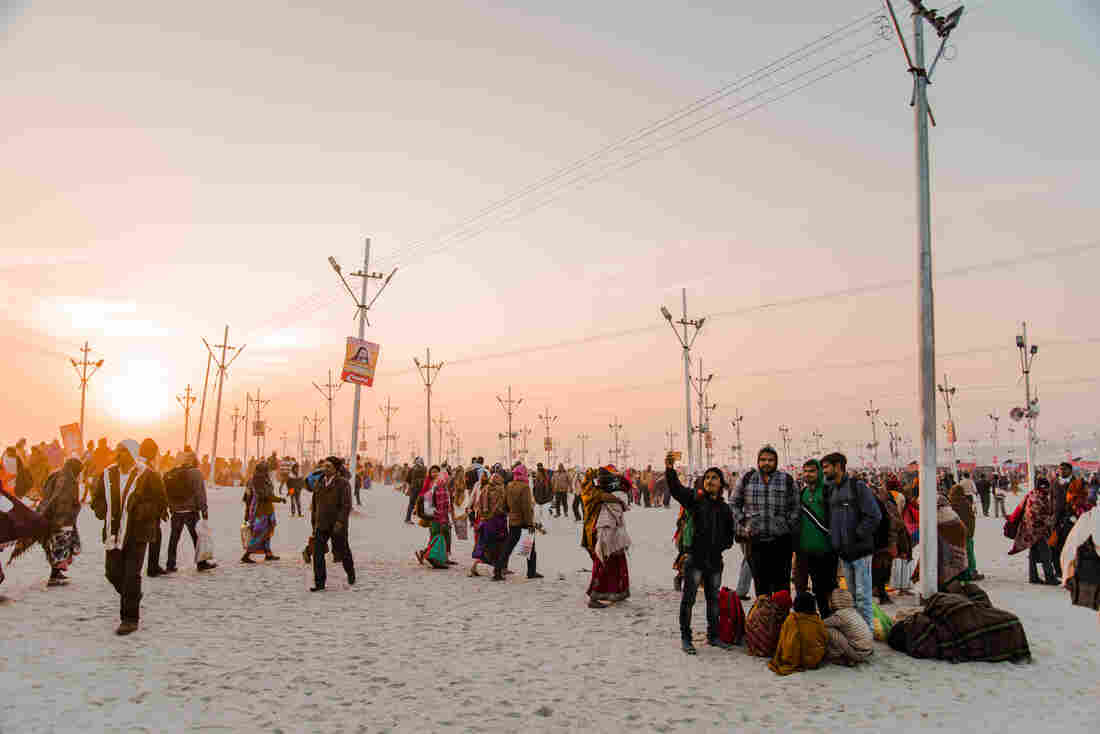 Pilgrims parade toward the banks of the Ganges River in January for the Kumbh Mela. Furkan Latif Khan/NPR hide caption 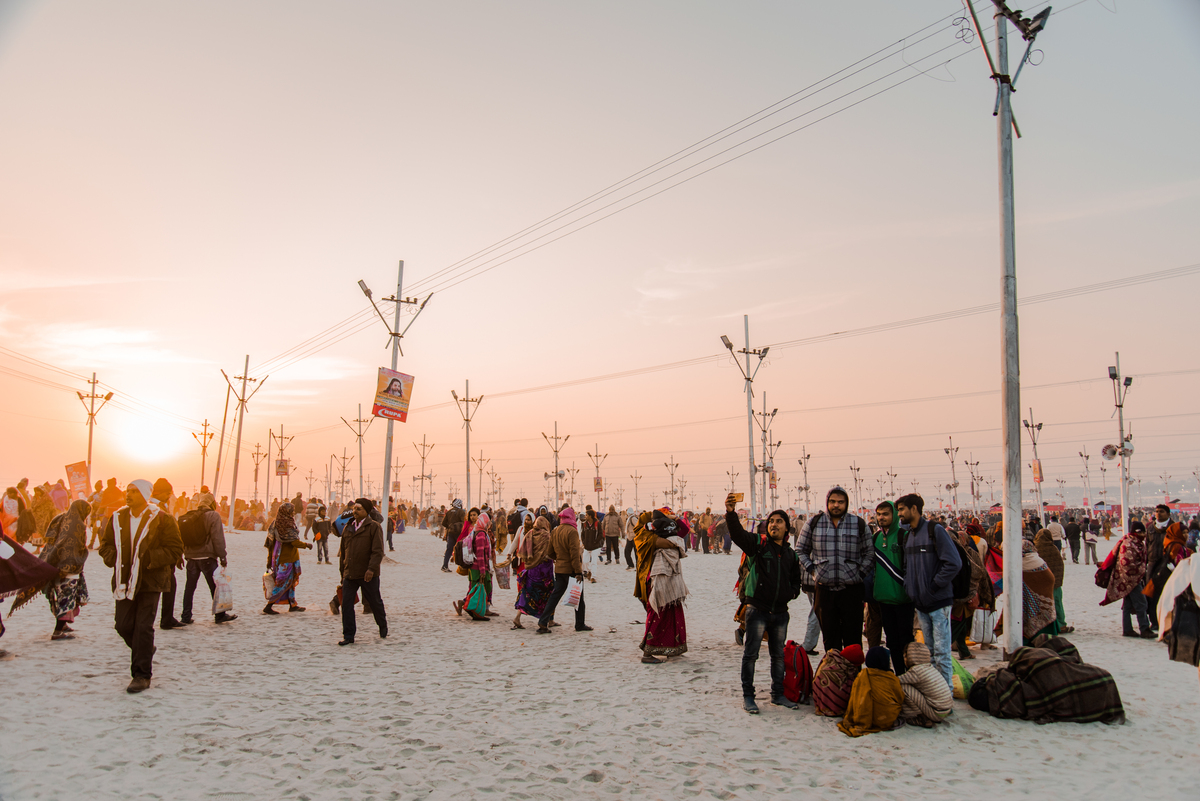 Pilgrims parade toward the banks of the Ganges River in January for the Kumbh Mela.

Rewriting history and the "dumbing-down of higher education"

The name change from Allahabad to Prayagraj has split the history department at the University of Allahabad.

"I was totally aghast!" says historian Heramb Chaturvedi. BJP politicians "are trying to polarize," he says. "It is very dangerous for national integrity and unity."

Chaturvedi opposes the city's name change on two counts: First, he believes the 16th century Mughal Emperor Akbar deserves credit for founding the city of Allahabad. Second, he believes that India, as a pluralistic democracy, should preserve its rich, multifaith history — and that diversity is its strength.

Look around this city, he says.

"You will find typical Mughal architecture, absolutely intact. It's beautiful! We are recognized as the country of Ashoka, of the Buddha and of Gandhi," he says. "And [Hindu nationalists] have never subscribed to this type of inclusiveness."

But Chaturvedi's supervisor at the university's Medieval and Modern History Department vehemently disagrees.

Department head Yogeshwar Tewari calls the city's name change a "course correction." He says for generations, even centuries, the way Indians interpret their own history has been tainted by colonialism and foreign influence. Only now, nearly 72 years after casting off colonial rule, can Indians see their own history clearly, he says.

"Yogi [Adityanath] decided to re-establish our lineage to the past — our heritage," Tewari says. "Until the 18th century, Muslim rule was here. It was their sway. It was their authority. They decided to impose what they felt was in accordance with their beliefs. But now it's time to celebrate our own."

By reinterpreting history, Tewari says, India is belatedly celebrating its Hindutva, or Hindu-ness. The push has been led by Modi's BJP.

The celebrating can sometimes fly in the face of facts. In January, there was an outcry at the Indian Science Congress after Hindu researchers presented work that dismissed Albert Einstein's theory of relativity as "a big blunder" and suggested that ancient Hindu gods invented airplanes and test-tube babies.

In this Hinducentric spin on history, some critics see the careful work of Hindu nationalist groups like the Rashtriya Swayamsevak Sangh, where Modi spent his formative years. The BJP is its political arm. The all-male Hindu volunteer corps' stated aim is to promote Hinduism in public life, but it has also stirred hatred toward minorities.

"Research bodies are being packed with RSS people who believe history is Hindu heritage studies, with a purpose to inculcate Hindu pride and warn against enemies of the nation," says Tanika Sarkar, a retired professor of history at Jawaharlal Nehru University in New Delhi. "Whether it's science or history, [they believe] we must talk about ancient Hindu values, Hindu inventions, Hindu science. There's been a general dumbing-down of higher education."

As Hindu nationalists reinterpret Indian history, even the country's most revered modern figures are coming under new scrutiny. The once-unassailable legacy of one of Allahabad's most famous native sons — Jawaharlal Nehru, India's first prime minister — is now a matter of contention.

Nehru, originally from Kashmir, grew up in Allahabad. He wanted India to be a secular, multifaith country. He was a close ally of the freedom leader Mohandas Gandhi. Together they helped write India's Constitution.

For decades, Nehru has been almost universally revered as one of India's founding fathers. His daughter and grandson became prime ministers and his great-grandchildren now lead the Indian National Congress, the main party in opposition to Modi's BJP.

But his vision has fallen out of favor with those in power. Adityanath recently blamed Nehru for decades of unrest in Kashmir. Modi said in 2013 that another figure should have been India's first prime minister.

Some believe even Gandhi's legacy is at risk. In 1948, Gandhi was murdered by a Hindu nationalist, Nathuram Godse, who had once belonged to the RSS. 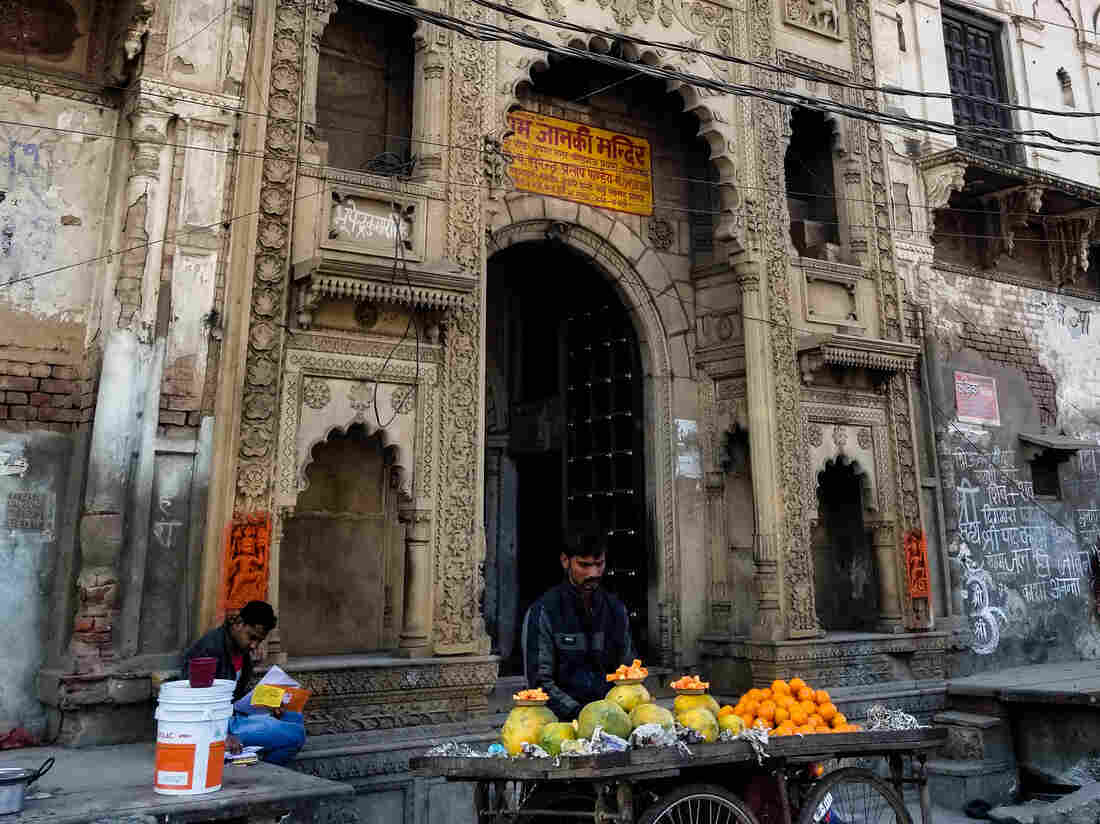 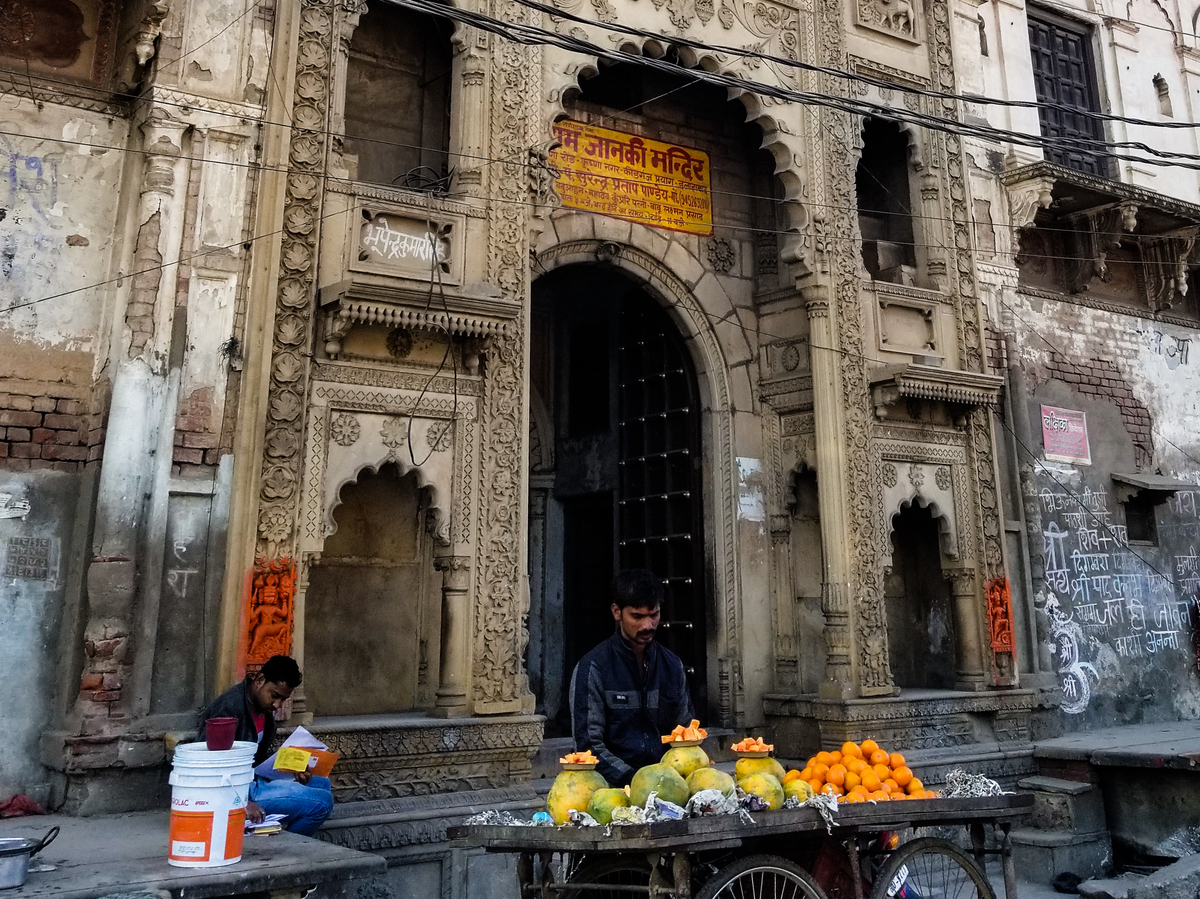 Mughal-influenced architecture is found throughout Prayagraj.

"Under the current BJP rule, there have been statues put up to his assassin, Godse," Sarkar says. "India is still known as the land of Gandhi, and they can't jettison him entirely. Gandhi believed the country belongs to all Indians."

On weekdays at the Allahabad Public Library — which has yet to change its name — there's a gaggle of patriotic 20-somethings studying to be civil servants.

"We always knew this as Allahabad. But to keep our [Hindu] culture alive, they renamed this place," says 25-year-old Sarita Jaiswal. "I agree with this new effort to remap areas and rewrite history. I want to work in government to be part of this."

If she passes her exams, she'll be part of a new class of civil servants, and they'll not just be renaming Indian cities and landmarks but reinterpreting Indian history through Hindu eyes. The changes they enact may be small. But over time, the consequences may be big.