Accessibility links
'Smells Like Teen Spirit,' Kurt Cobain's Anti-Anthem For Generation X Nirvana's culture-shifting hit mocked mainstream rock songs and wound up becoming one. But in his very ambivalence about success, Kurt Cobain captured something essential about growing up. 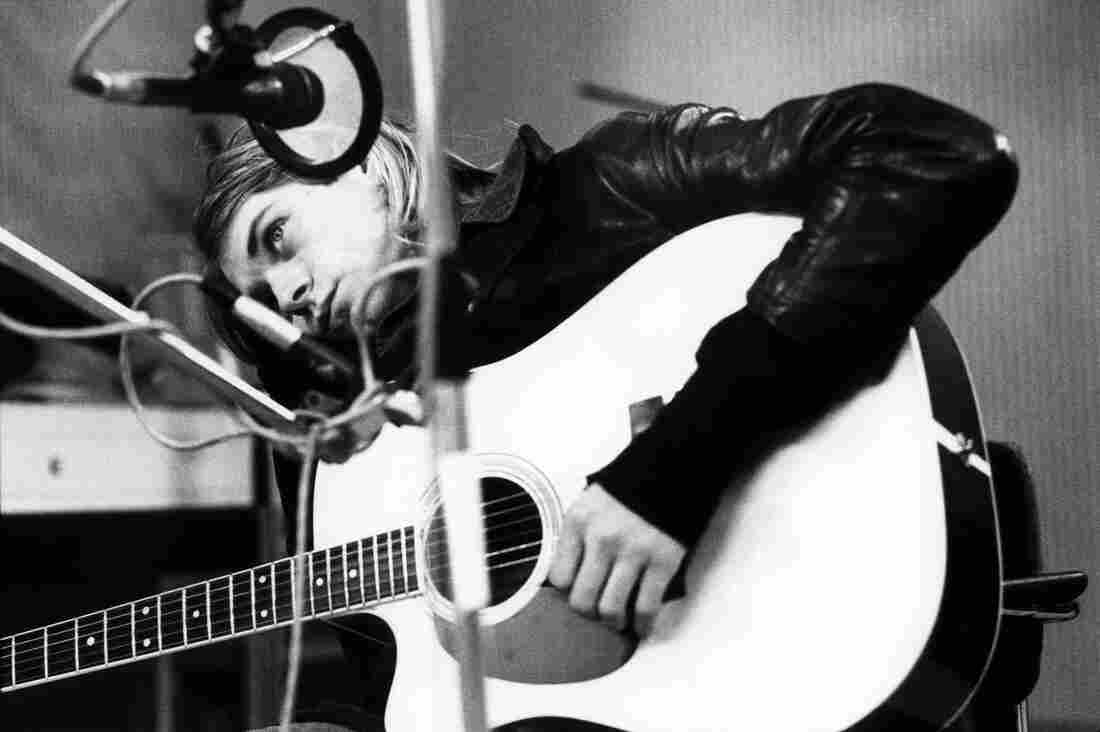 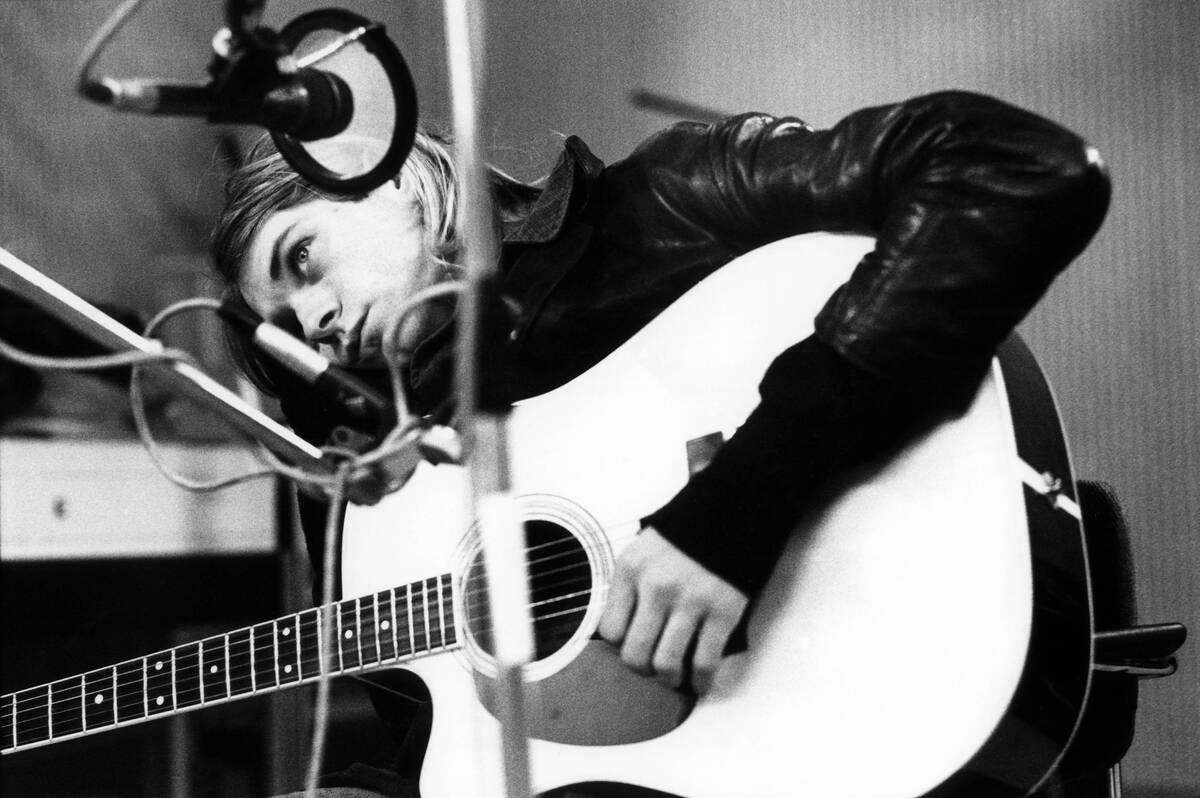 Kurt Cobain in the studio with Nirvana in late 1991.

There's a grainy video of the first time Nirvana played "Smells Like Teen Spirit" live, at a small club in Seattle in April 1991. Nirvana was largely unknown outside of punk and indie rock circles in the Pacific Northwest. The band hadn't even recorded the song yet, which meant that nearly everybody in the room was hearing it for the very first time.

Still, the reaction was intense.

"They started playing the new song and people erupted," says Jennie Boddy. She was a friend of the band and a publicist for Sub Pop Records, the indie label that put out Nirvana's first record, Bleach. "We were being slimed on by shirtless guys, just moshing," Boddy says. 'My friend Susan started hyperventilating, she thought it was so good: 'I can't, gasp, believe what they just played!' It was just instantaneous; it was crazy."

Within months, "Smells Like Teen Spirit" would make Nirvana famous around the world. The song forged an instant connection with Generation X — the generation sandwiched between baby boomers and millennials — which was deeply skeptical about the music and culture of its parents.

An anthem, in other words, for a generation that didn't want one.

"I just remember feeling as though it was this inescapable presence in my life," says Hua Hsu, a staff writer at The New Yorker. He was a 14-year-old in suburban Northern California when he first heard the song in September 1991.

The album Nevermind had just come out on a major label. "Smells Like Teen Spirit" was all over the radio. The music video, featuring cheerleaders with the anarchy symbol scrawled on their black uniforms, was in heavy rotation on MTV. Nine months after playing the song live for the first time, Nirvana was performing it on Saturday Night Live.

"Like millions of kids my age, this is the first thing that felt like it was mine," Hsu says. "As a teenager, I think you're really trying to figure out your place in the world. This song in particular felt so ambivalent about its own success."

Lyrics like "I found it hard, it was hard to find / Oh well, whatever, never mind" cut to the heart of Gen X, a group that includes this reporter. We were too jaded for a feel-good, sing-along anthem.

That was the genius of the song: It combined a fierce commentary on shallowness while still having a mass-appeal musicality.

" 'Smells Like Teen Spirit' is an unusual anthem because it refuses the role of the anthem," says NPR Music critic Ann Powers. "It's perfect for the generation it represented because this was a cohort that was so ambivalent about any traditional values [or] conventional success."

"People often will say, 'Well, they ushered in the new generation,' " Boddy says. "But what are you supposed to say? 'A mosquito, my libido.' That's the spokesperson."

Cobain often warned interviewers against reading too much into his lyrics.

"I was just using pieces of poetry and just garbage — you know, just stuff that just would spew out of me at the time," he told the Canadian TV channel MuchMusic in 1993. "A lot of times when I write lyrics, it's just at the last second because I'm really lazy. And then I find myself having to come up with explanations for it."

Danny Goldberg, Nirvana's former manager and author of the memoir Serving the Servant: Remembering Kurt Cobain, isn't convinced. "I don't believe that at all," he says. "I think he worked as carefully on the lyrics as he did on everything else."

Goldberg says the chorus of "Smells Like Teen Spirit" pulls off a tricky balancing act: mocking the culture of mainstream arena rock, while at the same time celebrating the joys of listening to your favorite underground band in a dimly lit club.

" 'With the lights out, it's less dangerous / Here we are now, entertain us.' It was rock and roll, and kind of an ironic commentary on rock and roll, at the same time," Goldberg says. "That was the genius of the song: It combined a fierce commentary on shallowness while still having a mass-appeal musicality."

Cobain's struggle with his own demons — including heroin addiction — ended in April 1994, 25 years ago this month, when he took his own life at age 27. By the end of Nirvana's time together, Nevermind had sold millions of copies — but the band had dropped "Smells Like Teen Spirit" from its live shows.

Cobain openly worried that the band was attracting the kind of fans he would have hated in high school. He championed feminism and gay rights, and he put this request in the liner notes for the album Incesticide: "If any of you in any way hate homosexuals, people of different color, or women, please do this one favor for us — leave us the f*** alone! Don't come to our shows and don't buy our records."

"Kurt Cobain was always questioning his authority, questioning his masculinity," Powers says. She adds that that may be one reason why "Smells Like Teen Spirit" still resonates — especially with teenagers.

"That experience, of warring impulses and of ambivalence, is the adolescent experience," she says. "It's exactly what teenagers go through when they are trying to come into their own authority and power, but they're also questioning everything around them and questioning their own self-worth. Kurt Cobain captured that adolescent feeling better than anybody of his generation."