Accessibility links
U.S. Virgin Islands Struggle To Recover From 2017 Hurricanes The new governor of the U.S. territory recently issued a mental health state of emergency, after two hurricanes in 2017 caused widespread trauma and stress among islanders. 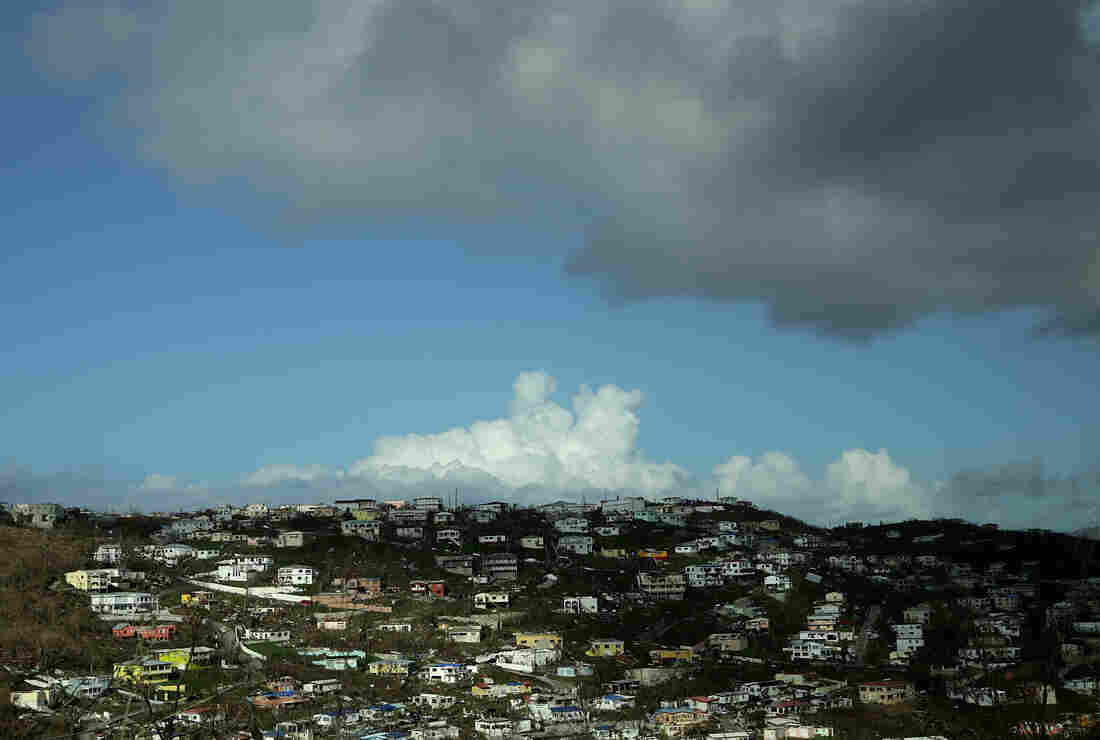 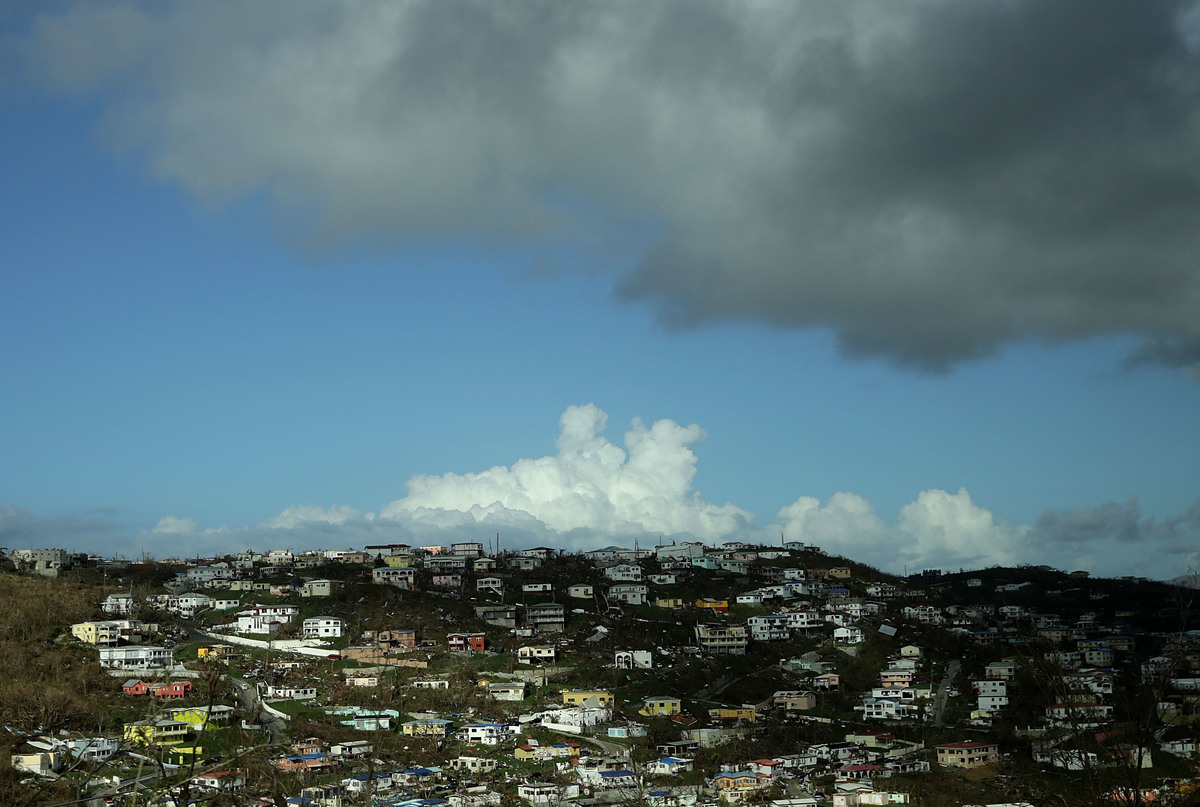 Damaged homes in the U.S. Virgin Islands dot the hillside on Sept. 17, 2017, more than a week after Hurricane Irma made landfall in Charlotte Amalie, St. Thomas.

More than a year and a half after two major hurricanes struck the U.S. Virgin Islands, the effects of the storms are still obvious. Many homes are uninhabitable. On others, blue tarps covering roofs are the only thing keeping the rain out.

But the storms had another, less visible impact: on the mental health of island residents. Vincentia Paul-Constantin, a mental health counselor who works with children in the public schools says, "We see ... regression in behaviors, especially with our little ones who had been potty-trained, reverted to using diapers." Among older children, Paul-Constantin says, "We see a lot of frustration, cognitive impairment, hopelessness and despair."

She traces it back to September of 2017, when two Category 5 hurricanes struck the U.S. territory within a two week period. On St. Croix, St. John and St. Thomas, many people lost their roofs and most of their possessions. Much of the islands went for weeks without power, running water or a reliable food supply. A woman who lived through it says, "It was a bit frustrating to have to go through such a traumatic experience after the hurricanes, not having access to anything."

We see a lot of frustration, cognitive impairment, hopelessness and despair.

Because of concerns about her privacy, she asked that we not use her name. In some ways she says, the storms and recovery were even harder on her 6-year-old son. He was starting school at a chaotic time. Because many buildings were damaged, schools doubled their enrollment, and went to two sessions a day, with each session lasting four hours. Her son, she says, was overwhelmed and unable to adjust. "He was pretty much disoriented," she says. He's getting counseling now and it's helped. But many children have more serious problems.

Schools returned to their normal schedule in October. With the disruption of the hurricanes and a year of shortened class days, Principal Lisa Ford at Cancryn Junior High School in St. Thomas says students have fallen behind where they should be. And behavioral problems, always present, have gotten worse. "Where it would be one or two children," Ford says, "now it is 10 children in the classroom acting up and you're trying to settle all these children. We're also seeing an increase in children that need mental health assistance." 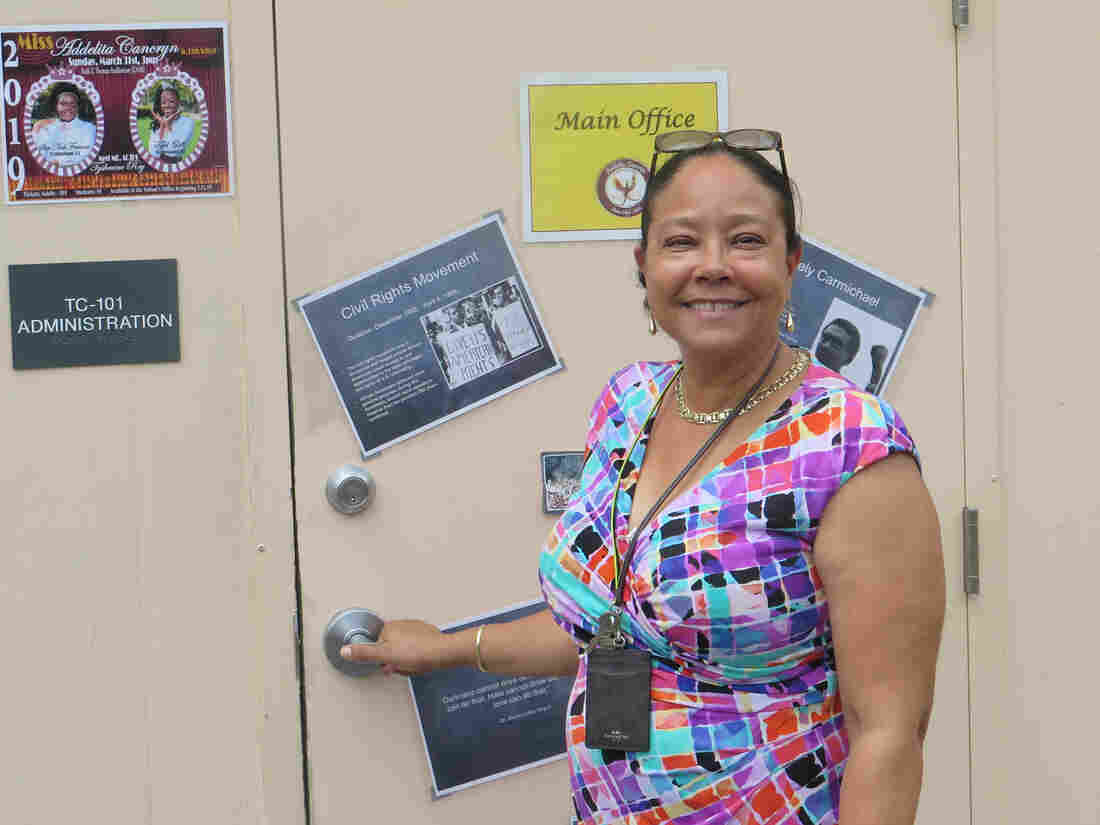 At Cancryn Junior High School, principal Lisa Ford says since the hurricanes, there has been an increase of children with behavioral problems in need of counseling. Greg Allen/NPR hide caption 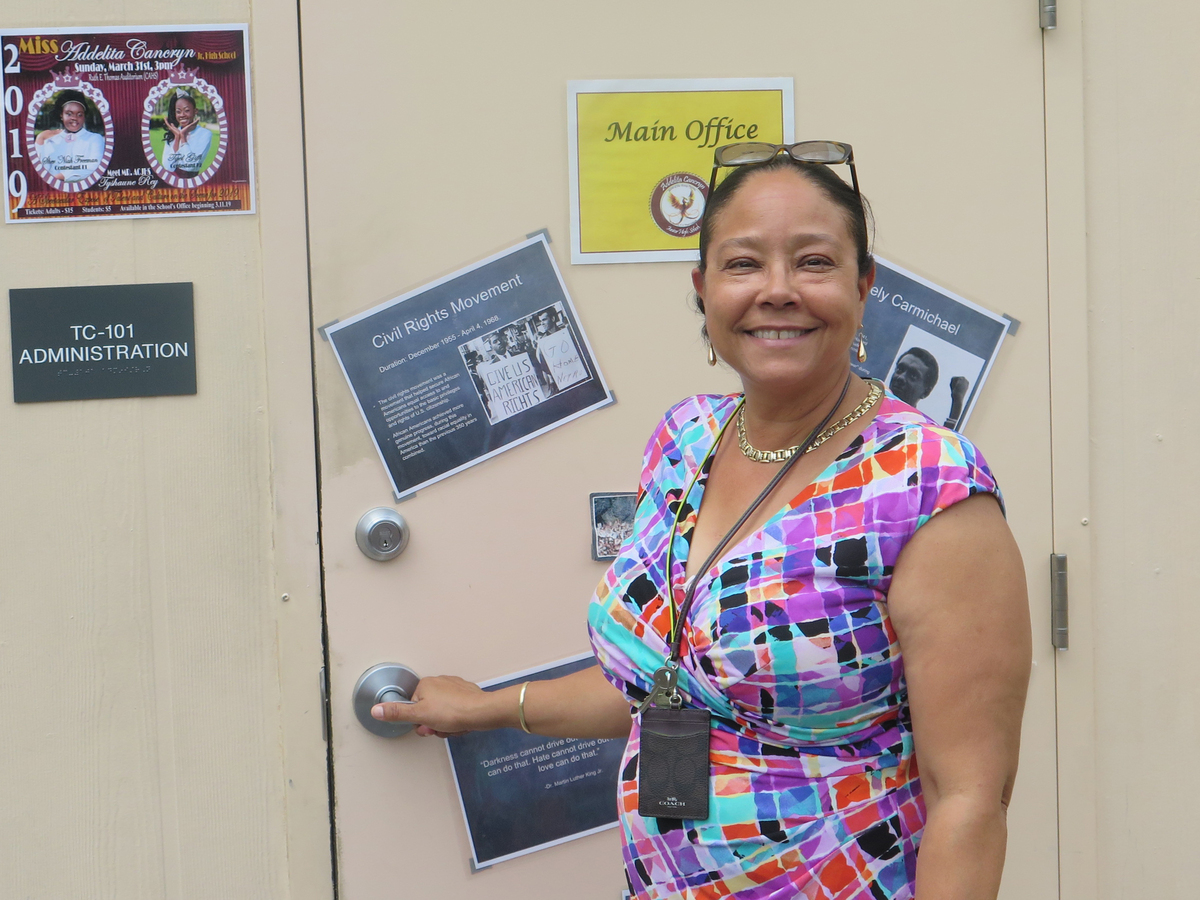 At Cancryn Junior High School, principal Lisa Ford says since the hurricanes, there has been an increase of children with behavioral problems in need of counseling.

Ford says she doesn't know if it's because of the hurricanes, the slow recovery, or all the free time students had last year when they were on a half-day schedule. She sees the behavioral issues in a variety of ways: "They show up in defiance, actual defiance to authority. We have children who are sleeping in the middle of the day ... You try to wake them up, they become angry. And maybe that's what we're seeing — a lot of anger and defiance."

It has caused extreme hardship. That equates to stress. Stress equates to depression, anxiety. It's like a floodgate has been opened up.

In the days and weeks after the hurricanes in 2017, counselors did outreach at churches, schools and at FEMA centers, working to reach people who needed help in a community that's traditionally been reluctant to talk openly about mental health. Dionne Simmonds, a counselor with Insight Psychological Services, says there's been a big response. "The storms," she says, "ha[ve] literally woken up mental health issues here in the territory and ... people are now seeking help."

Simmonds says many of the problems she sees are related to economics and the high cost of everything after the storms, from food to fixing your roof. "It has caused extreme hardship," she says. "That equates to stress. Stress equates to depression, anxiety." Since the storm, she says, "It's like a floodgate has been opened up." 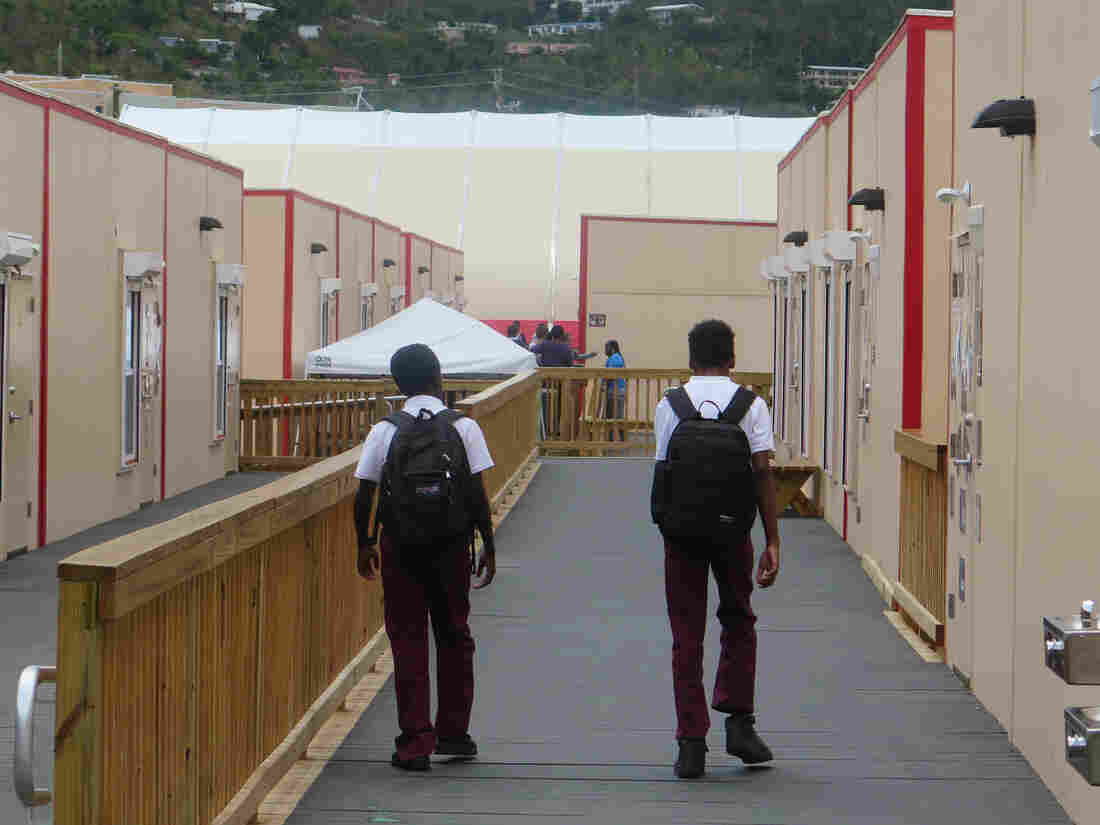 After a year of shortened classes, students at Cancryn Junior High School are now back to full days in temporary modular classrooms. Greg Allen/NPR hide caption 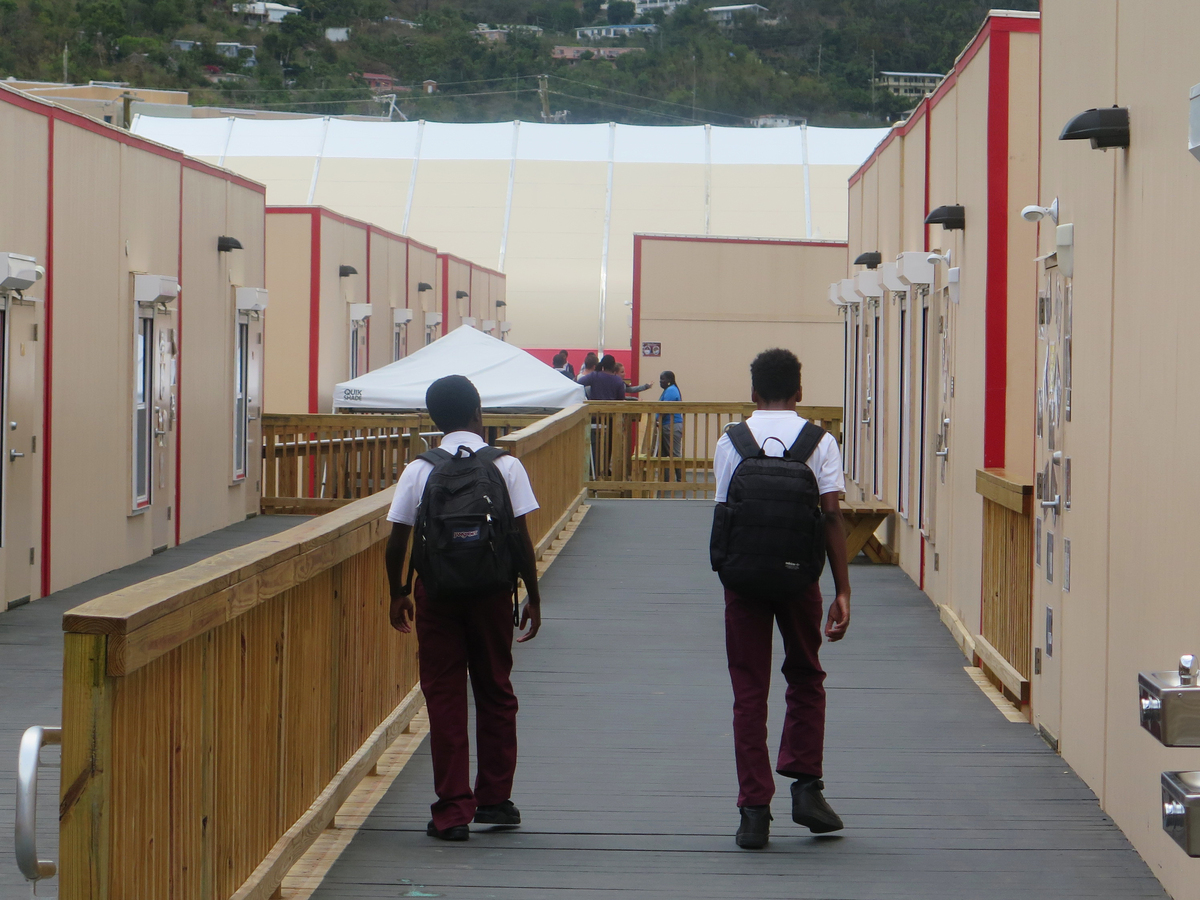 After a year of shortened classes, students at Cancryn Junior High School are now back to full days in temporary modular classrooms.

Recent surveys of mental health in the U.S. Virgin Islands confirm what counselors and teachers are seeing. One study, funded by the Community Foundation of the Virgin Islands, found that stress from the hurricanes and the recovery is a significant health issue throughout the U.S. territory.

Noreen Michael, a researcher with the University of the Virgin Islands in St. Thomas, says the levels of depression and post-traumatic stress they found were startling. "We're looking at six in 10 with depressive symptoms," she says. A similar percentage of residents display symptoms of Post-Traumatic Stress Disorder, PTSD.

Those are the figures for adults.

Among the children surveyed, more than 40% had symptoms of post-traumatic stress more than a year after the storm. Gloria Callwood, another researcher, says their findings are backed up by what they heard from teachers. "When there was weather, when the wind was blowing," Callwood says, "that's when the younger kids become more clingy. That brings back the memory of the trauma they experienced."

Noreen Michael says another survey of high school age students after the storms was even more disturbing. "We saw some pretty high percentages of students who said they had thought about suicide," she says.

The most recent Youth Behavior Risk Survey of the U.S. Virgin Islands, which has not yet been published found that, among students in seventh through twelfth grade, one in 12 reported they'd attempted suicide. More than one in five said they'd thought about it.

Those are pretty close to the national figures on suicidal thoughts among adolescents. But in the U.S. Virgin Islands, a close-knit community where mental health isn't often discussed, researchers suspect the real numbers may be even higher.

Lori Thompson, a psychologist who sees patients at St. Thomas' hospital, says in the first six months after the storms, there was a significant spike in suicide attempts. For many, she says it was related to the aftermath. "People lost their jobs," she says. "A lot of them lost their housing, their support network. The stressors in their lives magnified to such an extent that they just felt they couldn't cope anymore." 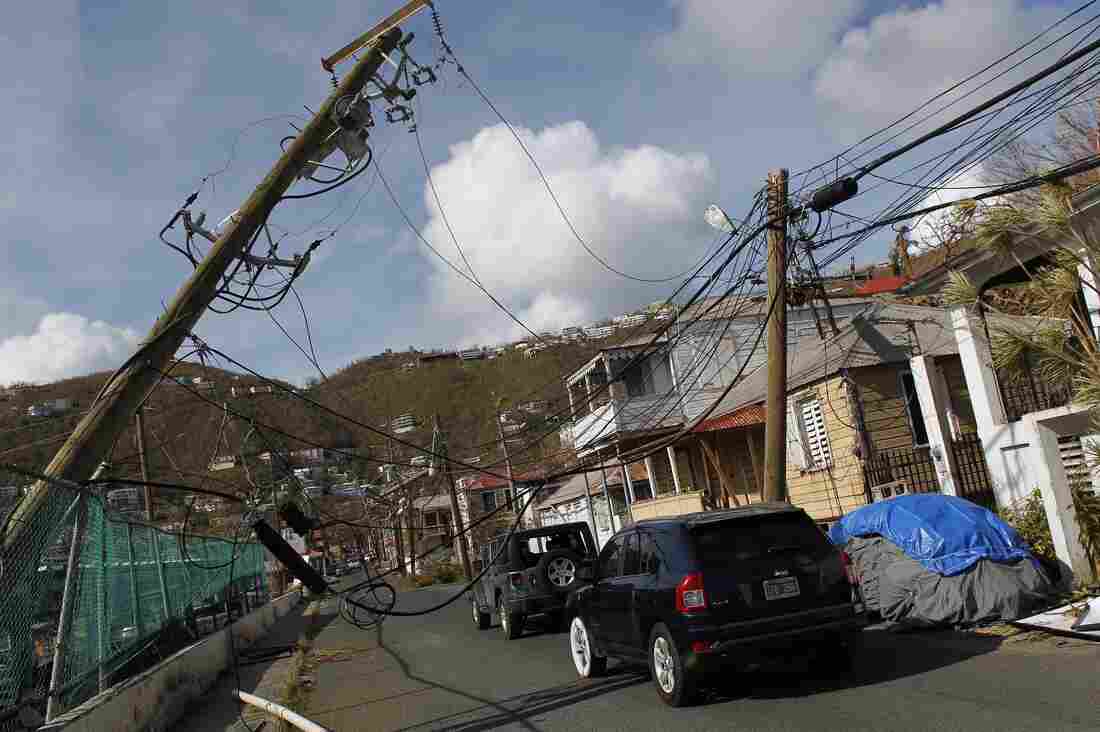 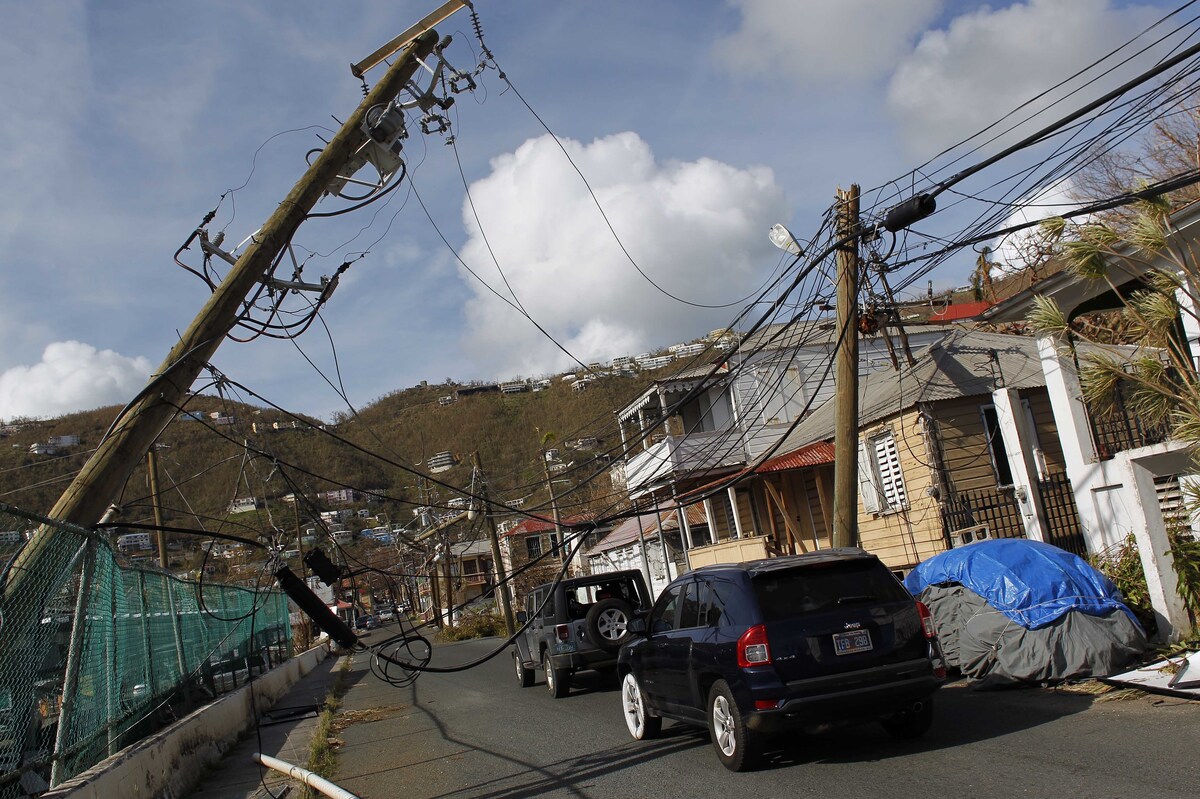 Thompson and other mental health professionals say they've been overwhelmed by the demand for counseling and psychiatric care. Even before the storms, the area was woefully understaffed in regards to mental health with just one full-time and one part-time psychiatrist for the entire territory.

Albert Bryan, the U.S. territory's new governor, says mental health in the Caribbean on the whole is, "not something that we've had real discussions about." Since the storms, the need has become critical, leading him to declare a mental health state of emergency. The order is intended to expedite recruiting and hiring of mental health professionals.

In many ways, the U.S. Virgin Islands is the paradise visitors see, with its beaches, palm trees and friendly people. But Bryan says the fact is, it can be difficult to live in an isolated community where costs are high, many live in poverty and hurricane recovery slowly drags on.