Accessibility links
ISIS Claims Responsibility For Easter Sunday Bombings In Sri Lanka The group's news agency posted video Tuesday that purports to show the attackers. Sri Lanka's government is being criticized for not preventing the bombings, despite getting prior intelligence. 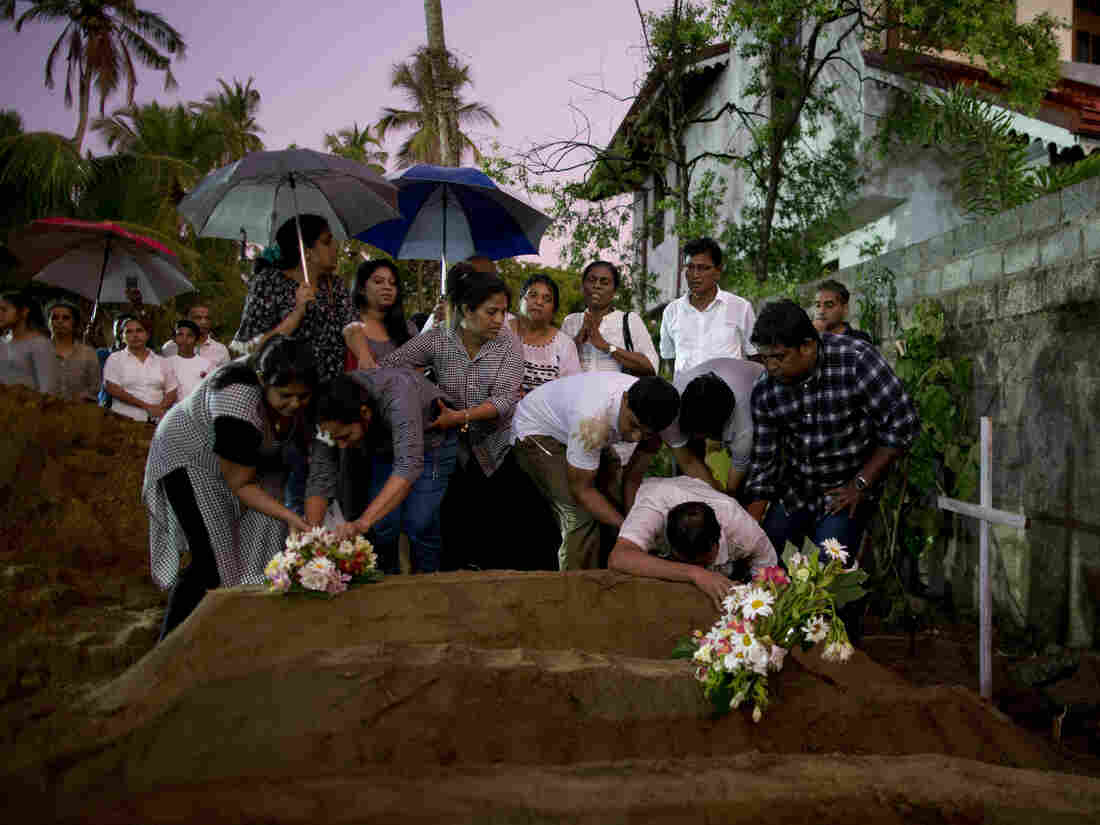 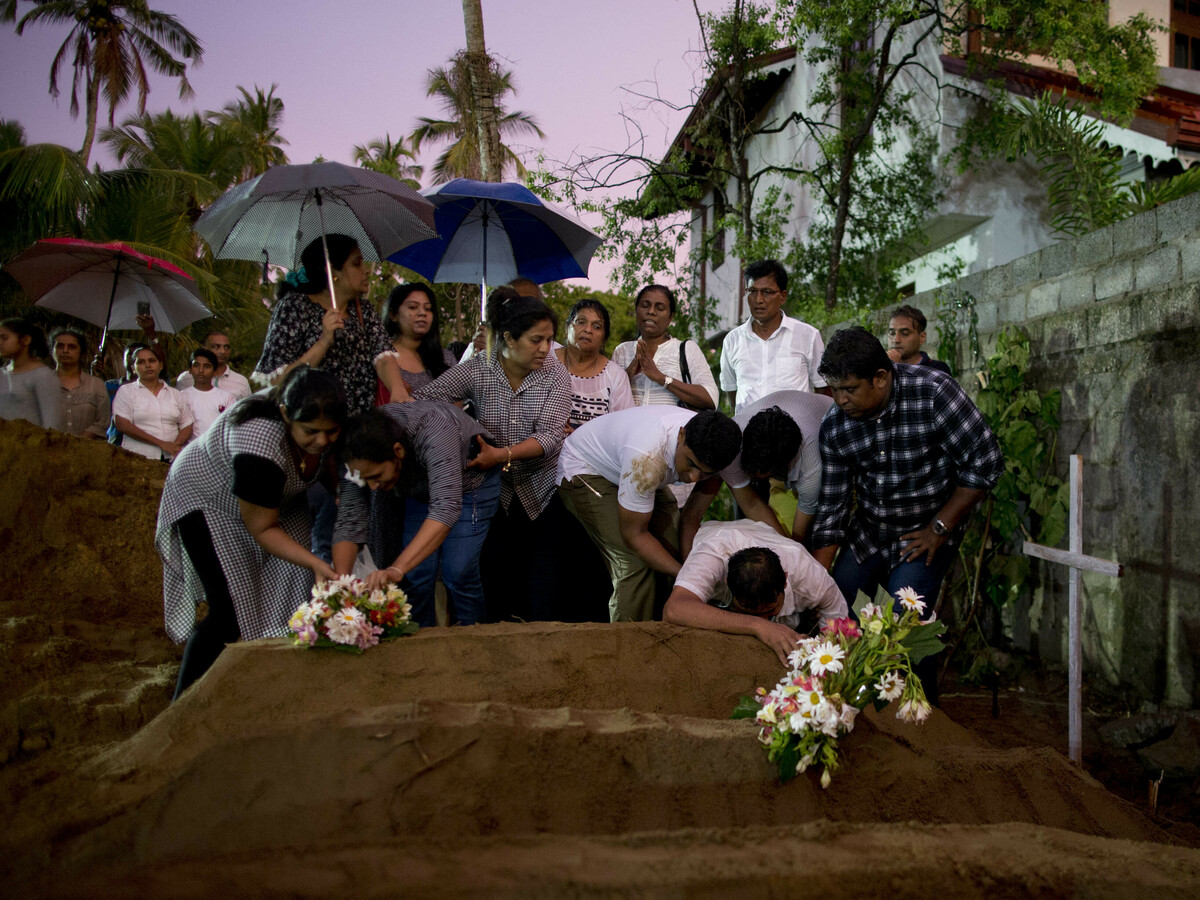 Relatives place flowers after the burial of three family members who died in an Easter Sunday bomb blast at St. Sebastian Church in Negombo, Sri Lanka, on Monday.

The Islamic State has claimed responsibility for the devastating Easter Sunday bombings in Sri Lanka, according to a posting by the group's Amaq news agency Tuesday.

Without offering evidence of its involvement, the group commonly known as ISIS said the suicide attacks that killed more than 320 people were carried out by "fighters of the Islamic State."

Amaq also released photos and a video that it said showed eight attackers — including a segment in which the men are seen standing in front of the group's black flag, pledging allegiance to ISIS leader Abu Bakr al-Baghdadi. Those images couldn't be independently verified.

As expected, ISIS has just released video of the attackers in #SriLanka giving bayah (oath of allegiance) to Baghdadi.

I'm going to do something I've never done before and post a short clip, because almost none of my Sri Lankan contacts have access to ISIS channels on Telegram. pic.twitter.com/cmlzfD0Fmh

Counterterrorism analysts who monitor ISIS note that the group has previously made seemingly opportunistic claims about high-profile attacks, such as the mass shooting in Las Vegas in 2017 that was carried out by a 64-year-old Nevada man whom authorities say acted alone.

The Sri Lanka blasts have confounded international terrorism monitors. The country is not known as a hotbed of Islamist militancy and a local jihadist group Sri Lankan authorities have named in the attack – National Thowheed Jamath – has a history of vandalizing Buddha statues but not of the kind of large-scale bloodshed seen Sunday.

Experts have suspected an outside hand in the operation because of the sophistication required to carry out an attack involving multiple suicide bombers deployed to different targets at around the same time.

The ISIS claim emerged shortly after a Sri Lankan government official said Sunday's coordinated suicide bombings in the island nation were carried out in retaliation for last month's mass shooting at mosques in New Zealand.

Sri Lanka's state minister for defense, Ruwan Wijewardene, said the attacks were carried out by two Islamist organizations, including National Thowheed Jamath. As NPR's Lauren Frayer reports, "it's not immediately clear how he knows that – whether the information comes from suspects being interrogated, or evidence the suicide bombers may have left behind."

Health Minister Rajitha Senaratne has called for the top police official to resign after failing to stop the attacks despite receiving reports that the group was planning to target churches, The Washington Post reports.

In the weeks leading up to the attacks, parts of the Sri Lankan government received intelligence reports from international agencies, including India, indicating a possible plot to attack targets in Sri Lanka. Government officials have apologized for failing to act on those warnings.

"What the allegation is, is that portions of the government — the security services, the police — did not do enough in advance to alert the Christian community, to alert hotels that they could be targets," Shashank Bengali, Southeast Asia correspondent for the Los Angeles Times, told NPR's Up First. "That's where the war of words and the finger-pointing has got us right now."

I'll only add what I heard from Chaminda Kamal, a 42-year-old shopkeeper whose mother-in-law died in Negombo: "The current government must answer for this. The intelligence was there. Nothing was done. In this kind of crisis, we can only blame the government." (end)

Police in Sri Lanka say they have arrested 40 suspects since the wave of deadly suicide attacks Sunday killed hundreds and wounded hundreds more.

According to The Associated Press, among the suspects arrested were the driver of a van allegedly used by suicide bombers, and the owner of a house where some of the attackers lived. Most of the people arrested are Sri Lankans, but police are also investigating whether foreigners were involved in the attacks.

Funerals are now under way for those who were killed in Sunday's attacks. The United Nation's children's agency, UNICEF, said Tuesday that at least 45 children were among the dead.