Accessibility links
In Climate Change Fight, New York City Will Push Skyscrapers To Slash Emissions A law — the first in the world — will require retrofits of large buildings, with a price tag in the billions. Buildings are responsible for about 70% of the city's greenhouse gas emissions. 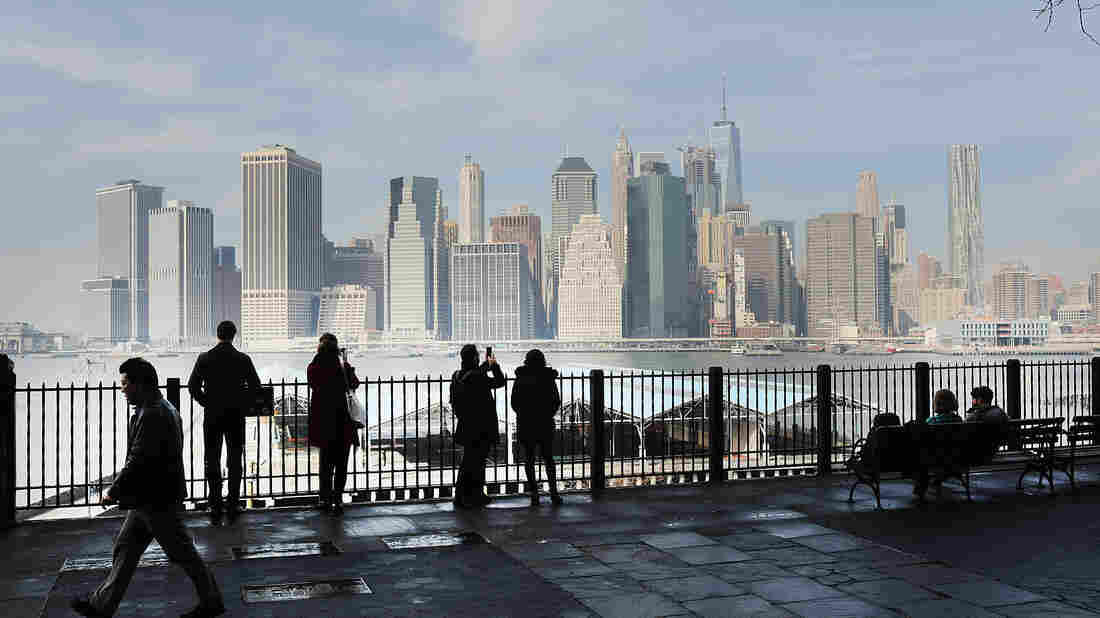 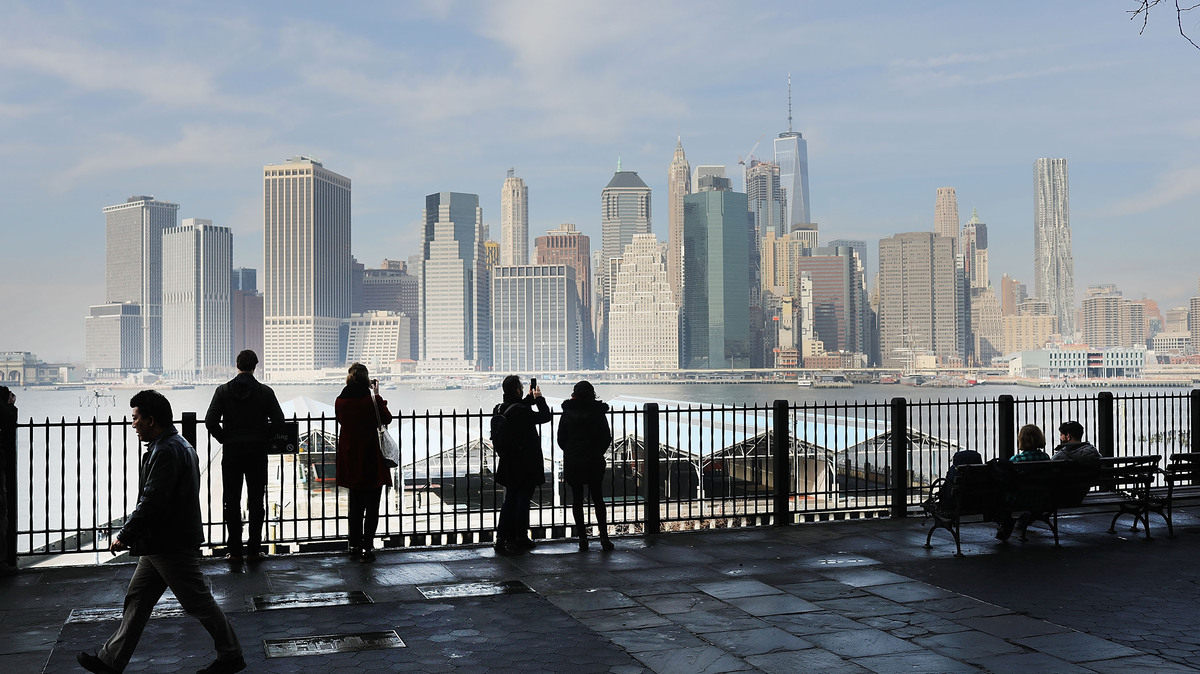 Pedestrians walk in Brooklyn on an unseasonably warm afternoon in February 2017, when temperatures reached near 60 degrees. To take action against climate change, New York City is requiring large buildings to retrofit their structures to improve energy efficiency.

On the steps of New York City's City Hall last week, about 100 people gathered to enthusiastically chant their support for a landmark climate bill.

It didn't target cars or coal, but another major emitter — in fact, the source of nearly 70% of New York City's greenhouse gas emissions. It's a sector that dominates New York's skyline, but has largely managed to dodge the spotlight when it comes to climate change.

"Dirty buildings," they shouted, "have got to go!"

The City Council passed a measure Thursday to require owners of large buildings to invest in retrofitting and improving their structures to slash their contribution to climate change.

Cities around the world have been calling for greater efficiency from new construction, and a number of cities have pledged to make all buildings carbon-neutral by 2050.

But Mayor Bill de Blasio says New York's new measure, which he will sign into law soon, is the first in the world to actually mandate changes from existing buildings.

Under the law, which its supporters hope will serve as a model for other cities around the world, owners will need to improve insulation, lighting, heating and cooling systems, among other changes, to reduce the amount of energy their buildings use.

The goal is ambitious: The city's largest buildings will have to cut their emissions by 40% by 2030, and by 80% by 2050. The cost of the necessary changes is estimated at some $4 billion, although some of those costs will be recouped by building owners through energy savings and the added value of an energy-efficient building.

"These are very intense goals, but reachable goals," de Blasio told NPR in an interview. "These buildings are the single biggest piece of the [climate change] problem that hasn't been addressed, and we had the tools to do it right now."

If building owners do not comply with the measure, they will face substantial fines — $1 million or more per year for the largest buildings. 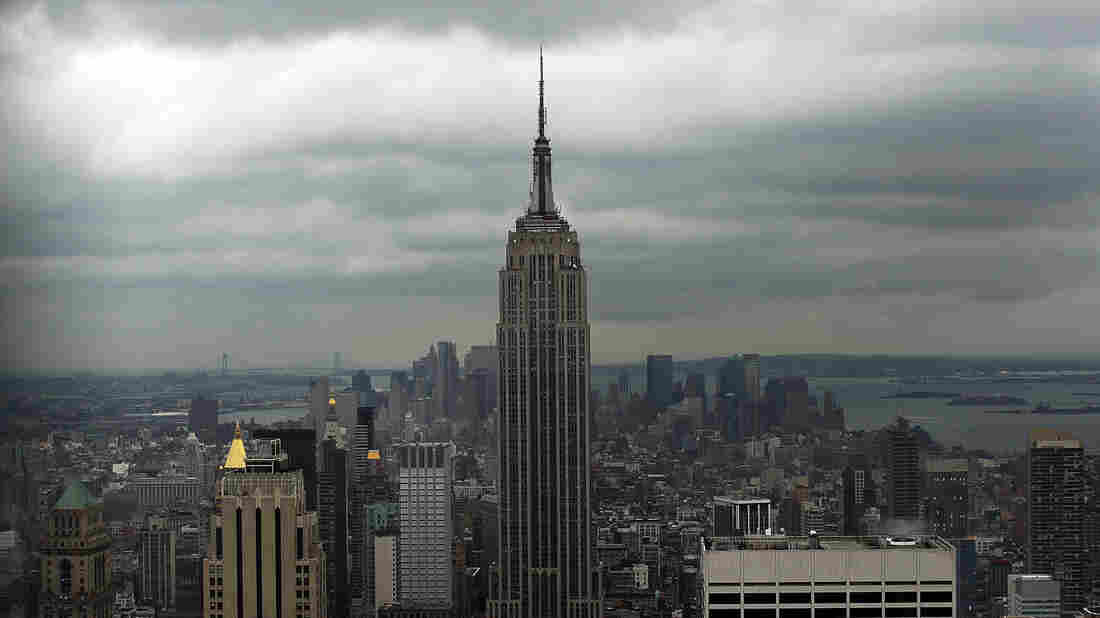 The Empire State Building, shown here in 2010, looks the same as ever. But the landmark is now packed with energy-efficiency retrofits, invisible to tourists and even tenants. Spencer Platt/Getty Images hide caption 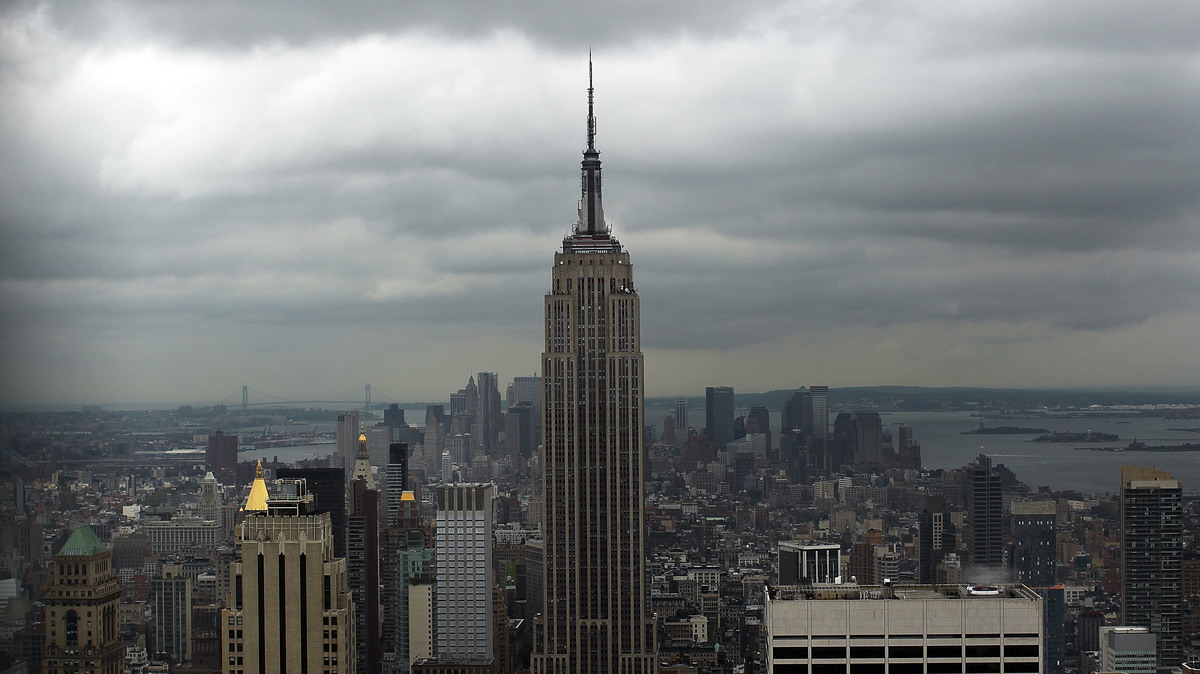 The Empire State Building, shown here in 2010, looks the same as ever. But the landmark is now packed with energy-efficiency retrofits, invisible to tourists and even tenants.

So what does it actually take to make an old skyscraper energy-efficient?

Actually, there's not much glimpsing involved. For the past 10 years the landmark has gone through an ambitious energy-efficiency overhaul, but the vast majority of the changes are invisible.

If you look closely on an elevator ride to the 86th floor observation deck, you might notice a small icon indicating that the elevator recaptures energy during descents, instead of wasting it as heat.

That's just the tip of the iceberg. Retrofits are woven throughout the building. The windows are newly insulated — a window factory was actually built on-site, to upgrade the existing windows in the most efficient way possible. The radiators have reflective barriers installed behind them, to direct as much heat as possible into the building instead of out into the air.

The lights are dimmable. The air-conditioning systems are more efficient and can be controlled more precisely. Tenants in the building have new tools to allow them to monitor and cut their energy consumption. 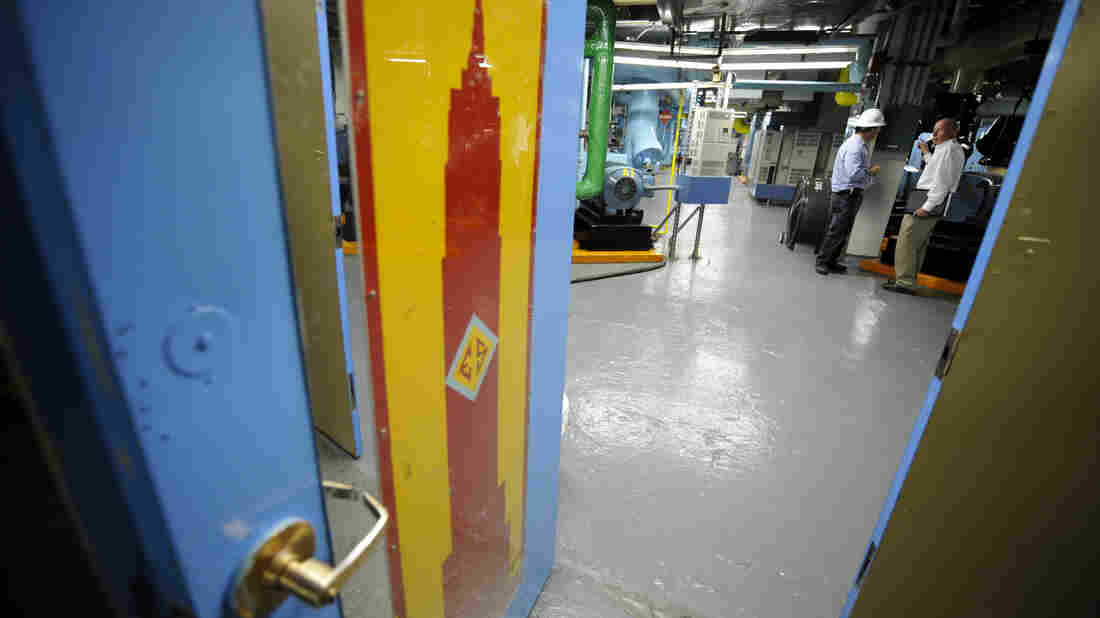 A door opens into the Empire State Building's cooling system machinery room in 2009. Since then, this system and many other parts of the building have been retrofitted for energy efficiency. Emmanuel Dunand/AFP/Getty Images hide caption 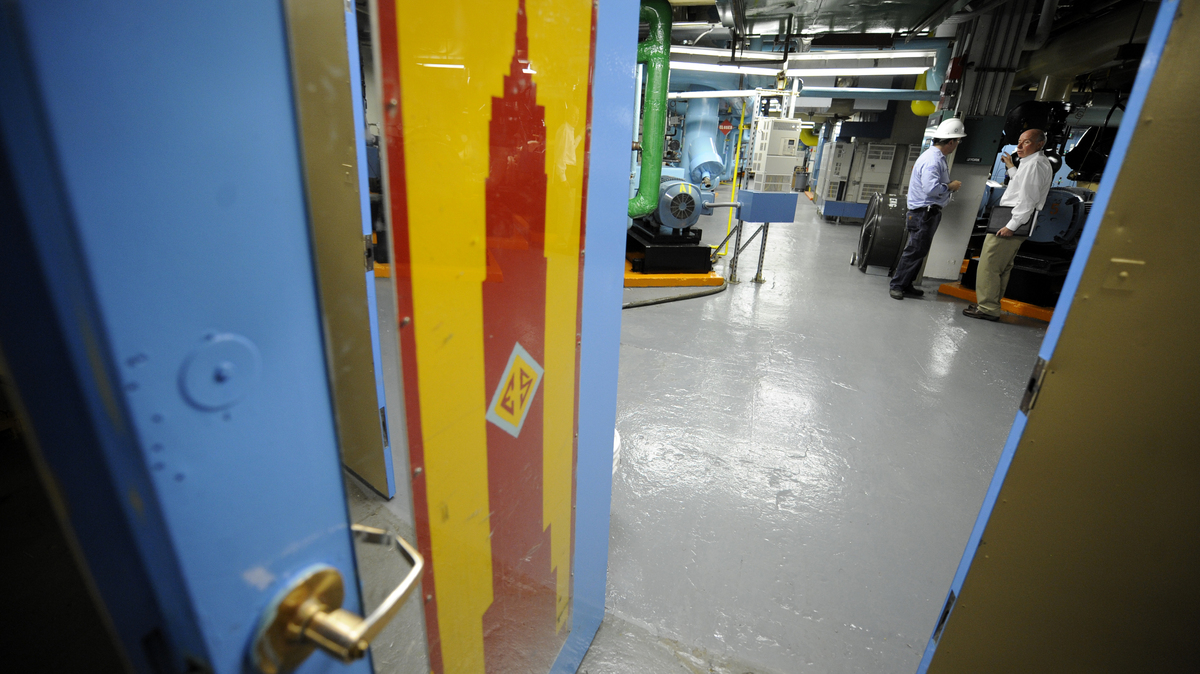 A door opens into the Empire State Building's cooling system machinery room in 2009. Since then, this system and many other parts of the building have been retrofitted for energy efficiency.

Each individual improvement cuts efficiency slightly; combined, they're designed to cut energy use by 38%.

"There is no silver bullet," says Anthony Malkin, the CEO of the Empire State Realty Trust, which owns the building. "These are lots of little pieces. So we call it silver buckshot."

So far the building has been exceeding its energy-efficiency targets. And while the project wasn't designed to cut carbon emissions specifically, that's an obvious outcome: "When you reduce energy consumption, you reduce carbon output," Malkin says. "It's very simple."

The realty trust's energy-efficiency programs were performed voluntarily, and they were good for the company's bottom line — after spending millions of dollars in the retrofits, the trust has already seen a return on its investment, and so have its tenants.

But the new law requires even more.

The U.K. Economy Is Growing — But Its Energy Use Is Shrinking

"This is absolutely a step that goes beyond anything that we've even accomplished in our buildings," Malkin says.

He also emphasizes that while the new law focuses mostly on owners, commercial landlords can only cut emissions so far before tenants, too, have to be held responsible for cutting the energy use that they can control.

The new requirements apply only to large buildings, with more than 25,000 square feet. There are about 50,000 of those in New York City.

There are also a number of exemptions, including hospitals, public housing and rent-controlled residential buildings. Supporters of the bill say the carve-outs secured the support of affordable-housing advocates who helped get the mandates passed — previous attempts to require building retrofits have floundered, while a broad coalition of groups rallied behind the City Council's latest effort.

But the Real Estate Board of New York, the powerful body representing the city's real estate industry, has objected to the fact that the bill sets requirements for large commercial buildings while excluding other landlords.

"The approach taken today will have a negative impact on our ability to attract and retain a broad range of industries," board President John Banks said in a statement.

New York City is already an extremely expensive place, for businesses as well as for residents. While building owners can expect to recoup at least some of their costs — many retrofits, as the Empire State Building demonstrated, are cost-effective — that won't always be true.

"They are the kinds of mandates that some building owners will find to be stretch goals and will find to be difficult. But that's the point," de Blasio says. That is, the law is designed to push owners to make changes they wouldn't otherwise.

"It's not supposed to be too easy," de Blasio says. "We have to set the bar high."

Supporters of the bill, including the council members who passed it, have responded to concerns over cost by pointing out that climate change poses an existential threat to this coastal metropolis. On Thursday, many of the bill's supporters recalled the devastating effects of Superstorm Sandy in 2012.

"You can't put a price tag on life on Earth," City Council Speaker Corey Johnson said before the council's vote.

Or, as Eddie Bautista of the NYC Environmental Justice Alliance told crowds outside, "If your house is on fire, you don't ask how much the windows cost when they kick it in."

Maritza Silva-Farrell is the executive director of Align, a nonprofit that pushed for the bill's passage. "The lives of our kids and our grandkids are at stake and we really need to take bold actions," she says.

"The question I constantly ask," she says, "is for folks to actually do a cost analysis" — and account for those human lives.