Accessibility links
Sissi Could Remain President Until 2030 After Egypt Vote The amendments, which were approved by nearly 90% of voters, further entrench the power of the military and extend the power of Egyptian President Abdel-Fattah el-Sissi. 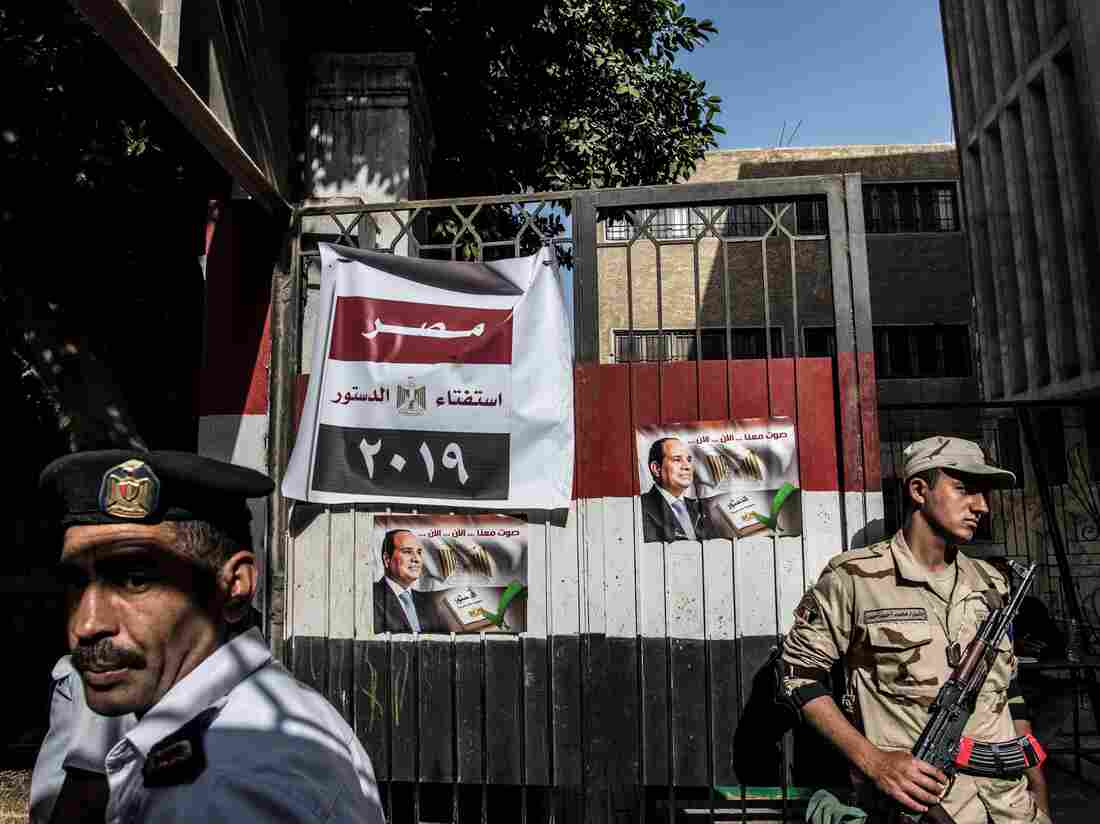 An Egyptian soldier and a policeman stand guard at a Cairo polling station on Monday, the third day of a referendum on constitutional amendments. Khaled Desouki /AFP/Getty Images hide caption

Egyptian voters have approved sweeping constitutional amendments that allow President Abdel-Fattah el-Sissi to remain in office until 2030 and further entrench the power of the military.

Voters approved the amendments by 88.83%, according to the National Election Authority, which said that 44.33% of eligible voters took part in the poll.

Sissi came to power after deposing Mohammed Morsi, who came from the Muslim Brotherhood, in a 2013 coup. Morsi, a polarizing, democratically elected president, saw mass street protests against his rule. Since his ouster, Sissi has launched a massive and wide-ranging crackdown on dissent.

This is a predictable yet decisive blow for aspirations of a robust democracy in Egypt that were at their peak in the aftermath of the country's mass uprising in 2011.

Human rights groups have spoken out against the changes and the political climate surrounding the vote.

"Given the ongoing repression, and that political opposition in Egypt has dwindled to a nominal presence, a free and fair vote will be impossible," Human Rights Watch said in a recent statement.

"These amendments aim to smother Egyptians' aspirations to live in dignity and under the rule of law," the group's deputy Middle East and North Africa director, Michael Page, added.

"Since 2013, the country has experienced the biggest authoritarian crackdown in its modern history, aimed at members of the peaceful opposition, both Islamist and secular. More than 60,000 people have been jailed for political reasons, and hundreds have died in prison," Bahey eldin Hassan, the director of the Cairo Institute for Human Rights Studies, said in a recent opinion piece in The Washington Post.

Last week, Egypt's Parliament approved the amendments, and Egyptians voted in a referendum on Saturday through Monday.

In a statement after the vote was announced, Sissi called the result a "wonderful scene" that will be "written with pride into our historical record."

The changes extend Sissi's current term from four to six years and allow him to run for another term — which means he could remain in power until 2030. A previous draft of the amendments would have allowed him to potentially stay in office until 2034. His current term would have been his last, according to Egypt's Constitution passed in 2014.

The amendments also chip away at the independence of the court system. Supporters of the changes have said they are important for Egypt's stability.

"Pro-government media, businesspeople and lawmakers had pushed for a 'yes' vote and a high turnout, with many offering free rides and food handouts to voters, while authorities threatened to fine anyone boycotting the three-day referendum," the Associated Press reported.

Some websites that were encouraging people to vote "no" appeared to be blocked in Egypt, according to Human Rights Watch and the independent Egyptian news site Mada Masr.