Accessibility links
A Love Story That Began With A Matchmaker And A First Date On NPR In 2017, NPR documented the first date of a couple paired by a professional matchmaker, for a story about modern dating. A year after their first date, the couple got engaged, and they recently wed. 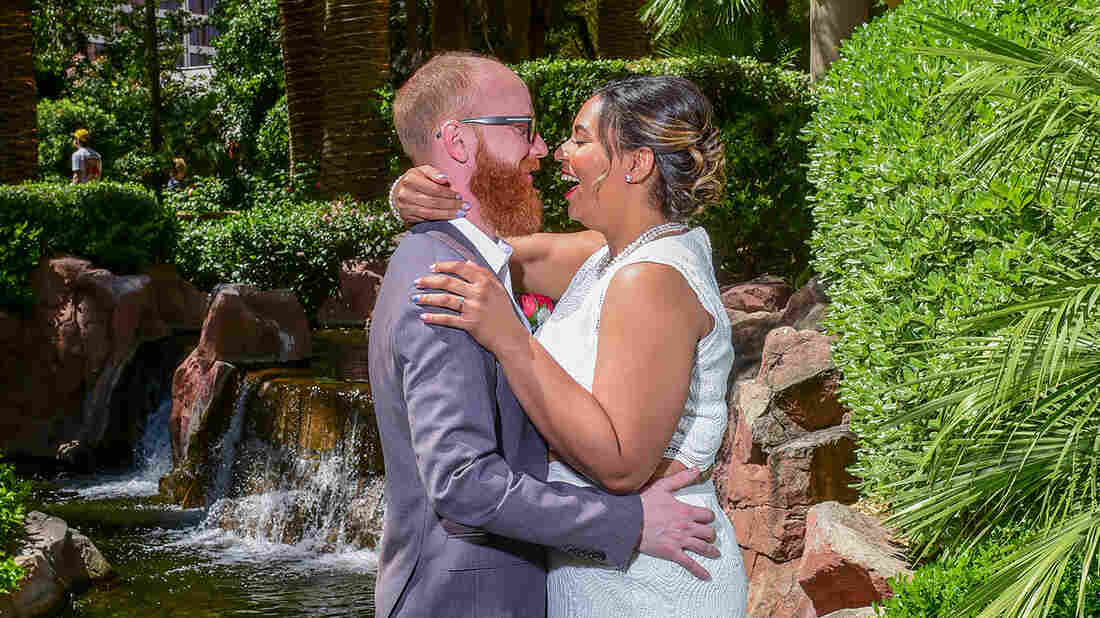 Kevin Biely, 37 and Kat McClain, 28, on their wedding day in Las Vegas. In 2017, NPR documented their first date, which was set up by a matchmaker. Courtesy of Cahsman Photo hide caption 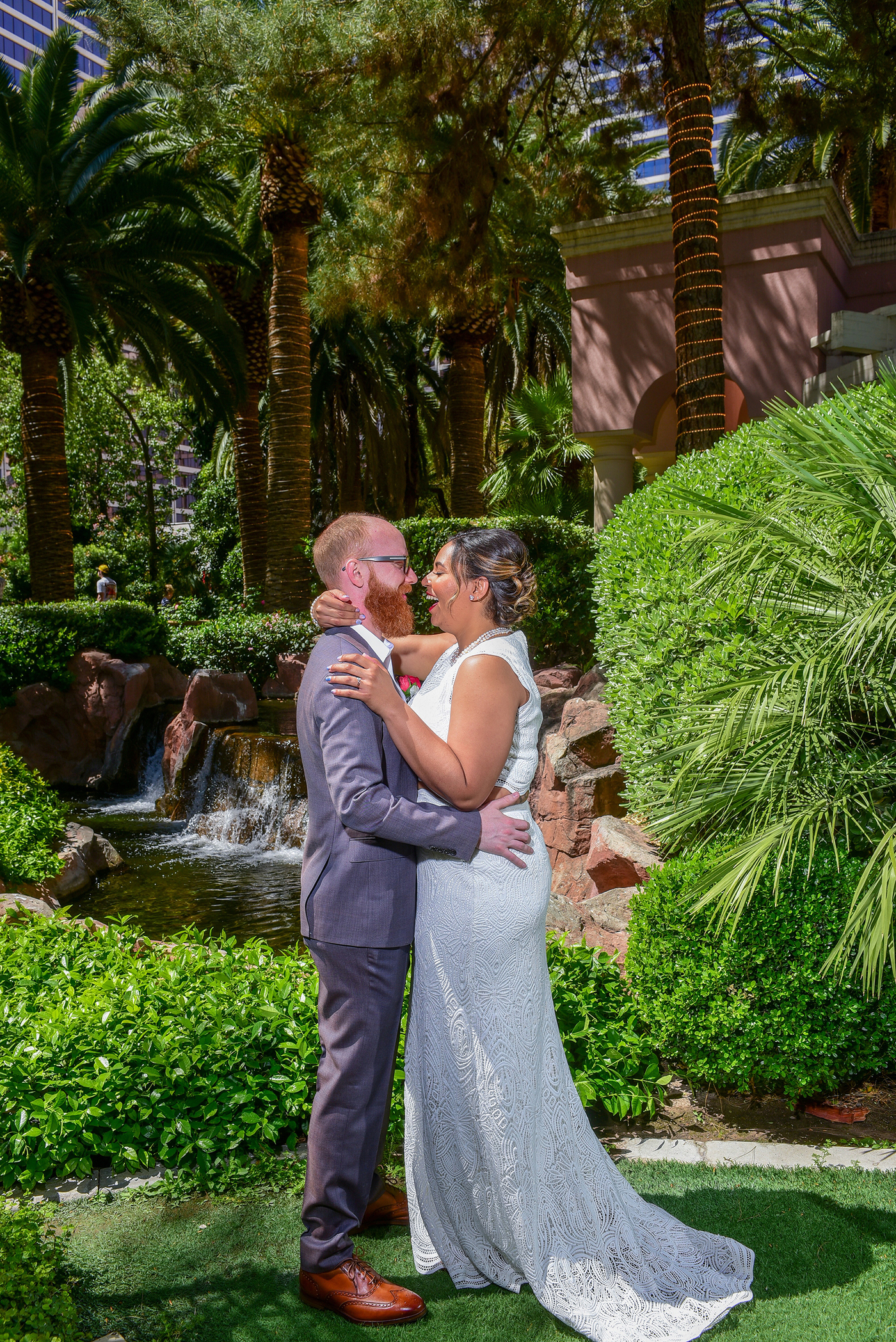 Kevin Biely, 37 and Kat McClain, 28, on their wedding day in Las Vegas. In 2017, NPR documented their first date, which was set up by a matchmaker.

For Kevin Biely, 37 and Kat McClain, 28, that's how their love story began.

In December 2017, Morning Edition profiled McClain, an attorney in Los Angeles, as part of a series of stories about modern dating. The series, What Makes Us Click, explored how dating has evolved as apps and websites have grown more popular.

At the time, McClain was frustrated with online dating, so she turned to a modern matchmaker. "I had a really scattershot approach to who I was going out with," she told us. "I was getting burnt out." Through matchmaking service Three Day Rule, McClain purchased a package — totaling around $6,000 — for, among other things, six first dates, postdate advice and help optimizing her online dating profile.

Listen: Kat McClain and Kevin Biely on their first date

McClain's date with Biely, director of e-commerce at Goodwill Southern California, was her first (and only!) arranged by the matchmaker. The couple went on a dinner date in LA, and producers from Morning Edition and a photographer tagged along.

The couple were nervous as the date started, though they eventually relaxed, talking so long that they closed down the restaurant — but not before splitting an ice cream sundae. A few months ago, on their first-date anniversary, the pair celebrated by going to that same restaurant. This time when they ordered dessert, Biely proposed. They wed in Las Vegas in early April.

When McClain emailed Morning Edition in January to share the news of their engagement, we wanted to know more about how they had gone from strangers to serious under what hardly screamed auspicious circumstances — a blind date that was recorded and photographed and later shared with millions of people. 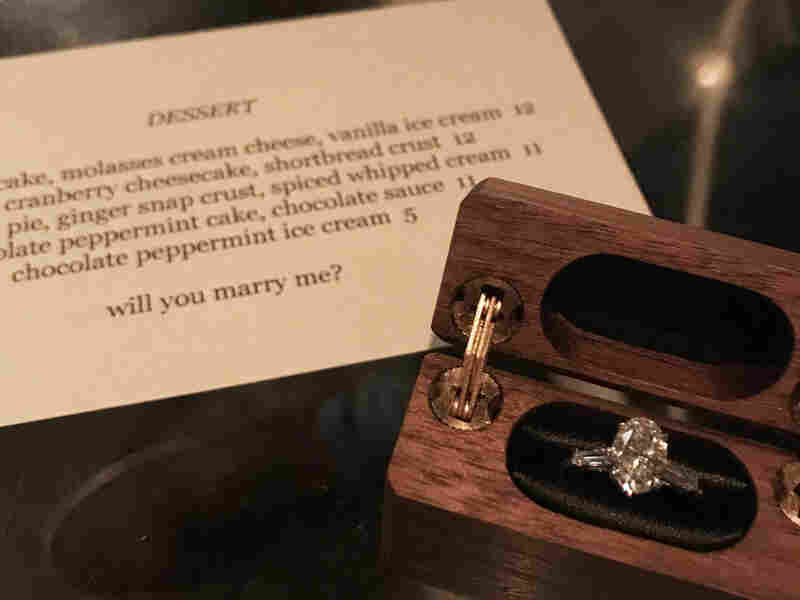 Kevin Biely proposed to Kat McClain over dessert a year to the day of their first date. Courtesy of Kat McClain hide caption 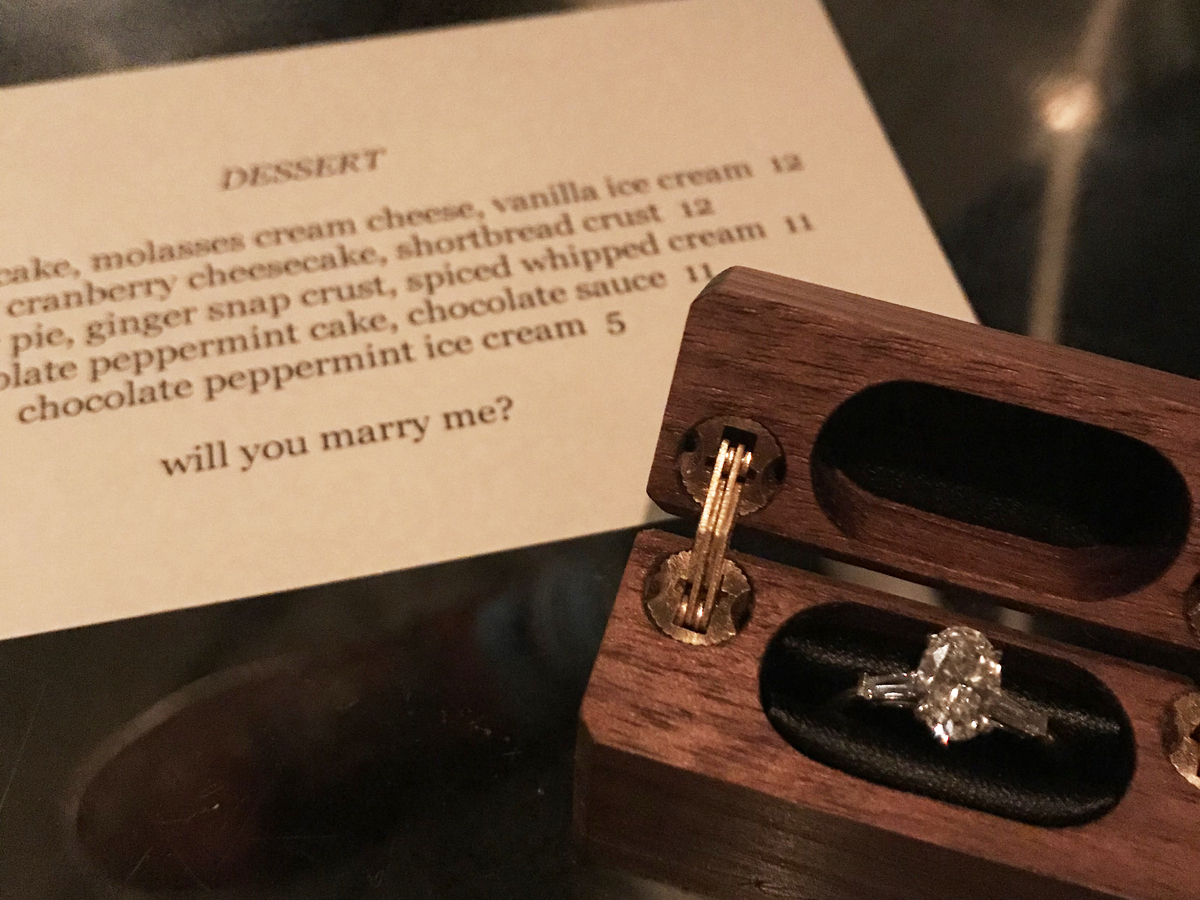 Kevin Biely proposed to Kat McClain over dessert a year to the day of their first date.

So we emailed McClain and Biely some questions about their love story. Their instructions were simple: Answer them honestly and separately from each other — no peeking!

Here's what they had to say. Their answers have been lightly edited. (You can listen to the couple's separate interview with Morning Edition host David Greene by clicking the audio button at the top of this story.)

When did you know that you wanted to marry your partner?

McClain: I knew I wanted to marry Kevin on Valentine's Day last year (yes, two months and one day after our first date). We had decided to skip gifts and the whole crazy going-out scene for the night. The plan was for him to cook a low-key dinner and keep it laid back. I was pretty clear that Valentine's Day wasn't a big deal to me, and assured him that no, it wasn't a trap where I expected some huge to-do after saying that. When I arrived at his place for dinner, he had this ridiculous, huge grin on his face (completely adorable, if a touch smug, in my opinion), and I was immediately suspicious that he had ignored me and bought presents and gone all out and let me turn up empty-handed. I was fully ready to be annoyed with him for being just another guy who can't listen to the words I say and has to parse them for secret "girl" messages. But Kevin surprised me. He was cooking Khao soi, my favorite food — which I had made a single throwaway comment about struggling to find about a month before that day.

PodProsal: A Marriage Made in Podcast Heaven

He had been traversing Southern California hunting down the ingredients to make it for me. I think I might have actually cried a little when I realized what was going on.

To me, this anecdote is a perfect microcosm of who Kevin is as a partner. I knew then I wanted to spend the rest of my life with him, because I felt taken care of, loved and truly heard in a way I only felt with my closest friends. 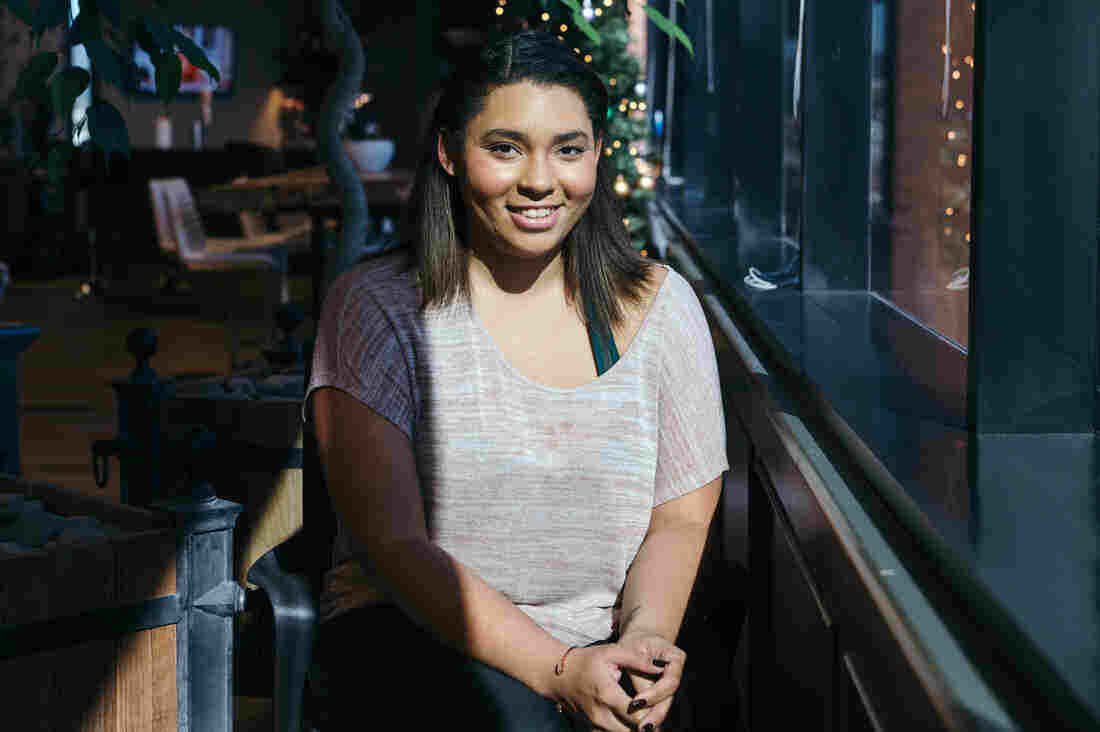 In December 2017, Kat McClain felt burned out by the dating scene, so she decided to enlist the help of Three Day Rule, a modern matchmaker. Jessica Pons for NPR hide caption 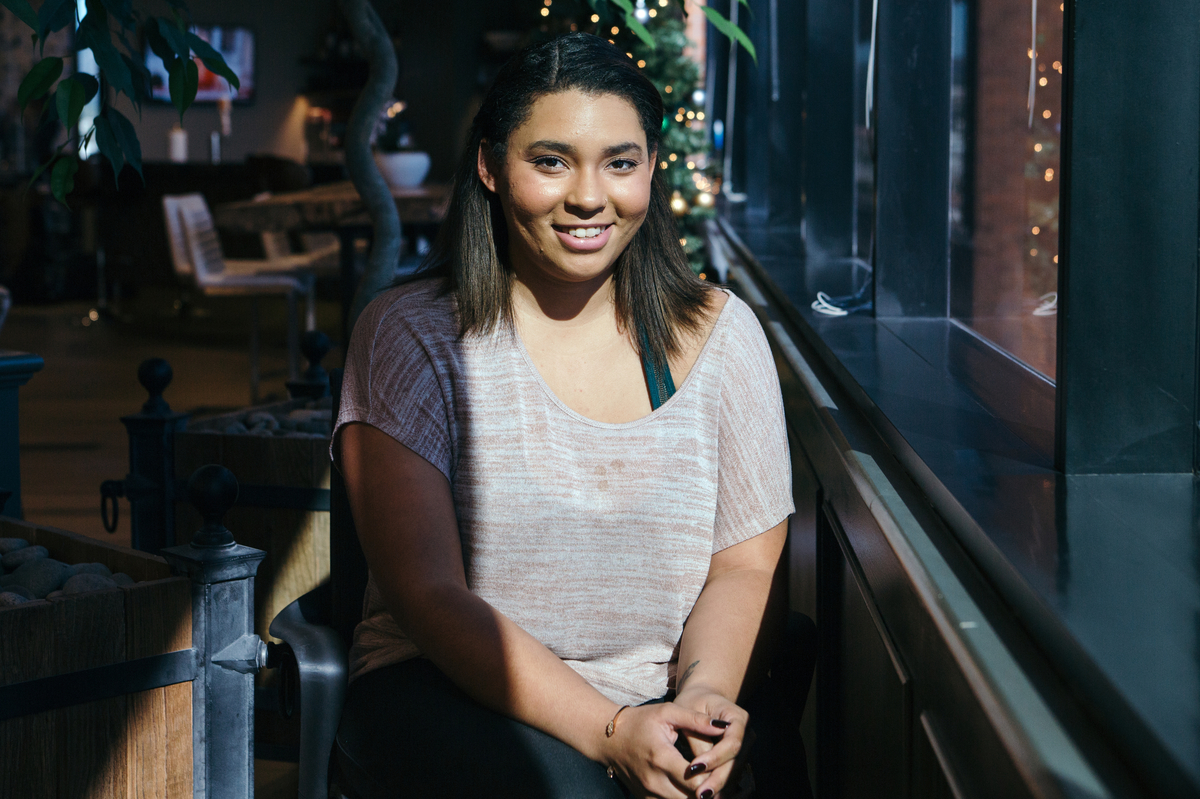 In December 2017, Kat McClain felt burned out by the dating scene, so she decided to enlist the help of Three Day Rule, a modern matchmaker.

Biely: For me it was earlier than I'd usually admit: I think as soon as the fourth date that this was going to be different than every other woman I'd been seeing for the last few years. We went hiking through the Palisades one weekend morning, taking a good few hours to make it up to the ridge line and see the ocean. And while we had spent a sum total of maybe 24 hours together prior to that, it felt like we had known each other forever.

We asked follow-up questions on family and friends, laughed at in-jokes that we had just made, and created new stories to tell each other. I went home from that date struck by how timeless being with her was; every moment was engaging and meaningful, and yet I couldn't tell you how long any time together might have lasted. Every word, every gesture, and every feeling felt exactly as it should be, and without effort. And it's not hard to get from thinking how easy this is to how is easy it would be to keep going, and how far. I think the first time I entertained the idea was [during the] drive home afterwards. Here it is more than a year later and I'd tell you every single moment is still meaningful and engaging, and I couldn't imagine it being anything other than just so.

Do you think you would have met without Three Day Rule? How much do you attribute your relationship to the matchmaking service?

McClain: No, I don't think so. We used to go to the same bar occasionally, but I never noticed him there and as far as I know he never noticed me there either.

I think I attribute our relationship to Three Day Rule pretty heavily, because not only do I think we would not have met but for TDR but I also think that we would have connected differently if we had met without the background knowledge about each other and about what we both expected and wanted from the relationship. We certainly would have moved slower if we'd met some other way and I think some of the magic of "us" is in how easily it all fit together and how instant our connection felt.

Biely: I suppose it's not impossible. We actually used to frequent the same bar and we were on the same apps, but that's such a wide net it's not very likely we'd have crossed paths, I believe. And besides, even if we had, our relationship and history would be different I think. Part of what made it such a great experience was knowing that we wanted the same things, and weren't afraid to ask for them. The typical pas de deux would have you holding back on what you want, or what you think, or waiting till the right time to bring up when we should move forward with this or that, and none of that was necessary for us. It wasn't really necessary since we had that understanding upfront. I do think we're fundamentally very compatible (obviously, LOL) and had we met any other way would we be happy and together? Not a doubt. Would we have moved as quickly as we did in our relationship? Probably not, and that's fine. Those habits are in place because absent all the information that your partner has, they make sense in and of themselves. We just would have taken the slow lane. 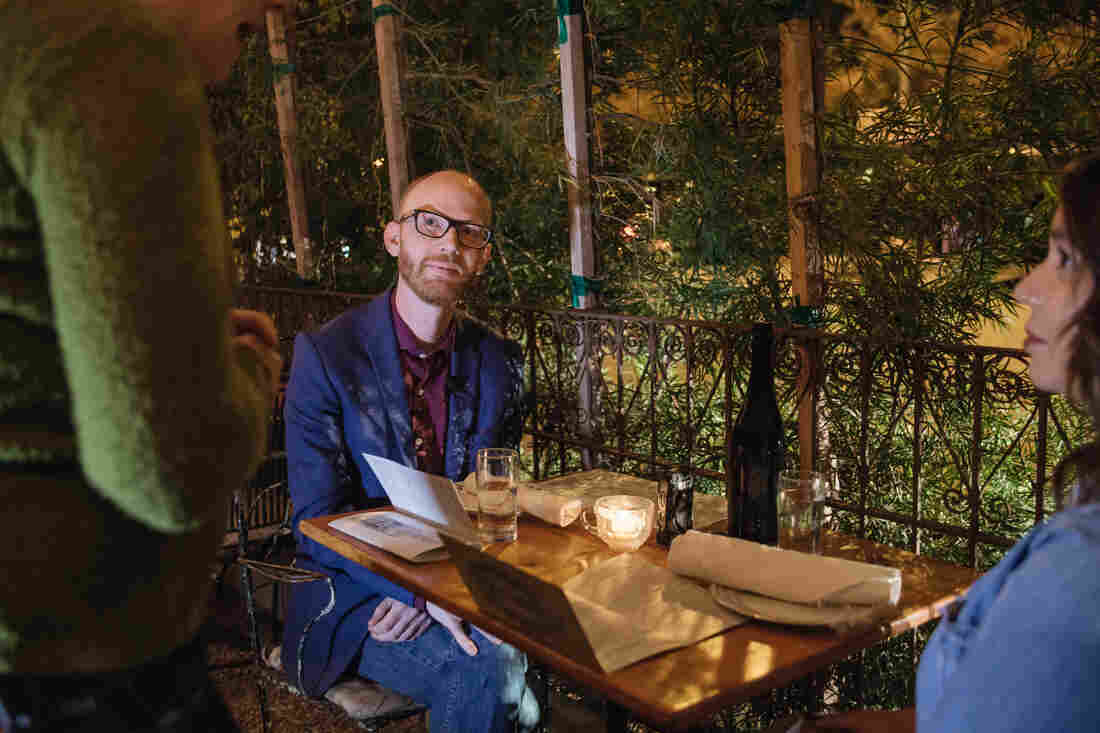 Biely and McClain on their first date. Jessica Pons for NPR hide caption 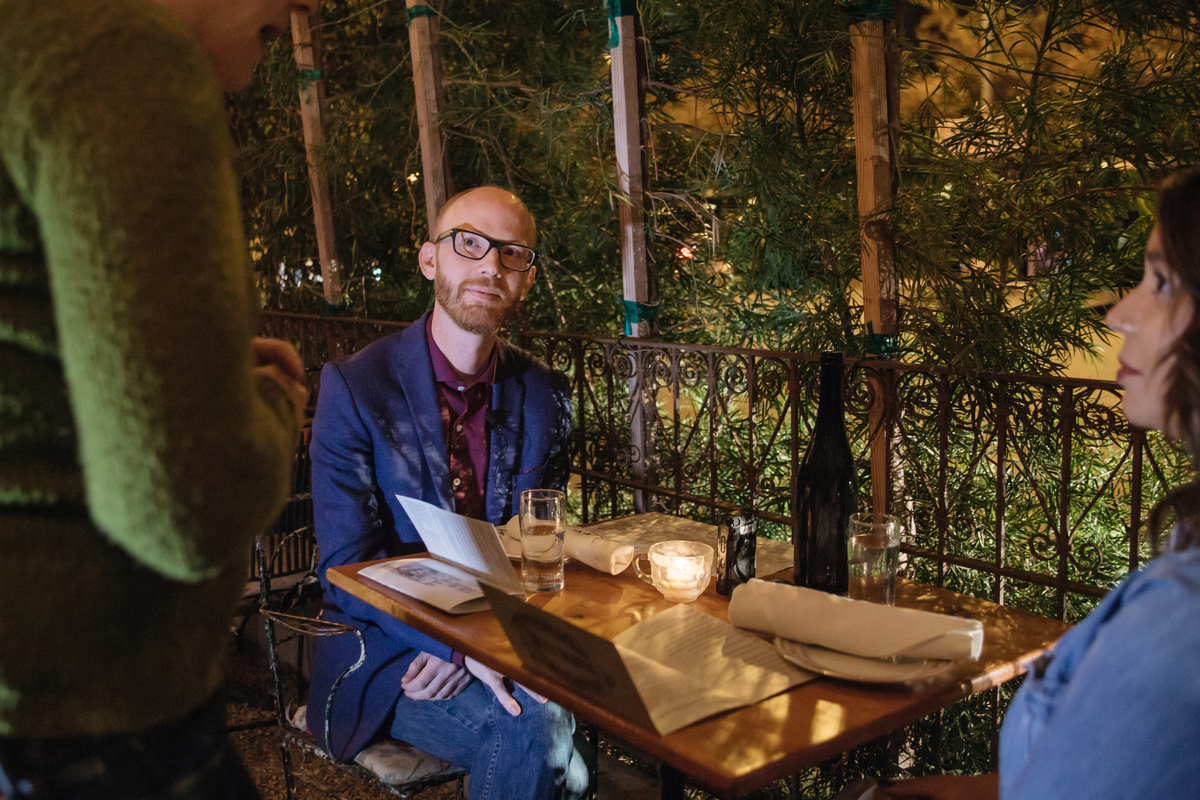 Biely and McClain on their first date.

Before the two of you met, Alexa Geistman, McClain's matchmaker, suggested Kat should be with someone with "quiet confidence who shares the same values as her." How do you relate to this now?

McClain: You know, to be completely honest with you, I had no clue what that really meant when Alexa said it originally. Now that I know Kevin, it makes perfect sense.

I am loquacious and rather intense — definitely a lot to handle on a daily basis. One of the reasons Kevin and I work so well together is that he is so sure of himself, of his feelings for me, and of our relationship, so he balances out my tendency to overthink things and freak out and question myself. One of the other reasons is that we have pretty different interests and spent our free time very differently before we got together, but we want the same things out of life and think that the same things are important.

Some really key things for the functioning of any good long-term relationship, like chemistry, compatible senses of humor and being good roommates, we just lucked into, but shared values and quiet confidence are traits that could be specifically selected for in a partner for me that I would not have screened for myself. And that's exactly what TDR did for me.

Biely: For my part, I still think it holds. Katherine's a headstrong woman, and I like that about her. I think she needs someone who CAN DIAL IT TO 11 when necessary, but then not, when it isn't. And for a relationship with her to be successful she'd need to respect and trust him enough to know when the right timing is for each. It's always in the timing.

So kind of like a David Ives play, we've just done the same thing over and over again to [great comedic effect] until we each found a person that had the right answers for us. Luckily there was someone out there who could take the honest measure of us, and help us find something to match. 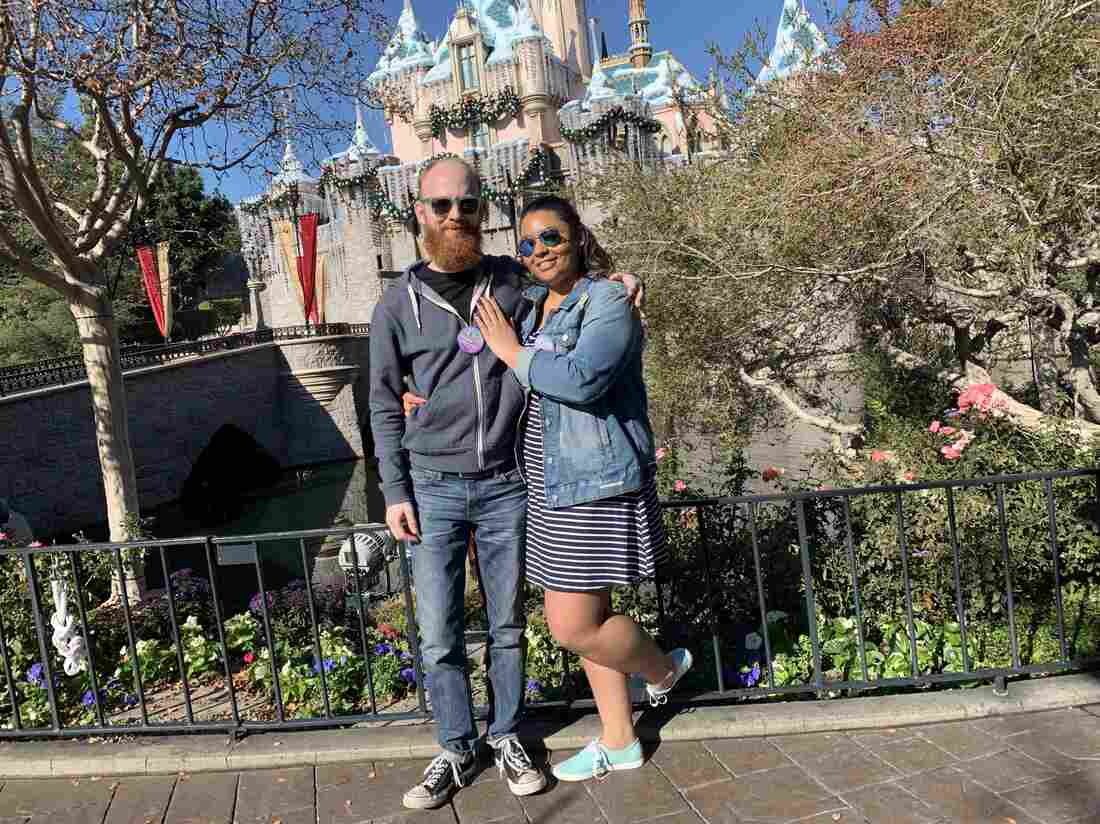 The couple visited Disneyland in December 2018 to celebrate their engagement. Courtesy of Kat McClain hide caption 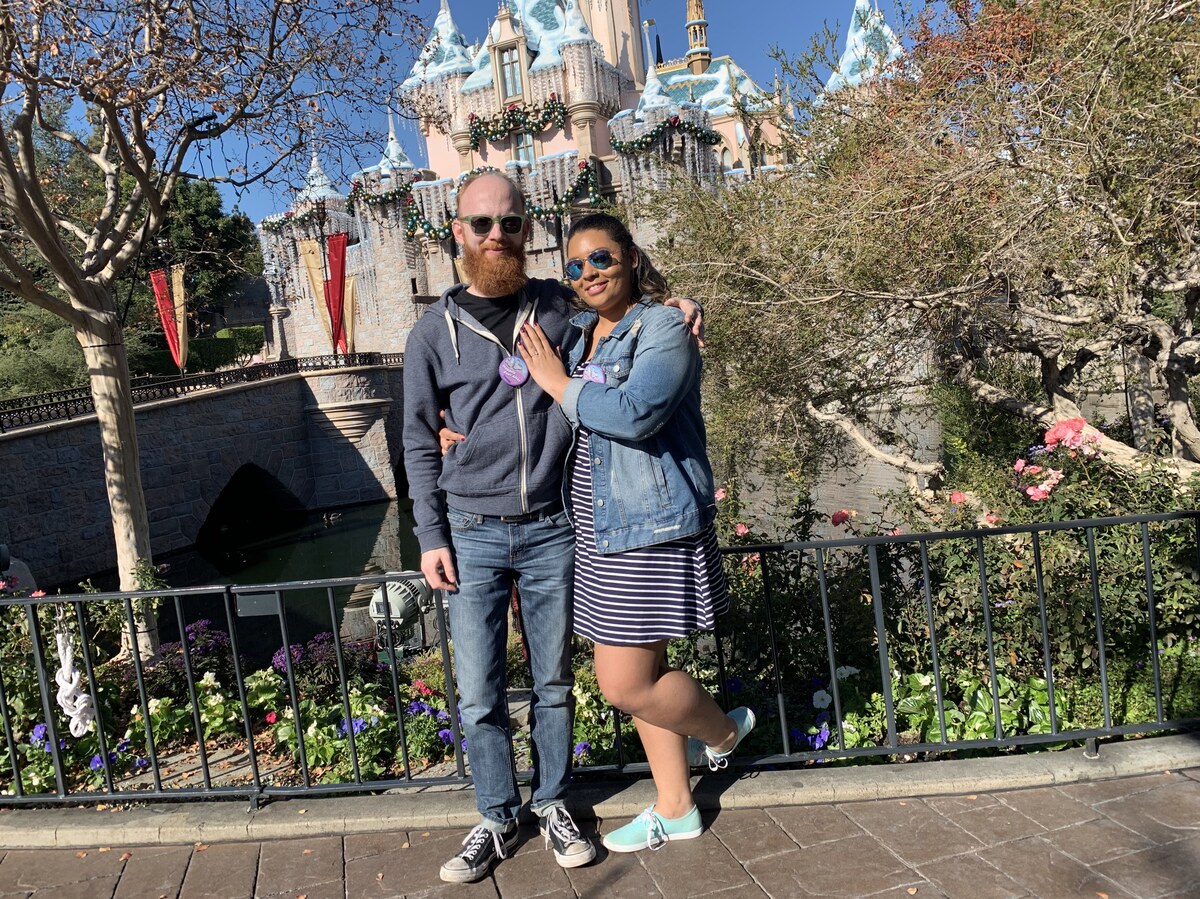 The couple visited Disneyland in December 2018 to celebrate their engagement.