Accessibility links
After Felony Conviction, Iraq War Veteran Faces Deportation To Mexico Edgar Baltazar Garcia got into some serious trouble after he came home from war. Now, he faces deportation over a felony conviction unless an immigration judge decides to let him stay in the U.S. 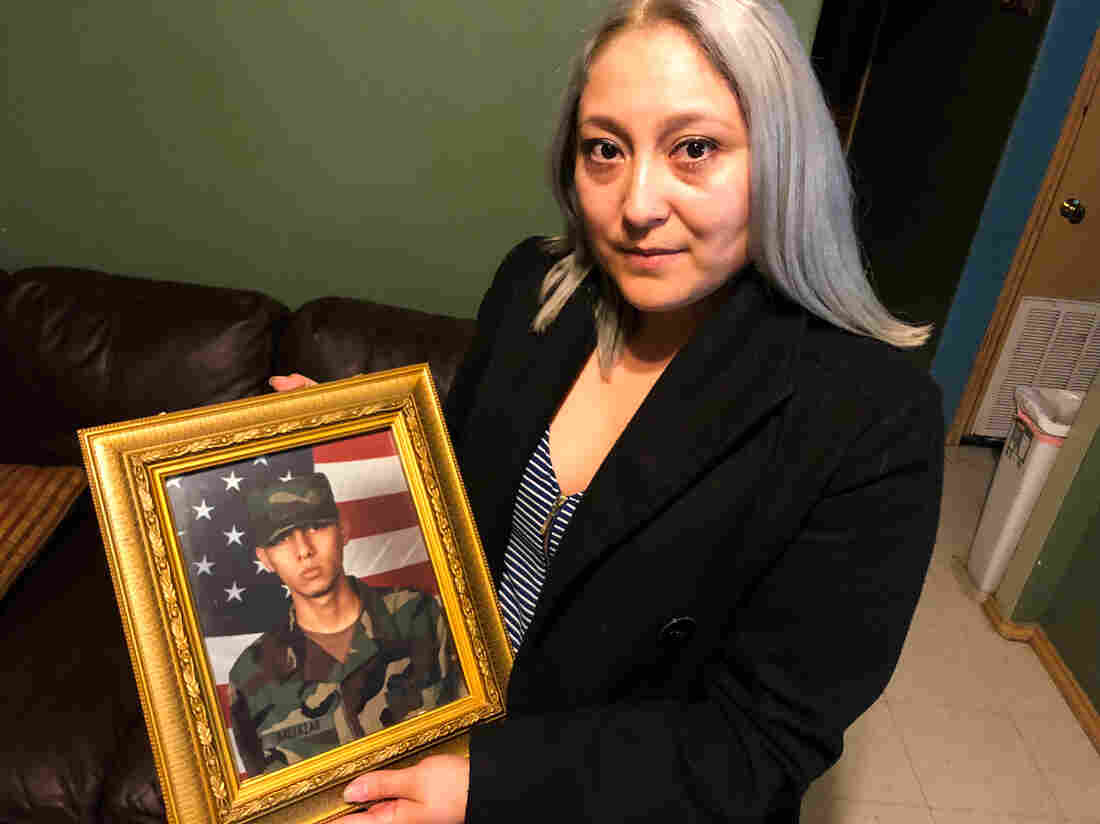 Edgar Baltazar Garcia's wife, Jennifer Garcia, holds a photo of her husband from when he was deployed at Balad Air Base in Iraq as a turret gunner in a Humvee. He now faces deportation to Mexico over a felony conviction. John Burnett/NPR hide caption 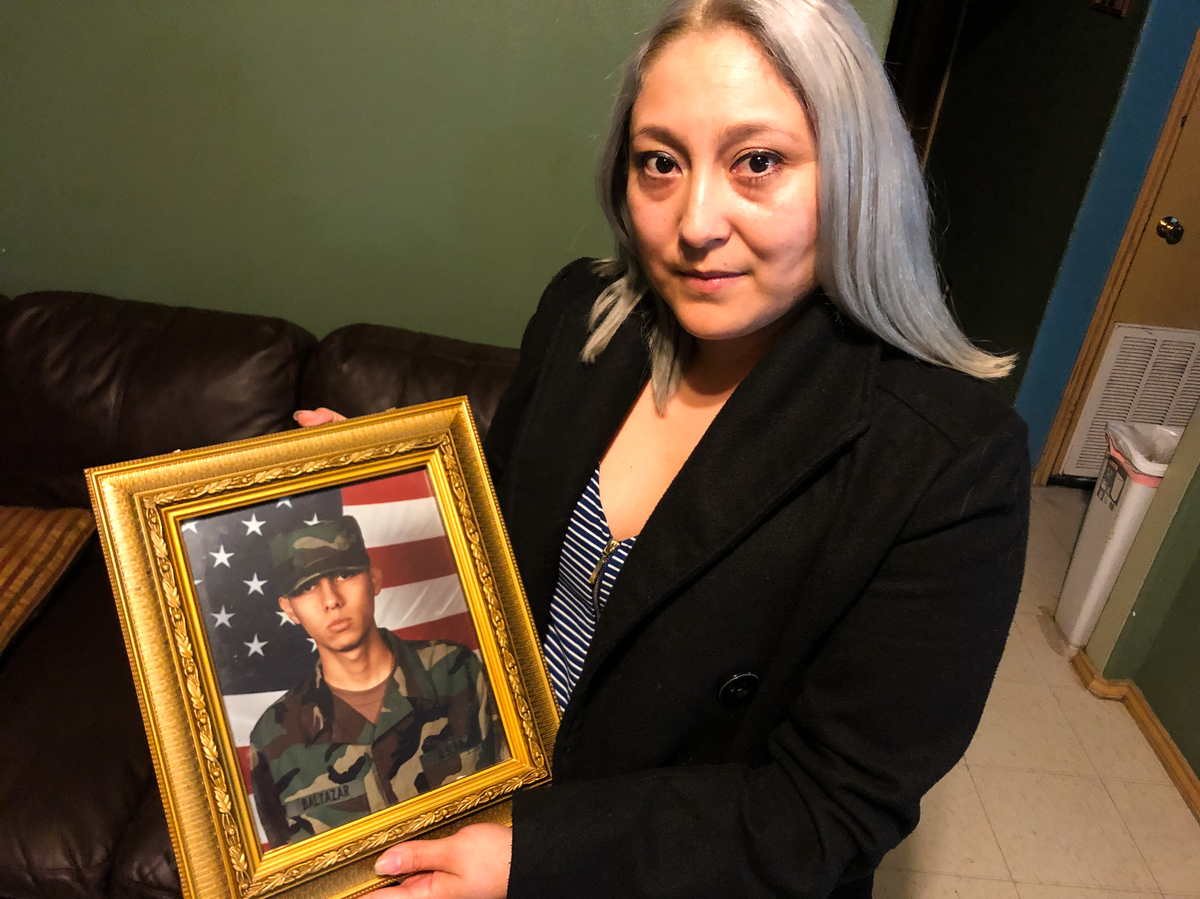 Edgar Baltazar Garcia's wife, Jennifer Garcia, holds a photo of her husband from when he was deployed at Balad Air Base in Iraq as a turret gunner in a Humvee. He now faces deportation to Mexico over a felony conviction.

An Iraq War veteran who is not a U.S. citizen is facing deportation to Mexico over a felony conviction unless an immigration judge decides to let him stay in the United States.

Edgar Baltazar Garcia, 38, is husky and bearded, and he's physically larger than the Central American men who sit glumly beside him on a bench in immigration court in South Texas. The infantryman wore combat fatigues when he manned a .50-caliber machine gun — nicknamed Lucifer — in the turret of a Humvee when he served in Iraq 15 years ago. Today, his uniform is a red jail jumpsuit with the letters "PIDC" on the back — Port Isabel Detention Center.

At Baltazar's initial hearing, his attorney, Carlos Garcia, asks the judge to throw out the case. "He's an Iraqi War veteran who suffers from PTSD and is currently detained," Garcia tells the court. At the end of the hearing, the judge denies the motion, and Baltazar is led with the other detainees back to their cells.

The soldier, despite his service medals, got into some serious trouble after he came home from war.

In one incident last year, he pointed a handgun at his domestic partner; in a second incident, he punched her. She pressed charges. Baltazar was found guilty of "aggravated assault on a family member with a deadly weapon."

Because he served in Iraq, his case was moved to a special county court for veterans. There, he received a deferred sentence.

Things were going well. Baltazar was attending counseling sessions and passing drug and alcohol tests. In February, he drove across the border to Reynosa, Mexico, to see a nephew fight in a boxing match. The veterans court had approved the trip. But when he tried to return to Hidalgo, Texas, federal agents on the international bridge checked his record, spotted the felony and took him into custody.

The way immigration law works, his attorney explains, Baltazar could not be deported for his crime as long as he stayed in the United States. "But once you leave and you come back, it's a completely different ballgame," Garcia says, "because the rules at the port of entry are completely different for people who are entering the country and considered what they call 'arriving aliens.' "

Asked to comment on the case, a spokesperson for Immigration and Customs Enforcement said the agency is required to "detain and process for removal individuals who have been convicted of aggravated felonies as defined under the Immigration and Nationality Act."

Baltazar says on the phone from inside the razor-wire detention center, "U.S. citizens can go out and commit a crime — they never fought for their country —and they're not deported. I make one mistake, and I have to pay the price by leaving the country."

I make one mistake, and I have to pay the price by leaving the country.

Baltazar was born in Mexico. His parents brought him to the U.S. when he was 14. He was a lawful permanent resident of the U.S. when he joined the Army, but he never got around to getting naturalized. According to the Migration Policy Institute, 91,000 U.S. veterans are lawful residents who don't have their citizenship.

"I've got veterans right now who've been out of the military 30 years, and they're still not legal citizens. They need to do their paperwork," says Ricardo Peña, a veterans advocate in the Rio Grande Valley. "We call it in Spanish la desidia, meaning they don't do it because they're lazy, they forget about it."

Baltazar's woes are not a product of President Trump's crackdown on immigrants. The United States has been deporting convicted immigrant veterans since the Vietnam War, and for decades it has been sparking outrage.

Rep. Vicente Gonzalez, in whose South Texas district Baltazar lives, has introduced a bill called the Repatriate Our Patriots Act. It would prohibit the deportation of any honorably discharged veteran unless the veteran is convicted of homicide, rape, terrorism or child sex crimes.

Gonzalez cited the case of Carlos Jaime Torres, a Vietnam War veteran in Texas who was convicted of marijuana dealing and deported in 2010. In December, he died in Reynosa, Mexico — where he'd been living in a cheap apartment.

"He passed away and came back in a casket and had a full military service burial. And I just find that very hypocritical of our government," says Gonzalez.

The extensive veterans' community in the Rio Grande Valley stands behind Baltazar.

"He should be tried and adjudicated by the criminal justice system he fought to maintain and not be deported," says Felix Rodriguez, who was an Army intelligence specialist in Vietnam. He attended Baltazar's hearing in immigration court, he says, in solidarity with a brother in arms.

A Veterans Affairs clinic diagnosed Baltazar with post-traumatic stress disorder and traumatic brain injury as a result of his combat duty. Studies indicate that service members and veterans who show PTSD symptoms are at a greater risk of intimate partner violence.

Rodriguez says he sees it every week as an officer with the veterans court that was overseeing Baltazar's case. "Definitely, there's a correlation, a relationship, between PTSD and risky behavior that lands them in our veterans treatment court," he says.

As for the bill in Congress to stop deportations of veterans, its passage is a long shot. "I think the anti-immigrant climate affects my bill," says Gonzalez. "They see it as an immigration bill, which it's not. It's a veterans' rights bill."

Baltazar's final hearing is scheduled for the end of this month. The judge will decide either to deport him or to let him remain in the U.S. Says the vet, "I hope they take into consideration what I did for my country."