Accessibility links
Review: In 'Avengers: Endgame,' Somber Reflection Yields Serious Thrills The culmination of the Avengers franchise proves a remarkably intimate and somber affair until it concludes with a climactic battle more thrilling than anything superhero cinema has delivered to date. 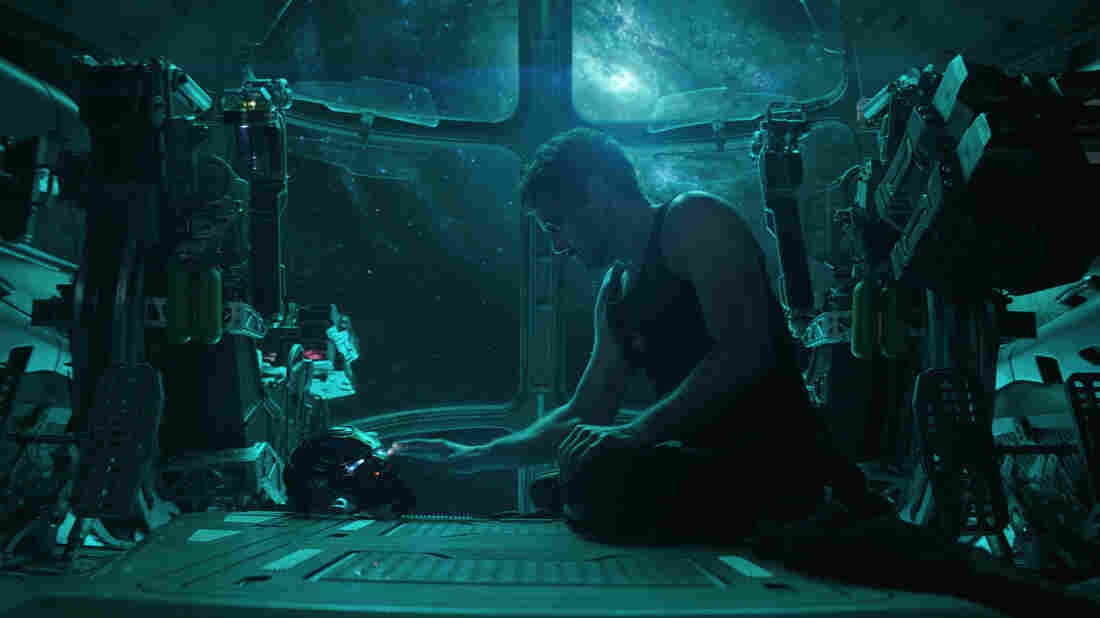 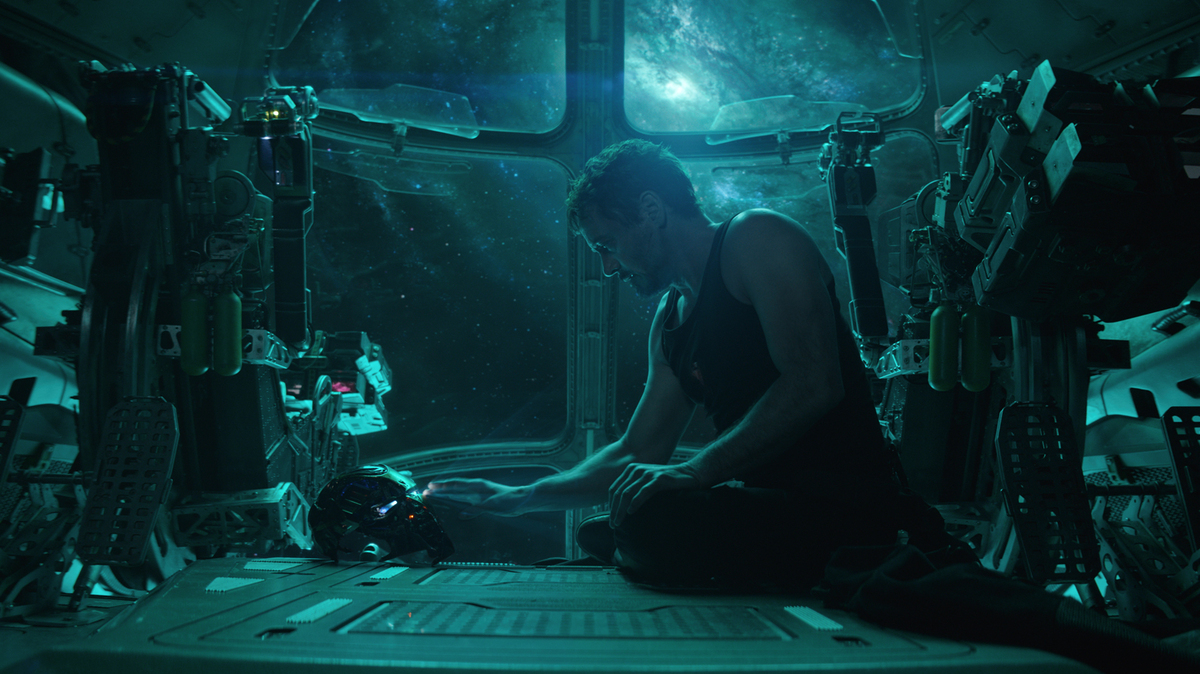 I ... was Iron Man: A stranded-in-space Tony Stark (Robert Downey Jr.) shares a somber moment with his suit's A.I.

Let's start with a bit of service journalism: Going into Avengers: Endgame, one would be well-advised to manage both one's expectations, and — given its three-hour-plus, intermissionless runtime — one's fluid intake.

The film deposits us, in medias res(igned), into a world sunk neck-deep in mourning, though it shows us only fleeting (albeit intriguing) glimpses of how that world's non-spandex contingent is muddling through somehow. No, the film's concerns are the same as ours: For more than a year now, we've wondered how the remaining Avengers (particularly founding parents Iron Man, Captain America, Black Widow, Hulk and Thor) would deal with the fact that 50 percent of the universe's living beings vanished into visually striking dust, due entirely to our heroes' collective failure to keep a certain giant purple mesomorphic despot from snapping his bedazzled fingers. (NOTE: This shattering cosmic event has been dubbed "The Snapture" by one minor media semi-luminary who shall remain me. NOTE THE SECOND: Marvel has not officially signed on to said coinage. NOTE THE THIRD: But they totally should. NOTE THE FOURTH: Because, come on.)

The film's decision to breeze over how fundamentally the world has changed around our heroes may have as much to do with directors Anthony and Joe Russo's desire to make a movie about the intersection of communal grief and personal guilt as it does with the fact that said film is being made in a post-The Leftovers media universe — after all, that series cornered the market on depicting what a collective, aching loss looks like on a global scale.

Instead, Avengers: Endgame burns through the first two hours showing us how its heroes have dutifully arranged themselves at various way stations along the spectrum of the Kubler-Ross stages of grief: wet-eyed denial, violent rage, disingenuous bargaining, beer-soaked depression and performatively optimistic (and not entirely sincere) acceptance. This is where the aforementioned expectation management will serve you well, particularly if one of the (perfectly reasonable!) expectations you're clinging to is that the culminating chapter of the Avengers saga must and should take the form of a wall-to-wall cosmic brawl, from the jump. Because the film's first two hours prove a resolutely intimate and unapologetically somber cinematic experience overall — albeit one punctuated by bracing and welcome jolts of humor from Chris Hemsworth's newly bleary Thor, Mark Ruffalo's freshly smarmy Hulk and Paul Rudd's as-always goofy Ant-Man.

OK, Let's Talk About The Ending Of 'Avengers: Infinity War'

It cannot possibly be a spoiler to note that our heroes — eventually — band together in an attempt to reverse the effects of The Snapture. Nor can it be a spoiler to note that said early attempts have no real hope of success, unless and until help arrives from unlooked-for sources. (The sheer narrative breadth of the Marvel Cinematic Universe, peopled (and raccooned and treed) as it is with so many different characters both Snaptured and un-, ensures that in any given story moment, our brains refuse to contain them all. So in those instances when unlooked-for help does arrive in the nick of time, it can't help but come as a surprise, because you'll have legitimately forgotten about its sources' existence.)

The Russos' decision to stick close to the experiences of the remaining Avengers proves a rewarding one, as they've expressly constructed the film as an extended victory lap for the Marvel Cinematic Universe writ large. Got a favorite character from any Marvel movie over the past decade, no matter how obscure? Prepare to get serviced, fan. Because the film's third and final hour contains extended references to every single Marvel film that has led up to this one — yes! even Thor: The Dark World! I'm as surprised as you are! — and part of the delight Endgame provides to the patient audience member is gauging the size of the cheer that greets the entrance of any given hero, locale or — in at least once instance — item of super-hardware.

Make no mistake: There will be cheers. And boos. And gasps. The final, climactic battle (come on, you knew there'd be one) is legitimately thrilling, because every one of its manifold delights is fueled by (a cynic would say coasting on) the warm familiarity that spending a decade with these characters has engendered.

Yes, on one level, it's just more smash-em-up superhero CGI spectacle, but it's spectacle so thoroughly grounded in a devoutly earned, hard-won and entirely undismissible affection that at one crucial moment, it is capable, using something as hopelessly cheesy, as ridiculous, as hokey, as idiotic, as childish as the onscreen utterance of a superhero catchphrase, of sending a lump to the throat.

That's not a thing that should happen, 22 films into a franchise owned and maintained by a bloated global mega-corporation that cares more about keeping its shareholders happy than any critic or audience member. And yet the sniffles I heard around me in the film's press screening were just as real as any quarterly earnings statement. Realer, on a human level. And they were a direct product of Marvel's learned ability, after so many accreted hours of cinematic storytelling, to target the emotions of Nerd and Normal alike with a laserlike, ruthless efficiency.

And if you're still balking at that runtime, consider: Of all the entertainments that take more than three hours to unspool — Verdi's Rigoletto, say, or O'Neill's Mourning Becomes Electra, or an NFL game — how many can be legitimately said to boast a ruthless efficiency?