Accessibility links
Opinion: Here's Why The Trump Administration's Iran Sanctions Strategy Won't Work The Trump administration can cause Iran severe pain, but it cannot trigger the collapse of the regime, argue Aaron David Miller of the Wilson Center and Richard Sokolsky of the Carnegie Endowment. 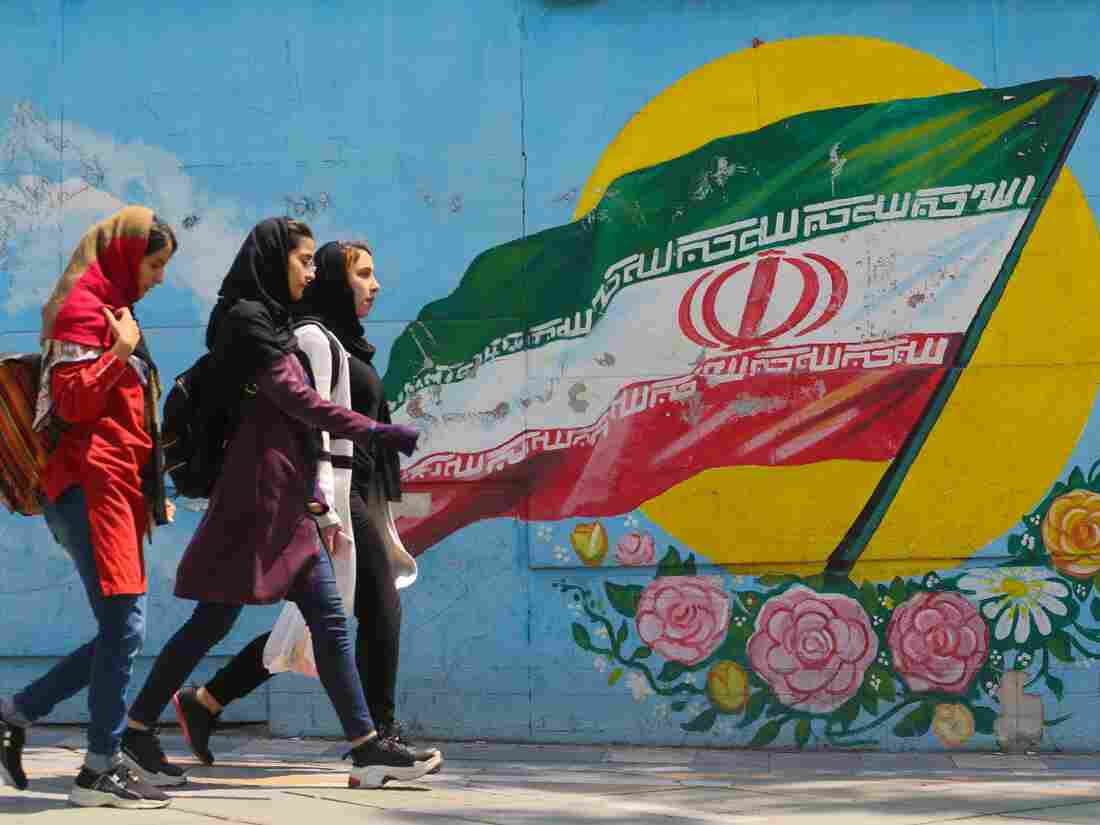 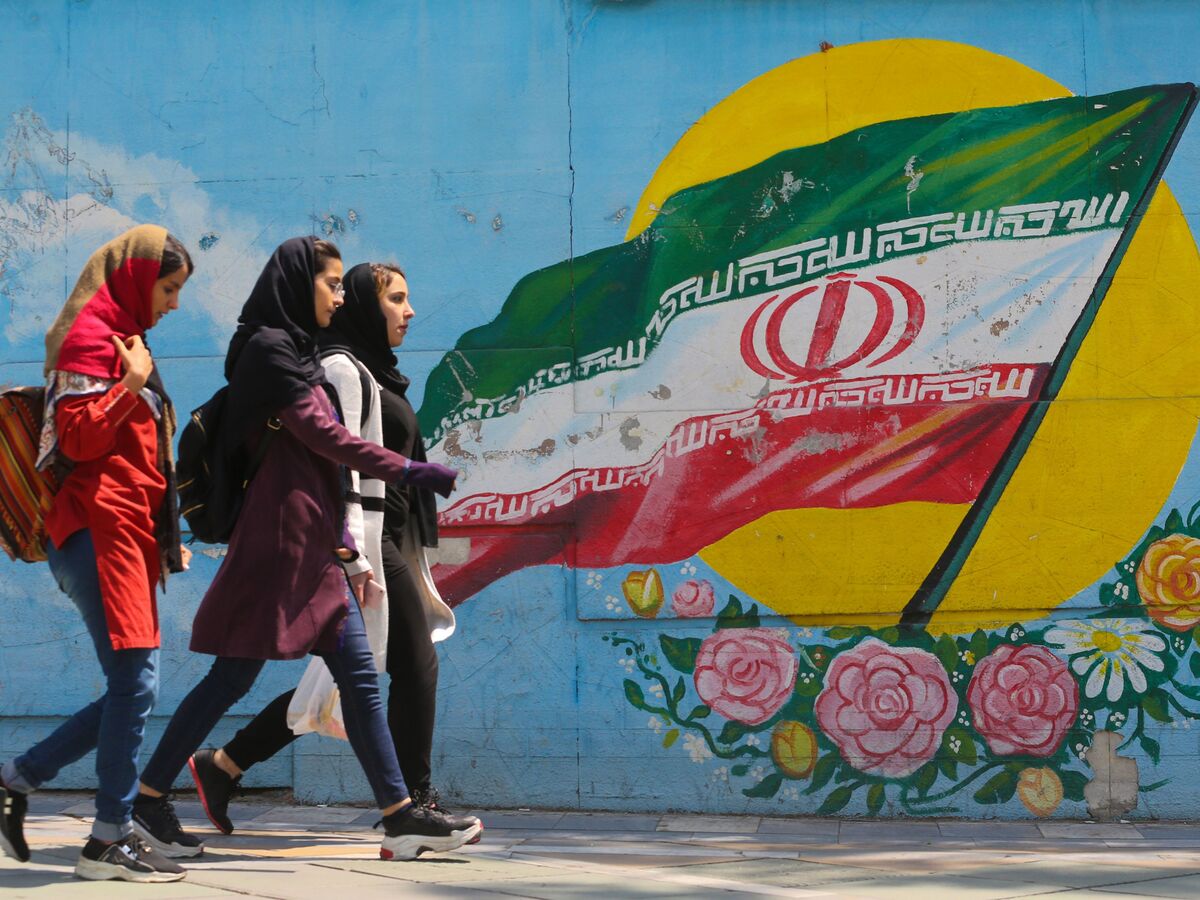 Young women walk past a mural showing the Iranian flag in Tehran on April 23. The White House announced Monday it was ending waivers exempting several countries from U.S. sanctions on Iranian oil exports.

Aaron David Miller (@aarondmiller2), a Distinguished Fellow at the Woodrow Wilson International Center for Scholars and a former State Department adviser and Middle East negotiator, is the author of The End of Greatness: Why America Can't Have (and Doesn't Want) Another Great President.

Richard Sokolsky, a nonresident senior fellow at the Carnegie Endowment for International Peace, was a member of the secretary of state's Office of Policy Planning from 2005-2015.

The Trump administration has clear goals for its policy toward Iran: Tehran should accept U.S. terms for renegotiating the nuclear deal it signed with Washington and other powers, end its baleful regional behavior and halt its development of ballistic missiles. What the administration doesn't have is a realistic strategy to achieve these goals.

Monday's announcement by Secretary of State Mike Pompeo canceling sanctions waivers the U.S. granted to eight countries importing Iranian oil will bring the administration no closer to closing this gap. On the contrary, it's a risky bet that's likely to inflict greater pain on the Iranian public without changing Tehran's behavior or weakening, let along changing, the regime.

Pressure — in the form of military threats, economic sanctions and diplomatic isolation — can be an effective tool if it's tethered to a comprehensive and realistic strategy that combines carrots and sticks. But a strategy that insists on getting 100 percent of what the administration wants while denying Iran anything it wants is doomed to failure.

The administration based its decision to cancel sanctions waivers on several assumptions: First, that Saudi Arabia and the United Arab Emirates would increase oil production to keep oil prices from escalating. Second, Iran's major oil customers — including China, India and Turkey — would reduce their oil imports from Iran to zero under the threat of additional U.S. sanctions. Third, Iran has limited options to drive up oil prices to maximize revenues from its residual oil exports.

The realities are not likely to play out as the U.S. assumes. Saudi Arabia and the UAE are unlikely to sustain higher production levels for very long, out of concern for stability in oil markets. Iran's "heavy oil," which many countries need for refined oil products, cannot be replaced by Saudi light crude. Turkey, China, India and possibly some European allies will find ways to work around U.S. sanctions for both economic and geopolitical reasons. And Iran can reduce oil supplies leaving the Persian Gulf. It has threatened to close the Strait of Hormuz, and could conduct cyber operations against oil infrastructure on the other side of the Gulf.

The U.S. waivers announcement came on the heels of the administration's decision to designate Iran's Islamic Revolutionary Guard Corps as a foreign terrorist organization. Neither of these U.S. decisions will fundamentally alter Iran's regional behavior.

The Iranian regime sees its support for Shia allies in Iraq, Syria, Lebanon and particularly Yemen as a vital national interest — a hedge against Sunni dominance and a counter to America's influence. It has already cut back somewhat on its funding for these regional priorities, and may be forced to curtail them even more. But Iran is prepared to endure great sacrifices to defend them. And its regional allies and proxies have their own motivations and means to align with Tehran and support its behavior.

Regime change is an illusion

Secretary of State Pompeo insists that the U.S. "maximum pressure campaign" is designed to bring Iran back to the negotiating table. That hardly seems credible. Both Pompeo and National Security Adviser John Bolton are longtime champions of regime change.

The 12 demands Pompeo issued last year to Tehran were, for all practical purposes, a demand for Iran's surrender on the nuclear deal, its regional behavior, its testing of ballistic missiles and other Iranian practices the U.S. doesn't like.

Iran is in no hurry to negotiate, preferring to wait Trump out in hopes he will be a one-term president and the next administration will return to the nuclear deal.

Regime change imposed from the outside is an illusion. Consider, for example, U.S. efforts to get rid of the Nicolás Maduro regime in Venezuela. The U.S. has scores of nations committed to the goal, geographical proximity, a legitimate opposition on the ground and a virtual stranglehold on the Venezuelan economy. Yet the U.S. and its allies aren't succeeding.

In contrast, the Iranian regime remains legitimate in the eyes of millions of Iranians, has been in place for four decades, retains tremendous repressive power, enjoys the support of Russia and China and faces no organized opposition on the ground. It is fantastical thinking to believe that Washington could get rid of the regime. If internal changes come, they will be driven primarily by Iranians themselves. In fact, Trump is likely to leave before the mullahs do.

The Trump administration can cause Iran severe pain, but it cannot trigger massive internal unrest that that will precipitate the collapse of the regime or a fundamental change in Iran's regional behavior.

Instead, the administration's strategy promises more hardship for the Iranian people, more tensions in the region, more divisions between the U.S. and its European allies — and more risks of a U.S.-Iranian conflict with unpredictable and dangerous consequences for America's interests in the Middle East.