Accessibility links
Bombers Who Carried Out Attacks In Sri Lanka Were 'Well-Educated,' Official Says The picture emerging of the perpetrators of Sunday's attacks that killed more than 350 people is one of relative privilege. The country's defense minister says one bomber had studied in the U.K. 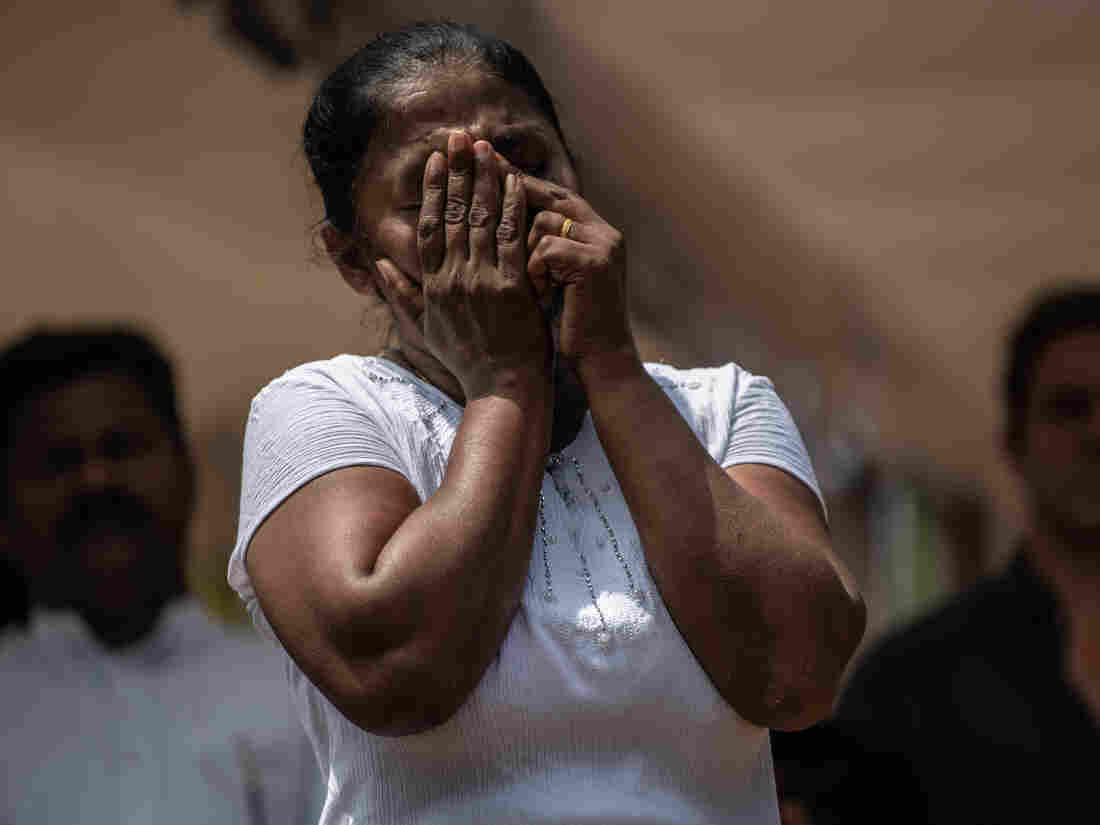 A woman is overcome with emotion as she attends the funeral of a person killed in the Easter Sunday attack on St. Sebastian's Church, on Wednesday in Negombo, Sri Lanka. Carl Court/Getty Images hide caption 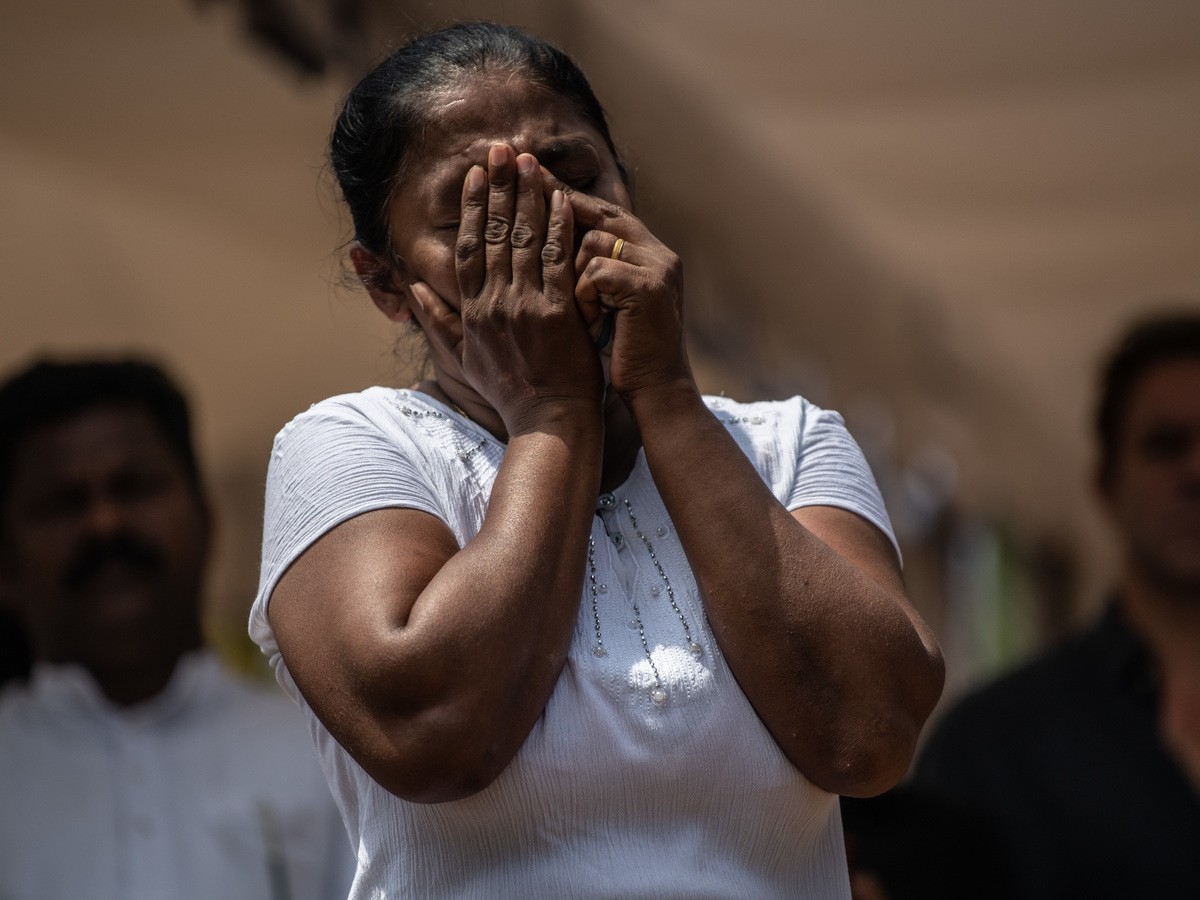 A woman is overcome with emotion as she attends the funeral of a person killed in the Easter Sunday attack on St. Sebastian's Church, on Wednesday in Negombo, Sri Lanka.

A husband and wife. A pair of brothers from a wealthy, upper-class family. A man with a law degree. Another who studied in the United Kingdom and did postgraduate work in Australia, before coming home to settle down in his native Sri Lanka.

Those are the profiles emerging Wednesday, according to Sri Lankan officials and local media, of the suicide bombers who killed more than 350 people in sophisticated, coordinated attacks on churches and hotels there on Easter Sunday. If the Islamic State's claim of responsibility is true, it would be the group's deadliest terror attack.

Speaking at a briefing on Wednesday, Deputy Defense Minister Ruwan Wijewardene said most of the attackers were "well-educated" and came from "middle-class" backgrounds.

"We believe that one of the suicide bombers studied in the U.K. and then maybe later on did his postgraduate in Australia, before coming back to settle in Sri Lanka," he said.

The U.S. ambassador to Sri Lanka, Alaina Teplitz, called it "incredibly tragic" that intelligence warnings about the suicide bombers' plans appear to have been missed.

"Clearly there was some failure in the system," Teplitz told reporters in the capital Colombo.

The FBI and U.S. military are helping to investigate, she said. While local officials admitted prior warnings had been received, the information did not reach the highest levels of Sri Lanka's government, lawmakers said. Teplitz said U.S. officials had not been made aware either.

Sri Lankan President Maithripala Sirisena has vowed to replace top defense and intelligence officials, and local media are reporting he has asked the country's police chief and defense secretary to resign.

In parliament, lawmakers traded barbs Wednesday, accusing one another of playing politics with intelligence, and even of supporting a domestic Islamist group that was virtually unknown before this week.

Information coming from lawmakers and government officials since Sunday has often been contradictory. Even before the attacks, Sri Lankan politics were in a state of disarray.

Last October, Sirisena sparked a constitutional crisis by firing Prime Minister Ranil Wickremesinghe, and later appointing a former president and strongman, Mahinda Rajapaksa, to replace him. That move was eventually rejected by Sri Lankan courts and many lawmakers, and the original prime minister was eventually reinstated. But Sirisena held control of the country's security apparatus and police — a decision that sparked anger among opposition lawmakers.

"By unlawfully holding on to the law-and-order portfolio, the president has now become the first person who should take responsibility for these attacks that could have been prevented," lawmaker M.A. Sumanthiran, who belongs to an opposition Tamil party, told parliament Wednesday.

The attacks hit almost 10 years to the day since the end of Sri Lanka's 26-year civil war. It was a secular, ethnic conflict that left several tens of thousands dead. At its height, suicide bombers struck many times in the capital Colombo. But the country has, until now, had no known Muslim extremist movement.

On Wednesday, police spokesman Ruwan Gunasekara told reporters that there were actually nine suicide bombers, not seven, as officials had previously said. The female bomber was the wife of another bomber, he said. She exploded herself along with her two children as police moved in to search a house they were in, in the aftermath of the attacks, Gunasekara said. Three police officers also died in that blast.

At least 60 people have been arrested so far, Gunasekara also said.

Another official, defense minister Ruwan Wijewardene, on Wednesday backed off claims that the Easter attacks were in retaliation for shootings last month at mosques in Christchurch, New Zealand. He told reporters that the mosque attacks may have been a motivation but that there was no direct evidence of that.