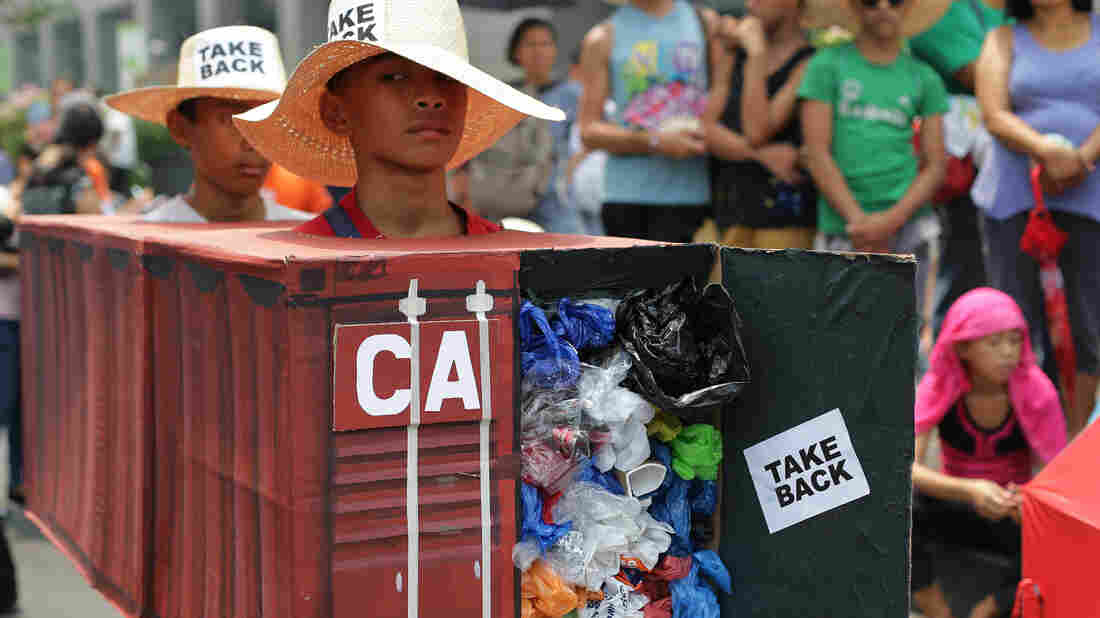 "I want a boat prepared" to take tons of trash back to Canada, Philippines President Rodrigo Duterte said Tuesday. In this 2015 photo, Filipino activists wear shipping container costumes to call on Canada to remove the garbage from a port in Manila. Aaron Favila/AP hide caption 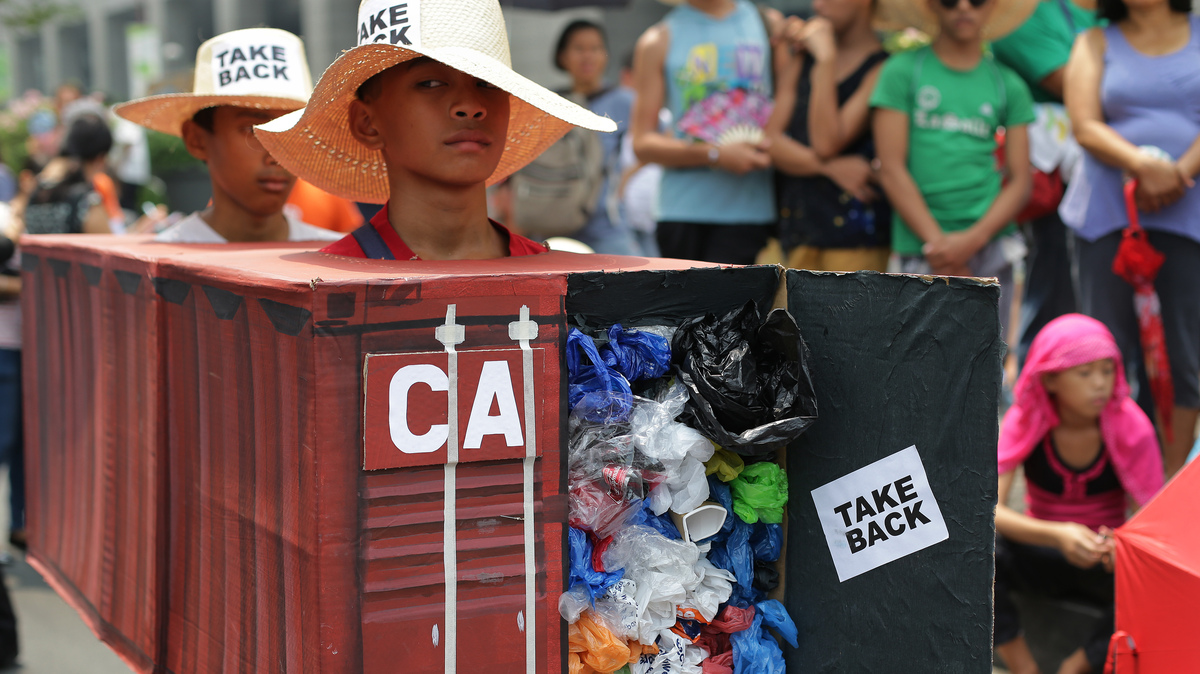 "I want a boat prepared" to take tons of trash back to Canada, Philippines President Rodrigo Duterte said Tuesday. In this 2015 photo, Filipino activists wear shipping container costumes to call on Canada to remove the garbage from a port in Manila.

Philippine President Rodrigo Duterte wants Canada to come get tons of trash that was wrongly sent to his country — and he's threatening extreme steps if Canada doesn't clean up the situation. "We'll declare war against them," Duterte said Tuesday.

The president was referring to a large shipment of municipal trash that has sat in Manila since its arrival in 2013 and 2014. The more than 100 shipping containers had been declared to hold recyclable plastic. But when the doors were opened, customs officials found "household trash, plastic bottles and bags, newspapers, and used adult diapers," according to Filipino news outlet ABS-CBN.

"I will not allow that kind of s***," Duterte said at a news conference Tuesday, adding that Canada has attempted to provide educational grant money to the Philippines — on the condition that it also accept the garbage.

Duterte said he wants the trash gone within a week, even if he has to return it by force.

Both the garbage and the argument over its fate have been ripening for several years. In 2016, a Filipino court ruled that the garbage should return home. But since then, the case has continued to simmer.

In response to Duterte's remarks, Canada says it has already been working to resolve the trash dispute, adding that it has changed its regulations about hazardous waste shipments.

On Wednesday, Canada's Embassy in the Philippines said, "A joint technical working group, consisting of officials from both countries, is examining the full spectrum of issues related to the removal of the waste with a view to a timely resolution."

It added that Canada is committed to ensuring the waste "is processed in an environmentally responsible way."

As for Duterte's threat of starting a war over the trash, Canadian Ambassador to the Philippines John Holmes was quoted by ABS-CBN saying, "I won't comment on the specific words of the president or his tone, but I will say this: Our prime minister committed and has recommitted to resolving this issue, including taking the waste back to Canada."

As Canada's CBC reports, an environmental law firm in Canada issued a legal opinion last week accusing Canada of being "in violation of the international Basel Convention, which forbids developed nations from sending their toxic or hazardous waste to developing nations without informed consent."

Duterte addressed the trash topic at the end of a news conference about two strong earthquakes that hit the Philippines Monday and Tuesday, causing at least 16 deaths. After focusing on the latest updates in the recovery effort, the president spent several minutes discussing the garbage fight.

"I want a boat prepared," Duterte said, tapping a conference table for emphasis. "I'll give a warning to Canada, maybe next week, that they better pull that thing out — or I will set sail" and return the rubbish.

"I cannot understand why they're making us a dump site," Duterte said.

Duterte said he doesn't care what Canada does with the garbage: "Eat it if you want to."

He jokingly suggested Canadians should prepare a gala reception to mark the repatriation of the refuse, which dates from the previous Filipino administration headed by President Benigno Aquino III.

"Prepare and celebrate," Duterte said, "because your garbage is coming home."