Accessibility links
Rapid Rehousing Programs Get Homeless Off The Streets, But For How Long? Los Angeles has a large and growing homeless population. A program called rapid rehousing gets people into homes quickly. But it isn't a long-term fix to the region's larger housing crisis. 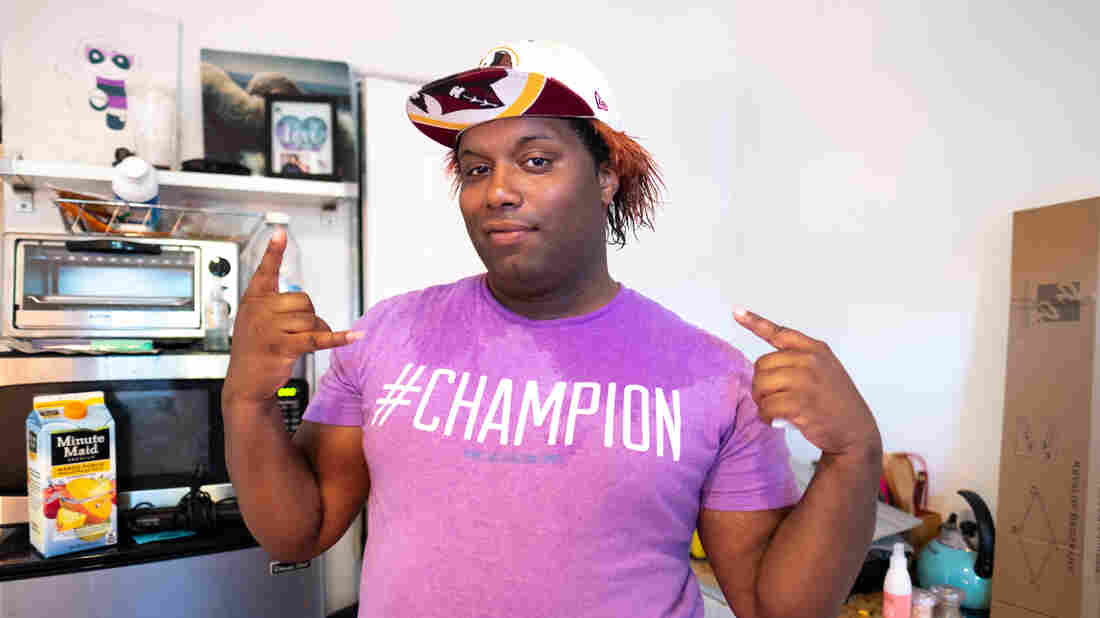 Relly Brown in their one-room apartment near Los Angeles' Koreatown. They were housed in a rapid rehousing program for the homeless that provides short-term rental vouchers for apartments. Brown now has to begin paying their own rent. Amy Ta/KCRW hide caption 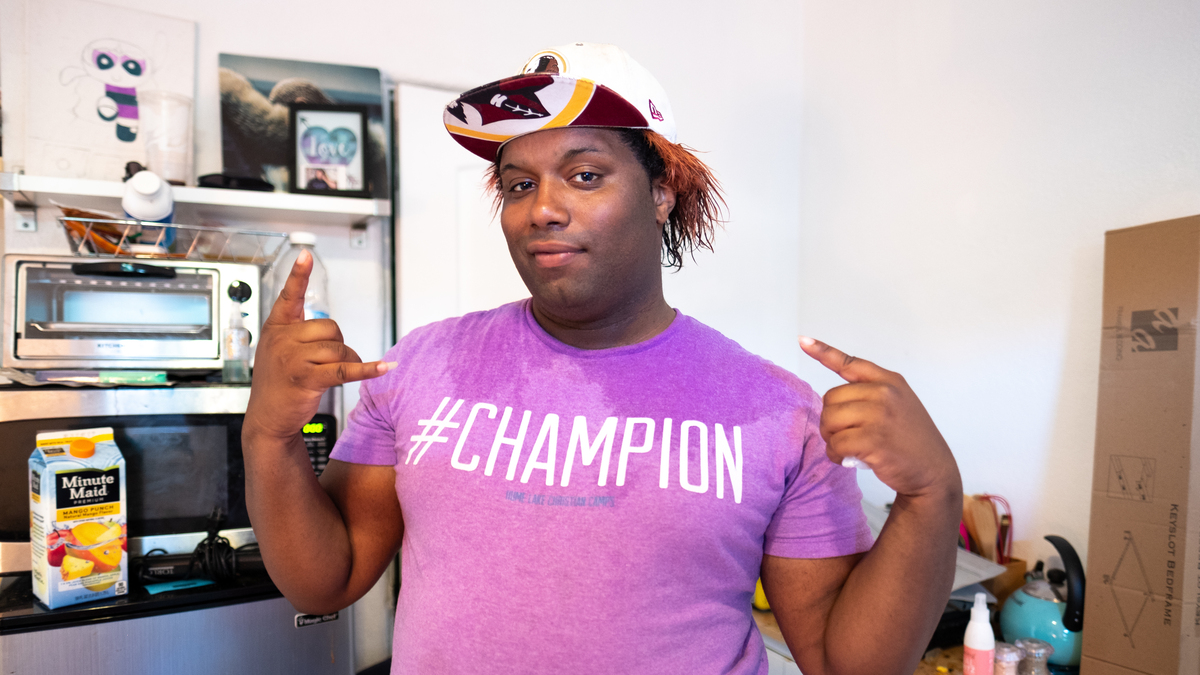 Relly Brown in their one-room apartment near Los Angeles' Koreatown. They were housed in a rapid rehousing program for the homeless that provides short-term rental vouchers for apartments. Brown now has to begin paying their own rent.

Relly Brown's ground-floor apartment near Los Angeles' Koreatown neighborhood still resembles the hotel room it once was: four walls, no kitchen and a mattress that takes up half the floor. A shade is drawn over the only window, keeping it dim and reasonably cool on a warm spring afternoon.

"I'm living in a box," said Brown, 26, who was placed here in December through a program called rapid rehousing, which provides short-term rental vouchers to use on the private market. Typically, the subsidies cover security deposits and the first three to six months of rent.

Rapid rehousing has become a go-to strategy for housing LA's homeless in recent years, with $73 million a year from a recent sales tax increase going to the program.

I came from a dark place. It's grand to just finally have something that I could call mine. I could come home every night, lock my door, know that I'm safe.

Brown, who doesn't identify as male or female and uses the pronoun "they," was among 8,222 people enrolled in rapid rehousing last year. Despite the tiny living quarters, they're grateful. Early last year, they were sleeping on the streets of Hollywood.

"I came from a dark place," Brown said. "It's grand to just finally have something that I could call mine. I could come home every night, lock my door, know that I'm safe."

But here's the catch: After an initial period with no out-of-pocket payments, rapid rehousing tenants gradually take on the rent themselves. Usually the assistance expires within a year, though it can be extended for up to two.

Rapid rehousing was designed for people experiencing homelessness who have a good chance of paying for their own housing after a one-time boost. But, the Los Angeles Homeless Services Authority, which oversees the program, is using the program to house a much wider segment of the homeless population.

To Help The Homeless, Some In LA Are Giving Them A Place To Stay

"It's flexible," said Heidi Marston, chief program officer for the Homeless Services Authority. "It can be a short-term kind of intervention. ... It can also be a longer-term intervention."

But New York City ran a similar rapid rehousing program between 2005 and 2011, and one researcher who studied the program says the gains didn't last.

"Everybody thought we were going to have this great success. We created a great number of problems that they've never been able to get their arms around again."

After being placed in a home, holders of rapid rehousing vouchers work up to paying their full housing costs. Brown had to pay a portion of their rent for the first time in April — $300. In May, Brown's payment will double to $600. In June it goes up to $900, then continues rising until it reaches the full monthly rate of $1,200.

Brown is already struggling to keep up but has a couple of part-time job interviews coming up, one for a company that does crowd control at events and the other at an amusement park.

"Hopefully I'll work both of them," they said. "Then ... when the time comes, I can just pay without a problem."

If Brown succeeds in catching up to the rent, they will have beaten the odds. Only one in five people with rapid rehousing increase their incomes at all before the subsidy runs out, according to the Homeless Services Authority. For those who do, it's usually by $200 a month or less. In a city where the average rent is more than $2,000 a month, going from homeless to paying market rate within a year or even two is a steep if not impossible climb.

Officials say they don't expect everyone to complete the program. Sometimes, Marston says, rapid rehousing is only a temporary steppingstone. A year or more in the program can buy someone time to join a supportive housing waitlist, reconnect with family or work out some other long-term plan. Sometimes, after the subsidy runs out, people leave LA for places with cheaper rent. But other times, people fall through the cracks.

David Bensoussan, 41, is a landlord who makes his living renting rooms to people at the bottom of L.A.'s housing market: ex-cons, newly sober people and the formerly homeless. He owns about 20 houses and duplexes, which he rents to nonprofits that sublease rooms to their clients. A typical room in one of his properties goes for about $700 a month.

At one point, Bensoussan had more than two dozen rapid rehousing clients. The people who arrived, however, needed more than a room. One of his first renters in the program, Bensoussan says, was a typical case: He arrived upbeat and optimistic about his prospects for work. Within months, however, the man lost weight, acted erratically and appeared under the influence of drugs.

"Sure enough," said Bensoussan, "his voucher runs out, and two months afterwards he hasn't paid any rent."

Bensoussan says he wasn't able to get help from the nonprofit that had placed the man, so to avoid the hassle and expense of an eviction, he gave the tenant $1,000 to leave. "No clue where he went," said Bensoussan. He estimates that the same thing happened with two out of three of his rapid rehousing tenants. Eventually, he stopped accepting rapid rehousing vouchers.

Marston of the Homeless Services Authority says people with addiction or other needs beyond homelessness are put into the rapid rehousing program only with intensive case management.

"Individuals who have a higher service need ... tend to be as successful if not more successful than those who just fell on hard times," she said. "We see equal outcomes in terms of people who are able to sustain at the end of the subsidy."

According to Marston's office, nearly 18,000 people have been placed in homes through rapid rehousing in the past three years. About half either are still in the program or moved on to other forms of subsidized housing. The rest exited rapid rehousing with no ongoing subsidy. While county officials don't track what happens to every individual, 7% of the people who have completed the program were later documented returning to homeless shelters.

You have to use [rapid rehousing] with caution. It's good for a certain segment, and it's not good for the rest. This one-size-fits-all policy is a mistake.

Cities and counties all over the United States have rapid rehousing programs. New York City's was credited with moving 33,000 families out of homelessness. But Nunez, of the Institute for Children, Poverty, and Homelessness, says more than half eventually fell back into homelessness.

"You have to use it with caution," he said of rapid rehousing. "It's good for a certain segment, and it's not good for the rest. This one-size-fits-all policy is a mistake."

Nationally, research suggests that most people with rapid rehousing remain housed for the first few years after the program but continue to struggle to pay rent because rapid rehousing doesn't solve the underlying issue driving homelessness in expensive cities like LA: a severe lack of affordable housing.

As Marston from LA's Homeless Services Authority puts it, "[Rapid rehousing] doesn't address the fact that our cost of living in Los Angeles is far outpacing our minimum wage." It's estimated that Los Angeles County needs more than 500,000 units of low- and very low-income housing to meet the demand.

Still, Brown is optimistic. They say they've discussed moving into group housing with their social worker, but they're hoping to avoid it. Still, anything is better than where they were.

"You know when you think of the worst thing you can think of?" Brown asked. "In my mind it was going back out on the streets."