Accessibility links
In 'The Beneficiary,' Janny Scott Weighs The Emotional Heft Of Inheritance Janny Scott, a biographer and award-winning reporter for The New York Times, has written a vivid and penetrating memoir about her own illustrious family. 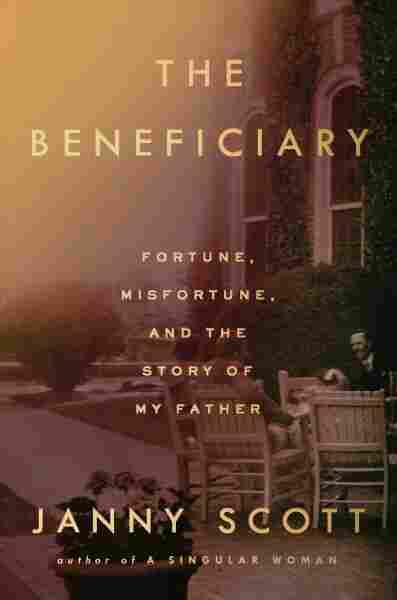 Fortune, Misfortune, and the Story of My Father

Title
The Beneficiary
Subtitle
Fortune, Misfortune, and the Story of My Father
Author
Janny Scott

Many years ago, I worked as an academic day laborer on Philadelphia's Main Line. For those unfamiliar with it, the Main Line — developed in the late 19th century along a railroad route west of the city — was, for decades, a quietly grand stretch of lavish estates, private schools, and cricket and golf clubs catering to Philadelphia's old money. The classic 1940 romantic comedy, The Philadelphia Story, starring Katharine Hepburn as a snooty socialite, was set on the Main Line.

Hepburn herself attended Bryn Mawr College, one of the Main Line institutions I was adjunct teaching at to cobble together a living. At the end of a work day, I'd ride back to Philadelphia aboard the commuter train, staring through the always grimy windows at all the charming houses and landscaped gardens passing by. I envied the folks who lived inside those houses and what I saw as their legacy of ease and beauty. Janny Scott lets me know I was nothing but a stranger in a strange land, incapable of decoding the more intricate stories flickering before my eyes.

Scott, who was an award-winning reporter for The New York Times, has written a vivid and penetrating memoir, called The Beneficiary, about her own illustrious Main Line family and the hefty emotional weight of inheritance. To give you a quick sense of her pedigree, Scott's great-great-grandfather was a railroad baron and mentor to Andrew Carnegie; her daring and glamorous grandmother, Helen Hope Montgomery Scott, was said to be the inspiration for the Hepburn character in The Philadelphia Story. Growing up, Scott and her siblings (along with four generations of relatives) lived in houses scattered over an 800-acre Main Line estate, which also boasted stables, a dairy farm, swimming pools, and "a couple of one room schoolhouses."

Occasionally playing to the base desires of us proletarians eager to hear absurd things about WASPs, Scott recalls the Sunday night suppers, presided over by her grandparents, at "the big house," that were required attendance. On the menu: "cold roast beef," a "hodgepodge" Scott's parents called "vomit salad," and "mint chocolate chip ice cream with a dusting of Nestle's chocolate powder." One unhappy in-law described the ritual as the "Sunday Night Ghastlies."

As a young adult, Scott says, the oddness of her upbringing began "to come into focus." Early in this memoir, she tells a story about herself as a college student, catching a ride home with a friend, whom she describes as "a brainy, serious-minded, first-generation American":

"We were approaching my parents' house, [Scott recalls] "passing a wall of evergreens through which one could catch sight of the fenced fields beyond. 'Where are the slave quarters?' my friend asked, teasing, sort of. . . .

"I knew the place intimately" [Scott says]. I understood it not at all."

The Beneficiary is Scott's clear-eyed attempt to understand that place and the privileged-but-hermetically-sealed life it gave to her family. She sets out to scrutinize the hidden, soul draining costs of having an entire life — education, career, marriage — prefabricated for you before birth. Above all, though, Scott yearns to understand "the beneficiary" who's most elusive and compelling to her: that would be her father, Robert Montgomery Scott, a clubby "public-spirited, socially alert patrician," who served as president of the Philadelphia Museum of Art.

Scott's father nursed a somewhat socially acceptable lifelong addiction to alcohol, as well as a socially unacceptable struggle with depression and a persistent sense of inauthenticity. After his death, Scott unearths the decades' worth of journals her father bequeathed to her. His voice is arresting in its despair. Listen to this entry in which he talks about his marriage:

"I am married to a charming spoiled wife with whom I have little in common but background. My failure at the tennis court eliminated what she felt to be the sphere in which we would have experiences together, and the result is that we have no common experiences, except our background. We live our background. Our house is our two generations of money flowing into more of culture. This is no way to live."

Scott judiciously quotes from her father's journals; but, whenever she does so, it's evident that there have been at least two gifted writers in her family: father and daughter. The Beneficiary is a wise and poignant memoir about all the things money can buy — and all the things it can't.