Accessibility links
Joe Biden 2020 Presidential Campaign Launches The 76-year-old former vice president focused on President Trump's response to Charlottesville in his announcement. He enters the presidential race with renewed scrutiny of his decades in public life. 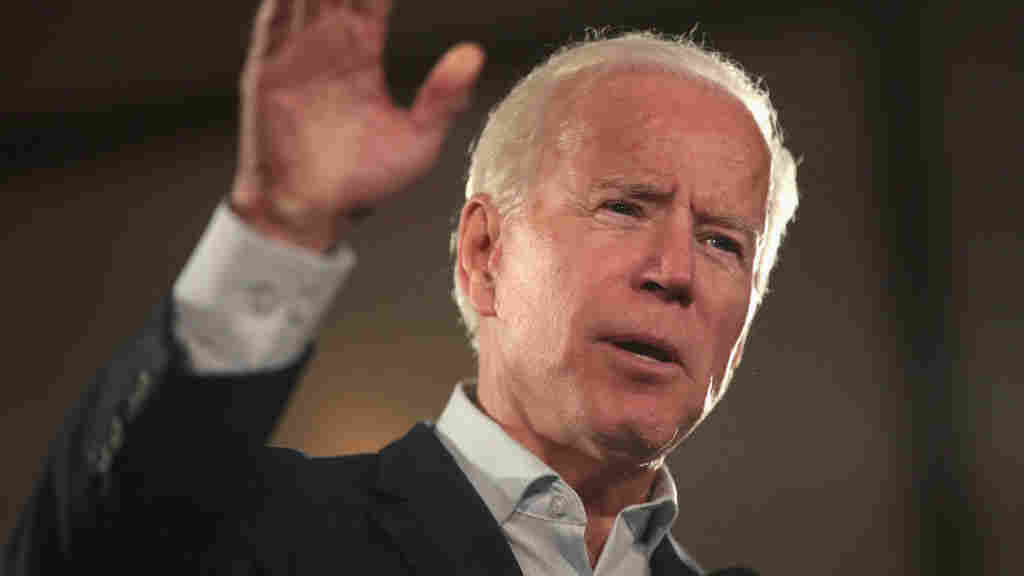 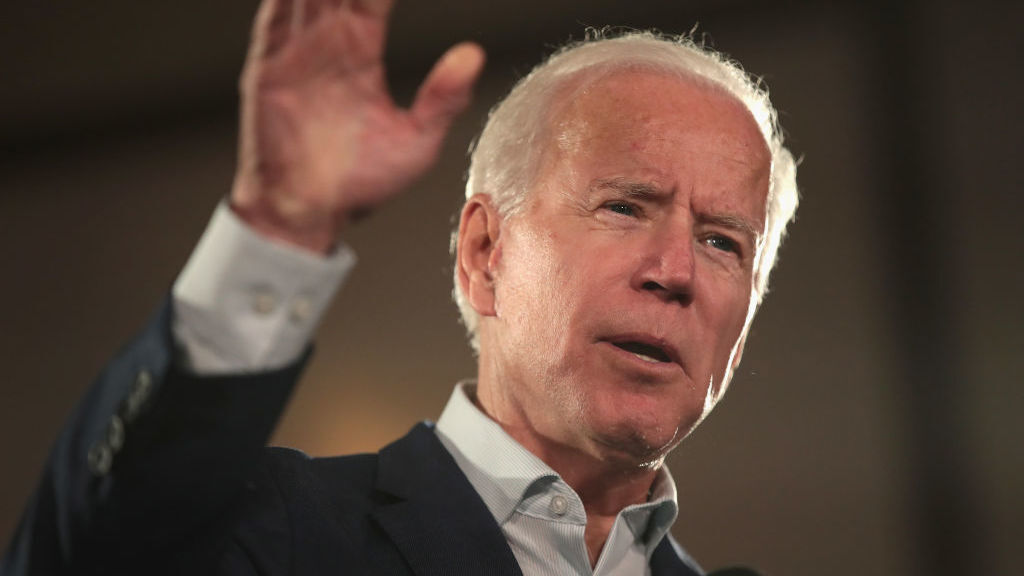 Former Vice President Joe Biden hasn't hidden his presidential aspirations since leaving office in 2017, and didn't appear deterred by accusations of inappropriate contact over the past several weeks either.

After months of oscillating speculation, followed by a long ramp up that drew out uncomfortable reassessments of his long public career, former Vice President Joe Biden has announced that he will run for president in 2020.

Biden made the announcement in a video released on Thursday. He's expected to head to Pittsburgh for a kickoff event next week, highlighting the focus the latest Democratic candidate places on winning back key states President Trump flipped in 2016.

Biden's announcement focuses on a "battle for the soul of this nation," with a dramatic video centered around the 2017 white supremacist protest in Charlottesville, Va., and President Trump's response that there were "very fine people on both sides" after a counterprotester was killed.

"In that moment, I knew the threat to this nation was unlike any I had ever seen in my lifetime," Biden says in the video.

The core values of this nation… our standing in the world… our very democracy...everything that has made America -- America --is at stake. That’s why today I’m announcing my candidacy for President of the United States. #Joe2020 https://t.co/jzaQbyTEz3

"I believe history will look back on four years of this president and all he embraces as an aberrant moment in time," Biden adds. "But if we give Donald Trump eight years in the White House, he will forever and fundamentally alter the character of this nation — who we are — and I cannot stand by and watch that happen."

The 76-year-old former Delaware senator immediately becomes a top contender vying for the Democratic nomination, four years after passing on a bid for the White House in the wake of his son Beau's death. However, he will surely face questions about his age, past positions on policing and actions toward women in the wake of the #MeToo era. Biden is the 20th candidate to enter the Democratic primary race.

The president added: "I only hope you have the intelligence, long in doubt, to wage a successful primary campaign. It will be nasty - you will be dealing with people who truly have some very sick & demented ideas. But if you make it, I will see you at the Starting Gate!"

Welcome to the race Sleepy Joe. I only hope you have the intelligence, long in doubt, to wage a successful primary campaign. It will be nasty - you will be dealing with people who truly have some very sick & demented ideas. But if you make it, I will see you at the Starting Gate!

Former President Barack Obama held off on endorsing his vice president, instead releasing a glowing statement from his office: "President Obama has long said that selecting Joe Biden as his running mate in 2008 was one of the best decisions he ever made. He relied on the Vice President's knowledge, insight, and judgement throughout both campaigns and the entire presidency. The two forged a special bond over the last 10 years and remain close today."

Biden immediately picked up endorsements from some Democratic senators, including both senators from his home state of Delaware, Chris Coons and Tom Carper. Biden is also being backed by moderate Democratic Sens. Doug Jones of Alabama and Bob Casey of Pennsylvania.

Progressive pushback was also swift. The group Justice Democrats, aligned with Rep. Alexandria Ocasio-Cortez, D-N.Y., released a statement saying, "The old guard of the Democratic Party failed to stop Trump, and they can't be counted on to lead the fight against his divide-and-conquer politics today."

As Biden softened the ground to launch his campaign, he hit plenty of rocks. The potential candidacy was threatened recently by accusations of unwanted touching by several women. Biden has had to defend his "tactile" approach amid a major culture shift. A former Nevada Democratic candidate, Lucy Flores, came forward in March to say the former vice president had grabbed her shoulders from behind, sniffed her hair and then planted a kiss on the back of her head before a campaign event in 2014. Similar instances have been captured on video or photo as Biden performed official ceremonies and appeared at other events throughout the years.

Biden would eventually acknowledge that his behavior made others uncomfortable. He released a video message to say in part, "Social norms are changing. I understand that, and I've heard what these women are saying. Politics to me has always been about making connections, but I will be more mindful about respecting personal space in the future."

Days later, Biden cracked a joke about the incidents during a speech to a union group. He told reporters afterwards that while he was "sorry that I didn't understand more," he also was "not sorry for my intentions" and "not sorry for anything I've ever done."

Biden hasn't hidden his presidential aspirations since leaving office in 2017 and didn't appear deterred by the controversies over the past several weeks either. He has visited early primary states, such as Iowa and New Hampshire, and he campaigned on behalf of several Democratic candidates during the 2018 midterms. Part of that travel was because of his book, Promise Me, Dad: A Year of Hope, Hardship, and Purpose, which reflected on Beau Biden's 2015 death from brain cancer at just 46 years old.

His son's passing would have been the major impediment for Biden in 2016 — prompting a very public struggle over whether he could put aside his grief for a grueling campaign. Ultimately, Biden decided he could not, and in a White House Rose Garden speech in October 2015, flanked by his wife, Jill, and President Barack Obama, announced he would not be a presidential candidate.

"As my family and I have worked through the grieving process, I've said all along what I've said time and again to others: That it may very well be that the process, by the time we get through it, closes the window," Biden said. "I've concluded it has closed." 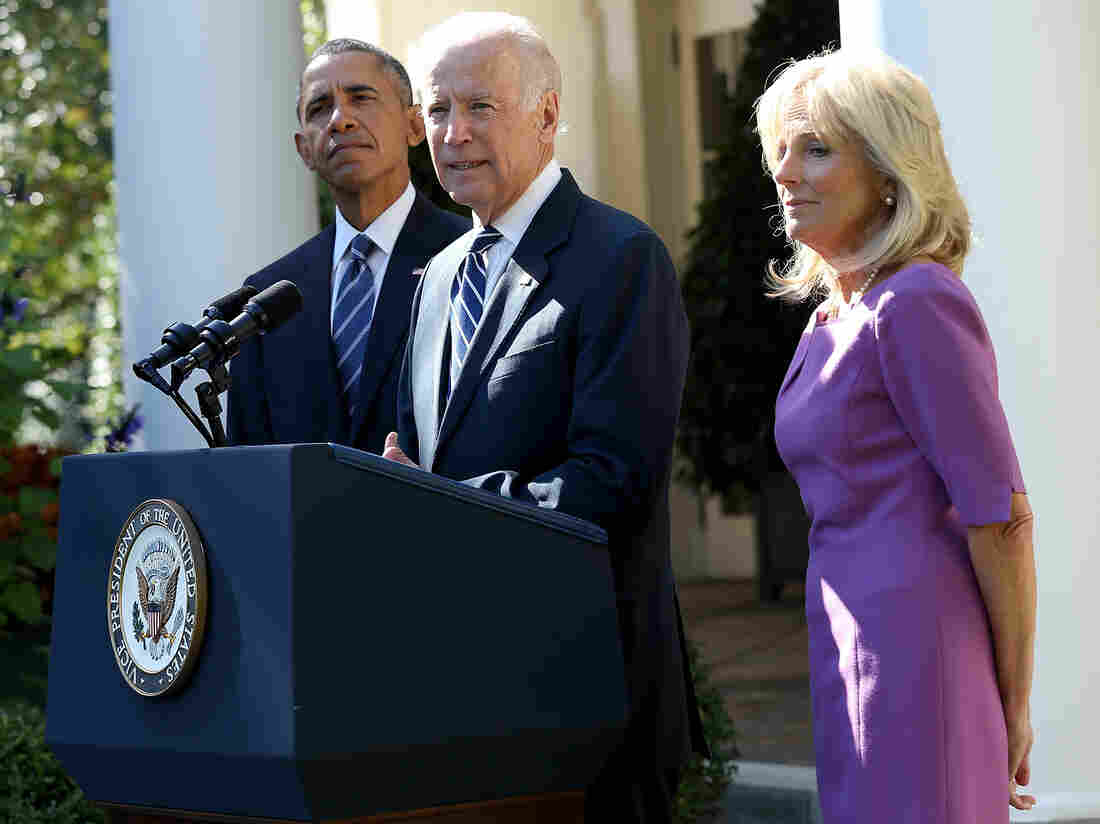 On Oct. 21, 2015, then-Vice President Joe Biden appeared alongside his wife Jill and President Obama to announce that he would not run for president 2016, in the aftermath of his son Beau's death from brain cancer. Win McNamee/Getty Images hide caption 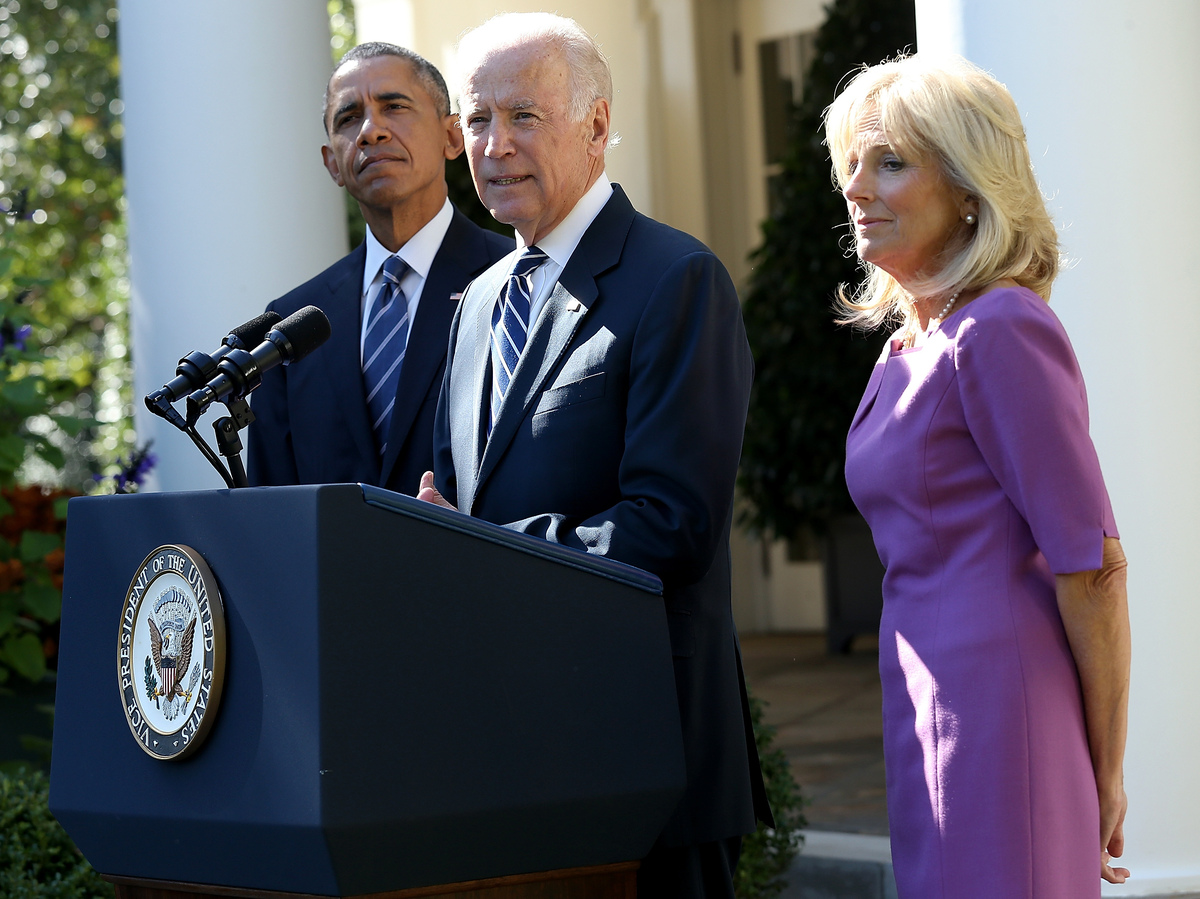 On Oct. 21, 2015, then-Vice President Joe Biden appeared alongside his wife Jill and President Obama to announce that he would not run for president 2016, in the aftermath of his son Beau's death from brain cancer.

If February, Biden revealed during an interview at the University of Delaware that his family is fully on board and that his wife, Jill, children Hunter and Ashley, and his grandchildren have "prodded" him to run.

"No matter who runs — it's a very difficult campaign," Biden told presidential historian Jon Meacham. "The primary will be very difficult. And the general election, running against President Trump, I don't think that he's likely to stop at anything, whomever he runs against."

Biden outlined his potential campaign message during appearances like that, as well as in a speech in March before a major firefighters union.

"We can't be defined — we're not able to be defined — by race, by religion, by tribe. We're defined by those enduring principles that are in the Constitution," Biden said, "that in America, everybody gets a shot. That's what the next president of the United States needs to understand, and that's what I don't think this current president understands at all."

It was clear during 2016 and beyond that Biden missed being a part of the political action. After watching Democratic nominee Hillary Clinton lose to Donald Trump, Biden's criticism of the new president increased. Earlier this year, Biden said at a Florida rally that he would have taken Trump "behind the gym and beat the hell out of him" in high school. Biden later said he regretted the phrasing, but the president retorted that Biden "would not last long" in a fight with him.

This will be Biden's third run for president. His first try came in 1988, ending amid plagiarism revelations. In 2008, Biden failed to gain any traction in the primary, but Obama did choose him as a running mate, bringing international experience from his time leading the Senate Foreign Relations Committee, something the junior senator from Illinois lacked. Their unlikely pairing ended up building a famous friendship, and the two enjoyed a good rapport and working relationship while in the White House and after, referring to each other as a "brother."

Biden's four-decade tenure in the Senate will also come under a microscope. The Washington Post recently examined his opposition to busing in 1975 as schools were struggling to desegregate and found that he suggested that the government's role in integration should be limited. He has pushed for legislation to lengthen criminal drug sentences, which overwhelmingly affected minorities and have been revisited lately in new criminal justice reform efforts. 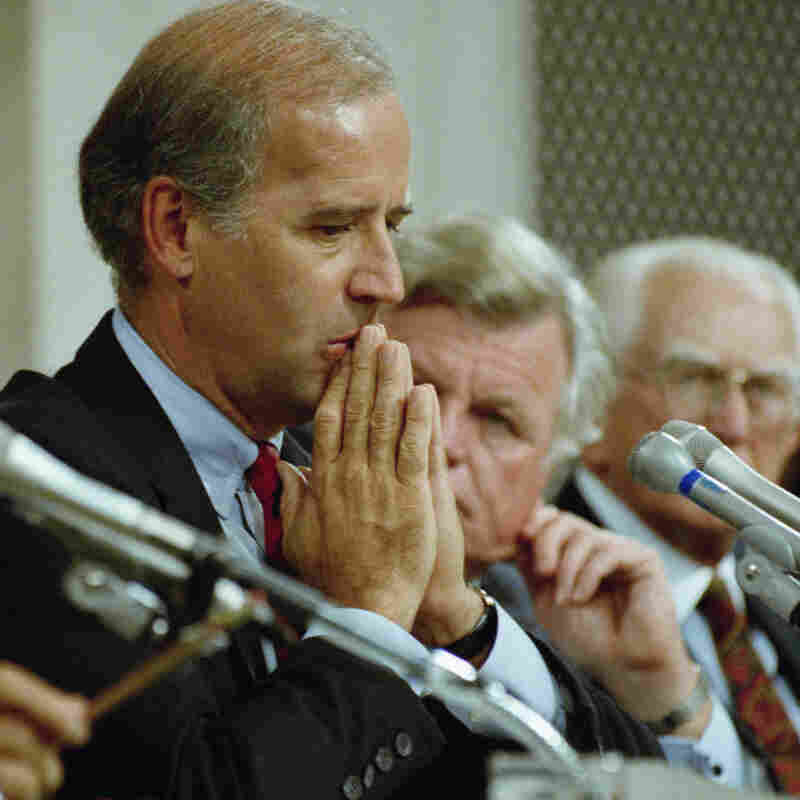 Joe Biden served as chairman of the Senate Judiciary Committee during the confirmation of Supreme Court Justice Clarence Thomas in 1991. Biden chaired the hearings in which law professor Anita Hill testified that Thomas had sexually harassed her. Greg Gibson/AP hide caption

Biden's handling of confirmation hearings in 1991 for Supreme Court Justice Clarence Thomas has also come under new scrutiny in the wake of last year's controversial confirmation hearings for Justice Brett Kavanaugh, who was accused of sexual assault. Thomas was accused by Anita Hill of sexual harassment, and Biden's handling of the process as Senate Judiciary Committee chairman has been criticized because of unanswered attacks against Hill and the fact that witnesses were not called who might have supported her story.

Biden's campaign said on Thursday that he has spoken privately with Hill and "shared with her directly his regret for what she endured and his admiration for everything she has done to change the culture around sexual harassment in this country."

Hill responded in an interview with the New York Times on Thursday. "I cannot be satisfied by simply saying I'm sorry for what happened to you. I will be satisfied when I know there is real change and real accountability and real purpose," she said.

All those concerns amid questions about his conduct toward women — and that Biden would be almost 78 on Election Day 2020 and is a white male in a party with younger, more diverse and more progressive presidential candidates — are challenges for Biden's candidacy, even if many early polls show he is atop the field in large measure because he is so well-known.

Biden is popular with African American voters, a significant segment of the Democratic primary electorate. But with two high-profile black candidates in the race, California Sen. Kamala Harris and New Jersey Sen. Cory Booker, and his past record on criminal sentencing, Biden could face strong challenges for that voting bloc.

While he does bring strength in Rust Belt states that Trump was able to win, other candidates could offer similar assets such as Minnesota Sen. Amy Klobuchar and South Bend, Ind., Mayor Pete Buttigieg. If voters indeed want someone of a newer generation, Biden could be challenged by many of the candidates, including former Texas Rep. Beto O'Rourke.