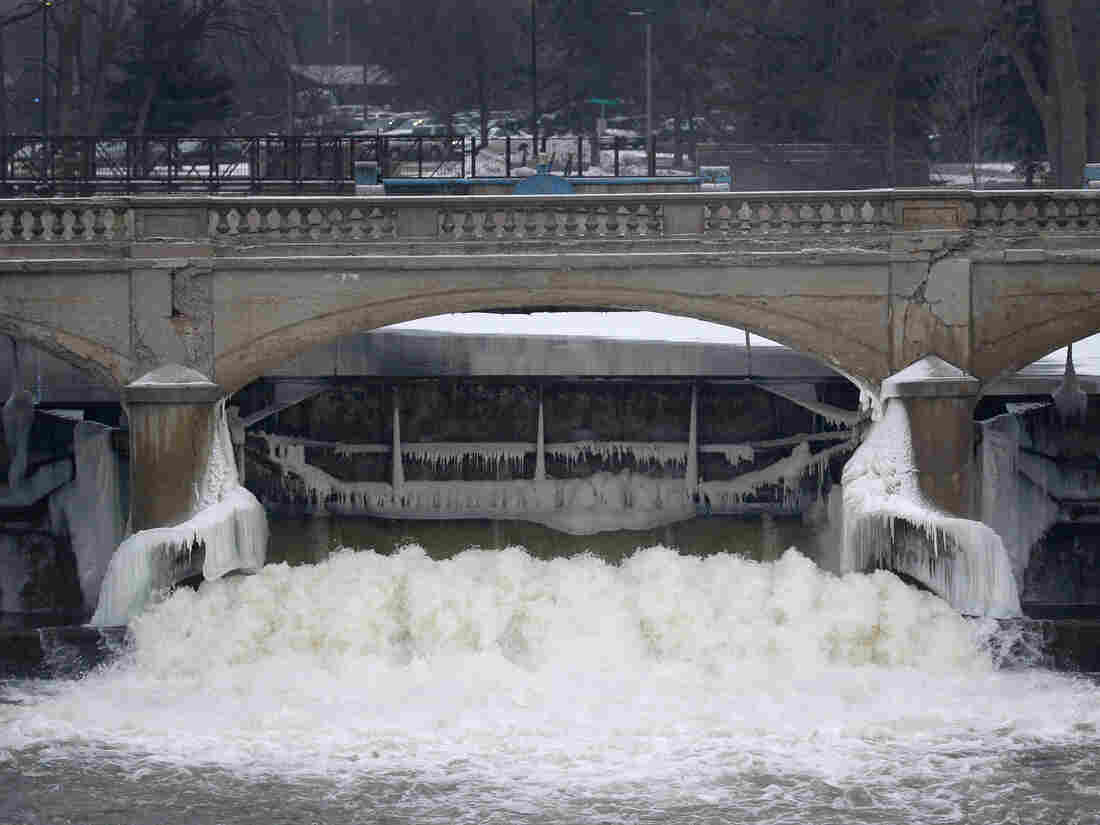 Water from the Flint River flows through the Hamilton Dam. In 2014, the city switched from Detroit's water system to the Flint River, setting the stage for a crisis that sickened residents and cost the mayor and other officials their jobs. Paul Sancya/AP hide caption 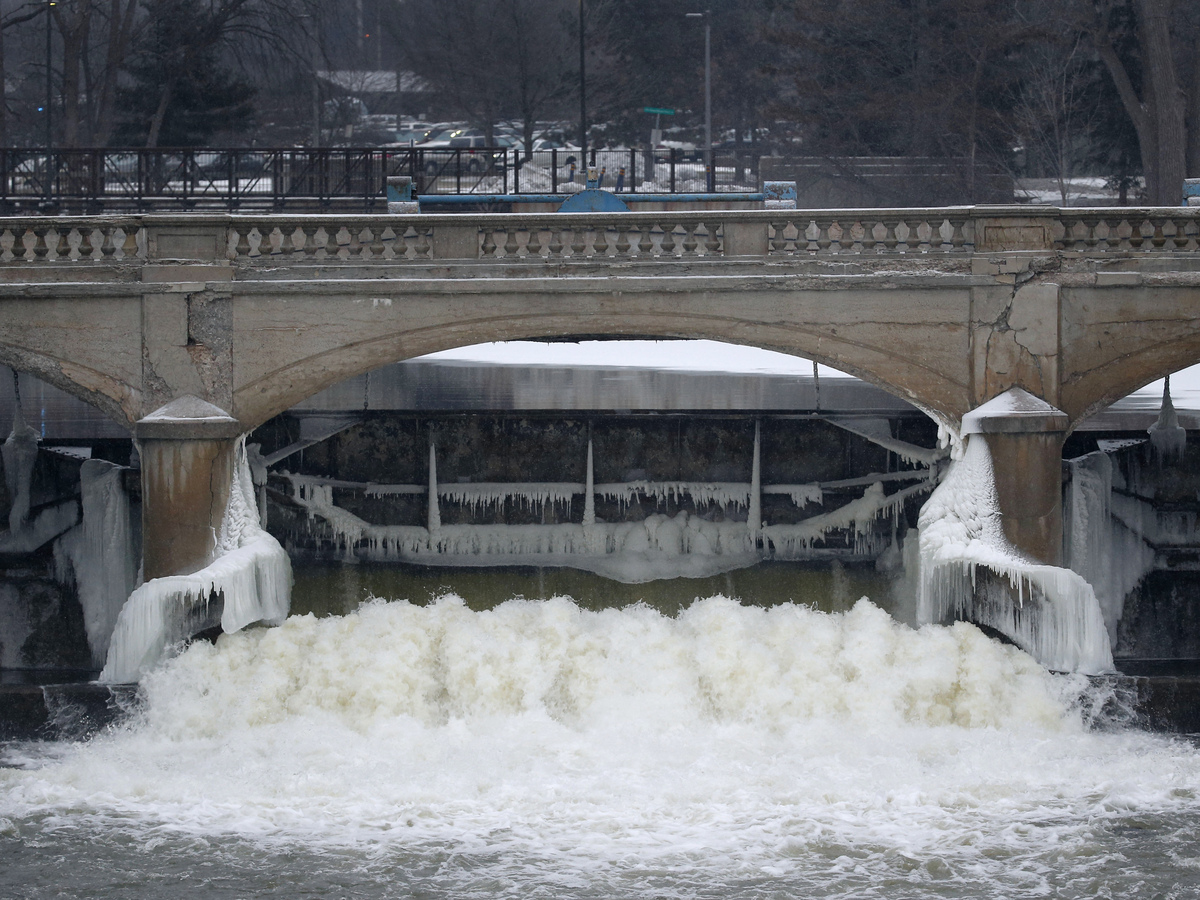 Water from the Flint River flows through the Hamilton Dam. In 2014, the city switched from Detroit's water system to the Flint River, setting the stage for a crisis that sickened residents and cost the mayor and other officials their jobs.

Five years ago, the drinking water source for Flint, Mich., was switched, setting the stage for the city's water crisis.

In the years since, residents of the aging industrial city have seen their children's blood lead levels spike, government officials grudgingly admit mistakes and perhaps seen Flint begin to recover.

It's still common to see claims on social media that Flint still doesn't have clean water. However, tests have shown Flint's tap water has improved greatly since the depths of the water crisis. Now, it's well within federal and state standards for lead, even better than many other cities.

The city's water problems all began with an optimistic toast.

"Here's to Flint," Mayor Dayne Walling said as he lifted a glass filled with tap water. Walling and other city and state officials were toasting the switch of the city's drinking water source from Detroit's water system to the Flint River.

The switch was intended to save money, but instead cost the mayor his job.

At first, Flint's nearly 100,000 residents complained their tap water was undrinkable: cloudy, foul smelling and tasting of chemicals or worse. The system also suffered E. coli outbreaks. Eventually, the city acknowledged it was in violation of the Safe Drinking Water Act.

But government officials persisted in defending the water as safe to drink.

After 18 months, government officials admitted the switch had been bungled. In October 2015, Flint was switched back to Detroit water.

It was only revealed after the city's drinking water was switched back that a Legionnaires' disease outbreak had killed at least a dozen people during the switch. There are conflicting scientific opinions as to whether the Flint River water was the source of the outbreak.

"We have to be where we are to move forward"

In the past few years, 15 city and state officials have been indicted for their actions related to the crisis. About half have cut plea deals. No one has gone to jail. And the remaining criminal cases are stalled as Michigan's new attorney general tries to decide how to proceed. Meanwhile, multiple civil lawsuits against state and federal agencies and private contractors are grinding their way through the courts.

Flint was left with thousands of damaged water pipes, families surviving on bottled water, and a battered self-image.

Later this year, the city hopes to inspect the last of nearly 30,000 pipes connecting homes to city water mains. Crews are replacing old lead and galvanized service lines with new copper pipes. But residents are still advised to use filters on their taps as the pipe replacements continue.

Federal and state funds are helping Flint fix its broken water system. And that in turn is attracting business investment.

Stylist Dan Buccilli and his husband, David Custer, opened a new hair salon in downtown Flint last month in a rehabbed print shop. Custer, who is also a local TV anchor, says Flint is better off now than it was before the water crisis.

"We joke ... that we have some of the best water in the country now," says Custer. "We have brand-new pipes around our entire city."

Linnette Phillips, the deputy director of small business and workforce development for the city, says this year Flint has about $200 million in new business investment coming in, from new auto parts manufacturing to a new culinary school.

"Of course, no one would ever want to experience this travesty that the city of Flint experienced," says Phillips. "But we have to be where we are to move forward from that."

But while businesses are moving forward, many city residents are having trouble.

Flint's unemployment rate remains high and median income is less than half the state average, with more than a third of city residents living below the poverty line. And it's not surprising to see long lines still forming outside churches during weekly bottled water giveaways.

Flint resident Melissa Mays has been one of the loudest voices during the water crisis. But even she can see some silver linings. "In some ways we're better," says Mays. "In other ways, we're forever poisoned, damaged, traumatized ... that's not gonna ever be better."

For example, it will be several years before studies will be able to show whether drinking Flint's lead-tainted tap water affected the cognitive and behavioral development of thousands of young children.

It is the future of those children that will determine whether Flint truly emerges stronger from its water crisis.