Accessibility links
'A Clockwork Orange' Follow-Up Surfaces After Decades Unseen Not long after the release of the film adaptation, Anthony Burgess embarked on an ambitious companion to his seminal novel. But it was never published, and the manuscript went unread — until now. 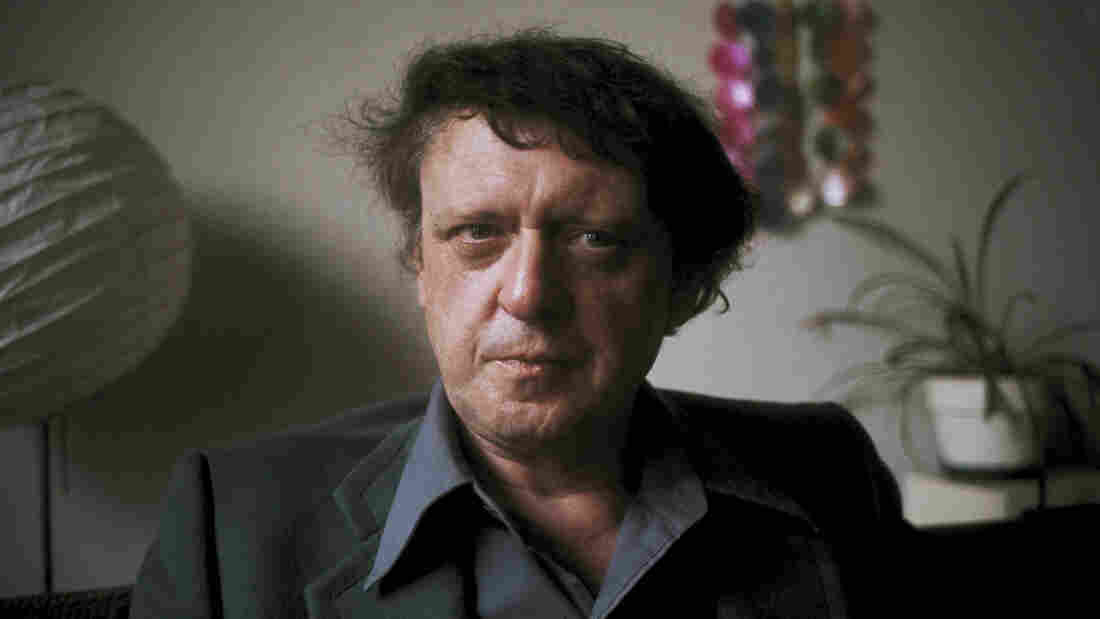 Anthony Burgess poses for a photograph in 1973, two years after the release of the film adaptation of A Clockwork Orange — and right around the time he was working on the recently unearthed manuscript. AP hide caption 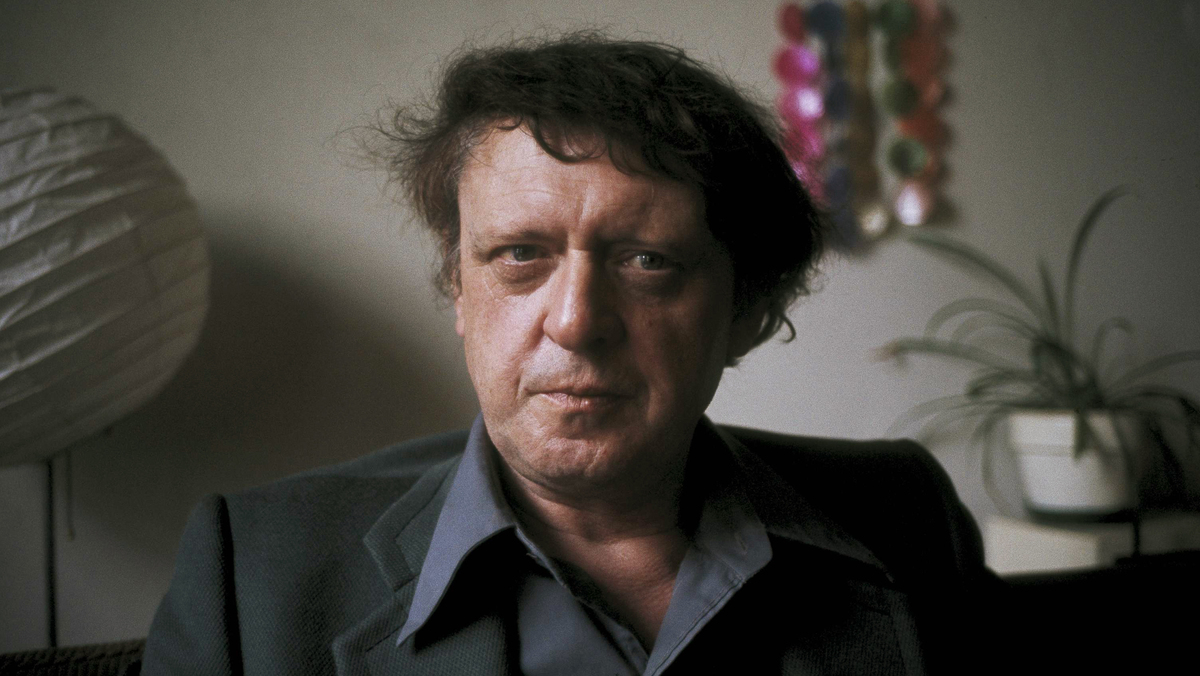 Anthony Burgess poses for a photograph in 1973, two years after the release of the film adaptation of A Clockwork Orange — and right around the time he was working on the recently unearthed manuscript.

Gather round, my droogs. It's time for a story.

Not long after the 1971 release of the film adaptation of A Clockwork Orange, the novel's author, Anthony Burgess, received an offer from a publisher: Write a short follow-up to the novel, one that uses the word "Clockwork" in the title and brims with artwork, and we will make you a rich man.

So, according to Burgess scholar Andrew Biswell, the novelist got to work on a brief piece, which soon became a big piece, which eventually ballooned to 200 pages. Written under the name The Clockwork Condition, the work was to be a philosophical meditation on the very nature of modern life. But alas, it never was — the manuscript was never published, and despite rumors of the project, it was never found either.

On Thursday, Manchester Metropolitan University, where Biswell teaches modern literature, announced that the professor had unearthed the long-lost manuscript. It was found in a snowdrift of the late novelist's materials, stacks of papers and about 1,000 hours of recordings at the Burgess Foundation in Manchester during the long process of cataloguing.

Biswell tells NPR he was "very surprised" when he came across it.

"I was delighted, because I'd come across a reference to The Clockwork Condition — just one reference — in an interview from around 1975, where Burgess was asked, 'Where is this book?' And he said, 'Oh God, that will never be published. That doesn't really exist,' " Biswell explains.

"And so that caused me to believe that the manuscript which we've now found was no more than an idea or a rumor — and in fact, the surviving manuscript is very developed, and there's a strong argumentative line to it," he continues. "It's possible, I think, to see what it might have been though he didn't complete it." 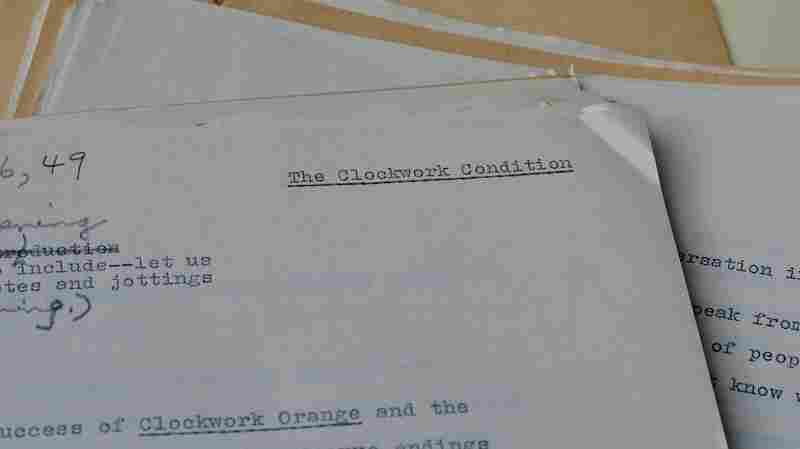 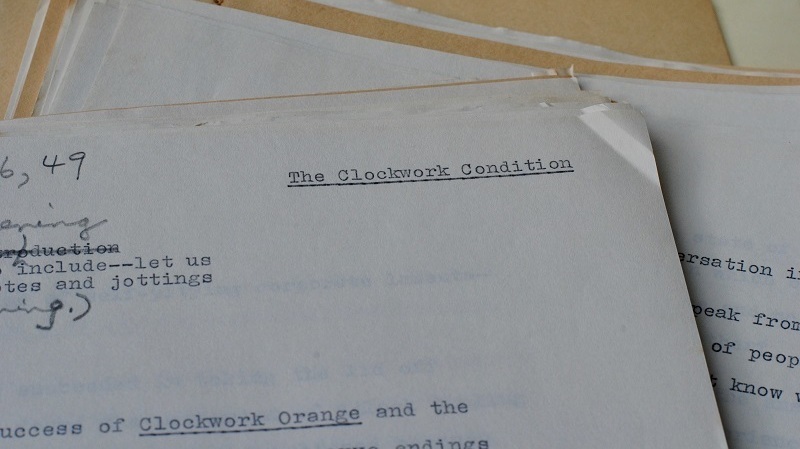 The manuscript of The Clockwork Condition, found by Andrew Biswell of Manchester Metropolitan University.

Don't think of the project as a straight-up sequel, exactly; Biswell says it's probably more accurately described as "a kind of nonfiction commentary on many of the issues which are raised by the Clockwork Orange novel."

"He was going to write a book about the condition of modern man. It would be structured around Dante's Inferno, which was one of his favorite poems," says Biswell, who cobbled together a portrait of the work not just from the manuscript itself but also from Burgess' correspondence around the time he was writing it. "Insofar as the book had a theme, it was — as they said in the proposal — the need for man to break out of the hell of existence and come to grips with his own deepest self."

So why did The Clockwork Condition never see the light of day?

In a word, Burgess got distracted. Biswell says the novelist saw a wealth of opportunities arise after the release of director Stanley Kubrick's film, including an ill-fated attempt by the two men to make a movie about Napoleon.

"I think he became so embroiled and immersed in these other literary projects that he ended up not writing this book about the human condition," Biswell says.

Still, Burgess had already agreed to write something under the name of "Clockwork." That project ultimately became The Clockwork Testament, a novella published in the mid-1970s that was partly inspired by his own experiences writing A Clockwork Orange and seeing it translated to the big screen.

But Biswell won't rule out the possibility that the unfinished manuscript could still be published.

"There's enough there in the way of the writing that's completed and the synopsis that you can understand what this book might have been," he says. "But I think it would need quite a lot of editing, and it would require the right designer to catch the mood of what's there."

In the meantime, Manchester Metropolitan University has released a couple of excerpts from the work. Here's one, my droogs of today – read it and weep:

"Goodness is a matter of common sense, something required by the community, but truth and beauty remain values — totally useless and the only totally human things we're capable of pursuing. This is the great age of communications, but what the hell are we trying to communicate about? Certainly not reality. The pleasures and diversions of the flesh are delightful, and, if God had anything to do with them, I'd thank God for them. The organization of societies is fascinating. Sport is thrilling. But none of these has anything to do with reality. What man must recognize as a human duty is the pursuit of what, behind the mess of phenomenon and delusion and multiplicity, really and ultimately exists — the final monad, the intellectual intimation that there is a God, the bare and bony idea with no nonsense about benevolence and justice. And, through the pursuit of beauty, he may gain not an intimation that God exists (which is for the scientific or philosophical intellect), but an indirect experience of the quiddity or whatness of God. This is what education should prepare us for. Unfortunately it doesn't. And the television programmes and the films and the Daily Mirror are in the service of unreality, the hiding of the nature of the human duty and the doling out of anodynes as a substitute. If I wanted to use the term 'evil', I'd say that that kind of smothering is evil. If you want Christian language, I'd almost say that to discourage the seeking after reality is to commit the sin against the Holy Ghost."