Accessibility links
Comic Brian Regan, A Favorite Among Families And Other Comedians Alike He's a favorite of other comics — a physical, observational and airtight performer who works "clean." All that helps explain why families make up a good portion of his massive audience. 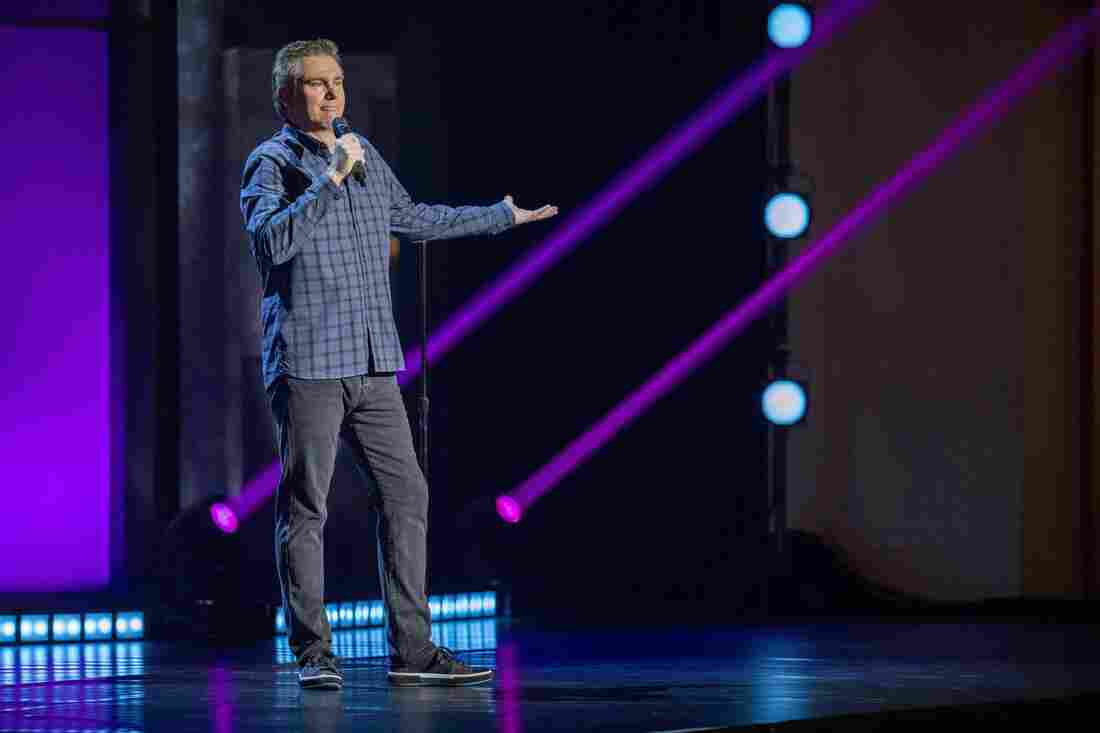 The comedian Brian Regan, pictured here in his Netflix special Nunchucks and Flamethrowers, has earned a reputation as a comic's comic. Jeffery Garland/Netflix hide caption 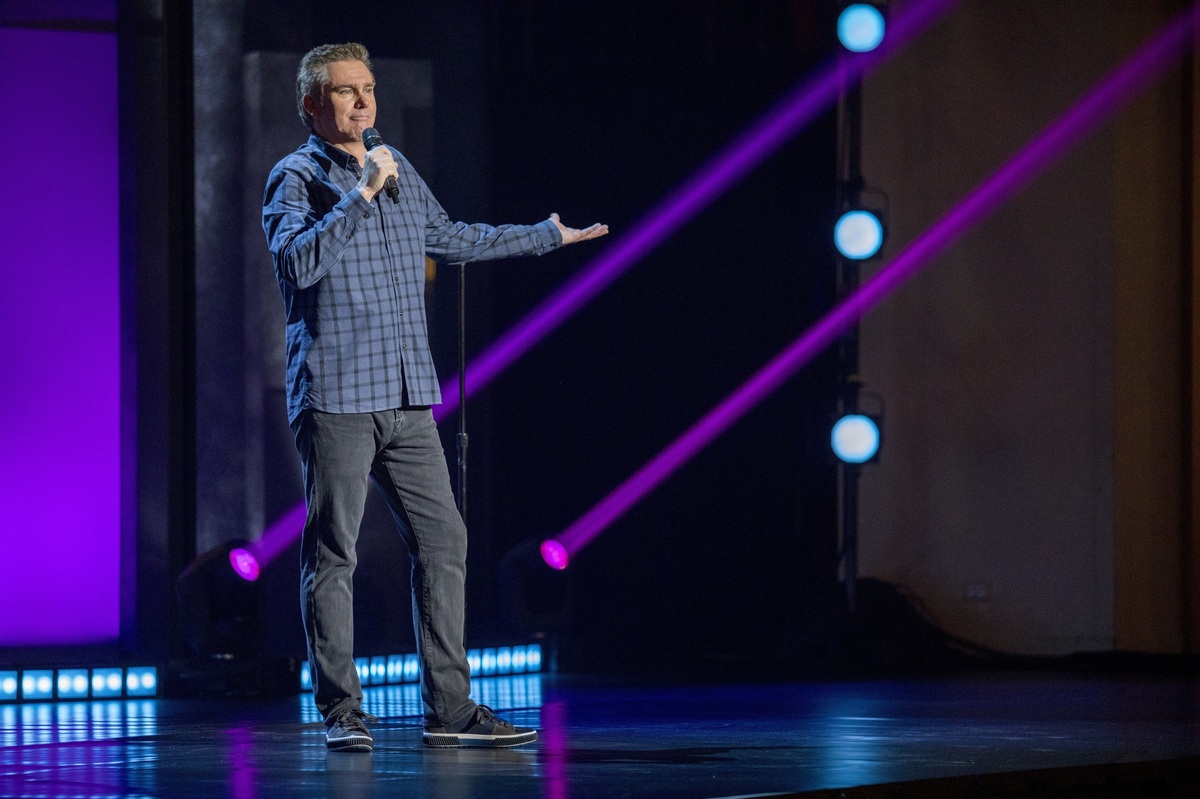 The comedian Brian Regan, pictured here in his Netflix special Nunchucks and Flamethrowers, has earned a reputation as a comic's comic.

Entertainment Weekly once called Brian Regan "your favorite comedian's favorite comedian." Chris Rock has been quoted saying: "No comedian in the world says, 'Yeah, I want to follow Brian Regan.'" Bill Burr said on his podcast: "Brian basically goes out and, for 90 straight minutes, it sounds like a jet is landing, how hard this guy kills."

Regan has been "killing" on the road pretty much nonstop since the 1980s. And he also keeps his act clean — free of profanity or explicit jokes.

If he were a rock star, one of his hits might be called "Dora The Explorer." "First of all, do the producers think that rhymes?" Regan asks earnestly in one of his stand-up specials. "Maybe that rhymes in the Kennedy household: 'Put on Dora the Explor-ah.'"

Another hit would be "Sports on TV," a riff on sports interview clichés: "Then I get to hear my favorite sports reporter question: 'Would you consider this a must-win game?' And they always feel they have to say yes. 'Yeah, we wanna win it. It's very important [to] have momentum and, you know, we have our uniforms on anyway. Might as well try.'"

With an almost cartoonish, Chaplinesque flair, Regan puts his entire body into his act, furrowing his eyebrows when he's confused, shuffling his feet when he feels dejected, awkwardly swiveling his hips to demonstrate how poorly he dances.

Since Regan performs his silly, physical, observational humor free of curse words, families flock to his shows. At a recent run at the Kennedy Center for the Performing Arts in Washington, D.C., 15-year-old Alissa Timko was there with her parents. She says one of her favorite Regan bits is about him being "Stupid in School."

"He describes how he fails at spelling and the science project," Timko says. "Oh, my God, that was funny."

Regan's science-fair rejection story debuted on his first album, Brian Regan Live in 1997. It's a bit so popular that fans have created short films to go with it (like this one, or this one).

Brian Regan says comedians notice things other people don't always see. He compares it to those 3D stereograms in which there's a hidden image within an image — like a dinosaur.

Regan grew up in suburban Miami with his parents and seven siblings. ("All my brothers and sisters are funny," he insists; his brother Dennis Regan is also a comedian.) It was his college football coach, at Heidelberg University in Ohio, who encouraged him to try theater, which eventually lead him to stand-up.

"I dropped out of college to do it," Regan says. "So imagine that phone call to mom and dad."

He says his parents didn't like the idea — but also didn't stop him. After auditioning for a spot at a comedy club in Fort Lauderdale, Fla., the manager told Regan he could perform as often as he wanted — but only after the headliners. For about two years Regan performed there every single night it was open.

"It was at the end of the show after the other comedians were done," he says. "The audience was walking out. It was not an easy atmosphere. But I figured: I'm going to learn something every time I get on stage."

After that self-imposed boot camp, he started touring small clubs around the country. Regan landed a spot on The Late Show with David Letterman on CBS in 1995. He was invited back 27 more times — more than any other stand-up comedian on that show.

In the early years, Regan's work ethic gained him something of a reputation among his peers. He was known to go on tour with enough jokes to fill two completely different shows, so audiences could come back twice in one weekend knowing they wouldn't hear the same bits again.

Comedian Ray Romano, who shares the same manager with Regan, admits to being a little bit envious.

"I'm like, 'How can he write that much material?' It's just incredible," Romano says.

Romano says Regan's output is even more impressive given that he doesn't curse or tell dirty jokes, known as "working blue."

"Not to take anything away from crafting comedy and being blue," Romano says. "I just think the degree of difficulty is much harder for Brian and I just give him more credit for it."

While Regan is thrilled his stand-up has a multigenerational appeal, he bristles a bit at the "clean comedian" label.

"Because I think when you see the word 'clean' associated with comedy, a lot of people think that that's the point of it," Regan says. "Like, 'Oh he's trying to be wholesome. He's trying to make a statement.' And that's not it at all. There are comedians out there who work dirty who I think are great."

Regan says that when he first started doing stand-up, he had a few four-letter words in his act.

At this point, the real Brian Regan is so popular, he doesn't do clubs anymore. Instead, he fills civic centers and arenas around the country. And if you can't catch him there, he's on Netflix with a stand-up special (Nunchucks and Flamethrowers) and a new sketch series (Stand Up and Away!).