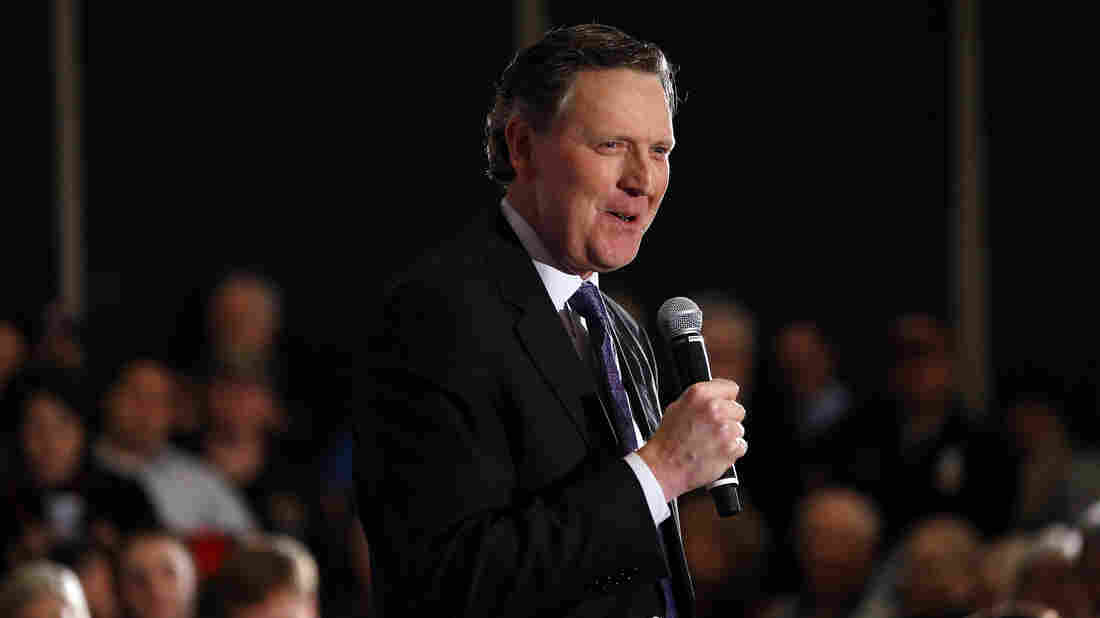 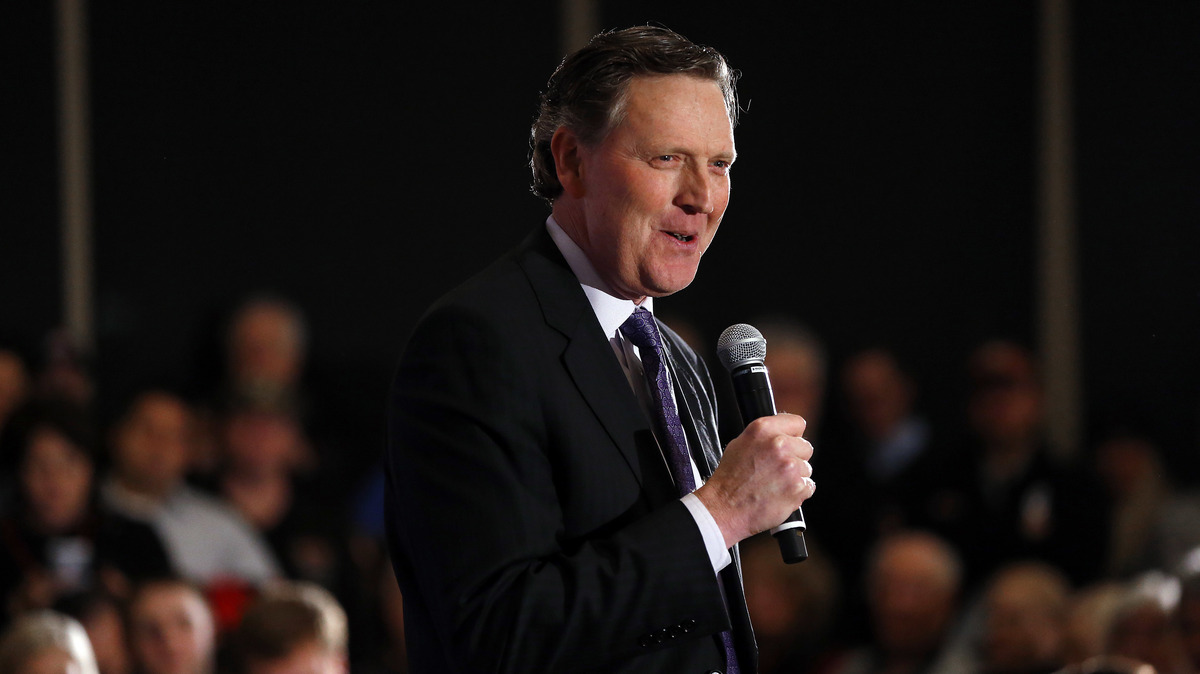 Bob Vander Plaats, an Iowa conservative evangelical who heads a group called The Family Leader, has invited seven top Democratic presidential candidates to a July forum that is a typical stop for Republican candidates.

As Democratic presidential hopefuls work to position themselves as the candidate to unify the country and win over supporters of President Trump, an influential Iowa evangelical leader is inviting them to a forum on religion and politics traditionally reserved for Republicans ahead of Iowa's first-in-the-nation caucuses.

"A lot of them are using faith as kind of a focal point, as a centerpiece," Vander Plaats said. "So we'd like to find out what makes them tick."

How Would Jesus Vote?

A spokesman for Buttigieg, who was criticized by a prominent conservative Christian leader this week for being gay, said he would consider attending.

In a statement to NPR, a spokesman for O'Rourke said the former congressman would not accept the invitation. "Vander Plaats and the Family Leader have unapologetically provided a forum for dangerous anti-LGBTQ hate speech on numerous occasions," Chris Evans said. "They are the antithesis of the unifying, inclusive, welcoming atmosphere that our campaign prides itself on in Iowa and across the country. We will not be participating in this forum."

The event has loomed large in past Republican caucus campaigns, drawing about 3,000 voters in 2015, when then-candidate Donald Trump famously criticized the late Republican Sen. John McCain's military service at the event.

It's the first time The Family Leader has invited candidates actively seeking the Democratic presidential nomination to the event, a spokesman said. Vander Plaats acknowledged that the group – known for fighting same-sex marriage – is "an unlikely venue" for Democrats, but added, "If you're going to cast a vision of unity, I think you need to be able to have the courage then to go to that venue ... and cast that vision."

Vander Plaats noted that in recent weeks, several candidates have woven their personal faith into their pitches to voters. Warren has made the case that her Christian faith helped shape her liberal political values. Harris opened her campaign by calling for "unity" and speaking of her "faith in God" during her announcement speech in January.

Buttigieg has spoken openly about his Episcopal faith, his sexuality and his marriage to his husband Chasten — and has sparred with conservatives including Vice President Pence.

The Democratic Field Is Set: 8 Questions About What Comes Next

This week, Franklin Graham, son of the late Rev. Billy Graham, questioned Buttigieg's claim to Christianity in a series of tweets, saying in part, "As a Christian I believe the Bible which defines homosexuality as sin, something to be repentant of, not something to be flaunted, praised or politicized."

Large majorities of Christians in the U.S. support same-sex marriage, though a majority of white evangelicals oppose it, according to a 2018 survey by PRRI.

Vander Plaats is a controversial figure, who has been regarded as a kingmaker among white evangelicals in Iowa, where the conservative Christian vote is a vital voting bloc for Republicans. During the 2012 presidential election cycle, Vander Plaats sparked criticism — including from within the Republican Party — for asking candidates for the GOP nomination to sign a "marriage vow" promising fidelity to one's spouse, "rejection of Sharia Islam" and support for "robust childbearing and reproduction," among other things.

Mayor Buttigieg says he’s a gay Christian. As a Christian I believe the Bible which defines homosexuality as sin, something to be repentant of, not something to be flaunted, praised or politicized. The Bible says marriage is between a man & a woman—not two men, not two women. 2/3

After widespread condemnation, The Family Leader issued an apology and removed language stating that slavery "had a disastrous impact on African-American families, yet sadly a child born into slavery in 1860 was more likely to be raised by his mother and father in a two-parent household than was an African-American baby born after the election of the USA's first African-American President."

VanderPlaats also has been, at times, a critic of Trump's character and rhetoric — though he has largely supported Trump's policies on issues like restricting abortion.

Daniel Hoffman-Zinnel, executive director of One Iowa, an LGBTQ rights group, expressed mixed feelings about the invitation to Democratic candidates.

"I would be a little surprised if any of them really took him up on this offer to engage in this conversation," Hoffman-Zinnel said.

But he added that if a candidate like Buttigieg were to accept, it could open a door to important conversations.

"It potentially could show the audience of The Family Leader a visible, positive representation of an out gay man who's running for the highest office in our land," he said. "So maybe it could potentially change people's hearts and minds — or at least get them to think more broadly."

Hoffman-Zinnel added that if candidates accept the offer, Vander Plaats has "a responsibility to create a very safe environment where folks feel comfortable being there."

After those protests, The Family Leader said in a tweet, "Shouting protests, namecalling are NOT how Christians are called to engage with our culture."

Vander Plaats said that it "would not be our intent" for candidates to face a hostile audience and that he hopes to "model civil conversation, even in areas where we have deep disagreements."

"You get points just for showing up," Vander Plaats said. "And so I think our audience would embrace them."

Jenna Ellis, an evangelical attorney and adviser to Trump's 2020 campaign, said she would like to see Democrats engage in a public conversation about faith. But she doesn't think many conservative white evangelicals would be won over.

Despite the opposition Democrats may face in such a crowd, Christopher Hale, a faith adviser to President Barack Obama's 2012 campaign, said he hopes they will reach out to religious voters in "surprising places."

Hale noted that more than 80% of white evangelicals supported Trump in 2016 — and evangelicals make up a significant share of voters in many key Midwestern states.

"I don't know a pathway forward for a Democratic candidate to win back the states we lost in 2016 without winning a higher percentage of the evangelical vote," Hale said.

Hale believes the Democratic Party has largely failed to speak the language of religious voters but says some of the 2020 candidates are making overtures.

"Democratic candidates oftentimes talk about Jefferson, and Madison, and founding ideals – but we need candidates that can talk about Matthew, Mark, Luke, and John," Hale said, referring to the first four books of the Christian New Testament. "A Democrat's not going to win a majority of the evangelical vote, but you can't win 10 or 15% and expect to win this election."