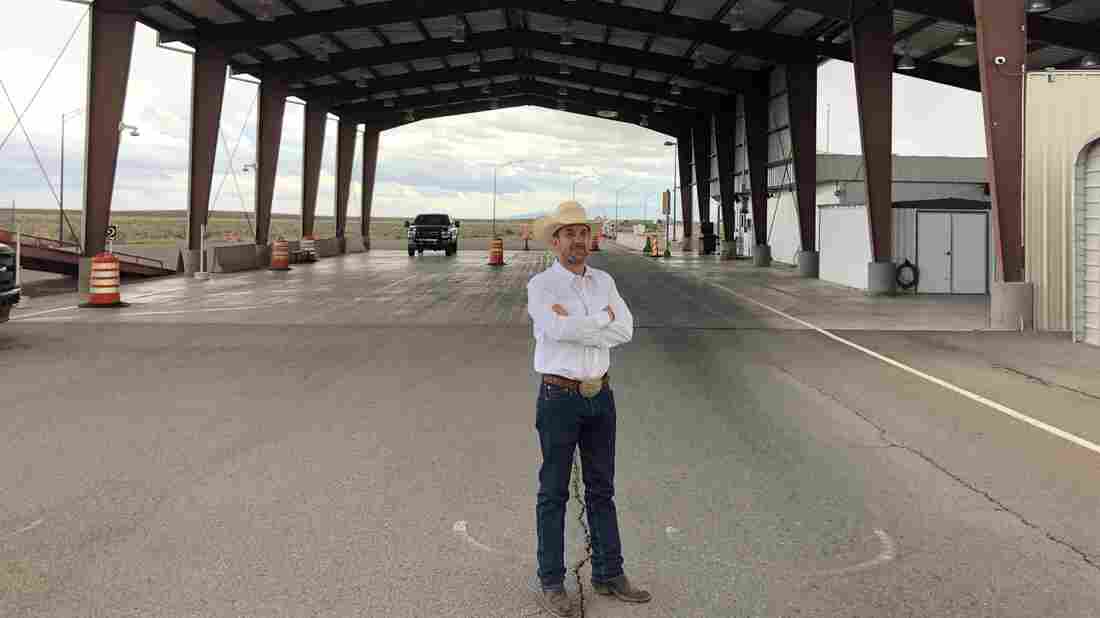 Couy Griffin, chairman of the Otero County Board of Commissioners, stands at the Border Patrol's abandoned U.S. Route 70 checkpoint in New Mexico. The Border Patrol checkpoints have been shutdown in the El Paso Sector as agents have been diverted to deal with an influx of immigrants. John Burnett/NPR hide caption 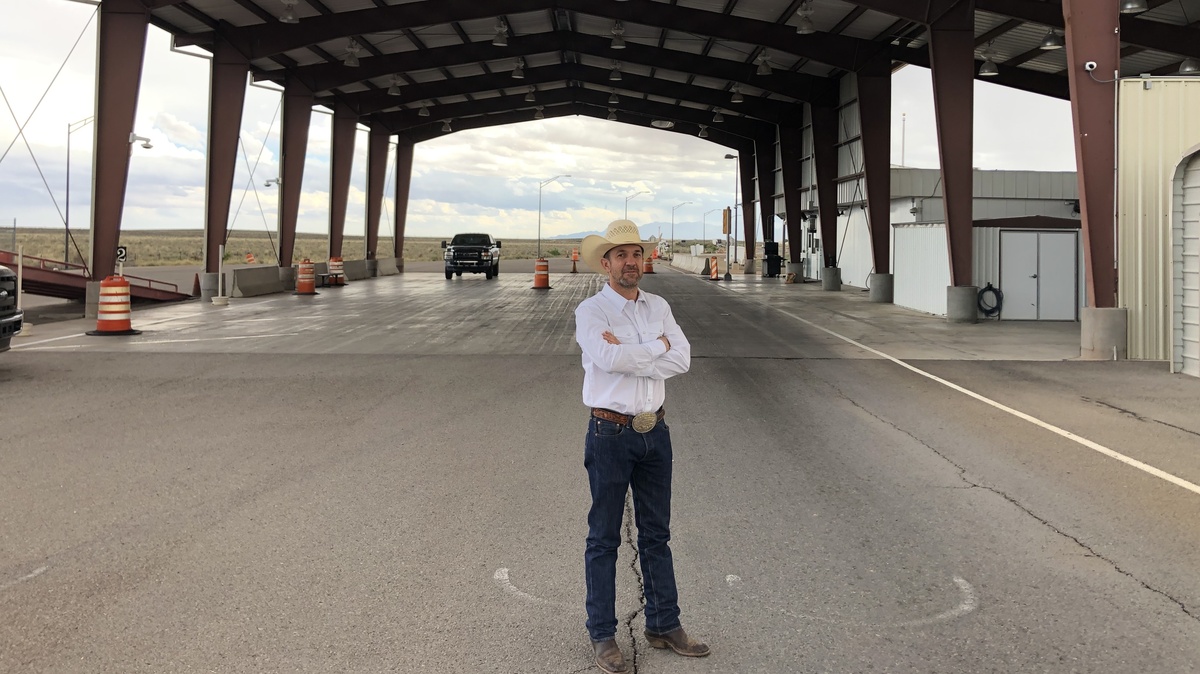 For people familiar with the lonesome highways of far West Texas and New Mexico, it's an unusual sight: The ubiquitous Border Patrol checkpoints are all closed. Last month, Homeland Security shifted the checkpoint agents to the border to help process the crush of migrant asylum-seekers.

Otero County, N.M., is so alarmed by the possibility of illegal narcotics flowing north unchecked that it has declared a local state of emergency.

Normally, if you drive from Las Cruces to Alamogordo, N.M., on U.S. Route 70, you have to pull into a federal inspection station. A stern, green-suited agent asks whether you're a U.S. citizen, while another one with a dog sniffs your car for drugs.

Nowadays, traffic roars past orange cones that block the entrance to the checkpoint. Customs and Border Protection has closed all six checkpoints in the El Paso Sector, which covers West Texas and New Mexico. Checkpoints elsewhere along the Southern border are operating normally.

That riles Couy Griffin. He wears a wide-brimmed cowboy hat and owns a nearby barbecue cafe whose trademark is a giant replica of a six-gun. "Where we're at right now ... this Border Patrol checkpoint is closed down. It's in place to provide security. And now it's left abandoned," Griffin says, standing in the empty lanes of the inspection pavilion.

Griffin, chairman of the Otero County Board of Commissioners, was the force behind the surprise move last week when the county declared a state of emergency over the shuttered checkpoint.

"What I'm really hoping comes out of [this emergency declaration] is that our governor will recommission the National Guard which she pulled off of the border earlier this year," he says.

Since then, the El Paso Sector has been overwhelmed by illegal crossers. They're apprehending 600 migrants a day — a 1,600% increase over the same time period last year.

So the Otero commissioners — all Trump supporters — asked the Democratic governor to redeploy National Guard to the checkpoints to stand in for overtaxed border officers.

The governor says if Otero County wants the checkpoints restaffed, they should write a letter to CBP, not the governor's office.

"They haven't given me any information about a state or county emergency except that they're mad the checkpoint is closed," she says in a phone interview from Santa Fe. "The National Guard cannot do immigration work. So they can't man that checkpoint. They can't make arrests. It doesn't make any sense."

There's no dispute that the Border Patrol's 71 traffic checkpoints all along the Southwest border seize lots of dope. Since Oct. 1, checkpoint agents have discovered 7 tons of marijuana and nearly a ton and a half of meth inside vehicles, according to CBP's own statistics.

Otero County Sheriff David Black is convinced the loss of the checkpoint on U.S. Route 54, south of Alamogordo has been a boon to smugglers. "What we're seeing here now is a huge influx in drugs. I mean, the highway's wide open. There's no checkpoints. Nothing," he says.

Before the checkpoints were closed, Black was sending his narcotics investigators out there two to three times a week to make drug arrests. He says informants are now telling him that Mexican traffickers know if they can get their product across the Rio Grande — the border with Mexico — they have a free ride north. He says his deputies are doing more highway interdictions to search vehicles, but they can't compensate for the loss of the federal inspection station.

"This is my hometown," Black says, "Born and raised right here in Otero County. I got grandkids in the schools. And this stuff is just piling into our community right now."

Otero County officials are not the only ones complaining. CBP has reassigned 750 agents from ports of entry to help process the wave of asylum applicants. U.S. and Mexican trade interests up and down the border are griping that border crossings are so understaffed that the wait for commercial traffic is now counted in hours, not minutes.

In a statement, CBP writes, "This is a temporary measure. Checkpoints are integral to the Border Patrol's security mission."

No date was given for their reopening.