Accessibility links
Colorado Highway Crash: At Least 4 People Killed In Fiery 28-Vehicle Pileup The Denver-area crash involved at least 24 cars and four semitrucks. One of the trucks was carrying a flatbed full of lumber — which contributed to a large fire on the roadway. 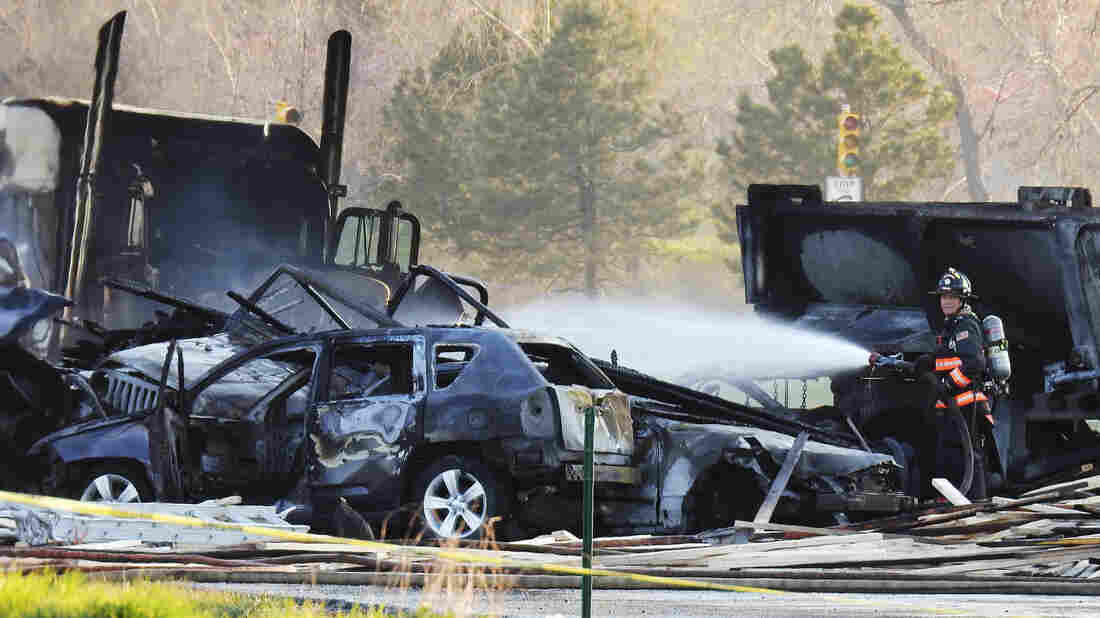 A chain-reaction crash on I-70 near Denver killed four people and shut down the highway near Colorado Mills Parkway in both directions Thursday. Hyoung Chang/MediaNews Group/The Denver Post via Getty Images hide caption 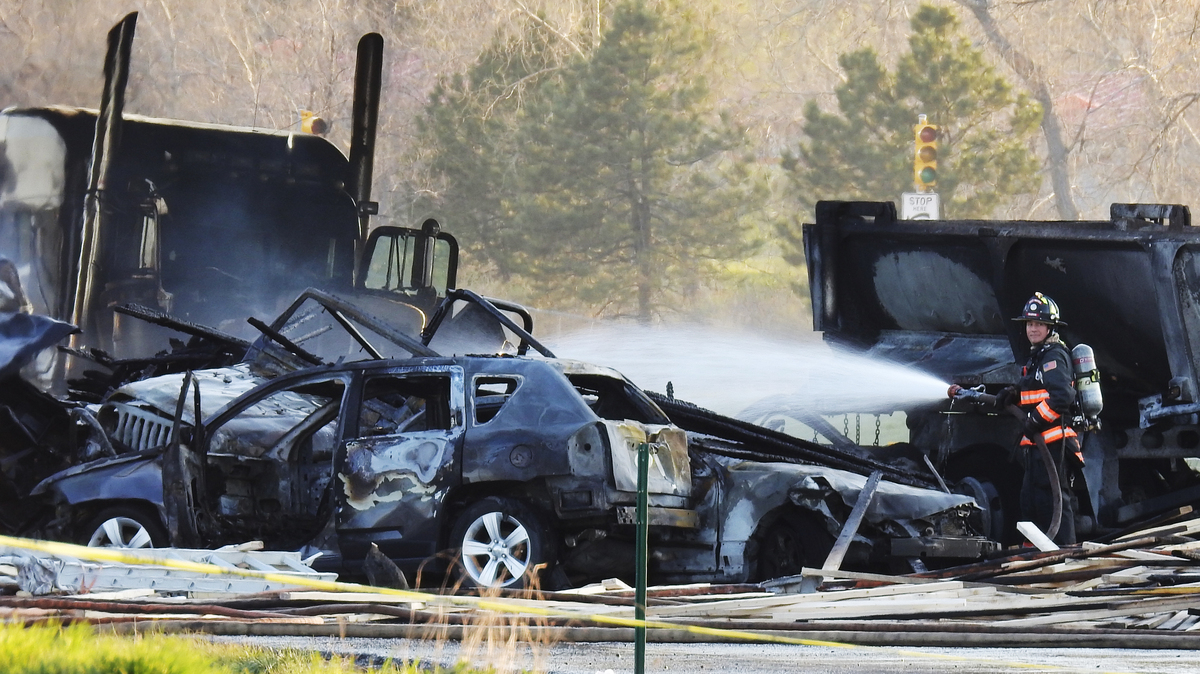 A chain-reaction crash on I-70 near Denver killed four people and shut down the highway near Colorado Mills Parkway in both directions Thursday.

A highway crash killed at least four people and started a large fire on Interstate 70 along the western edge of Denver on Thursday, in a disaster that police say was triggered by a semitruck that slammed into a group of cars that were stopped in traffic.

Police named the semi's driver as Rogel Lazaro Aguilera-Mederos, 23, a Texas resident who either couldn't or wouldn't stop his truck — ramming it into several cars that were backed up due to another crash farther down the highway, according to Ty Countryman of the Lakewood Police Department.

Aguilera-Mederos survived the catastrophic crash with minor injuries and is now in police custody. He is being charged with four counts of vehicular homicide.

Police and the coroner are still working to identify those who were killed. As of late Friday morning, workers were still trying to remove cars and clean debris from the road. 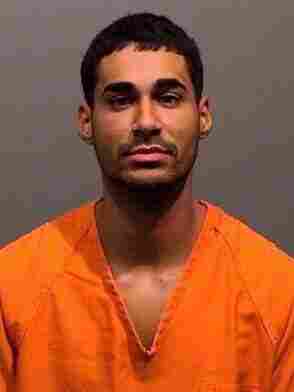 Police have arrested Rogel Lazaro Aguilera-Mederos, saying he was driving a truck that sped into cars that were backed up on the interstate. The crash sparked a large fire. Lakewood Police Department hide caption

The crash took place around 4:50 p.m. local time and involved at least 24 cars and four semis, Countryman said, in an update on the crash Friday morning.

Witnesses reported a chain reaction of collisions, followed immediately by a large fire. The truck that police say started the crash was carrying a flatbed trailer full of lumber. Two-by-fours were strewn across the road like matchsticks. Diesel fuel also spilled on the roadway, fire officials said.

The intense fire melted aluminum and burned as hot as 2,500 degrees Fahrenheit, said Josh Laipply, chief engineer at the Colorado Department of Transportation.

Six people were taken to the hospital, including the driver of the semi, Countryman said.

We're over a large vehicle fire on I-70 at Colorado Mills Parkway. We're working to get more information. https://t.co/ulVSXN86Dr

Parts of I-70 remained closed Friday and likely will stay that way until Saturday morning, officials said. The closure caused long morning commute delays, with investigators still combing the area and workers trying to clean up debris in the eastbound lanes where the crash took place. Westbound lanes also were closed, with motorists using a detour to avoid a bridge where the greatest damage occurred.

Police are still assessing the scene, trying to identify the dead and account for everyone who was involved. It wasn't until late Thursday night that police investigators could gain access to the worst area of the crash.

Transportation officials also are evaluating the damage to the bridge caused by the intense heat of the fire.

Another look at the devastation and the burned out vehicles on EB 70 at Denver West. pic.twitter.com/YaAFsPZvQC

One firefighter was injured while responding to the accident, "hit by debris when potentially a tire exploded," the West Metro Fire department said.

Images from the scene showed a blooming cloud of black smoke hanging over the road. In the struggle to get water to the crash site and combat the flames, a group of nearby residents helped firefighters carry a long fire hose to a hydrant in an apartment complex.

Soon after the crash, a video circulated online showing what witnesses said was the semi in question, barreling down the highway at speeds as high as 80 mph, just before the crash.

That video was filmed by Joshua McCutchen — who was taping a segment for his YouTube channel during the slowdown, when the truck sped past. McCutchen also spoke to a local man who said he rushed to help those in the crash after seeing it unfold.

Advisory: the video includes profanity and scenes (from a distance) of the crash's immediate aftermath.

In a news briefing near the scene last night, Countryman said police had seen those videos, adding, "If the driver's out of control, that's certainly a big concern that we have. The question is, why is he out of control?"

In an update Friday morning, Countryman said the police found probable cause to believe the driver was at fault. He added that there was no evidence that the driver was under the influence of drugs or alcohol.

Investigators are working to examine the mechanical condition of the driver's semi, Countryman said.