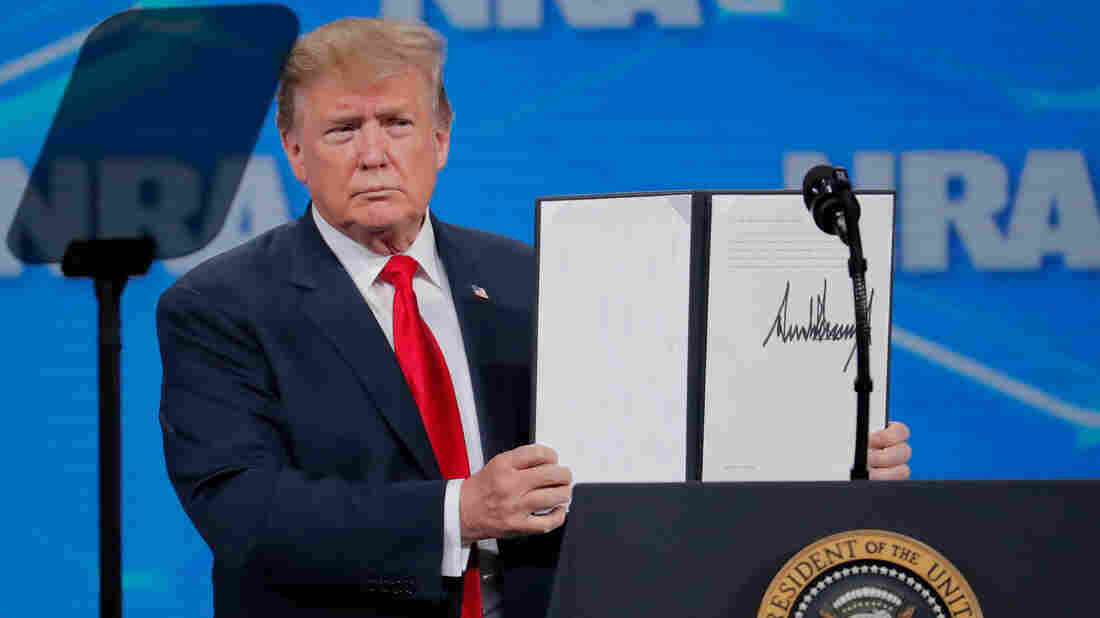 President Trump holds up an executive order he signed at an NRA event Friday, announcing that the United States will drop out of the Arms Trade Treaty that was signed during the Obama administration. Lucas Jackson/Reuters hide caption 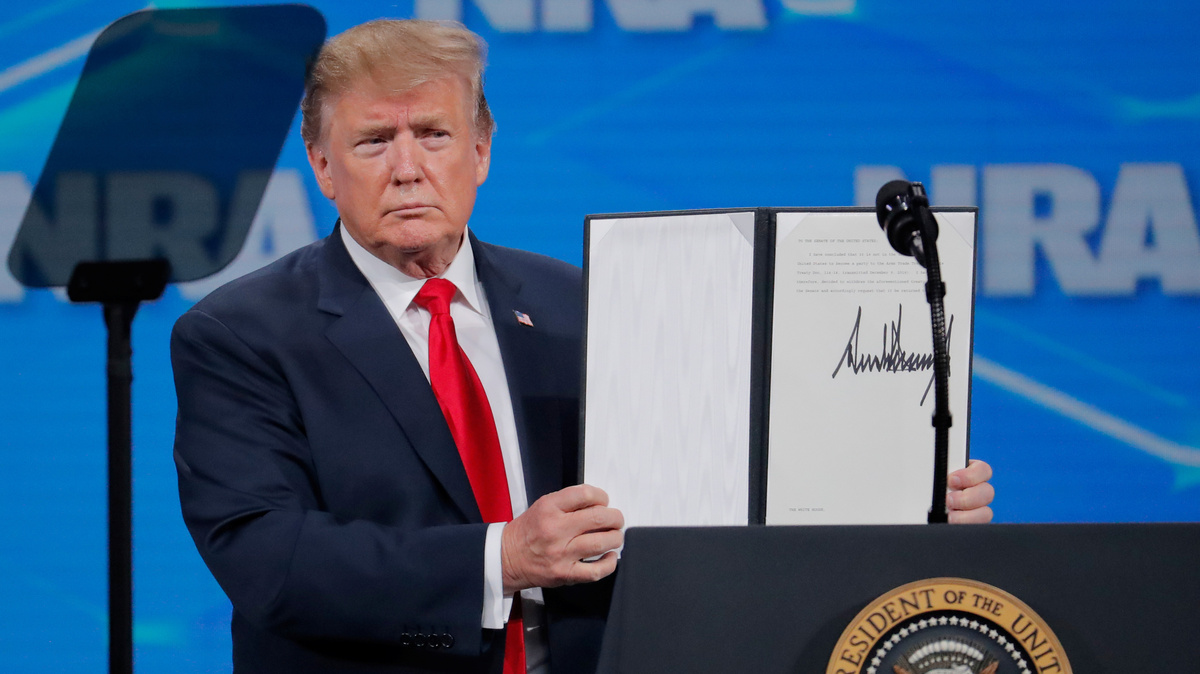 President Trump holds up an executive order he signed at an NRA event Friday, announcing that the United States will drop out of the Arms Trade Treaty that was signed during the Obama administration.

The treaty, known as the ATT, has been in effect since late 2014. The U.S. signed on to the agreement in 2013 but has not ratified the treaty.

The U.S. withdrawal had been expected. Trump made it official at the National Rifle Association's annual convention in Indianapolis, pulling out a pen onstage and signing a paper that he said would take back the Obama administration's signature on behalf of the U.S.

The ATT has long been a target of the NRA, which claimed it would harm U.S. gun owners. Trump echoed that criticism on Friday, calling the ATT a threat to Second Amendment rights. "We will never surrender America's sovereignty to an unelected, unaccountable, global bureaucracy," Trump was quoted as saying, in a White House statement announcing the change.

The White House says Trump will ask the Senate to return the amendment to the executive branch rather than consider it for ratification.

After Trump signed the order, he threw his pen into the crowd, NPR's Tim Mak reports.

Trump then throws the pen into the crowd https://t.co/aezs5eMqiu

"We're taking our signature back," Trump said, according to a tweet from Jim Geraghty of the National Review. "The United Nations will get notice that we are formally rejecting this treaty."

More than 100 countries have ratified or are abiding by the ATT. But on Friday, the White House asserted that the U.S. already has export controls that "have long been considered the gold standard for engaging in responsible arms trading."

"The ATT is simply not needed for the United States to engage in responsible arms trade," the White House statement reads. "America will continue to abide by United States laws that ensure our arms sales are implemented after careful legal and policy reviews."

The White House also said the ATT "will only constrain responsible countries while allowing the irresponsible arms trade to continue," noting that major arms exporters such as Russia and China are not part of the deal.

Trump's decision was quickly criticized by the Stimson Center, a nonprofit think tank in Washington. "Today the President once again walked away from America's leadership role in the world and undermined international efforts to reduce human suffering caused by irresponsible and illegal arms transfers," said Stimson Managing Director Rachel Stohl, an arms trade expert who helped draft the treaty.

The U.S. has been one of the biggest financial backers of the ATT, with the organization's latest financial figures showing that the U.S. overall contribution of $387,334 was only narrowly surpassed by Japan's $387,500.

A previous version of this story said more than 100 countries have ratified the Arms Trade Treaty. In fact, just under 100 have ratified it while several more abide by its provisions without formal ratification.