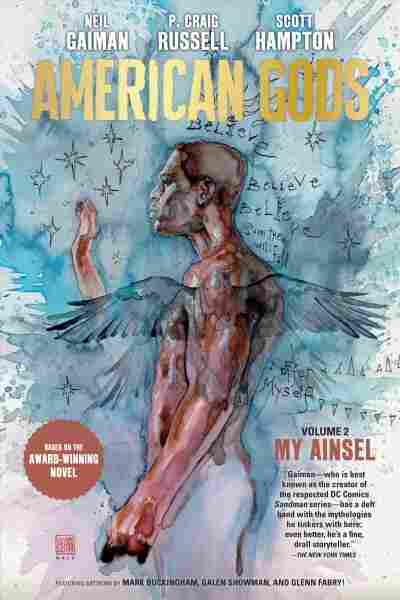 Scott Hampton has big work to do in My Ainsel, volume 2 of an ambitious, three-part graphic adaptation of Neil Gaiman's American Gods. Hampton's task duplicates the thorny one Gaiman set himself in the 2001 novel: To convince readers that figures out of myth and fable deserve deadly serious, unsentimental attention. American Gods shows these figures — Odin, Bast, Loki, even the personification of Easter – grappling with the failure of that attention. In the world Gaiman's drawn, as in our "real" one, the obliterating steamroller of modern technology has made the gods, demons and tricksters of ancient lore seem rickety and quaint. But as Gaiman shows, the truth is far otherwise.

The problem for the artist is how to depict Gaiman's characters without adding quaintness back in. It's a complicated one, starting with the fact that most of us only think of these icons as colorful tropes in the first place. In the novel, Gaiman gives his gods unexpected appearances and accoutrements. The protagonist, Shadow, only gradually figures out that a random drunk is actually a leprechaun and his rather ordinary-looking employer, Mr. Wednesday, is the god Odin.

But description is one thing; drawing, another. How do you draw a leprechaun's rainbow to look anything other than cheesy? Or give Odin gravitas without surrounding him with stereotypical Viking gear? It's a particularly tall order for a cartoonist, who's not just painting frozen portraits of these millennia-old figures, but trying to bring them to life. In both My Ainsel and its predecessor, Shadows, it's easy to see the difficulties encountered by the impressive roster of artists. Even the great P. Craig Russell, who did the script and layouts, gets a bit cute in a story in the first volume. Glenn Fabry and Adam Brown, who drew the chapters' title pages, and David Mack, who contributed additional "chapter design pages," sacrifice life and movement to create an "arty" aura. Their work is rich and compelling, but static.

Oh, and there's yet another challenge facing the artists of My Ainsel: Unlike in the first volume in the series, when Shadow accompanied Mr. Wednesday around the country to recruit gods for an approaching war, he spends a lot of this book hanging out in the suspiciously placid, snowbound town of Lakeside, Wisc. Here, besides having horrific nightmares and heading off wherever Wednesday wants him, Shadow gets to know the suspiciously friendly residents. There's Hinzelmann, who gives Shadow a ride home in his antique car, and Chief of Police Chad Mulligan, who helps him outfit himself in winter clothes and introduces him to everyone at Dave's Finest Foods. In the hands of the wrong artist, Lakeside could look a lot like Punxsutawney.

There's nothing cute going on here — not a bit. Hampton's gods, demons and tricksters hardly seem fantastical at all, and their war feels as grim as it should.

But Hampton's remote, chilly drawings slide past all these hurdles. He uses photos as the basis for his art, and paradoxically, it gives his people an unreal quality. Their bodies are stiff, and their faces all look like some of the details have been rubbed away with an eraser. It's a miserly style that does little to lure the reader in. But that miserliness is perfect for Gaiman's material. There's nothing cute going on here — not a bit. Hampton's gods, demons and tricksters hardly seem fantastical at all, and their war feels as grim as it should.

Amidst the thin atmosphere of Hampton's pages — an atmosphere further enervated by Jennifer T. Lange's icy colors — the interludes penned by other artists seem to blare luridly. They feel like all-too-forceful reminders that this is, after all, a fantasy story. It's a shame that Galen Showman and Lovern Kindzierski's "Coming to America: 1778" should be plunked down in the midst of Hampton's world. The short story is harrowing and masterfully drawn; it deserves to be a book in its own right.

But the world Hampton draws is truly the world of Gaiman's novel: One where the air is choked by modernity, where mystery and wonder almost fade away in a miasma of progress. This series doesn't feel beautiful or even particularly satisfying, but it does feel necessary, inevitable — real.