Accessibility links
New York Archdiocese Names 120 Clergy 'Credibly Accused' Of Child Sex Abuse The disclosure from one of the largest archdioceses in the U.S. follows similar revelations that further exposed the depth of a decades-long abuse crisis in Catholic communities across the nation. 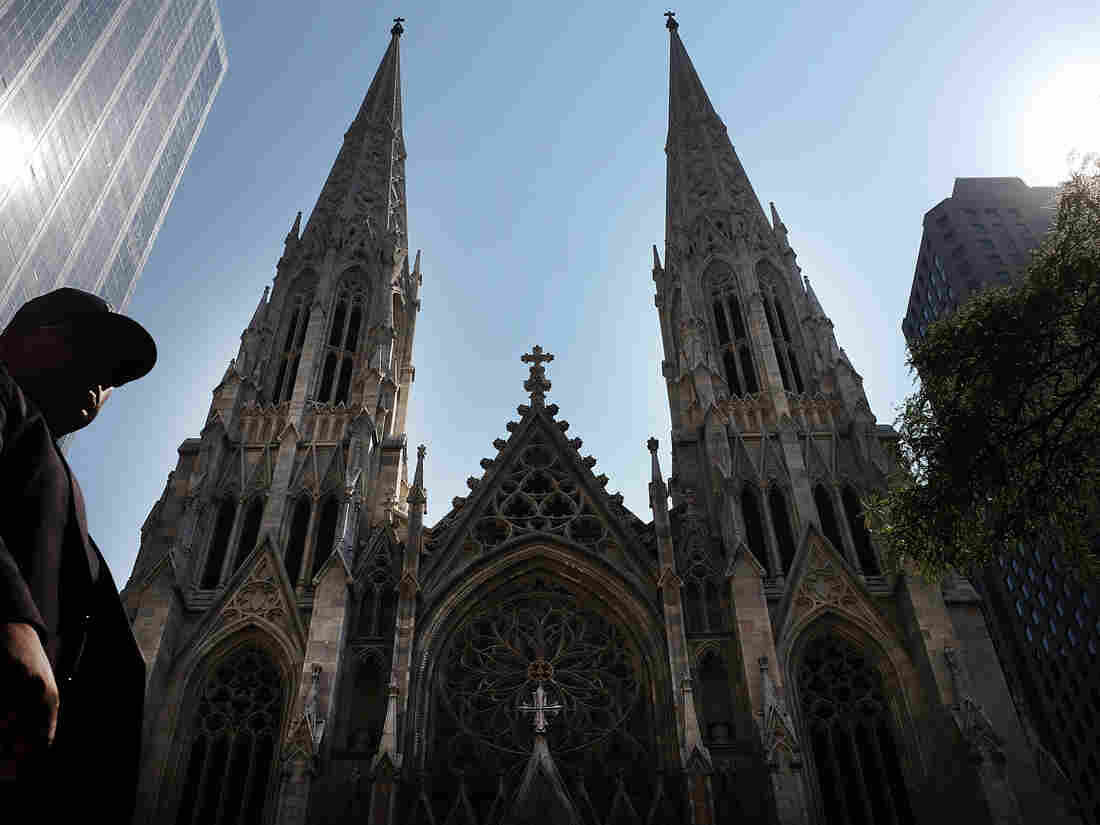 St. Patrick's Cathedral is the seat of the Roman Catholic Archdiocese of New York, which has released a list of 120 clergy members "credibly accused" of child sexual abuse. Spencer Platt/Getty Images hide caption 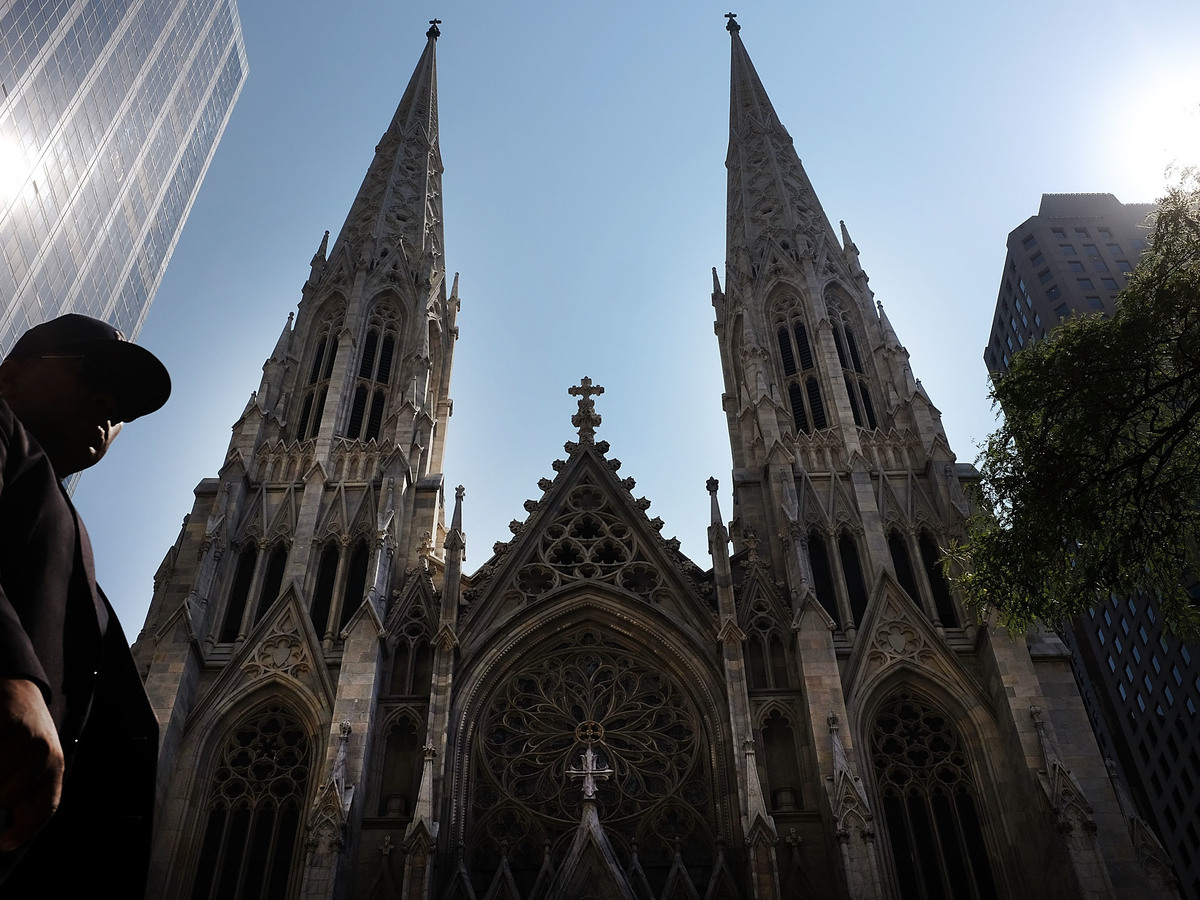 St. Patrick's Cathedral is the seat of the Roman Catholic Archdiocese of New York, which has released a list of 120 clergy members "credibly accused" of child sexual abuse.

The Roman Catholic Archdiocese of New York released the names on Friday of 115 priests and five deacons who have been "credibly accused" of sexually abusing children.

In a letter to members and family of the archdiocese, New York's archbishop, Cardinal Timothy Dolan, asked forgiveness "for the failings of those clergy and bishops who should have provided for the safety of our young people but instead betrayed the trust placed in them by God and by the faithful."

After hearing from many of you, including many victim-survivors, I have decided to publish a comprehensive list of all archdiocesan clergy found credibly accused of sexual abuse of a minor, or any…[1/4]

The disclosure from one of the largest archdioceses in the nation follows similar revelations in recent months that further exposed the depth of a decades-long abuse crisis in Catholic communities across the United States. Last August, for example, a grand jury investigation revealed widespread sexual abuse by more than 300 priests in Pennsylvania. In February, Roman Catholic bishops in New Jersey and the Roman Catholic Diocese of Brooklyn also provided lists totaling nearly 300 clergy members who faced accusations of sexual assault.

The revelations have come as the Catholic Church continues to face criticism that it systematically covered up allegations of child sex abuse by clergy members.

Included in the release from the New York Archdiocese were the names of 53 priests and deacons who were credibly accused of abuse, admitted to abuse, were convicted of a crime related to abuse or were involved in a civil settlement. Most on the list were removed from ministry, deceased or both, the church said.

Names of 59 other clergy members were disclosed. Most had died or left the ministry before being accused in cases that led to financial settlements from the church's Independent Reconciliation and Compensation Program, according to the report.

Also included were the names of eight priests who have been defrocked and are still waiting for final canonical or archdiocesan disposition of allegations against them.

One of the most recognizable names included was Theodore McCarrick, the former cardinal and archbishop of Washington, D.C., who was expelled from the priesthood in February after he was found guilty by the Vatican of sexual abuse. McCarrick, who had previously served as a priest in the New York Archdiocese, is one of the highest-ranking Catholic officials to be defrocked as a result of the abuse crisis.

A graph provided by the archdiocese of New York shows most of the alleged abuse took place between the 1950s and the 1990s. The report states that since 2002, when the church overhauled its practices surrounding abuse claims, two cases have been determined to be credible. Both cases were handled by law enforcement and resulted in the priest being removed from ministry, according to the report.

"Please be assured there is not a single priest or deacon of the Archdiocese of New York against whom there has been a credible and substantiated claim of abuse against a minor currently in ministry," Dolan said in the letter.

The Survivors Network of those Abused by Priests or SNAP, a prominent support group for victims, said that while they are grateful for the list of names, it's "belated" and that the "information is good but not enough for a complete list"

"Cardinal Timothy Dolan should update his list to include, at a minimum, the work histories of each accused priest so that communities where abusers served know to look for survivors in their midst," according a statement from SNAP issued on Friday. "Similarly, he should include information about when the archdiocese first received the allegations and what they did in response."

SNAP says the only way to prevent similar situations in the future is to know what went wrong to enable abusers in the past.

"While we are grateful for the bit of transparency shown by the Archdiocese of New York today, we will be looking to the conclusion of the ongoing investigation by [New York] Attorney General Letitia James for the full transparency that the public deserves and needs."

SNAP said it hopes the publicizing of this type of information will "encourage survivors who may be suffering in silence to come forward and make a report to police and the attorney general" and better inform communities.

In his apology letter, Dolan also urged "anyone who has an allegation of abuse of a minor to go immediately to the district attorney to report it."

An earlier version of this story incorrectly said a grand jury report revealing widespread sex abuse by clergy across Pennsylvania came out in September. It was released in mid-August.