Accessibility links
Oliver North Says He Will Not Seek A 2nd Term As NRA President Attorney General Letitia James' announcement came shortly after the president of the gun rights group, Oliver North, said he would not seek a second term. 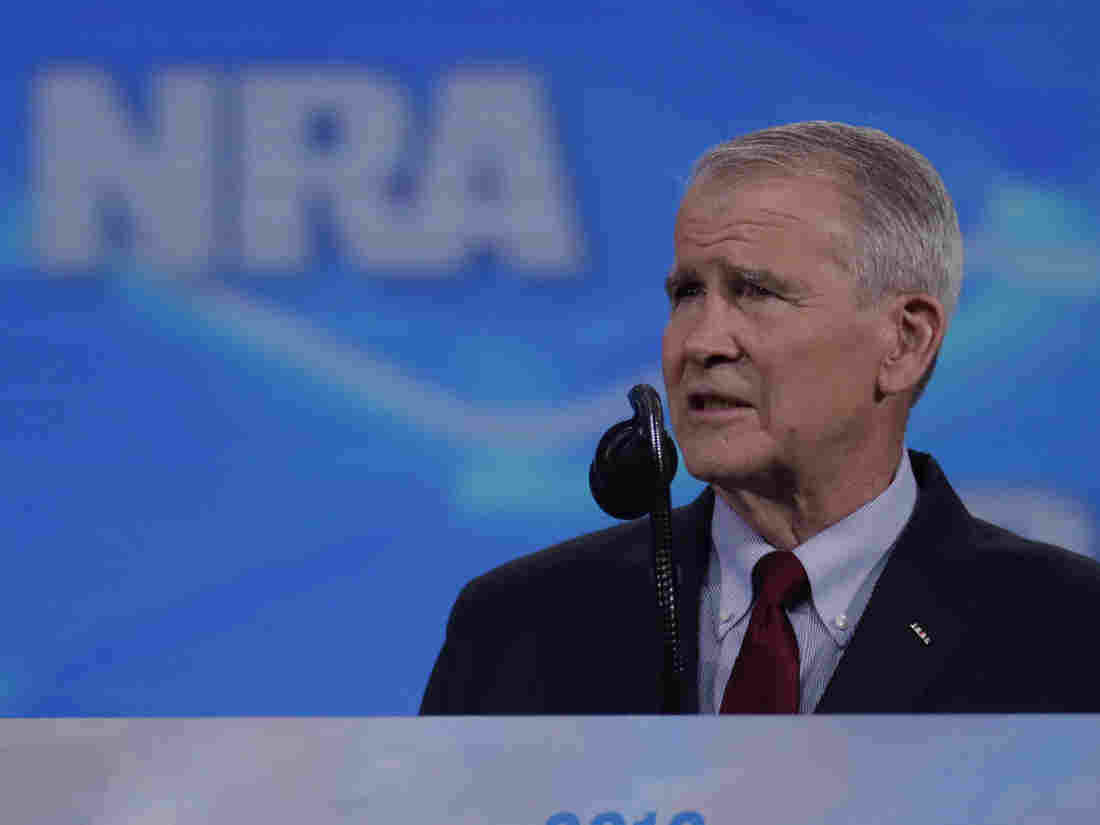 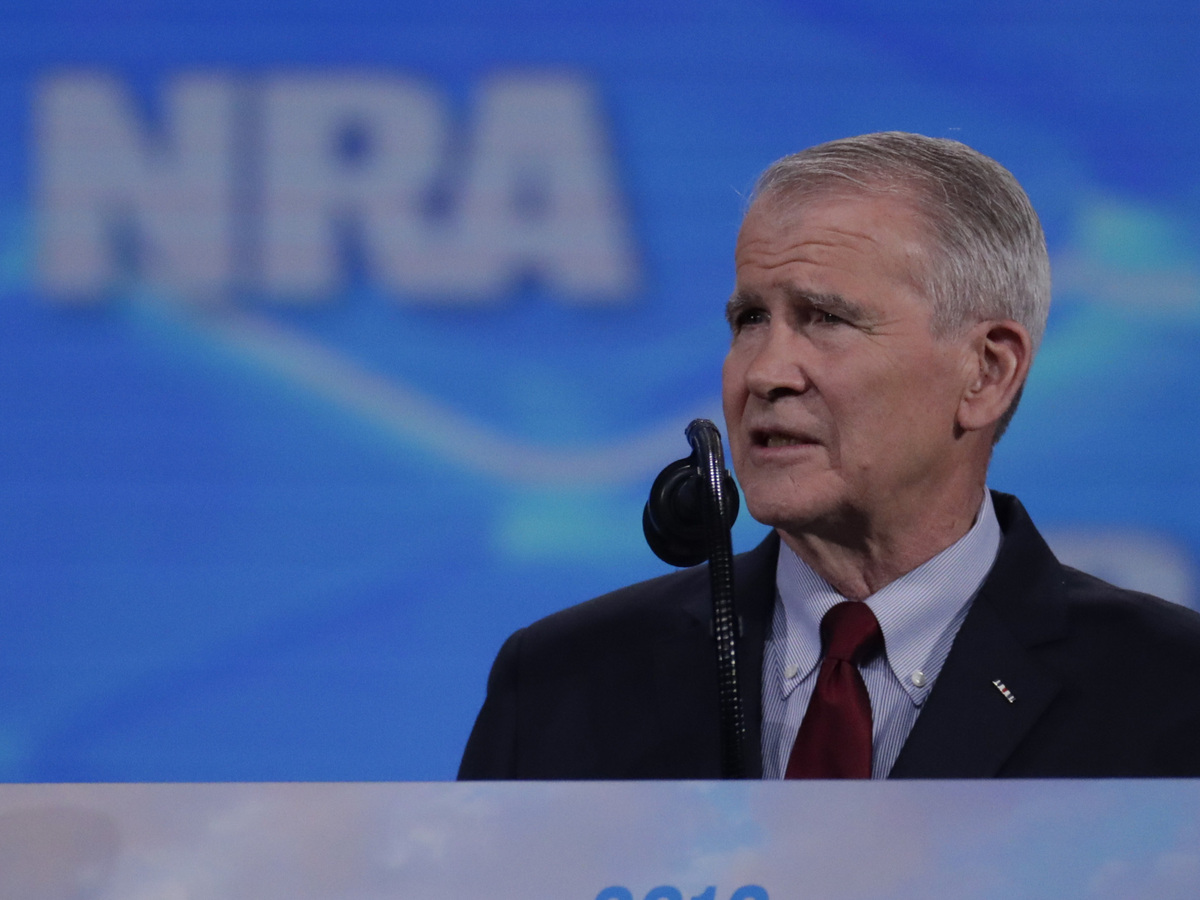 National Rifle Association leader Oliver North announced Saturday that he will not seek a second term as president of the gun rights group, as is customary.

The decision plunged the organization into chaos ahead of a board meeting on Monday and sparked debate among NRA members over a resolution on whether to oust Chief Executive Wayne LaPierre.

North's decision to step aside from his leadership role comes amid infighting within the group and follows a number of articles from The New Yorker, The Wall Street Journal and The New York Times detailing allegations of financial mismanagement by senior NRA officials.

"The current situation," North wrote in a letter to the NRA's membership, means that the organization's "non-profit status is threatened."

Even as the NRA struggled to handle its internal divisions, an external threat emerged this weekend in the form of a new investigation by New York Attorney General Letitia James.

"The Office of New York State Attorney General Letitia James has launched an investigation related to the National Rifle Association (NRA)," a spokesperson for the attorney general told NPR. "As part of this investigation, the Attorney General has issued subpoenas. We will not have further comment at this time."

The NRA has received a document preservation notice in connection with the investigation being undertaken by the New York attorney general, according to a source familiar with the matter.

The NRA responded to the announcement of the investigation by pledging its cooperation.

"The NRA will fully cooperate with any inquiry into its finances," said William A. Brewer III, an outside lawyer for the NRA. "The NRA is prepared for this, and has full confidence in its accounting practices and commitment to good governance."

North's announcement on Saturday shocked the hundreds of NRA members and donors gathered at the NRA annual meeting in Indianapolis — the news was met with absolute silence.

Following the announcement, rank-and-file NRA members proposed a resolution holding LaPierre accountable for the allegations of financial mismanagement within the organization and calling for him to step down.

The resolution was ultimately defeated, but not before a passionate debate broke out among members — with escalating rhetoric. Some members demanded information on the allegations of financial impropriety. Others suggested that because of ongoing litigation, the matter should not be debated in public. At one point, one NRA member compared the resolution to an attempted hanging of LaPierre.

North — who is perhaps best known for his role in the Reagan-era Iran-Contra affair — was expected to join Saturday's meeting himself, but his chair onstage was empty.

"Please know I hoped to be with you today as NRA president, endorsed for reelection," North wrote in a letter, read aloud to the NRA membership by NRA First Vice President Richard Childress. "I am now informed that that will not happen."

North, who has served on the NRA board for more than two decades, said there was a "clear crisis" within the organization that "needs to be dealt with immediately and responsibly so the NRA can continue to focus on protecting the Second Amendment."

North said he had been approached by LaPierre in the spring of 2018, asking him to retire from his post at Fox News to become president of the gun rights group.

North said he accepted a salaried position with Ackerman McQueen, one of the NRA's most prominent outside contractors, as part of the agreement. NRA presidents typically do not receive a salary from the organization.

He said that after starting as president in September 2018, he was "confronted by NRA board members and donors" about how much the association was paying for an outside law firm. His attempts to address the problem, he said, were "rebuffed repeatedly." He also stated that before his departure, he had started a "crisis committee" to deal with the allegations.

The NRA recently filed a lawsuit against Ackerman McQueen, which for decades has served as an outside group shaping the NRA's messaging. The lawsuit alleges the firm refused to comply with requests to justify its billings. In a statement to the Wall Street Journal, the firm said the suit was "frivolous, inaccurate and intended to cause harm to the reputation of our company."

The NRA has been plunged into internal turmoil at a vulnerable time. It was outspent by gun control groups in the 2018 midterm elections. Public financial disclosures suggest that fundraising is lagging and that the organization is running at a deficit. Congressional investigators have been keen to probe the organization's donors.