Accessibility links
California Synagogue Shooting Leaves 1 Killed, 3 Injured The mayor of Poway, Calif. said the shooting at the Chabad of Poway synagogue near San Diego was a "hate crime." A 19-year-old man has been arrested. 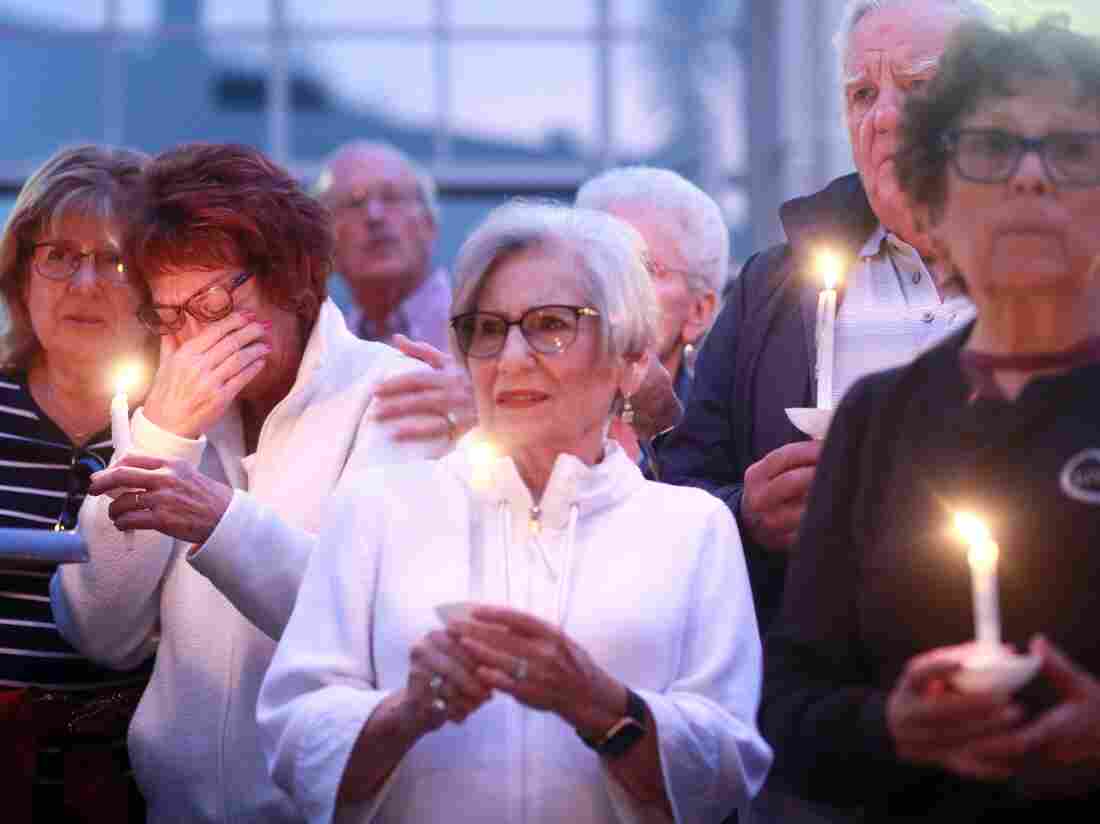 Mourners participate in a candle light vigil for the victims of the Chabad of Poway Synagogue shooting at the Rancho Bernardo Community Presbyterian Church on April 27, 2019 in Poway, Calif. Sandy Huffaker/AFP/Getty Images hide caption 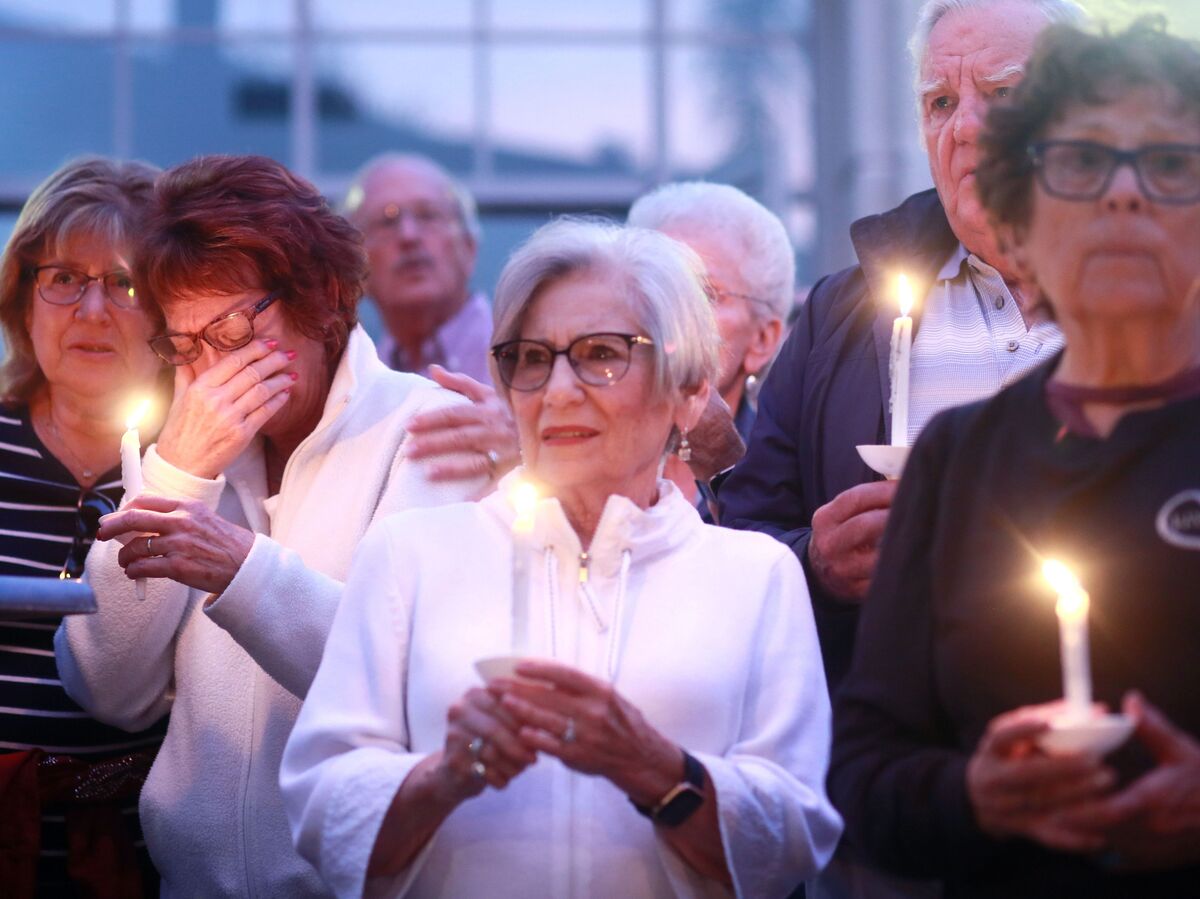 Mourners participate in a candle light vigil for the victims of the Chabad of Poway Synagogue shooting at the Rancho Bernardo Community Presbyterian Church on April 27, 2019 in Poway, Calif.

The incident took place at the Chabad of Poway synagogue in the San Diego suburb of Poway, Calif., and came on the final day of Passover.

Authorities say the suspect fled the synagogue and called police to say he was involved in the shooting. Following his arrest, they identified him as 19-year-old John Earnest of San Diego.

Reports say a document posted online by someone with the same name is full of anti-Semitic and anti-Muslim views and claims responsibility for setting a nearby mosque on fire in March.

Four people were wounded and taken to a hospital, where a woman died from her wounds, police said.

Friends and members of the congregation identified the woman who died as 60-year-old Lori Gilbert Kaye of Poway.

"She's a huge presence here. She's just one of those people that were always here in some form or fashion," fellow congregant Tanya Wervy told Max Rivlin-Nadler in a report for NPR. Wervy said Gilbert Kaye was a generous person who will be missed.

"Witnesses said she jumped in front of the synagogue's founding rabbi, Yisroel Goldstein, who was wounded in the index fingers on both hands," The San Diego Union-Tribune reports.

Police say a rabbi suffered gunshot wounds to his hands and underwent surgery, while a 34-year-old man and child were hit by bullet shrapnel. Doctors say they are doing well, the San Diego County Sheriff's Department said.

The child was transferred to a children's hospital. 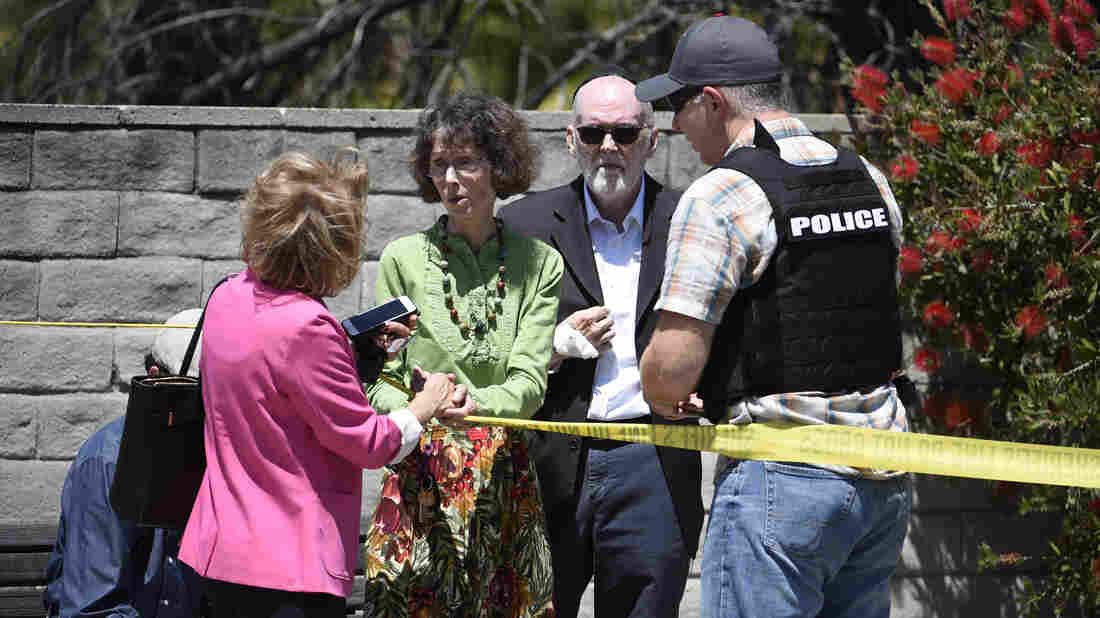 Synagogue members talk to a San Diego County Sheriff's deputy outside of the Chabad of Poway Synagogue on Saturday in Poway, Calif. Denis Poroy/AP hide caption 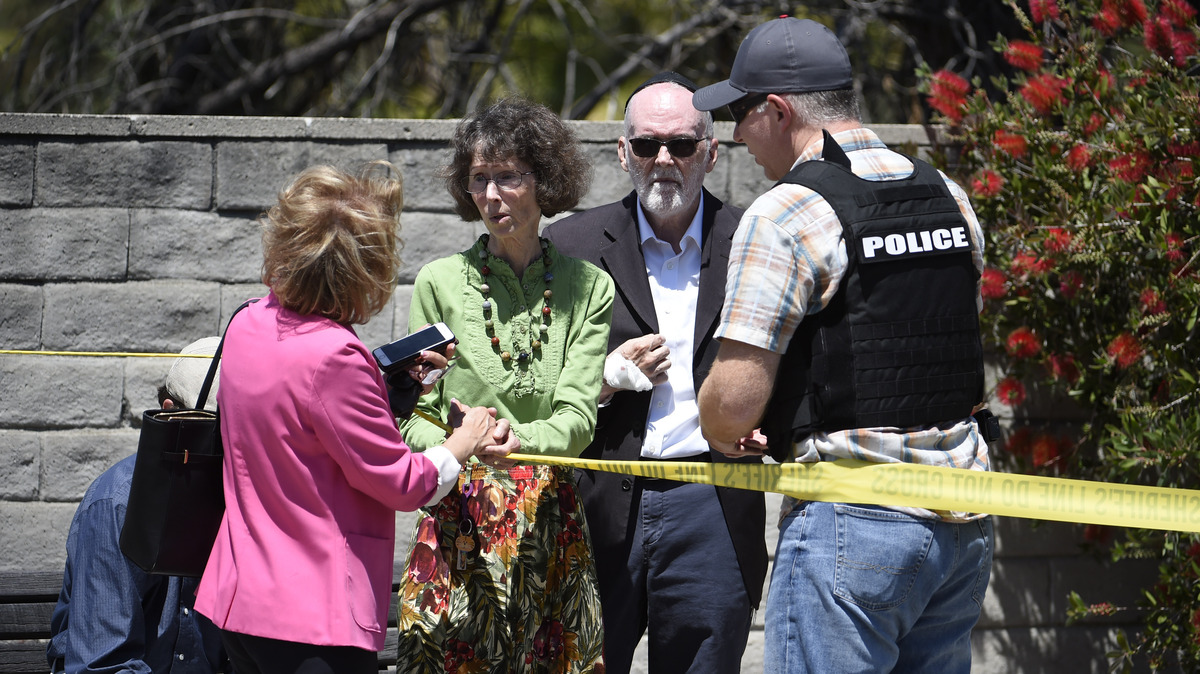 Synagogue members talk to a San Diego County Sheriff's deputy outside of the Chabad of Poway Synagogue on Saturday in Poway, Calif.

The suspect had an AR-style assault weapon in his vehicle when he was arrested, according to authorities. They say he had no prior arrest warrants or contact with law enforcement, and that they are reviewing social media posts and a letter attributed to the suspect.

The shooting is being investigated as a possible homicide, hate crime and federal civil rights violation. Authorities are also working with the FBI to investigate whether the suspect is linked to the mosque arson.

The shooting occurred six months to the day since 11 people were killed at the Tree of Life synagogue in Pittsburgh.

Sara Bloomfield, the Director of the U.S. Holocaust Memorial Museum, said in a statement, "Moving forward this must serve as yet another wake-up call that antisemitism is a growing and deadly menace. The Holocaust is a reminder of the dangers of unchecked antisemitism and the way hate can infect a society. All Americans must unequivocally condemn it and confront it in wherever it appears."

The Chabad of Poway synagogue was scheduled to host a Passover Holiday Celebration on Saturday, beginning at 11 a.m., according to its website. The festivities were scheduled to conclude with a holiday meal at 7 p.m.

But shortly after the scheduled start time, deputies were called to the area.

Speaking to a crowd of supporters at a rally in Green Bay, Wis. on Saturday, President Trump offered his condolences to members of the synagogue.

"Tonight, America's heart is with the victims of the horrific synagogue shooting in Poway, Calif., just now," the president said. "Our entire nation mourns the loss of life, prays for the wounded and stands in solidarity with the Jewish community. We forcefully condemn the evil of anti-Semitism and hate, which must be defeated."

He also thanked law enforcement for their "courageous response."

The sheriff's department said it was not aware of any more threats to the community.