Accessibility links
In India, Ayurveda Is A Booming Business Ayurvedic products and treatments based on ancient Indian healing practices are part of a multibillion-dollar industry. A yoga guru with ties to Prime Minister Narendra Modi has built a retail empire. 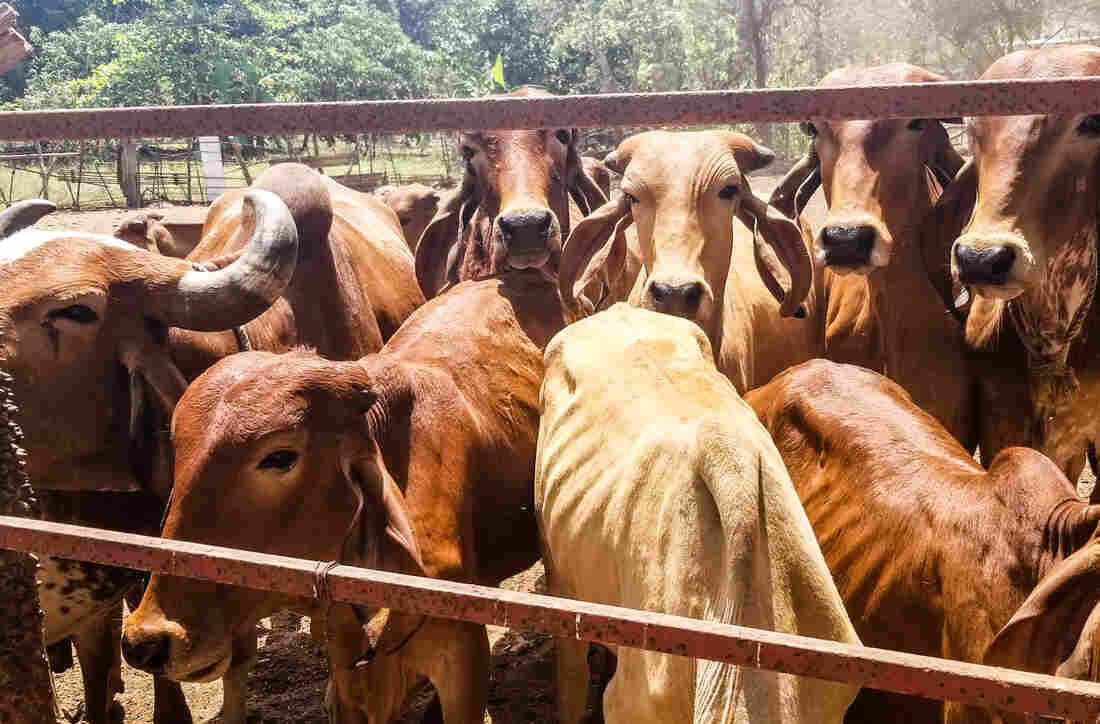 Cows are considered holy to Hindus, and many believe their excrement has healing powers. At a farm north of Mumbai, the urine of these cows is collected and used to make cosmetics. Lauren Frayer/NPR hide caption 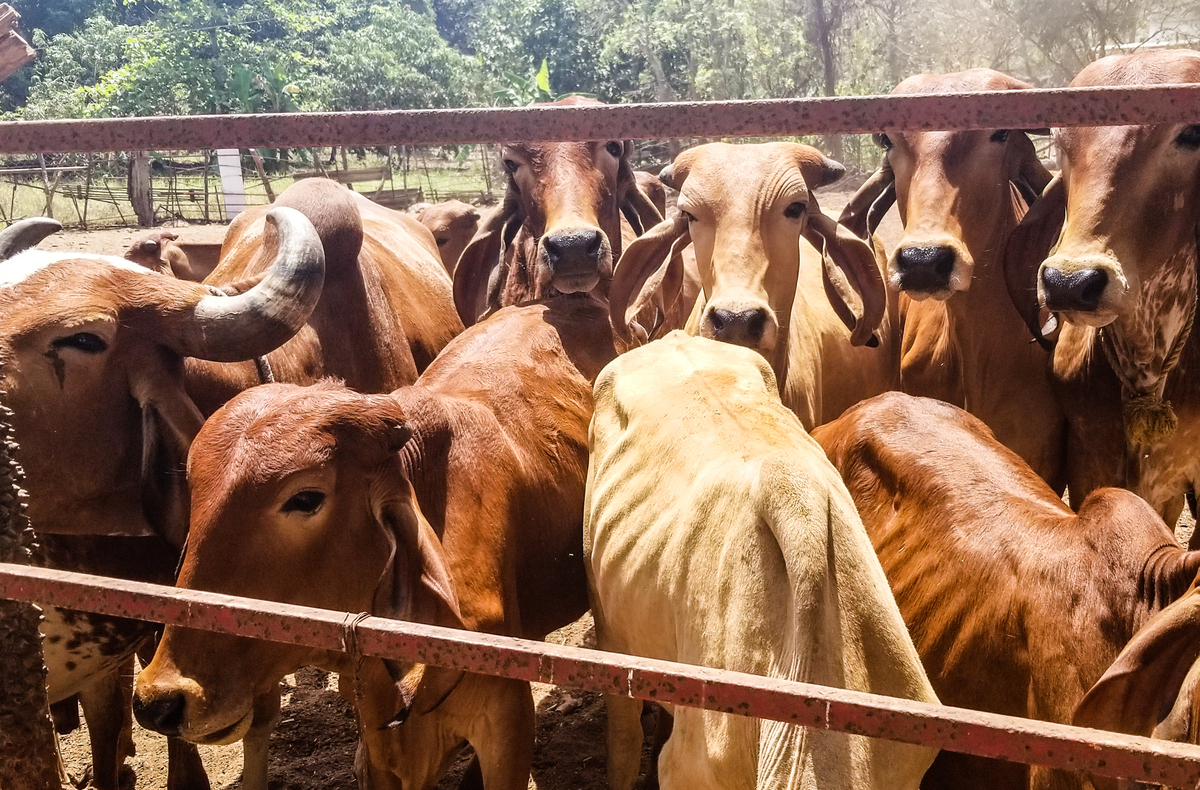 Cows are considered holy to Hindus, and many believe their excrement has healing powers. At a farm north of Mumbai, the urine of these cows is collected and used to make cosmetics.

Outside a barn in a jungle north of Mumbai, dozens of cows roam in the shade of mango trees and palm fronds. They're doted on by the farm's caretaker, a Hindu monk draped in white robes.

Cows are sacred to Hindus. Saved from slaughter, they live out their days in tranquility at shelters like this across India, courtesy of donations made by worshipers at temples.

Many Hindus believe cow excrement has healing powers. So every morning, when the cows awake, farmhands line up with buckets to collect the cows' urine. Dung gets scooped up and spread out to dry in the sun in an even layer or in patties. Soni believes this drying process eliminates bacteria.

This is where entrepreneur Umesh Soni, 35, sources ingredients for his Cowpathy line of cosmetics. At a factory nearby, employees mix cow urine and dung with natural fragrances and oils to make soap, shampoo, face wash — even lip balm. Soni sells the products on Amazon, and has a tiny boutique in downtown Mumbai. 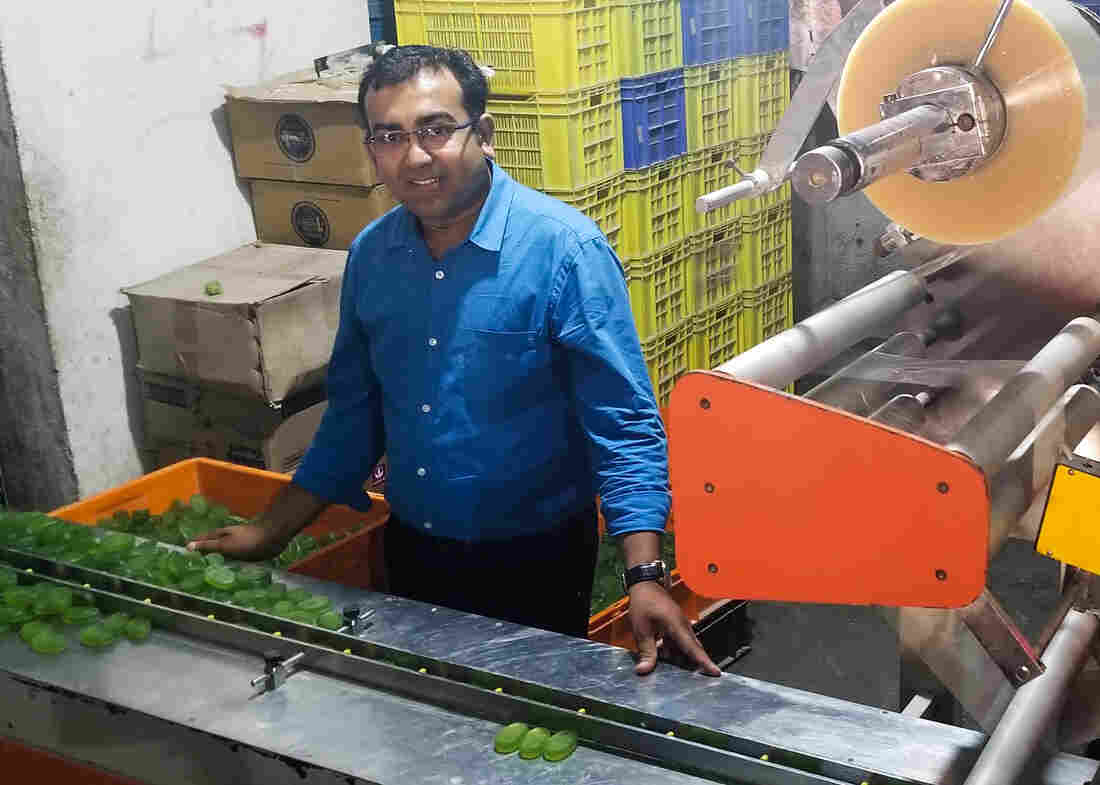 Entrepreneur Umesh Soni, 35, at the factory north of Mumbai where he manufactures his line of cosmetics. Cow urine and dung are some of the ingredients in Soni's products. Hindus believe cows are holy, and that their excrement has healing powers. Lauren Frayer/NPR hide caption 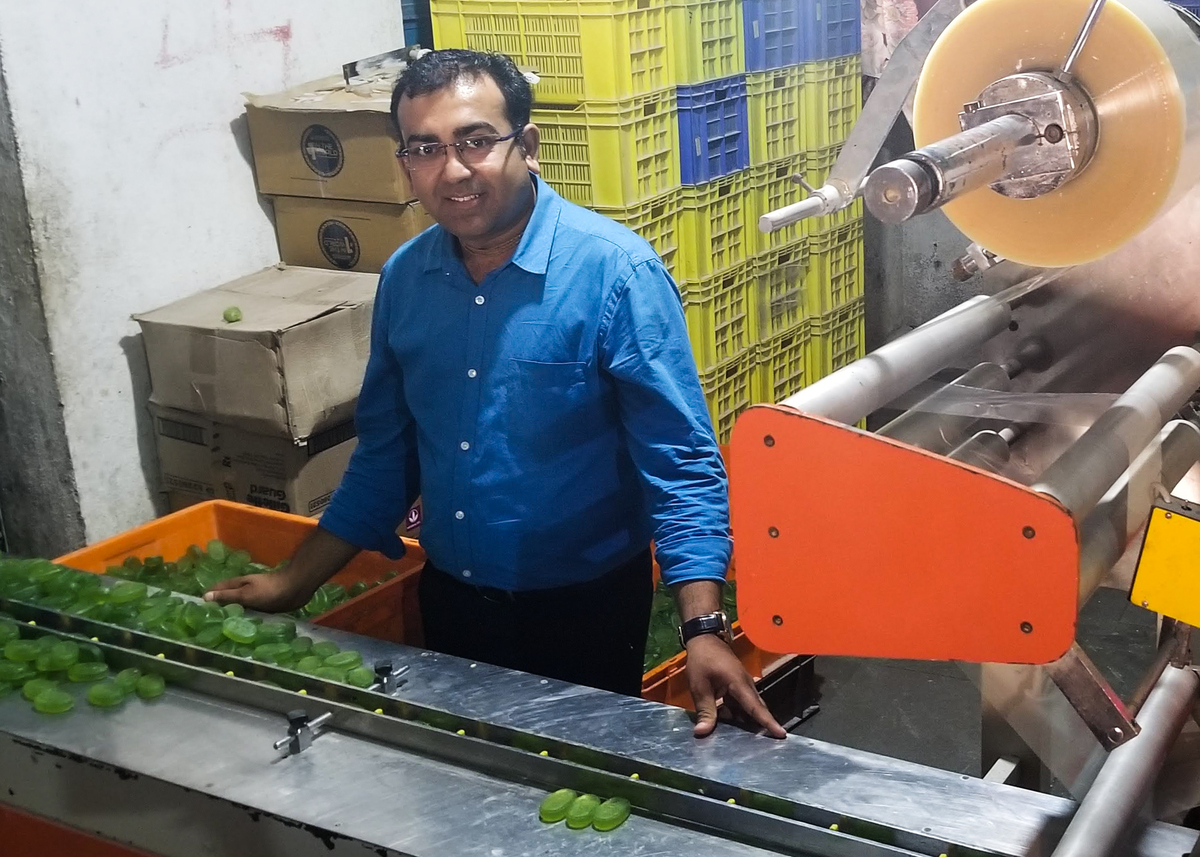 Entrepreneur Umesh Soni, 35, at the factory north of Mumbai where he manufactures his line of cosmetics. Cow urine and dung are some of the ingredients in Soni's products. Hindus believe cows are holy, and that their excrement has healing powers.

At the boutique, a customer is browsing the shelves, filling her shopping basket with soap made from cow urine.

"As a cancer patient, I drink distilled cow urine, and this is where I buy it," says Geeta Jogi, 60. "It's very hygienic and pure."

Cow Dung Soap Is Cleaning Up In India

A preference for distinctly Hindu brands

In the U.S., there's a wellness craze. In India, it's a Hindu wellness craze that includes cow products, and food and cosmetics based on ancient Hindu healing practices known as ayurveda.

It's become a multibillion-dollar industry in India, and it's gotten a boost from Prime Minister Narendra Modi. He's running for a second term in elections that began April 11 and will continue through late May. Modi is a Hindu nationalist who wants the country's majority Hindu faith to play a bigger role in politics, public life — even in local supermarkets.

Soni says his sales have multiplied six times since 2012, his first year doing business, and that his profits have grown similarly. His company now has an annual turnover of more than $356,000, up from $57,000 in 2012.

"This is the modern India. People are wealthy. They are earning good," Soni says. "They want to associate with brands."

Many want brands that are homegrown and distinctly Hindu. A TV ad for a popular ayurvedic toothpaste pokes fun at global brands, showing a toothpaste package mimicking Colgate labeled "Chemicalgate" and "Weak Paste." The message: embrace traditional Hindu remedies instead.

Modi has championed traditional remedies and practices such as yoga.

"Yoga is part of India's ancient heritage," Modi told the United Nations General Assembly in 2014. "It's not about exercise, but to discover the sense of oneness with yourself, the world and the nature." Following Modi's proposal, the U.N. declared an International Day of Yoga.

While Modi has pushed yoga as part of India's soft power abroad, someone else has long been doing that in India: a barefoot, bearded, 53-year-old Hindu monk named Ramkrishna Yadav — better known as Baba (Father) Ramdev. 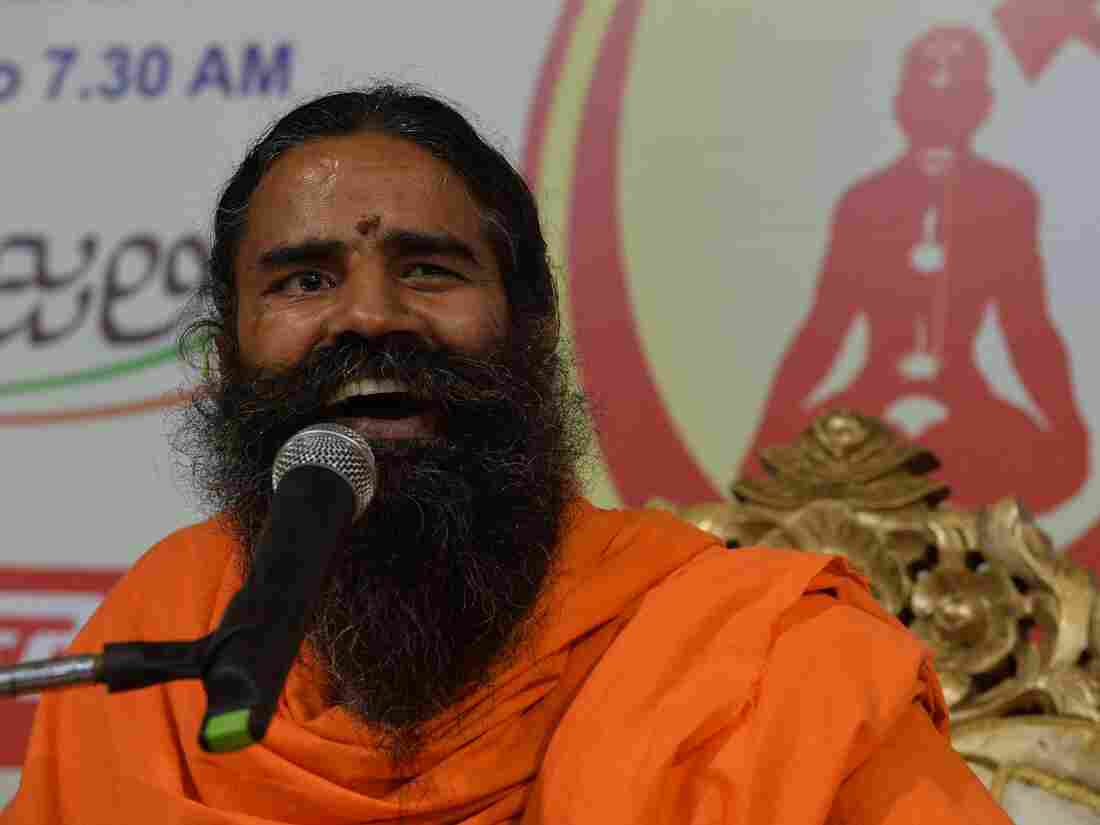 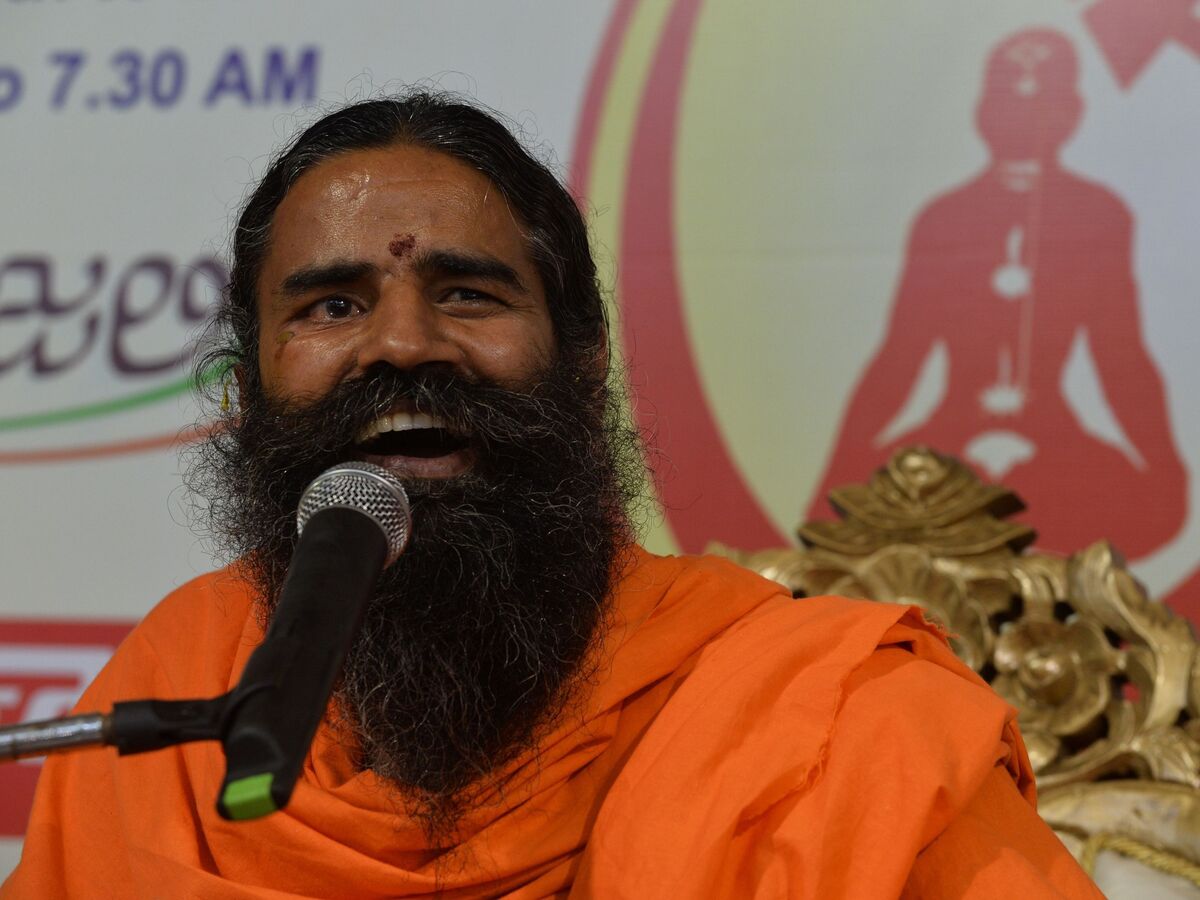 Like Modi, Baba Ramdev comes from a poor family. Both men are self-made. Modi says he was a tea seller as a young man. Ramdev became a monk, and first shot to fame in the early 2000s, teaching yoga on an early-morning TV show. Since then, he's expanded into selling ayurvedic products — everything from instant noodles to aloe vera gel (and the toothpaste whose ad makes fun of other brands). 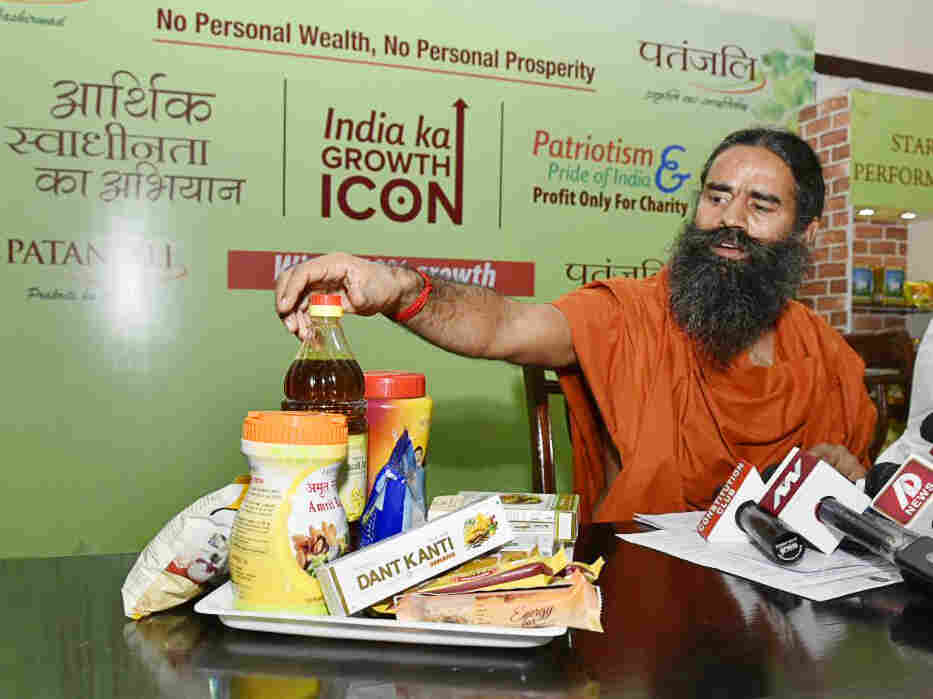 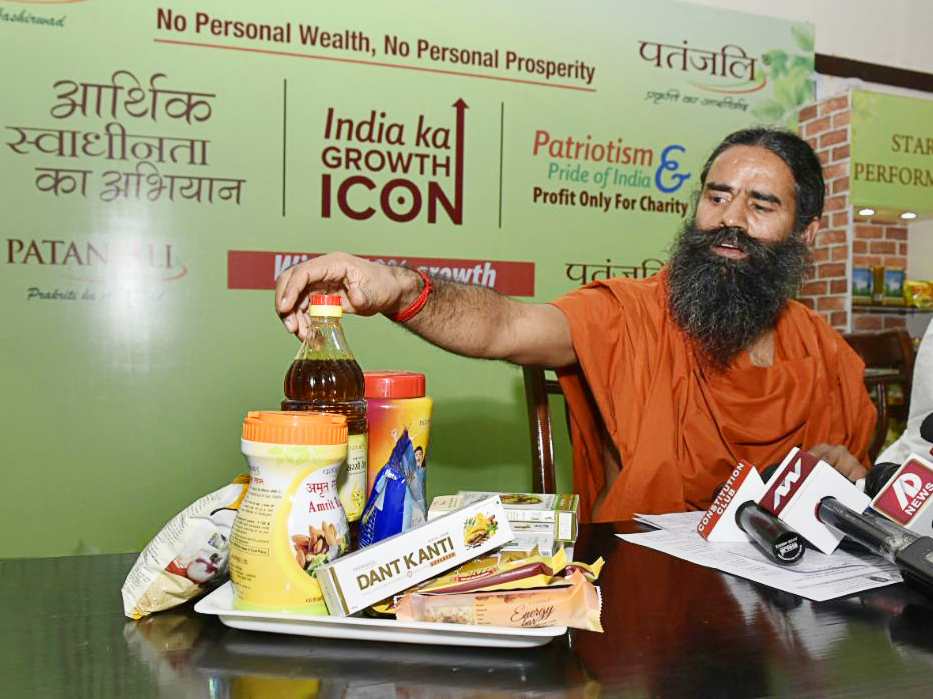 Baba Ramdev shows some Patanjali products in 2016 in New Delhi.

While Modi has put Hinduism into politics, Ramdev has put it into shopping carts. It's difficult to find a market in India that doesn't sell his products. Ads for Patanjali products feature photos of him in saffron robes on billboards across the country.

In 2017, Ramdev's company, Patanjali Ayurved Limited, saw revenues of $1.6 billion and surpassed consumer goods giants like Nestlé India and Godrej in volume of sales. In the past six years, its revenues have multiplied more than 10 times, though sales have slumped in the past two years. 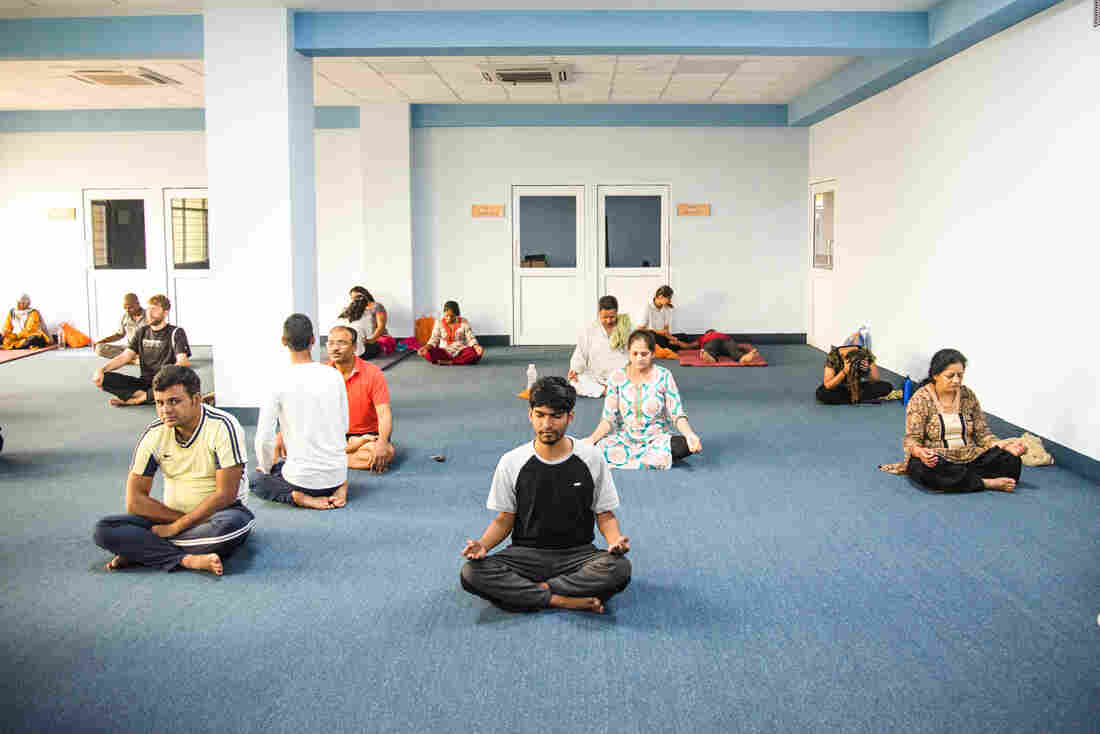 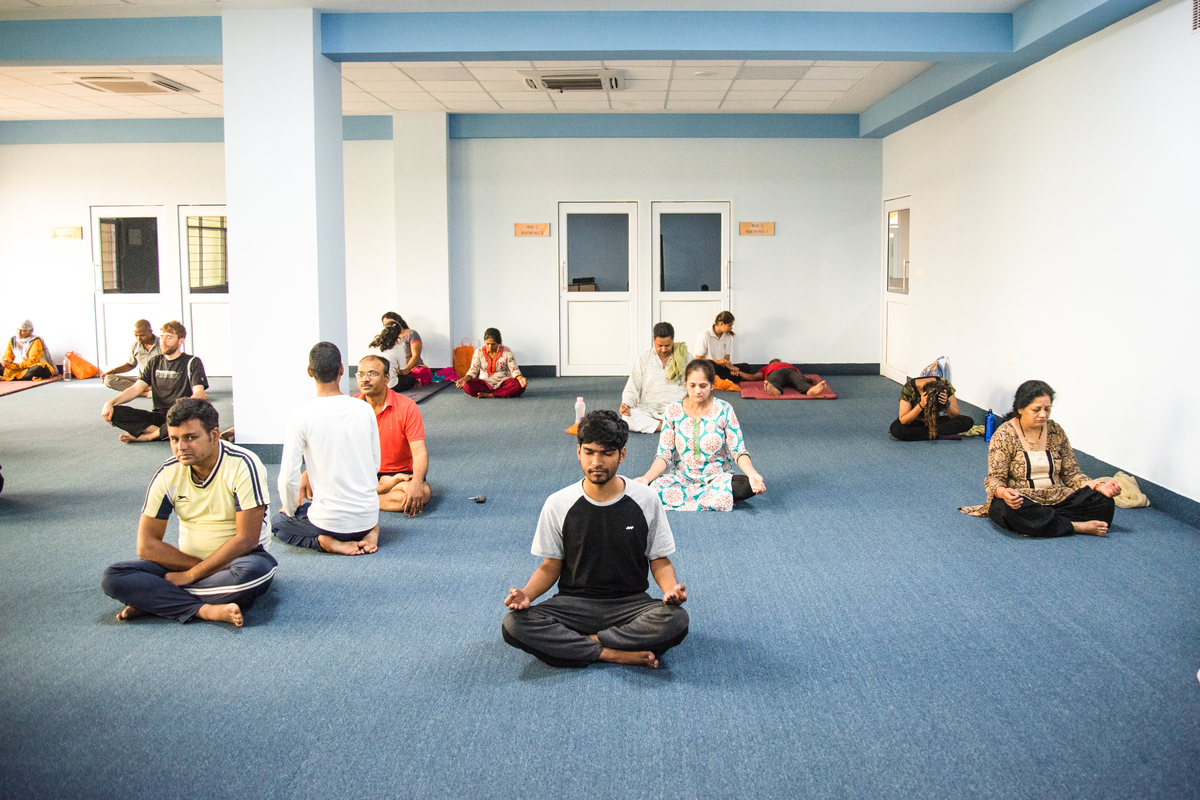 "It's like Walmart on drugs," Priyanka Pathak, the Mumbai-based author of a biography of Ramdev, says of the company's quick growth.

Last year, Indian courts ordered a halt to any further publication or distribution in India of Pathak's book, which had been published by Delhi-based Juggernaut Books. The ban came after Ramdev's lawyers filed a complaint alleging the book defames him by suggesting he may be involved in criminal activity.

Ramdev has never been charged with a crime. But for years, authorities have been investigating Patanjali for possible tax evasion. In 2016, the company was found guilty of mislabeling products, and fined nearly $16,000. Dozens of lawsuits have been filed against a Patanjali trust for alleged corruption in land deals. 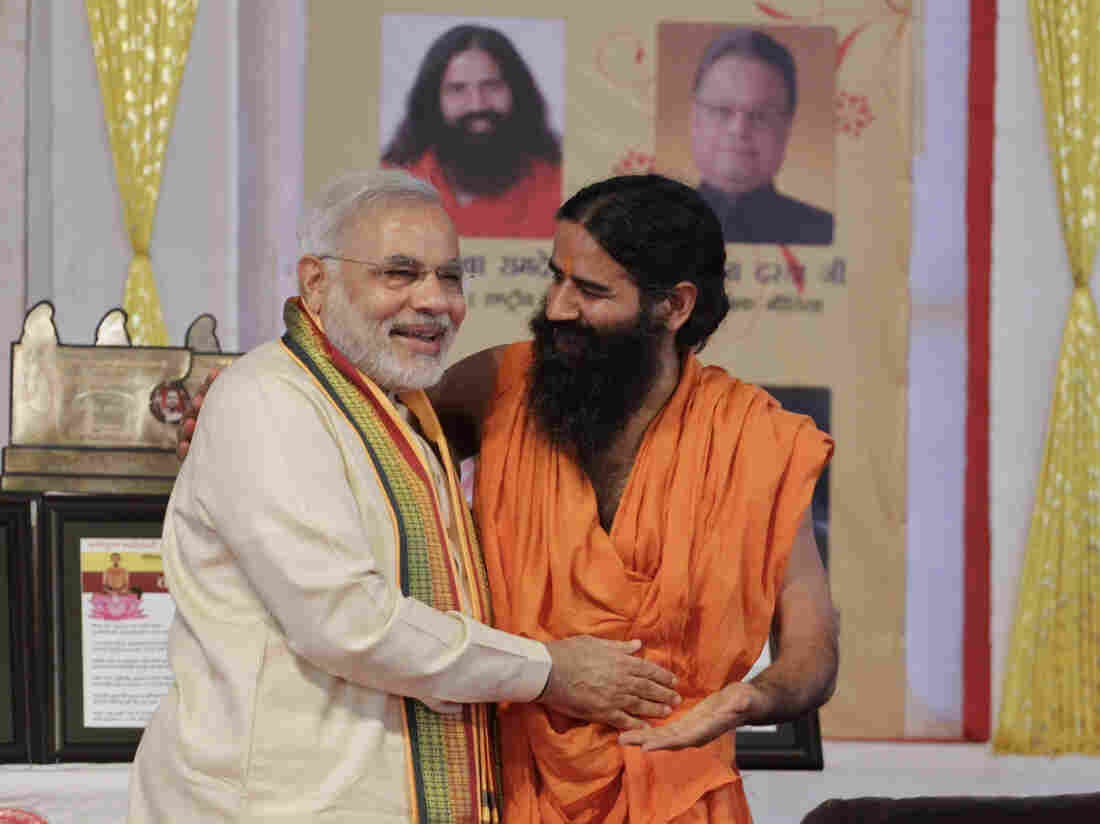 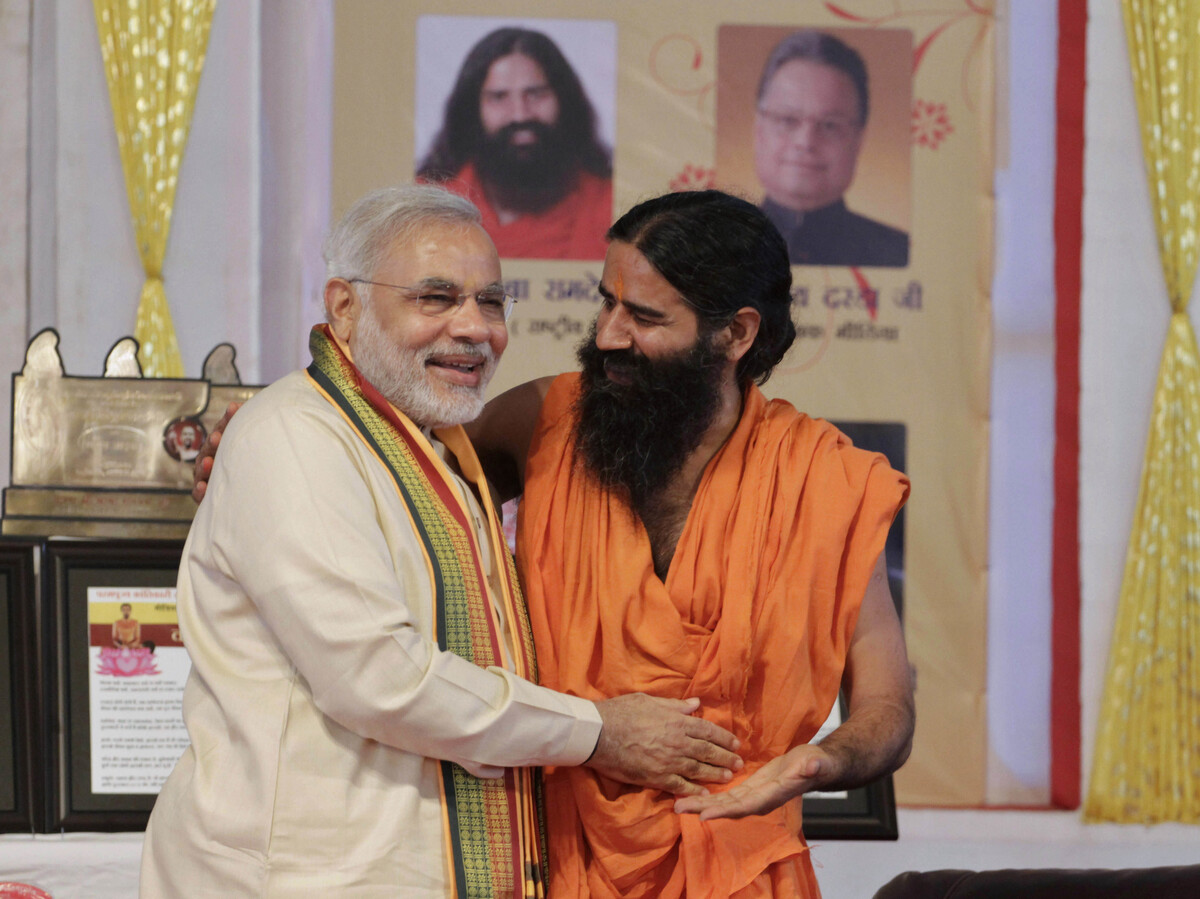 Baba Ramdev, shown here with Narendra Modi in 2012, campaigned for Modi when he first ran for prime minister five years ago.

Citing scheduling conflicts over a period of several months, Ramdev's secretary said the guru was not available for an NPR interview.

The success of Ramdev's Patanjali and popularity of cow products and ayurveda in India may be an effect of globalization, Pathak believes. India's economy — a closed one until the 1990s — has opened quickly to the world, she says, and that can be bewildering to consumers.

The answer, Pathak says, is to buy products that reflect the Hindu identity you don't want to lose.

A "feeling of being left out by Indian modernity"

That's also Modi's message: that the Hindu faith is being diluted — whether by globalization, secularism or immigration — and Indians must protect it and elevate it in politics and public life.

Together, Modi and Ramdev have managed to unite religion, politics and commerce in their effort to promote Hindu nationalism.

"Both of them are able to talk to a constituency that nobody has been able to speak to so far — not doctors, not companies, not traditional politicians," says New Delhi-based anthropologist Bhuvi Gupta, who has studied Ramdev in the context of Hindu nationalism. "They are able to tap into this feeling of being left out by Indian modernity."

The politician and the business guru are also good friends. Ramdev campaigned for Modi when he first ran for prime minister in 2014. Once in power, Modi created a government ministry to promote ayurveda. It gives loans to entrepreneurs and wellness centers, and claims to have boosted the number of ayurveda patients in India by as much as 20 percent.

In India, testimonials claim ayurveda cures cancer. In the U.S., ayurveda providers promote their alleged success in treating multiple sclerosis, asthma and migraine, among other ailments.

But many scientists are not convinced. 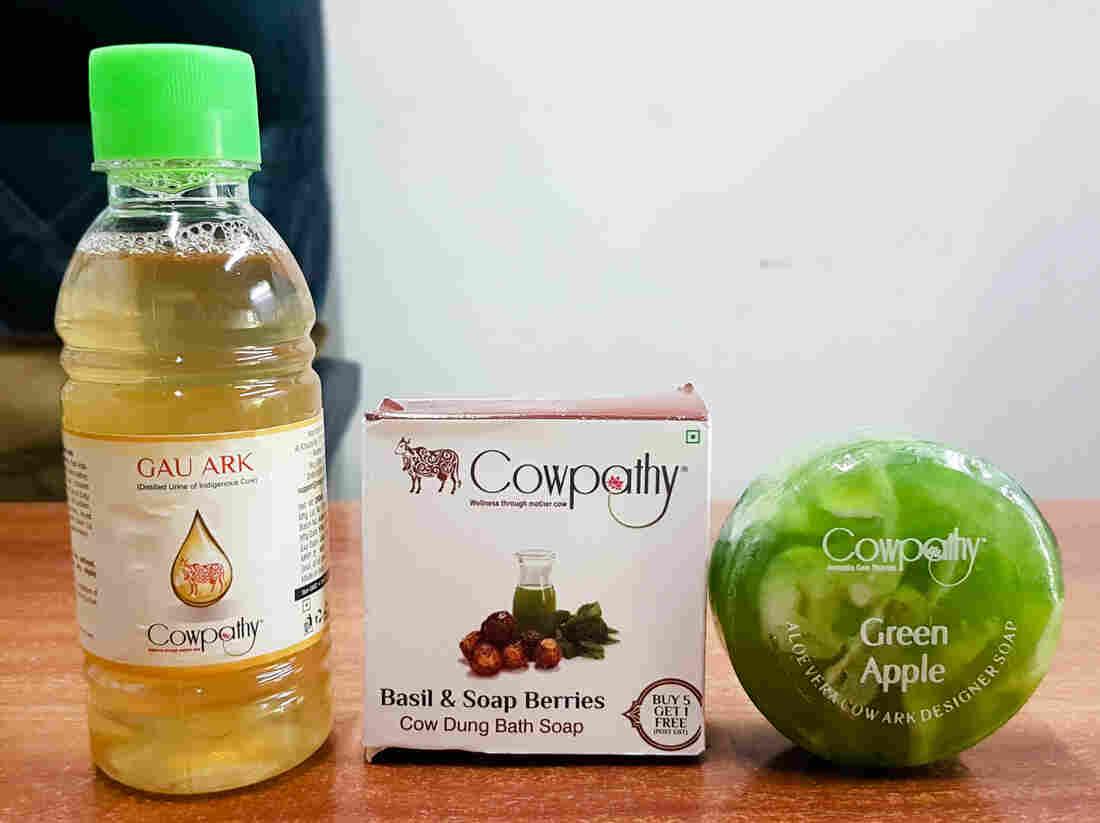 Some of the products on sale at Umesh Sonia's boutique in Mumbai include bottles of distilled cow urine, soap made from cow dung, floor disinfectant made from cow urine, under-eye gel and toothpaste made from cow excrement. This is part of a growing retail market in India. Sushmita Pathak/NPR hide caption 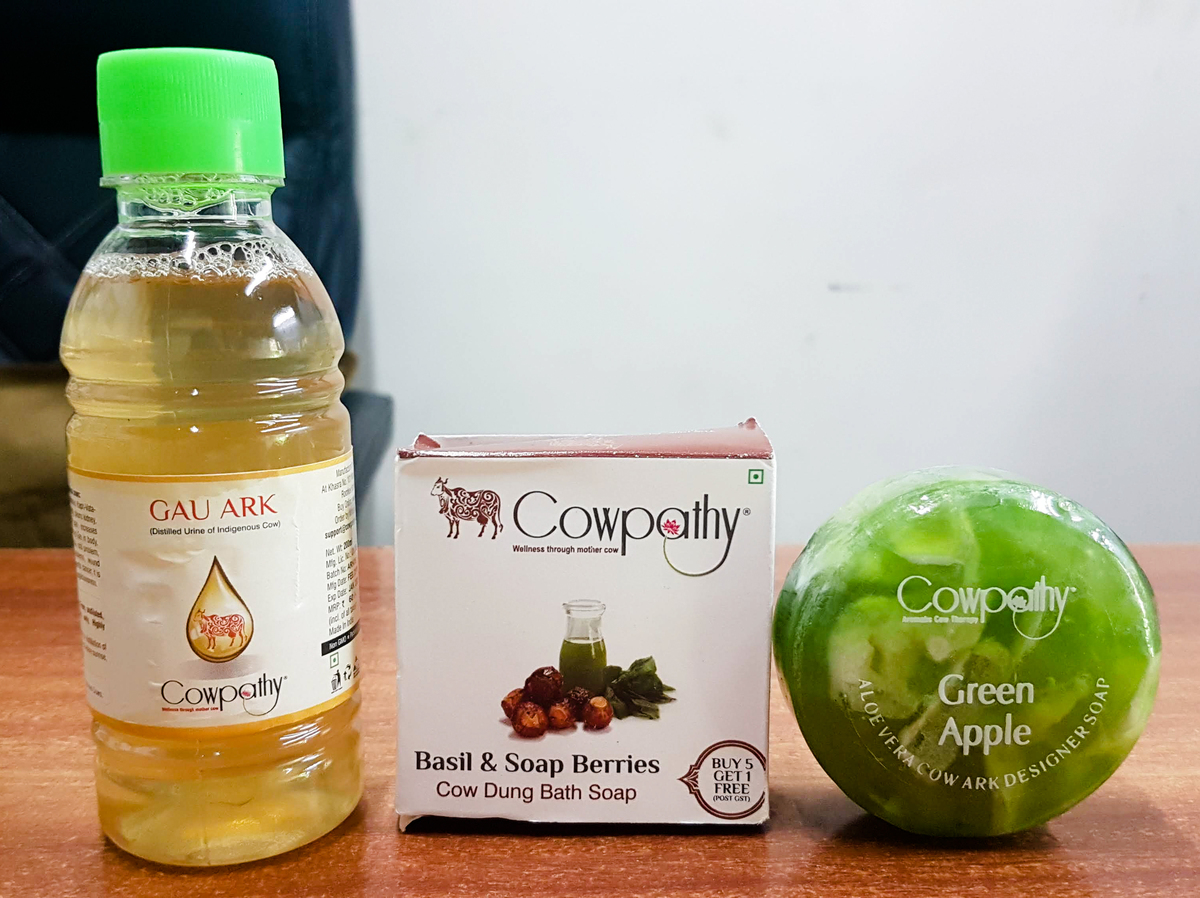 Some of the products on sale at Umesh Sonia's boutique in Mumbai include bottles of distilled cow urine, soap made from cow dung, floor disinfectant made from cow urine, under-eye gel and toothpaste made from cow excrement. This is part of a growing retail market in India.

In the ancient Indian language of Sanskrit, ayurveda means "science of life." Today the word is used to describe a wide array of products, from diet supplements, spa treatments and cow urine-based cosmetics to herbal medicines aimed at curing disease.

The U.S. National Institutes of Health's center on alternative medicine says "there is little scientific evidence on ayurveda's value" for most medical issues and has warned that some ayurvedic preparations may contain toxic amounts of lead, mercury or arsenic.

For consumers in India, "The problem comes when you are suffering from diabetes or AIDS, and you're told, 'Stop taking insulin and take our product,'" says Meera Nanda, a microbiologist who has examined the efficacy of ayurveda and wrote a book about its marketing. "That is where the real problem comes in."

Nanda says the Indian government's ayurvedic ministry has lax standards and conducts insufficient clinical testing. It's a parallel regulatory body that pushes popular ayurveda treatments to market more quickly, she says, than the Indian equivalent of the Food and Drug Administration does for conventional pharmaceuticals.

Nanda says she would like to see government resources put toward extending lifesaving conventional medicine to all Indians.

"If the middle classes feel comfortable using cow dung soap, that's up to them — it's their money," she says. "But given the sad state of health in India, and complete lack of access to proper medical care, that's the best we can do for them? That breaks my heart. It really does."

"The importance of our Hindu culture"

Back at Soni's boutique in Mumbai, Geeta Jogi, the cancer patient, says she believes cow urine is good for her health — and also good for cows, who are kept in shelters and having their urine collected, rather than going to the slaughter. It's like fair trade, Hindu-style.

"It's also part of us rediscovering our Hindu identity," she says. "The next generation should realize the importance of our Hindu culture."

With that, she tosses into her shopping basket a few extra cow dung items — which she likes to send to her grandson in America.