Accessibility links
NPR Review: 'Any Other Place,' By Michael Croley Most of the people Michael Croley's debut story collection feel like they don't belong, even in the places they call home — and Croley conjures that unsettled feeling in understated, beautiful prose.

In 'Any Other Place,' Struggling With The Feeling That Something's Not Right

In 'Any Other Place,' Struggling With The Feeling That Something's Not Right 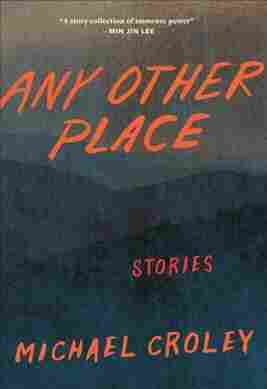 The title of Michael Croley's debut short story collection, Any Other Place, evokes a kind of desperation that's familiar to anyone who's longed to escape their hometown. It's not a universal sentiment, but it's undoubtedly a common one: For some people, whether they grew up in a sprawling metropolis or a claustrophobic small town, the idea of pulling up stakes and moving somewhere — not even one place in particular, just something that's not here — is a seductive one.

Not every character in Croley's remarkable book has that particular brand of wanderlust, but most of them struggle with a feeling of unbelonging, a sense of alienation from the places they call home. It can be a tricky subject to write about, but Croley does so magnificently; the stories in Any Other Place are understated and beautiful, and successfully conjure the unease of ordinary people unable to shake the feeling that something in their lives isn't quite right.

In "Smolders," a teenage boy named Wren Asher reluctantly attends a party thrown by his fellow graduating high school seniors in the fictional town of Fordyce, Ky. (where many of the stories in the collection are set). He makes a last-ditch attempt to convince the girl he has a crush on to move with him to Boston, where he's planning to attend Harvard later that year. Croley does a wonderful job examining Wren's ambivalence about leaving his hometown, where he's never really fit in: "He wanted to be here because he had known these people all his life but he had never truly felt part of them because he was half-Korean, different from everyone else, the lone minority."

'Sing To It' Is Worth The Wait

Wren also appears in the story "Slope," set a decade after "Smolders." Now living in the Northeast and pining for a woman he loves who lives, with her boyfriend, in Paris, Wren has found that even after moving hundreds of miles, he can't escape the racial stereotypes and taunts he endured as a kid. He also finds that his Southern upbringing sets him apart from his fellow city dwellers: "People sometimes ask him to repeat what he says, as if he's a form of entertainment and his speech has the quaint air of someone who is simple." Like "Smolders," it's a quiet story that draws its power from Croley's beautiful but understated writing.

In "Two Strangers," Croley explores a painful homecoming. J.D., the narrator, has left his Kentucky town for New York, but is forced to move back when his best friend is killed in a construction accident, leaving J.D. to raise his young daughter. "I think how I've always thought our lives were moving in opposite directions and that home was our only connection to each other," J.D. thinks. "But home doesn't even sound like the word to describe Fordyce anymore, it's been so long since I've lived here. I don't know what I can claim of it."

The story illustrates one of Croley's most notable gifts: While his stories find regular people in desperate situations, he never overplays his hand — nothing in the book seems forced; he gives his characters ample room to react to their circumstances. Croley writes with a stubborn realism that never comes close to veering into the showy or overwrought.

... the stories in 'Any Other Place' are understated and beautiful, and successfully conjure the unease of ordinary people unable to shake the feeling that something in their lives isn't quite right.

His restraint is evident in "Since the Accident," one of the strongest stories in the collection. It follows Emma, a schoolteacher who's trying to mentally recover from a car crash that slightly injured her and nearly decapitated the other driver. Emma finds herself constantly worrying about her husband, Richard, a police officer, but the couple finds it difficult to discuss the accident and Emma's resulting trauma. "They never call it what it was. They never discuss what happened," Croley writes. "She sometimes feels like a child who has let go of a balloon in the wind and run through a field after it, only to watch it fly farther and farther away."

The story works so perfectly not just because of the dialogue, which is unfailingly true to life, but because of what the characters don't say. In one unforgettable scene, Emma and Richard sit in a Chinese restaurant, discussing their plans to have children — they speak in short sentences, seeming to be on the cusp of telling each other what they're really feeling, but never quite getting there. The tension Croley creates in this scene, and others like it, is powerful, and he makes it look easy. (It's not.)

It's always tempting for writers to loudly telegraph their characters' motives, desires and fears; it takes a special kind of talent, and an implicit trust in an author's readers, to let stories quietly speak for themselves. Croley manages to pull this off in each of the stories in Any Other Place. It's a beautiful collection and a remarkable debut effort from an author with a rare and compassionate understanding of the human condition.