Accessibility links
Whatever Your Feelings On Football, 'Fumbled' Scores Big Alexa Martin is married to a former NFL player, and she puts that experience to good use in her latest football romance — a witty, sexy story about a determined single mom rediscovering an old love. 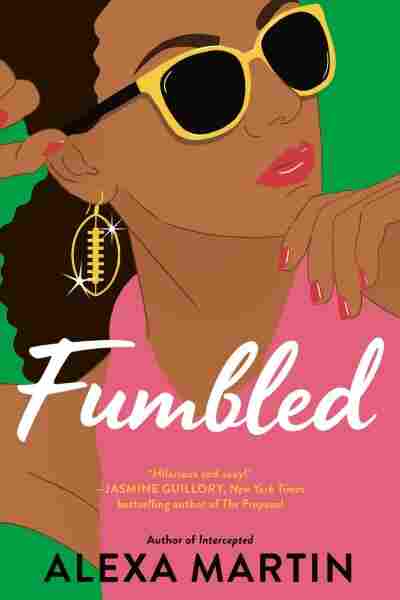 Blending an emotional journey with an intoxicating romance, Alexa Martin's Fumbled — the second novel in her Playbook series — scores touchdown after touchdown in a sports romance set against a backfield of tropes (and only a few clichés).

Poppy Patterson is a waitress at the Emerald Cabaret, a Denver nightclub with a steakhouse on the first floor and aerial acts on the upper levels. But most importantly, she's a single mom with an adorable nine-year-old son named Ace who loves sports, his friends, and his mother. Fiercely independent, Poppy is hardworking, temperamental and stubborn, and she hates taming her "gravity-defying" curls to conform to her job's dress code — which she calls "low-key racist." Poppy also doesn't get along with most of her workmates or the club's grabby VIP clientele. But the job is a sacrifice she willingly makes for her son; she's committed to raising him as an honorable young man, unlike his superstar football-playing dad.

And the identity of Ace's dad is Poppy's best-kept secret.

No one knows that he's actually Denver Mustangs wide receiver Trevor Kyle "TK" Moore — and neither does TK. They were high-school sweethearts until TK bailed on Poppy when she was 16 and pregnant (as did her parents). Taking charge of her life while only a senior in high school, Poppy moved to Denver to live with her aunt and never left, even after her aunt died. Poppy has built a life for herself and her son — and she has no idea that the Mustangs would one day draft her baby daddy. (Though don't use that phrase around Poppy, or you'll get a dose of her explosive temper.)

This 'Devil's Daughter' Has Charm To Spare

When she runs into TK in the parking lot outside the Emerald Cabaret, her emotions are a speeding freight train skidding off the tracks — and no matter how hard her life has been so far, this is when Poppy's struggle truly begins. Do they still care for each other? Will she tell him he's a father, or keep that to herself? After all, he didn't want to see her after she decided to keep the baby. But the truth of why they parted eventually comes out. Now, they're faced with some hard realities — and most of them have to do with Poppy's fear that she'll lose her heart to TK, again, or worse, lose her son to his football-star idol.

Whether you love or hate the sport itself, this story of second chance romance offers an authentic look into the world of pro ball, the paparazzi, the wives and girlfriends, the agents, and the wild and crazy fans that invade their privacy. And Martin — who's married to a former NFL player — is also skilled at delivering the funny. Even during some of the novel's most emotional scenes, Poppy will make you laugh out loud as she wipes away her latest flood of tears. And her admiration for TK's physique is appropriately subtle when necessary but hilariously over-the-top as required. The novel also scores high on sensuality and includes some powerfully romantic scenes.

Still, Martin doesn't shy away from some of the issues that face professional athletes, in particular, those who play football. TK has taken a lot of body blows over his years in the game, although he doesn't seem concerned with the dangers of his occupation. But Poppy can't hide her fears. One day, she believes, she will have to witness his physical and mental deterioration. Fumbled doesn't gloss over the difficult topic of concussions — rather, Martin examines it from both an emotional and a realistic perspective; Poppy actually bars Ace from playing the game.

Martin doesn't shy away from some of the issues that face professional athletes, in particular, those who play football.

The story does feature a number of common but fun tropes, including sports romance, fish-out-of-water (Poppy among the professional football players' wives and girlfriends), second-chance romance, and one of my favorites, secret babies (but only one). However, Martin doesn't overindulge in the tropes. She keeps the story moving, answers questions, and resolves issues, but then piles on more obstacles for Poppy to solve and survive — keeping the tension up and the pages turning.

There are a couple of story threads that seem slightly under-baked. One of the not-so-decent mothers Poppy meets could've used a bit more comeuppance on the page, and the double appearance of a mysterious bouquet didn't add the suspense the author might've intended.

Still, Poppy's choices — and how her decisions affect her son — and TK's feelings toward her and his career keep the happy-ever-after in question until the final pages. And isn't that the heart and soul of good romance? Or at least, the best long pass to the end zone, for a sports romance that really scores.

Denny S. Bryce writes historical fiction and urban fantasy. Her first novel, Wild Women and the Blues, is coming in 2021. In addition to NPR, she writes for Washington Independent Review of Books and Frolic. You can follow her on Twitter @dennysbryce