Accessibility links
Poway Shooting Latest In Series of Attacks On Places Of Worship Over the past few months shootings and bombings have targeted churches, mosques and synagogues spanning three continents.

Poway Shooting Latest In Series of Attacks On Places Of Worship

Poway Shooting Latest In Series of Attacks On Places Of Worship 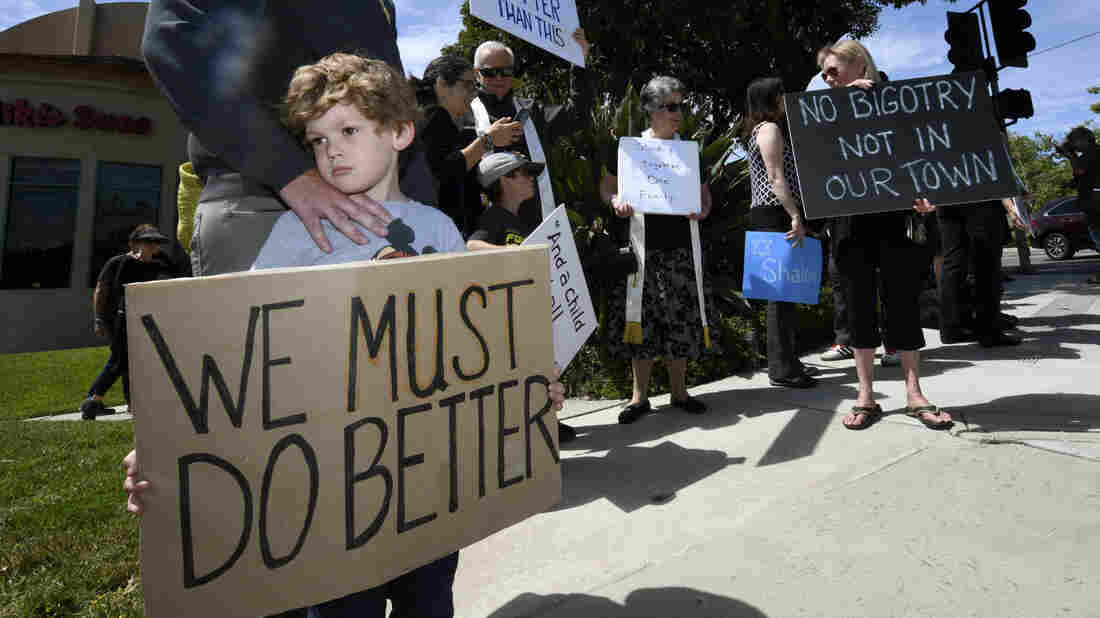 Kyle Fox, 4, and his father Brady Fox hold a sign at a Sunday vigil held to support the Chabad of Poway synagogue. A teenager opened fire at the synagogue near San Diego on Saturday, killing one and injuring three others. Denis Poroy/AP hide caption 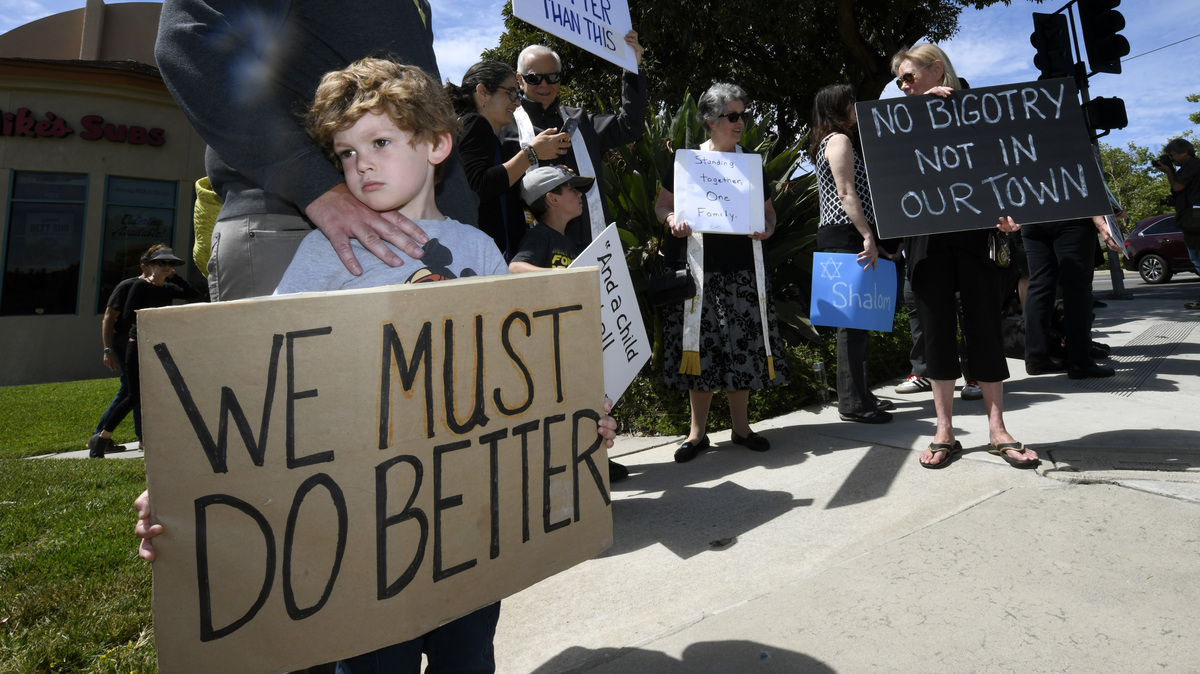 Kyle Fox, 4, and his father Brady Fox hold a sign at a Sunday vigil held to support the Chabad of Poway synagogue. A teenager opened fire at the synagogue near San Diego on Saturday, killing one and injuring three others.

Over the past few months, attackers have targeted places of worship around the world. On Saturday, a gunman opened fire in a California synagogue on the last day of Passover, one of the holiest holidays in the Jewish calendar. The attack on the Chabad of Poway synagogue outside San Diego followed a series of explosions on Christian churches in Sri Lanka on Easter Sunday; mass shootings at New Zealand mosques last month; and a shooting at a synagogue in Pittsburgh six months ago.

Zainab Chaudry, spokeswoman for the Council of American Islamic Relations, told NPR, "Houses of worship are sanctuaries. They are traditionally open spaces where people gather to reflect and honor God, and it's just horrific that the national conversation is about how we can prevent mass shootings, and preventing the scourge of white supremacy that's forcing many communities to live in fear."

"We're seeing diverse faith communities come together and stand up for one another, and pledge to protect one another," Chaudry told NPR.

Jonathan Greenblatt, CEO of the Anti-Defamation League, released a statement, reading, "Jewish people and those of all faiths should not have to live in fear of going to their house of worship. From Charleston to Pittsburgh to Oak Creek and from Christchurch to Sri Lanka, and now Poway, we need to say 'enough is enough.' People in position of authorities, from elected officials to tech CEOs, need to stand united against hate and address it, not only after it happens, but by enforcing norms and standing for our shared values long before such a crime takes place."

The shooting on Saturday occurred 23 minutes after the Chabad of Poway synagogue's scheduled Passover celebration began. Police allege that 19-year-old John Earnest walked into the synagogue, and started firing with an AR-style assault rifle, killing one woman and injuring three others, including a rabbi.

Authorities are reviewing the suspect's digital media posts and a statement he purportedly wrote. They are also investigating whether he is connected to arson at a mosque in a nearby city.

The shooting is being investigated as a homicide, hate crime and federal civil rights violation.

Steve Vaus, the Mayor of Poway, tweeted, "Hate has no place in any community...least of all Poway. We will put our arms around each other and walk through this tragedy as the family we have always been and always will be."

Hate has no place in ANY community... least of all Poway. We will put our arms around each other and walk through this tragedy as the family we have always been and always will be. #PowayStrong

On Easter Sunday a series of explosions ripped through churches and hotels in Sri Lanka, killing more than 250 people, including 45 children. Hundreds of others were injured when seven suicide bombers simultaneously detonated explosive-laden clothing and vests.

ISIS claimed responsibility for the attacks, but has not offered evidence they were behind them. The investigation into the attacks is ongoing, and authorities continue to search for suspects connected to the bombings.

Cardinal Malcolm Ranjith, the archbishop of Colombo, says there will be no Sunday Masses until further notice, and J.D. Anthony Jayakody, auxiliary bishop of Colombo, told CNN, "We never expected such a thing to happen, especially in a place of religious worship."

Six months ago a gunman opened fire at the Tree of Life synagogue in Pittsburgh during Sabbath services, killing 11 people.

The suspect in that shooting pled not guilty to carrying out the attack, and charges including murder, hate crimes and obstruction of religious belief. Authorities say the gunman talked about his desire to "kill Jews" during the shooting, and posted conspiracy theories about Jewish communities online.

Donna Coufal, president of the Dor Hadash congregation, which uses the Tree of Life synagogue, spoke with NPR on Sunday after the Poway synagogue attack. Coufal said, "We're having marches in Pittsburgh today. We care about gun violence. I'm excited about some of the young people studying technology. Maybe we can stop some of the Internet explosion that's increasing this kind of violent language. So I'm - I'm hopeful that there are things that we can do to make changes for our next generation."

She spoke of the resilience of members of the Tree of Life synagogue, months after the shooting there. "We're a pretty strong and tough little group. We hold together," Coufal told NPR. "We're helping our most vulnerable members. And a lot of us who have never had to step up before are stepping up and trying to make a difference."

28-year-old Brenton Tarrant posted an 87-page statement to Twitter just before the attacks detailing white supremacist beliefs, and anti-immigrant and anti-Muslim sentiments. He also livestreamed the shooting on social media.

New Zealand's Prime Minster Jacinda Adern announced plans to ban nearly all semi-automatic and assault-style rifles. She quoted the Prophet Muhammad after the attacks, saying, "The believers in their mutual kindness, compassion, and sympathy are just like one body. When any part of the body suffers, the whole body feels pain."

An earlier version of this story incorrectly stated the Tree of Life synagogue was in Philadelphia. It is in Pittsburgh.