Accessibility links
Judge Damon Keith, Civil Rights Champion, Dies At 96 The Detroit native, one of the nation's longest-serving federal judges, was a tireless champion of civil rights and civil liberties. 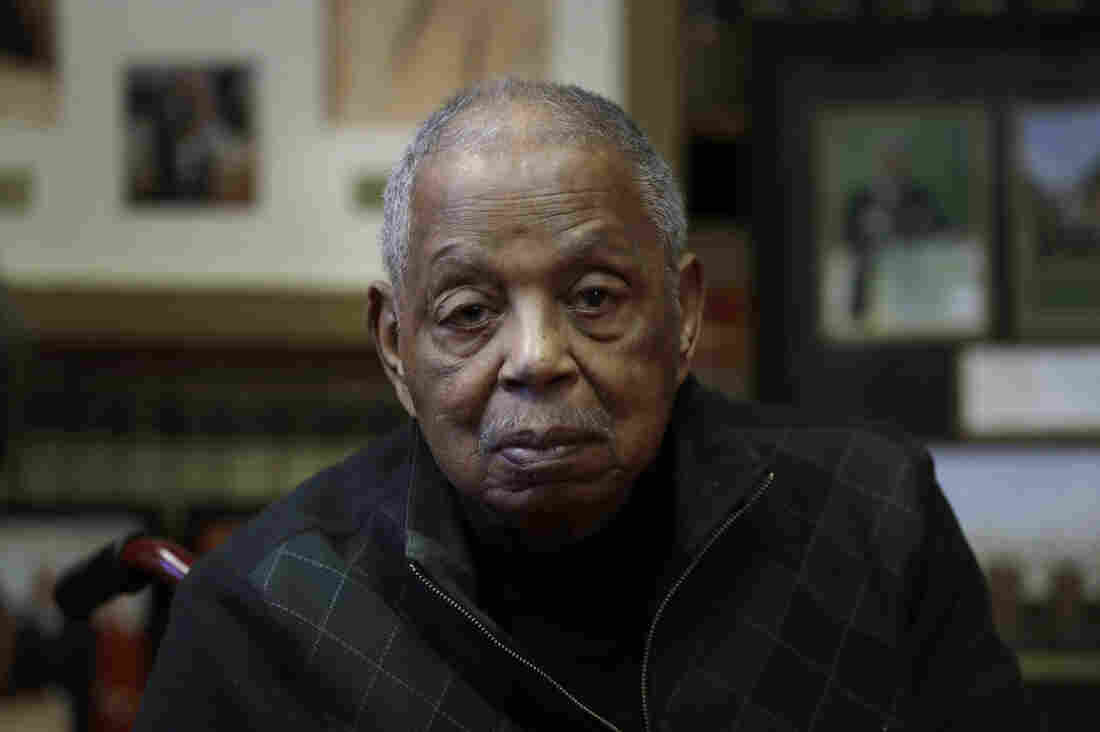 Judge Damon J. Keith, pictured in October 2017 in his Detroit office, died on Sunday at the age of 96. Carlos Osorio/AP hide caption 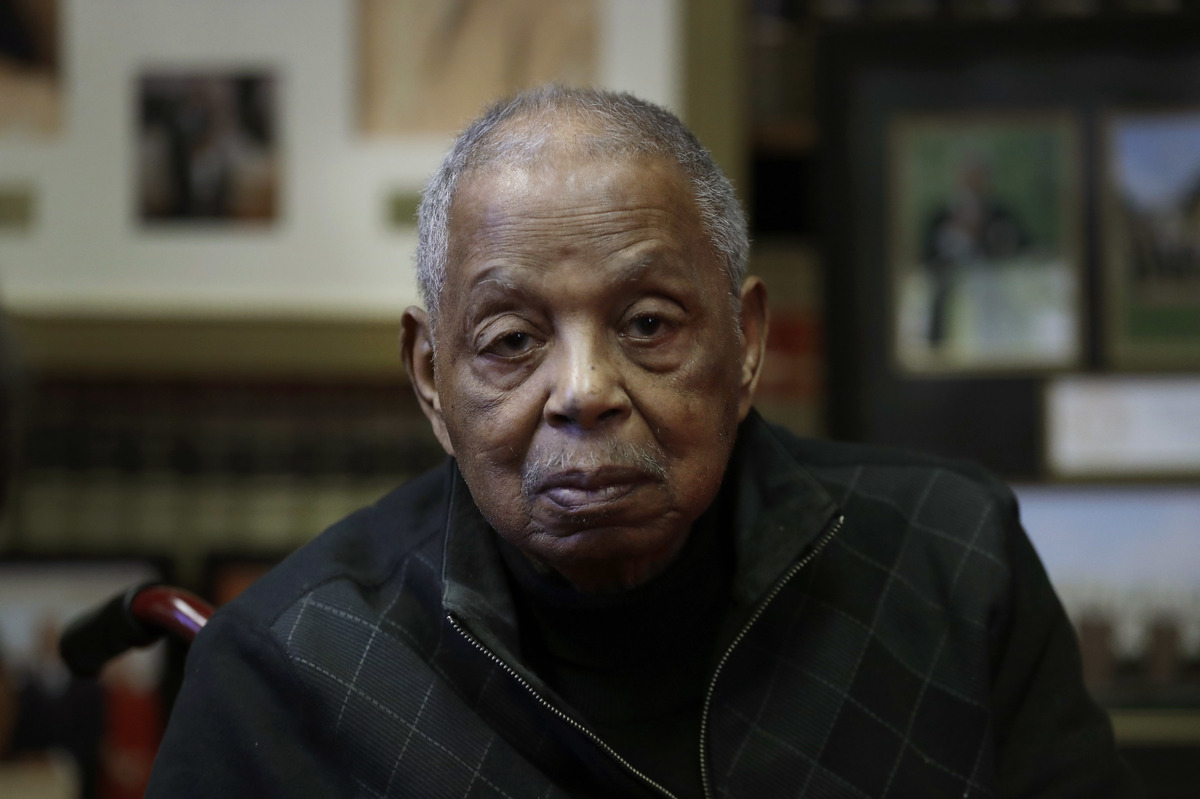 Judge Damon J. Keith, pictured in October 2017 in his Detroit office, died on Sunday at the age of 96.

Judge Damon J. Keith died today at the age of 96. The Detroit native, one of the nation's longest-serving federal judges, was a tireless champion of civil rights and civil liberties.

Born in 1922, Keith was the grandson of enslaved people.

He went on to become the sixth African American in U.S. history to serve on the federal court of appeals.

During his time on the bench, he made a series of landmark decisions that changed the social and legal landscape of the country.

His outstanding accomplishments were all the more remarkable in light of the obstacles of racial bigotry with which he was repeatedly confronted.

In a 2015 PBS interview with Tavis Smiley, Keith described the Detroit of his childhood.

"I never had a black teacher. And the Fisher Y[MCA] was right across from Northwestern high school. Blacks could not go to that Fisher Y," said Keith. "There wasn't a black police officer above the rank of sergeant. There were no black judges. There were no black elected officials."

Traveling to college, Keith was forced to sit in the back of the train because of his race.

He served in a segregated army in World War II.

Even his professional success as a lawyer and then as a judge did not shield him from the sting of racism.

"There's not a day in my life in some way large or small, I'm not reminded of the fact that I'm black," said Keith at age 92 in the same PBS interview.

"Judge Keith's legacy is one of courage, of justice, and a willingness of speaking truth to power," said Wright.

Keith was appointed to a federal court in Michigan in 1967. That was only three years after the federal Civil Rights Act was signed.

In short order, contentious cases landed in his courtroom.

Keith found deliberate systemic race discrimination at work in education in Pontiac schools, in housing in Hamtramck, and in hiring and promotion at Detroit Edison.

And his findings angered those who considered the North to be free of the kind of intentional race discrimination associated with the South.

"What he's been willing to do is to make the really, really difficult decisions," said Saul Green, former U.S. attorney for the Eastern District of Michigan. "But also to put in place remedies that had tremendous breadth and that assured that outcomes truly served those who had been harmed."

Among the remedies he ordered in the Pontiac case was school busing. This unleashed a fury among some white residents that included the burning of school buses.

At times Keith was subjected to death threats, and he and his family were placed under the protection of the U.S. Marshals Service.

"These were not safe decisions," said Peter Hammer, professor of law at Wayne State University and co-author of a biography of Keith. "Either safe politically in what's going to advance your career or make you popular or safe as a matter of physical integrity."

About five years after becoming a federal judge, Keith stood up to President Nixon in what became known as the Keith case.

The case involved three leaders of the White Panther Party, an anti-war and anti-racism group with a far-left ideology. The three were charged with conspiracy to destroy government property, and one of them was charged with bombing the CIA office in Ann Arbor, Mich.

Keith rejected the government's claim that it had the authority to conduct electronic surveillance without a warrant on anyone it considered a national security threat.

Hammer pointed out the courage it took to reach this decision at the height of Nixon's popularity and in the midst of social turmoil over the Vietnam War.

"A young African American judge, against all better counsel, telling the president, 'No,' that not even a president can be above the law and order investigations and wiretaps without a judicial order," Hammer said.

One year after the 9/11 attacks, Keith — who was by then on the federal court of appeals — said no to another U.S. president.

This time Keith said the Bush administration could not conduct deportation hearings in secret using a blanket national security justification.

Writing for a unanimous panel of judges, he coined the memorable phrase "democracies die behind closed doors."

Hammer said Keith remained active and went into his chambers every day well into his 90s.

At the age of 94, he issued a blistering dissent in a 2016 Sixth Circuit Court of Appeals voting rights case, in which the majority upheld new voting requirements in Ohio.

In his dissenting opinion, Keith included the photographs of 36 civil rights martyrs, and he wrote:

"The utter brutality of white supremacy in its efforts to disenfranchise persons of color is the foundation for the tragedy that is the Majority's effort to roll back the progress of history. I will not forget. I cannot forget -- indeed America cannot forget — the pain, suffering, and sorrow of those who died for equal protection and for this precious right to vote."

Keith's life was devoted to using the law to correct injustices, according to Hammer.

"Decade after decade in diverse areas of law, really being the conscience of the country and making the Constitution a living document to protect people's rights," Hammer said.

At Howard University School of Law, Keith studied under Thurgood Marshall, who would later become a U.S. Supreme Court justice and who would through his life remain Keith's mentor.

Keith said Marshall told his students it was their job to turn into a reality the phrase white men had inscribed on the façade of the U.S. Supreme Court building: "equal justice under law."

"Equal justice under law: That's the way I've tried to be as a lawyer and as a judge — make those words meaningful," said Keith in the 2015 PBS interview.

Judge Keith did just that, and in the process, established himself as a civil rights icon and as one of the giants of American law.