Accessibility links
Patricia Arquette Explores Munchausen By Proxy In 'The Act' Arquette plays a Missouri woman who falsely convinced the world that her child was seriously ill, in the Hulu series The Act. She says it was "very weird" getting into the character's head. 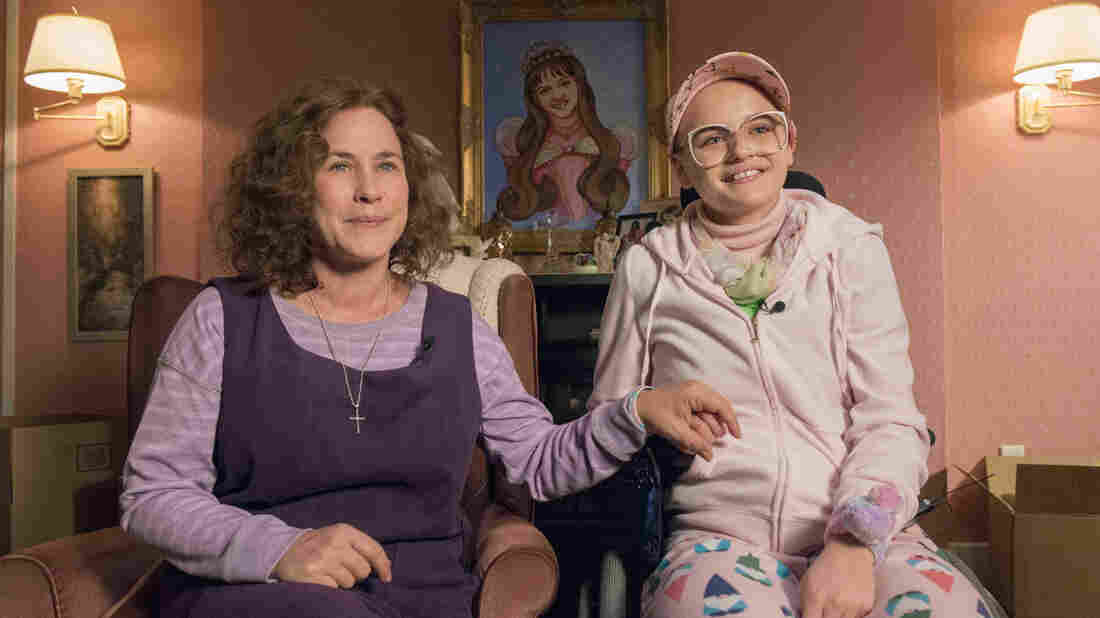 Patricia Arquette plays a mother who convinces the world that her daughter (Joey King) is seriously ill, in the Hulu series The Act. Brownie Harris/Hulu hide caption 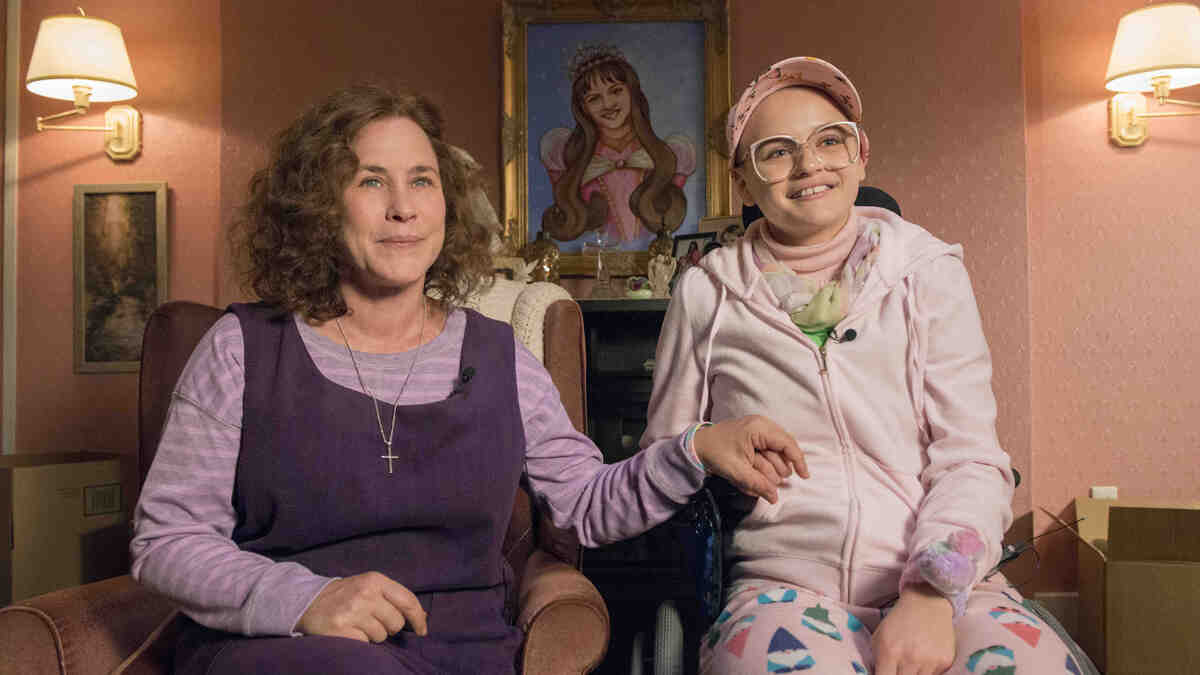 Patricia Arquette plays a mother who convinces the world that her daughter (Joey King) is seriously ill, in the Hulu series The Act.

In 2015, a woman named Dee Dee Blanchard was found stabbed to death in the Missouri home she shared with her teenage daughter, Gypsy Rose.

As the details surrounding the murder came out, it was revealed that Blanchard had falsely convinced Gypsy Rose and everyone they knew — including doctors — that Gypsy Rose was seriously ill and needed to use a wheelchair. After her death, Blanchard was posthumously diagnosed with Munchausen syndrome by proxy, a mental health disorder in which a person makes up or causes illness in a person under their care.

Actor Patricia Arquette, who plays Blanchard in the new Hulu series The Act, says it was "very weird" to get into the character's head: "I had to kind of think of who Dee Dee was outside of all of those judgments people had after the fact."

Arquette sees Munchausen syndrome by proxy as a sign of "toxic codependency," in which a parent feels the need to care for a child to an extreme degree.

"We all have natural instincts as parents. When something's wrong with our kid, we think we have an instinct of what it might be," Arquette says. "I think Dee Dee has all these things in excess and in dangerous amounts."

Arquette has taken on a series of complex roles in the past few years. In 2019, she won a Golden Globe award for her portrayal of civilian prison worker Joyce "Tilly" Mitchell in the Showtime series Escape at Dannemora. And in 2015 she won an Academy Award for her role as a single mother in Richard Linklater's film Boyhood.

I think that it's really under-studied and a lot is not known about it at this point. Part of my research was looking at what doctors were saying about Munchausen by proxy. Oftentimes people, when they were children themselves, they were ill, and they got attention when they were ill. ... That's how they got some of their needs met. So that's part of it. Also, the parents sometimes are using it for their own personal need for attention, or to raise money, or a combination of those [things].

On her role as a civilian prison worker who enables a prison break in the Showtime series Escape at Dannemora, which is based on a true story

Conceptually, as a woman, I was really excited to explore this middle-aged woman being a sexual being, and being really comfortable with her body and being sexual — in her sexuality, being in her body completely, which is so different than me, because I've grown up in this Hollywood structure that's always telling you, "You're not right no matter what the hell you look like. No matter how young and beautiful you are, you're not beautiful enough, and there's always something wrong with your body, and there's always something wrong with the way you look." So the idea to play a middle-aged woman who is unapologetic about her sexuality was very exciting to me.

My mom was Jewish, and my dad was Muslim, and I went to Catholic school, and I wanted to be a nun, and at one point my brother was Buddhist. My parents believed there was only one God, and that really we all had the right as people to decide spiritually what our own paths were. ... We were raised to really respect all religions and all peaceful people — people [that] love God and even people that don't love God. We were raised to have a lot of tolerance for religious differences.

On her father's conversion to Islam

At one point my dad said, "You know what? I'm going to convert to Judaism." And [my mom] said, "Oh that's great." And so he went to go convert, and he got lost, and he came home, and he said, "Hey, I have something to tell you. I converted to Islam today." She said, "Only you! You've got to be kidding me." ... He said, "You know, I got lost, and I ended up at this mosque, and I went in to ask for directions, and I ended up talking to the imam. And then we got into a really deep conversation about religion and it really felt right. And so that's what I did."

On walking away from a role early in her career, shortly after giving birth to her first child

The premise [of the project] is that there is a camera in a closet, and this guy secretly tapes women he's with. ... I said [to the director], "Well what do you want to see?" Meanwhile, I'm breastfeeding, you know? So I was feeling pretty vulnerable. He was like, "I don't know, I just want you to sign something saying you'll do whatever we want." I was like, "I can't sign something saying I'll do whatever you want. What do you want to see? This camera's not moving around; it's in a closet. What exactly do you want to see?" And he said he wouldn't work that way.

And so, even though I was broke and I had a baby, I had to walk away from that job. I had to say, "Well, I can't do your job, then, because I don't feel comfortable just signing something saying I'll do whatever you want with my naked body." It sucked that I was a poor mom with a little baby at home, and this director just didn't know what the hell he wanted. And couldn't be just a human being about it.

On learning that her sibling was transgender

At the time, I think it freaked me out ... the world that [Alexis] was going to be having to deal with — all the bigotry and the danger that she might encounter. We were incredibly close, and we had really deep conversations about it. [Alexis died in 2016.] And I was so grateful that Alexis taught me so much about opening my heart and understanding things that I didn't really understand from my own experience. We'd already lost a lot of our family by that point. And a part of me realized: I don't know what shape or body anyone comes in with, but I love you, and I trust you. I don't know what it feels like to be trans, but I trust you.

But there were a lot of feelings, and I think Alexis was tough enough to work it through with all of us, and let us have our feelings, and our questions, and our fears, and our concerns, and even things that were probably not the greatest. Alexis was really down for us having that whole process and conversation. ... It took a while for me. It was [my sister] Rosanna who was like, "Oh, she's like a butterfly. It's just a transition, you know?" And that was really beautiful.

Lauren Krenzel and Seth Kelley produced and edited this interview for broadcast. Bridget Bentz, Seth Kelley and Beth Novey adapted it for the Web.