Accessibility links
Rod Rosenstein, Face Of Russia Probe, Steps Down As Deputy Attorney General The departure of the Justice Department's number two leader has been expected for months. Rosenstein has described himself as someone dealt a bad hand, one he played the best he could. 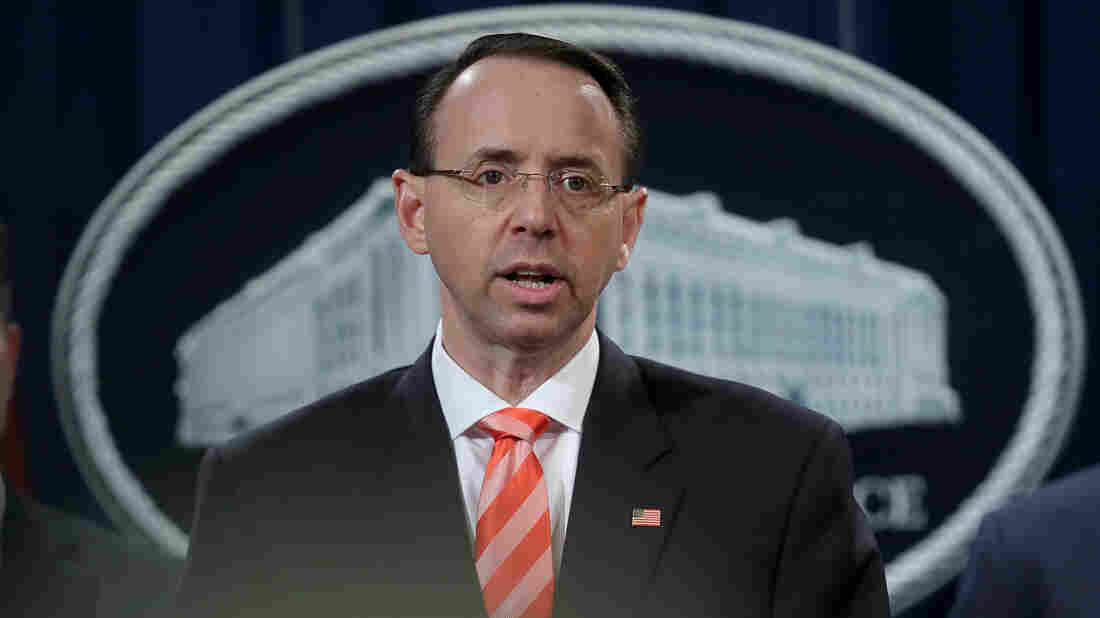 Deputy Attorney General Rod Rosenstein had been the public face of the investigation into Russian attacks on the 2016 election. Win McNamee/Getty Images hide caption 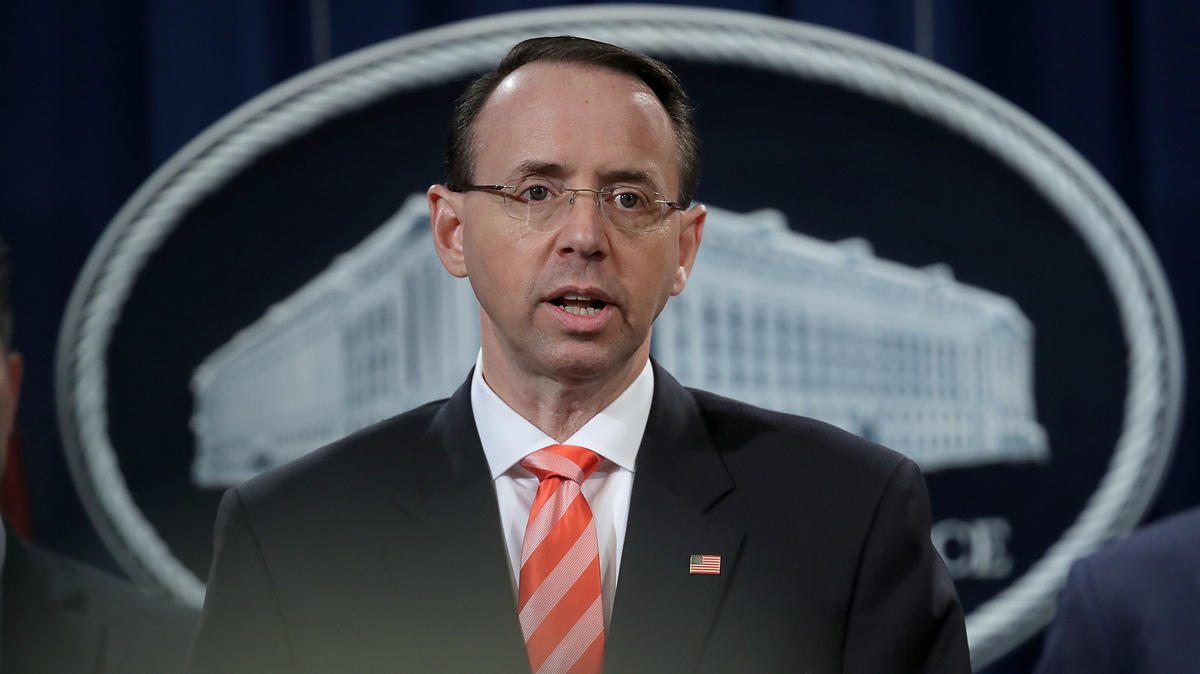 Deputy Attorney General Rod Rosenstein had been the public face of the investigation into Russian attacks on the 2016 election.

Deputy Attorney General Rod Rosenstein, who appointed a special counsel to investigate Russian election interference — a move that enraged President Trump — confirmed on Monday that he is stepping down from his post at the Justice Department.

Rosenstein submitted a letter to Trump that said his resignation will be effective on May 11, likely after the Senate has confirmed the man nominated to replace him, Jeffrey Rosen.

Rosenstein's letter defended the independence of the Justice Department and adopted a theme he has been using in speeches over the past few weeks: He was put in a position of having had to make tough calls but argues he made the right ones.

"We enforce the law without fear or favor because credible evidence is not partisan, and truth is not determined by opinion polls," Rosenstein wrote. "We ignore fleeting distractions and focus our attention on the things that matter, because a republic that endures is not governed by the news cycle."

Rosenstein's fate has been clear since a blockbuster story in The New York Times described discussions early in Rosenstein's tenure about potentially removing or secretly recording Trump — something Rosenstein said he never actually authorized.

Nonetheless, the deputy attorney general was embarrassed and expected to be fired, sources at the Justice Department said.

Instead, Trump kept Rosenstein on but passed him over, twice.

When Trump forced out then-Attorney General Jeff Sessions, he appointed Sessions' chief of staff as acting attorney general, not Rosenstein, the Senate-confirmed deputy.

And when Trump decided to nominate a permanent replacement for Sessions, he looked outside the administration and asked former Attorney General William Barr to return. Barr took his oath of office on Valentine's Day.

As the new leader of the Justice Department, Barr was entitled to select his own deputy. He and Trump nominated Rosen, leaving no room for Rosenstein.

The face in place of the special counsel

Rosenstein has been a central figure in the story of the Trump presidency almost since the day he was confirmed by the Senate in the spring of 2017.

He was involved in developing the administration's casus belli against then-FBI Director James Comey, whom Trump fired in May of that year.

Rosenstein then appointed former FBI Director Robert Mueller as special counsel to continue the FBI's investigation into the Russian government's attack on the 2016 presidential election and whether anyone in Trump's campaign conspired with it.

Mueller concluded his work without charging anyone with conspiring with the Russian interference. Trump called the investigation a "hoax" and blasted the Justice Department — and Rosenstein.

The investigation did result in a slew of guilty pleas and indictments, including against more than two dozen Russians charged with interfering in the 2016 election.

Trump's former campaign chairman Paul Manafort was found guilty of several charges in one federal trial in Alexandria, Va., and sentenced to nearly four years in prison and almost $25 million in restitution.

Manafort pleaded guilty to avoid a second trial in a separate case in Washington, D.C., and ultimately received a total sentence of more than seven years in prison.

All along, Rosenstein was the public face of the investigation in place of a reticent, seldom-seen Mueller.

The investigation drew close to Trump himself; the president's former longtime personal lawyer and fixer, Michael Cohen, pleaded guilty to federal charges in New York City in August 2018 in a prosecution being handled by local U.S. attorneys in Manhattan.

Cohen's plea directly implicated Trump. Cohen said Trump had directed him to arrange payments to two women before Election Day 2016 to keep them quiet about sexual relationships they said they had with Trump.

Cohen was sentenced to three years in prison.

The president has acknowledged the payment to one of the women but denied the underlying claims of extramarital liaisons dating back more than a decade. Trump also said he disagreed that Cohen's actions amounted to a violation of the law. 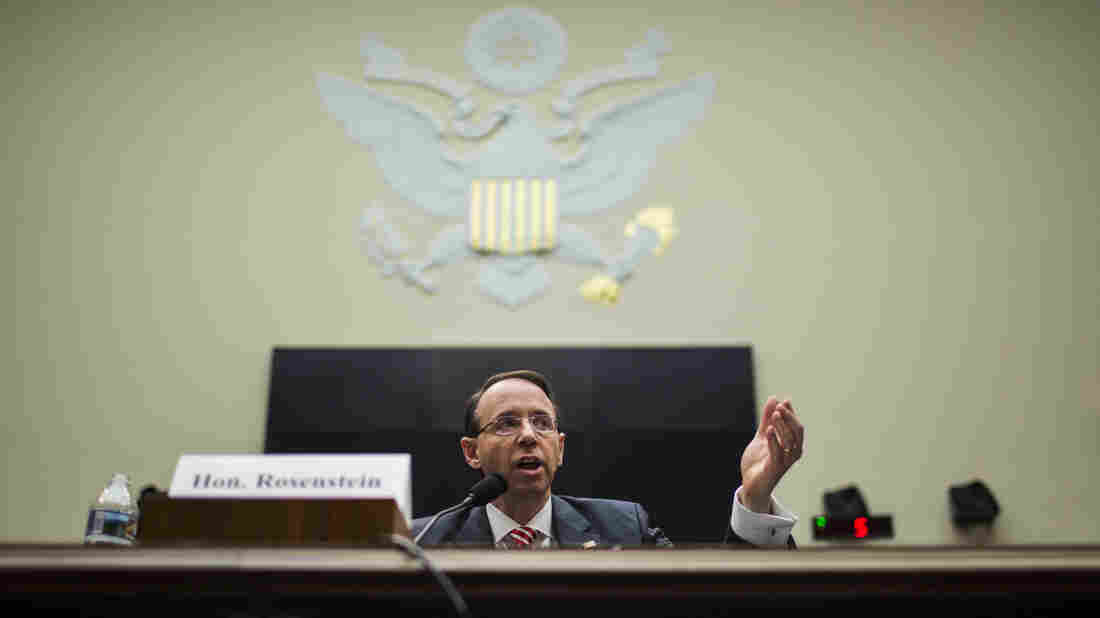 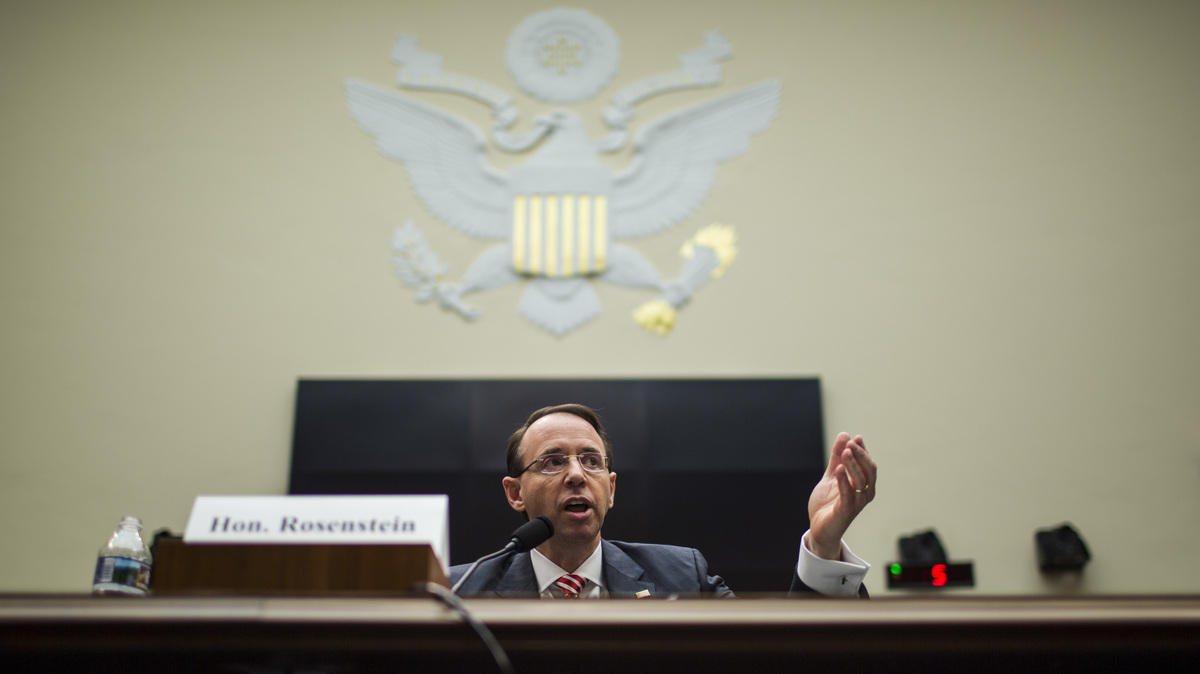 Rosenstein testifies at a House Judiciary Committee hearing in December 2017, during which he defended Robert Mueller.

A confidential source; a documents battle; a NYT report

Rosenstein also was pummeled by House Republicans who accused the Justice Department of abusing its authority and conspiring to hurt the president.

No amount of testimony nor any amount of what DOJ called its good-faith work producing documents ever proved enough for Rosenstein's critics in the Congress — or, it appeared, for Trump.

The president and his GOP allies blasted Rosenstein for what they called stonewalling over, among other things, records associated with the FBI's conduct in the early phase of the Russia investigation.

News reports, for example, revealed that the FBI had asked a confidential informant to meet with Trump campaign aides in 2016 to try to find out about their contacts with foreign governments.

Trump called that evidence of improper political snooping by the Obama administration and sided with Republican committee chairmen in Congress who were demanding that Rosenstein give them top secret documents about the Russia probe.

Rosenstein, who had been resisting, began giving ground. He maintained, however, that the FBI and Justice Department had done nothing wrong and that they were working as quickly as they could to give their interlocutors on Capitol Hill everything they had requested.

The political situation worsened for Rosenstein in September 2018 when the Times reported that early in his tenure, he had discussed secretly recording Trump around the time of Mueller's appointment.

Former FBI Deputy Director Andrew McCabe later explained in a book that he and Rosenstein and other leaders were in shock after Comey's ouster and struggled with how to respond. That was why McCabe opened obstruction of justice and counterintelligence investigations into Trump and why he said he spoke with Rosenstein about potentially trying to secretly record Trump.

Ultimately, McCabe said, the FBI concluded it shouldn't try to surreptitiously record Trump and so it never asked Rosenstein to authorize that.

Rosenstein expected to be dropped from the administration when the Times reported those events. He met with Trump to get it over with. Instead, the president granted him a reprieve, but it became clear that the deputy attorney general's time was limited.

In an administration noted for brief tenures and hasty departures, Rosenstein lasted just over two years after the Senate voted 94-6 to make him second-in-command to the now-ousted Sessions.

Earlier in his career, Rosenstein had been one of the government's longest-serving U.S. attorneys, fighting violent crime and corruption for more than a decade in Maryland. He served in both Republican and Democratic presidential administrations.

And Rosenstein sought to execute as many of the administration's priorities as he could even as he was overseeing Mueller's office.

Rosenstein was involved with the push against opioid abuse and announced the formulation of a new counterdrug "strike force"; he announced a high-level prosecution against Chinese hackers charged with stealing American and international trade secrets.

Month after month, however, Trump attacked Rosenstein on Twitter and in public statements, accusing him without evidence of having conflicts in the Russia investigation, of being a Democrat — Rosenstein is a Republican — and of other alleged misdeeds.

"I have this witch hunt constantly going on for over 12 months now," Trump told reporters in April 2018, adding, "It's, frankly, a real disgrace. It's an attack on our country in a true sense."

McCabe's 'The Threat' May Be Darkest Vision Of Trump Presidency Yet

Rosenstein largely responded by carrying out the wide-ranging responsibilities of his job at the Justice Department, which included day-to-day management of more than 100,000 lawyers, support staff and other employees.

He also threw his support behind Mueller and the Russia probe, telling lawmakers that the investigation was being conducted professionally and that there was no "good cause" to remove Mueller from his post.

Rosenstein said that he was supervising the special counsel's office closely and that Mueller was not some buccaneer running a pirate ship, as he was sometimes characterized.

"I believe based on his reputation, his service, his patriotism and his experience with the department and with the FBI, he was an ideal choice for this task," Rosenstein told the House Judiciary Committee in December 2017. 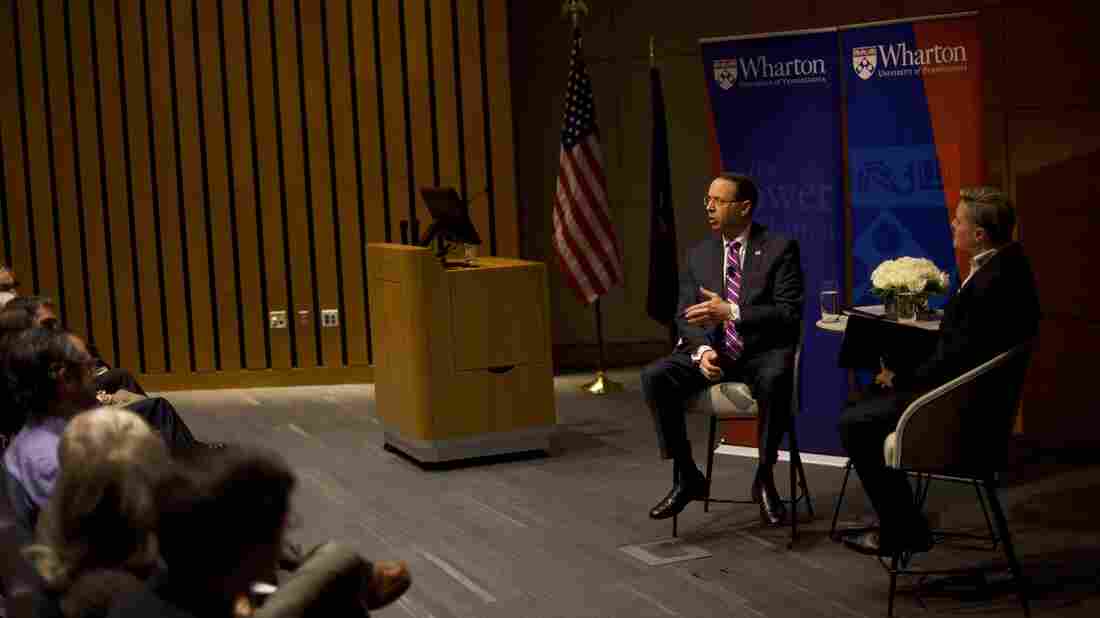 During a speech at the Wharton School of the University of Pennsylvania in Philadelphia, Rosenstein talked about the duty of government lawyers to do their jobs even if it incurs criticism. Mark Makela/Getty Images hide caption 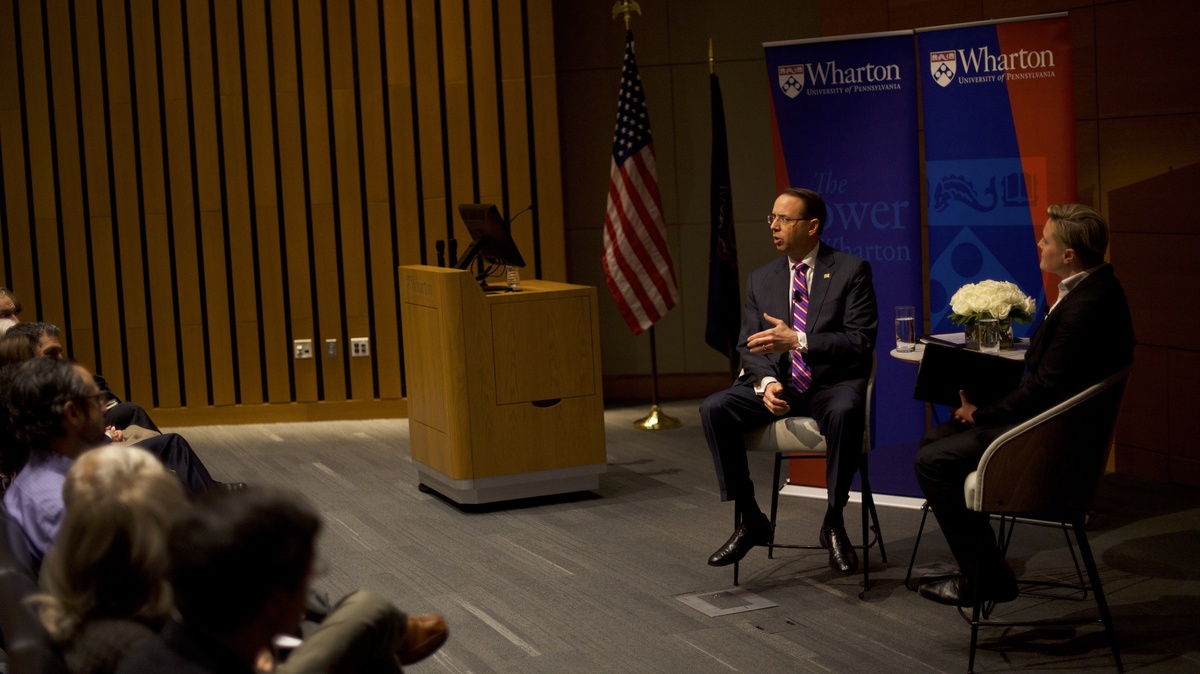 During a speech at the Wharton School of the University of Pennsylvania in Philadelphia, Rosenstein talked about the duty of government lawyers to do their jobs even if it incurs criticism.

"I kept the faith; I followed the rules"

As the chief overseer of Mueller, Rosenstein had the authority to approve changes to the mandate of the investigation, the Justice Department and FBI resources Mueller sought and other key steps along the way.

Rosenstein also signed an application to reauthorize an ongoing warrant to conduct surveillance on a onetime Trump campaign foreign policy aide, Carter Page. That undercut charges by Trump and supporters that the Russia probe was a partisan frame-up being perpetuated by holdovers from the Obama administration.

Rosenstein's support for the warrant, along with the support offered by his acting predecessor, Dana Boente, showed that even Trump-era appointees saw the value in the surveillance.

To continue such activity, investigators must show their work is yielding worthwhile information, and the presence of Boente's and Rosenstein's signatures showed that the FBI continued to do just that in its surveillance of Page, even after Trump had been inaugurated and his nominees had taken over.

For Trump and his allies, however, Rosenstein's signature on the document put him in the enemy camp, and they grouped him with the "biased" conspirators they said were perpetuating what they called the hounding of the president.

Rosenstein told an audience in late February that he viewed the pursuit of his duties as worth the opprobrium he endured.

"In 1940, Attorney General Robert Jackson explained that government lawyers 'must at times risk ourselves and our records to defend our legal processes from discredit, and to maintain a dispassionate, disinterested, and impartial enforcement of the law,' even if it requires us to incur criticism," Rosenstein said.

He told an audience at the Wharton School in Philadelphia that he believed he met that standard. "I took more than my fair share of criticism," he said. "But I kept the faith; I followed the rules; and I left my office in good hands. Those are the things that matter."