Accessibility links
Libya's Capital Hit By Rockets And Mortar Shells Nearly Every Day, Civilians Say The Tripoli office of the International Committee of the Red Cross says, "Densely populated residential areas are gradually turning into battlefields." The city has been under attack since April 4.

'I Don't Know Where I Will Be The Next Minute — Dead Or Alive': The View From Tripoli

'I Don't Know Where I Will Be The Next Minute — Dead Or Alive': The View From Tripoli 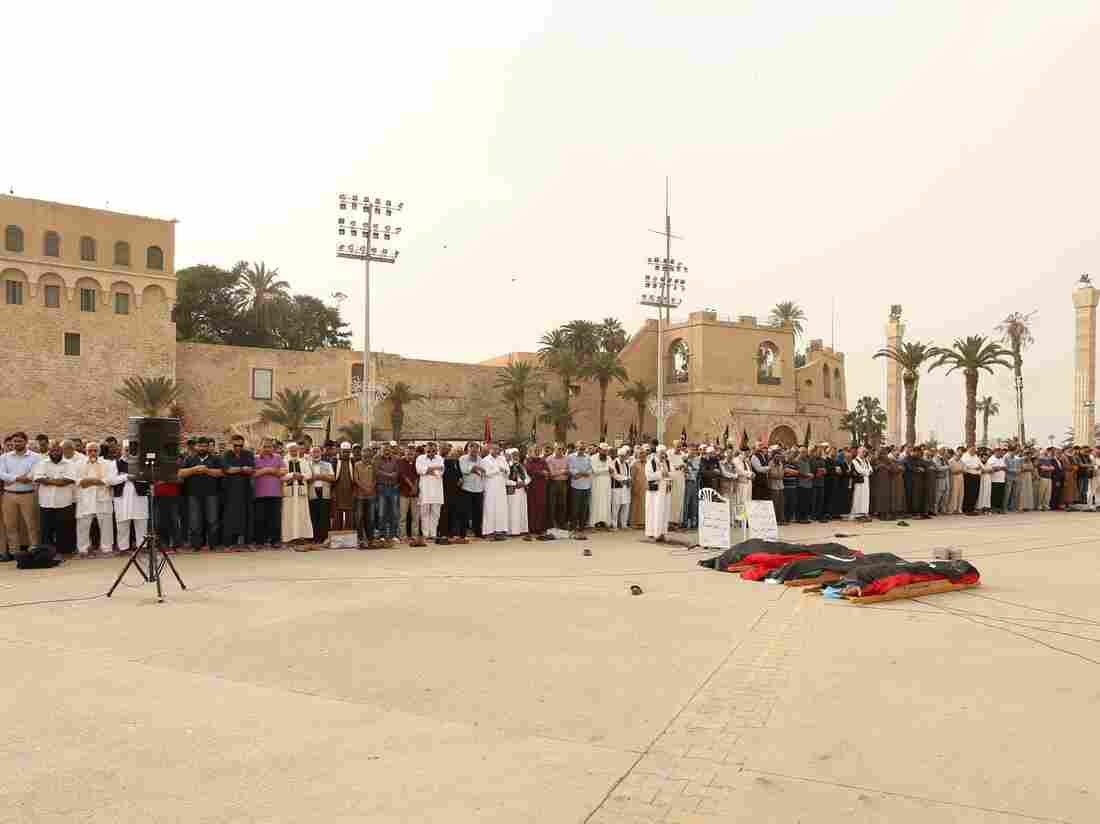 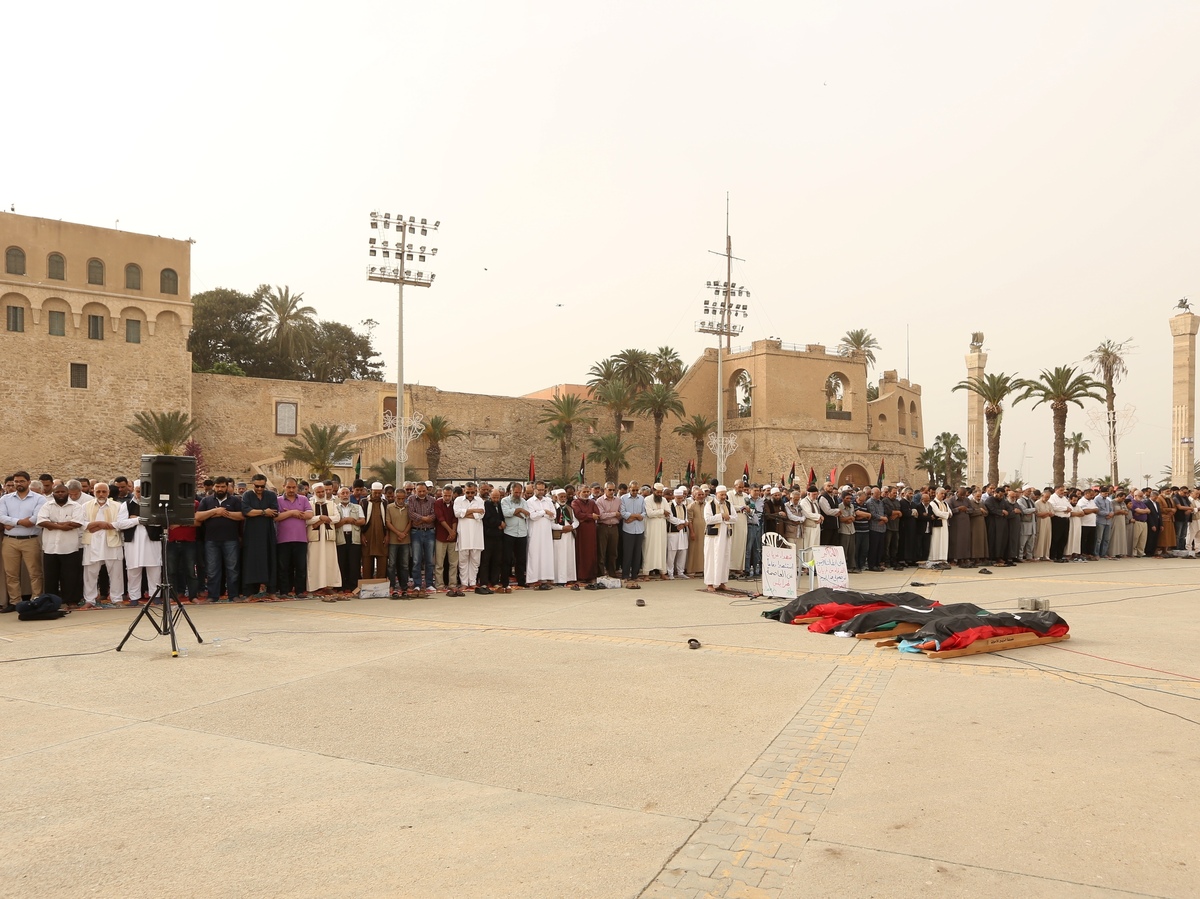 Mourners gather for funeral prayers for fighters killed by warplanes of Khalifa Haftar's forces on April 24 in Tripoli, Libya.

Huda, a 60-year-old high school teacher in Tripoli, has just finished her last day teaching English literature at an international school in the Libyan capital. Speaking by phone from her now-empty classroom, she tells NPR that the school year had to wrap up early because of the intensity of fighting between pro- and anti-government forces.

Exams were interrupted by sounds of shelling and nearby explosions. Some of her students screamed in fear, but many, she says, were not afraid. They are children of war, she explains. They were 8 or 9 years old when Libya's 2011 revolution took place, and they've become desensitized to the bombs.

"Us adults are more afraid," Huda says. Because of safety concerns, she does not want her surname used. "I've been living my life not on a day-to-day basis but on a minute-per-minute basis. Between getting into my car, driving to work and coming home, I don't know where I will be the next minute — dead or alive."

On April 4, Khalifa Haftar, the 75-year-old renegade military leader who has controlled much of eastern Libya since 2015, launched an attack to seize Tripoli from the United Nations-recognized government of Prime Minister Fayez al-Sarraj.

The U.N. has reported "indiscriminate shelling of civilian areas in Tripoli." Rockets and mortar shells are hitting heavily populated neighborhoods on a nearly daily basis, according to civilians who spoke with NPR. They also report drones hovering in the skies and airstrikes.

Libya has struggled for stability since the overthrow of Moammar Gadhafi in 2011. Sarraj's government came to power in 2016 following a series of U.N. dialogues, but Haftar and his allied militias have refused to acknowledge it. The government includes a loose collection of militias, each controlling a different part of the country. There is no national military force. 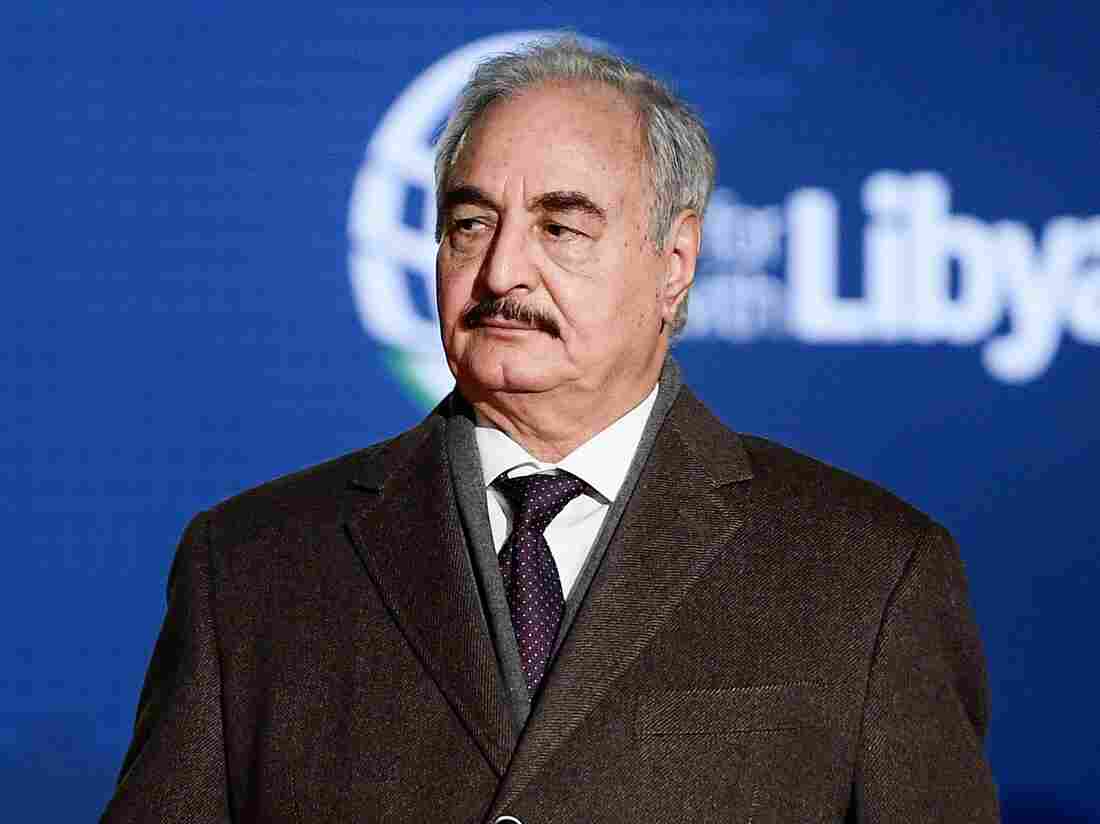 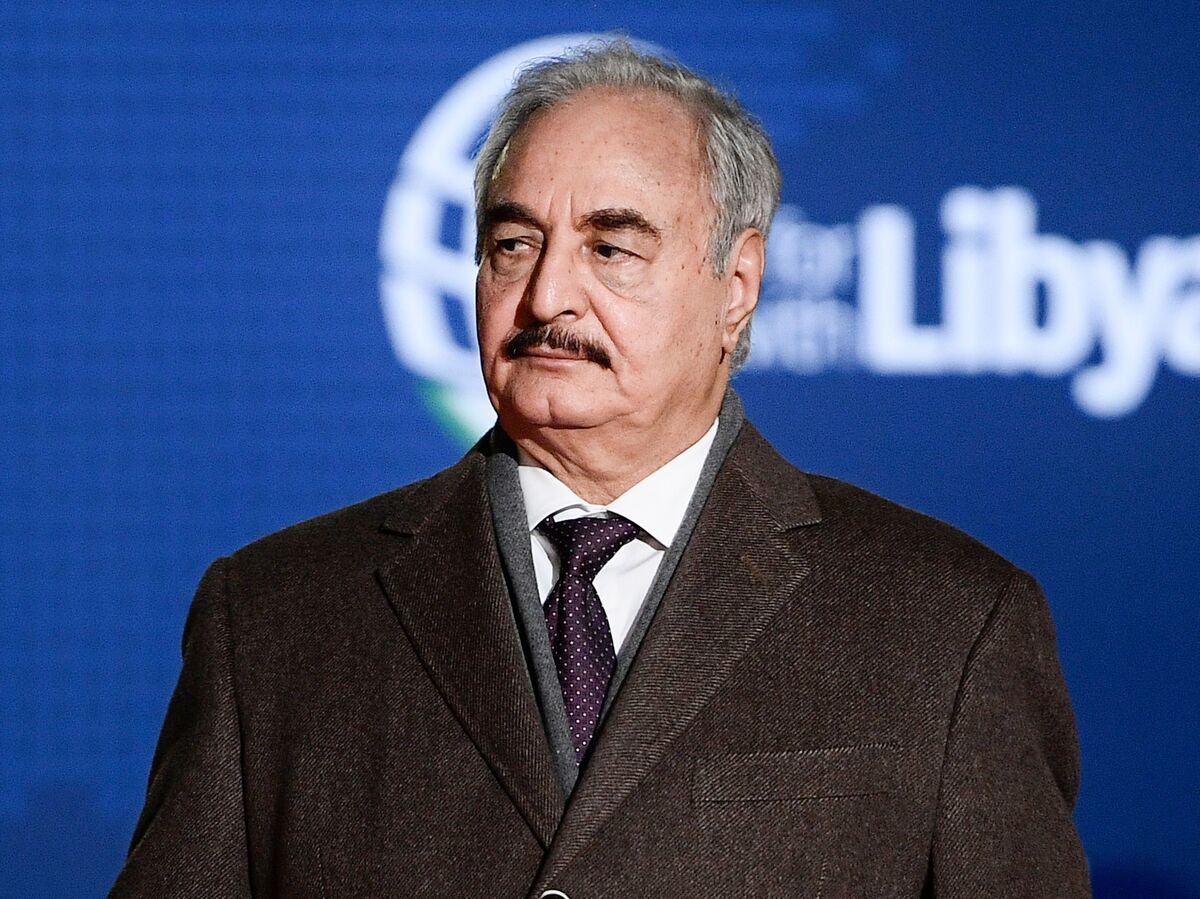 Khalifa Haftar, shown here in November 2018, launched an attack this month to seize Tripoli from the United Nations-recognized government led by Fayez al-Sarraj.

Haftar and the militias allied with him claim that Tripoli is run by terrorists, gangs and extremist militias, and they say that therefore he must lead a fight for liberation.

Since April 4, hundreds of people have gathered in Tripoli's central Martyrs Square to protest Haftar and his rhetoric.

"This is so dangerous, because he views us all as terrorists. We are not terrorists, and we are fighting for our lives. If he comes in, it will truly be a massacre. This is how people in the streets feel," Amina, a friend of Huda's, tells NPR. Amina, whose fears for safety mean she does not want her surname used, runs an import company with her children.

The U.N. migration agency, IOM, reports that over 39,000 residents of Tripoli have been forced to evacuate their houses and move to safer areas.

Over the past few weeks, Huda says, she has "attended too many funerals." She tells NPR that people in Tripoli are trying to go about their daily lives as usual, attending tea parties, running errands, planning weddings. But once they hear the sound of bombs, she says, they have no place to run.

"Most people in Tripoli don't have any basements," she says, "so our houses start shaking, my grandkids start to cry and I just feel helpless. I become numb. Random shelling is something that I don't want even an enemy to go through."

The Tripoli office head of the International Committee of the Red Cross said on April 25 that "densely populated residential areas are gradually turning into battlefields." Fighting has killed at least 264 people and injured over 1,200 others, according to a World Health Organization spokesperson.

Although Libya is an oil-rich country, the political divisions have helped create what feels like a "never-ending" cash crisis, Tripoli residents tell NPR.

There are long lines at banks, and people find it almost impossible to withdraw money from ATMs, which residents say have almost become "decorative" around the capital. The banks are run and controlled by the Central Bank of Libya and are secured by different militias.

Huda says she isn't allowed to see how much money she has in the bank. "We are given these debit cards with limits on them from the banks, and we cannot go over," she says. "That's how we're living at the moment."

The country's lack of stability and high inflation rates helped lead to a collapse in deposits.

"The banks had a cash problem because the people didn't want to use them, and they ran out of cash," Amina says. "People were playing the black market and became very rich doing so, at the expense of the economy."

The U.N. envoy for Libya has warned against an attempted power grab by Haftar. But Haftar has support from regional powers, including the United Arab Emirates and Egypt. A U.N. panel of experts' report from 2017 claims that the UAE has been violating an arms embargo, gave Haftar's troops aircraft and military vehicles and also helped build an air base in al-Khadim, in northeastern Libya.

This month, Gen. Abdel-Salam al-Hassi, a spokesman for Haftar, said that allied countries have been conducting "friendly air raids" against forces loyal to Sarraj's internationally recognized government in Tripoli.

On April 7, U.S. Secretary of State Mike Pompeo said the U.S. opposed Haftar's attacks. "We have made clear that we oppose the military offensive by Khalifa Haftar's forces and urge the immediate halt to these military operations against the Libyan capital," he said.

But in a subsequent phone call with Haftar, President Trump "recognized Field Marshal Haftar's significant role in fighting terrorism and securing Libya's oil resources, and the two discussed a shared vision for Libya's transition to a stable, democratic political system," according to a White House statement.

The Tripoli government accuses France of supporting Haftar and has stopped all cooperation with Paris. France denies these accusations but halted an EU call to stop Haftar's offensive in Libya.

The U.N. has been trying to lead reconciliation talks between Sarraj and Haftar, attempting to create a single unity government. Some analysts have questioned how effective the talks can be, given that they have been hosted by the UAE.

"The U.N. should not have allowed for a political dialogue and deal to be conducted through the UAE," says Anas El Gomati, general director of the Sadeq Institute, a Libyan think tank. The UAE, he says, "can't possibly support the military state-building ambitions of Haftar and the civilian state aspired to by Sarraj. This should've been held in neutral ground."

Gomati says many Libyans simply don't trust Haftar because of his 50-year track record as a "serial defector."

Gomati says Haftar reconciled with Gadhafi in 2004 but then reneged in 2011 to join the revolution against the longtime leader.

"During the revolution, Haftar bombed the first elected parliament that came from the revolution in 2014, launched two coups in the space of three months in 2014," Gomati says.

Libyans in Tripoli tell NPR they do not believe that Haftar has earned the right to be their leader.

"If Haftar wanted to unite his country and people, he should've used the money he received from the Gulf to rebuild Benghazi. Instead, he just destroys everything. And now he will just destroy Tripoli," Huda says. "It will be hell all over again. Tripoli has been through a lot. We don't see anything hopeful. What are we going to be leaving behind for these generations? Nothing."