Accessibility links
President Trump's Foxconn Promise, So Far Unfulfilled President Trump heralded Foxconn's plan to build a big plant near Milwaukee, eventually creating 13,000 jobs. But the project has stalled and been downsized and is again in the political crosshairs. 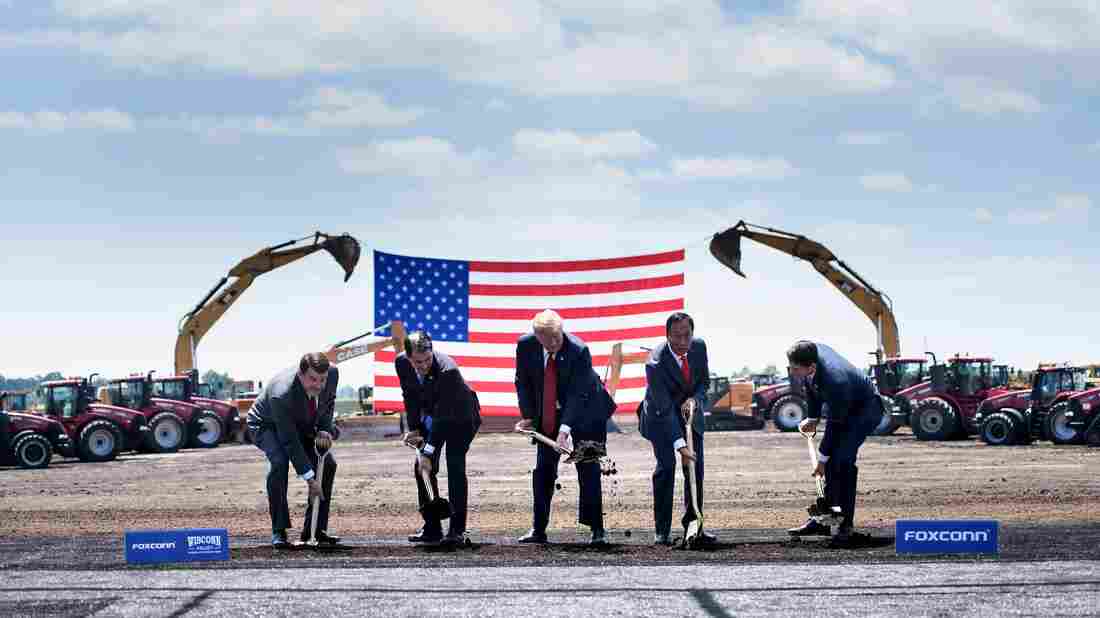 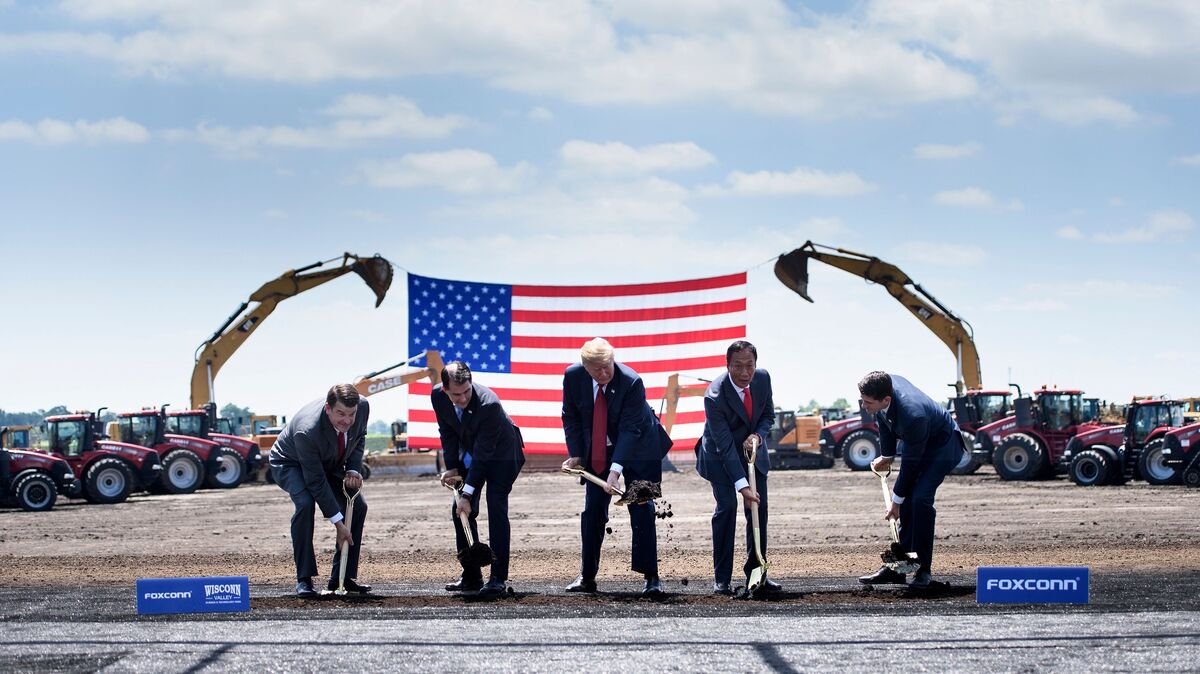 President Trump participates in a groundbreaking for the Foxconn campus in Mount Pleasant, Wis., in June 2018. With him are Christopher "Tank" Murdock (from left), the first Wisconsin Foxconn employee; former Gov. Scott Walker, Foxconn Chairman Terry Gou and former Speaker of the House Paul Ryan.

Nearly two years ago, President Trump stood in the East Room of the White House and announced that Taiwan-based Foxconn — a major supplier of Apple technology — was going to build its first U.S. manufacturing facility, outside Milwaukee.

"This is a great day for American workers, and manufacturers, and for everyone who believes in the concept, and the label, 'Made in the USA,' " the president boasted.

But last summer, the agreement with Foxconn started to crack. The company first said it would reduce the size of the LCD display screens it would make, meaning fewer promised manufacturing jobs. And Wisconsin's Republican Gov. Scott Walker, who had enticed the company with up to $3 billion in state tax credits, lost his reelection bid.

Then, over the winter, another shocker — the company said it might not build a manufacturing plant after all. Trump hurriedly intervened, and within days he got Foxconn to recommit to building the facility, he says.

The company says it is in early phases of construction of the advanced manufacturing plant. But the project has gone through so many changes that nearly everyone involved with it has more questions than answers. Wisconsin's new Democratic governor, Tony Evers, says he doubts Foxconn will ever create the 13,000 jobs that were promised by 2032.

"I truly believe that they believe at some point in time they'll have 13,000 employees here. I'm not sure about that. It's a smaller footprint. It's a different type of job," Evers told news reporters in Milwaukee last week. "But we'll see. I mean, if they create 1,000 jobs, that's 1,000 jobs we didn't have." He added that Foxconn now wants to change its agreement with the state.

That same day, Foxconn's U.S. director of strategic initiatives, Alan Yeung, tweeted that people should "Calm down" about the job target. At a Milwaukee awards ceremony for innovative technology, he stressed that the company is still committed to making Wisconsin a global technology hub.

"So, I think we need to take a deep breath and say tax credits are important. But we don't make decision solely based on tax credits," Yeung told reporters.

There are unconfirmed reports that Terry Gou, the Foxconn chief, is heading to the White House for meetings this week. Foxconn officials also say they are ramping up building the manufacturing plant in Racine County. 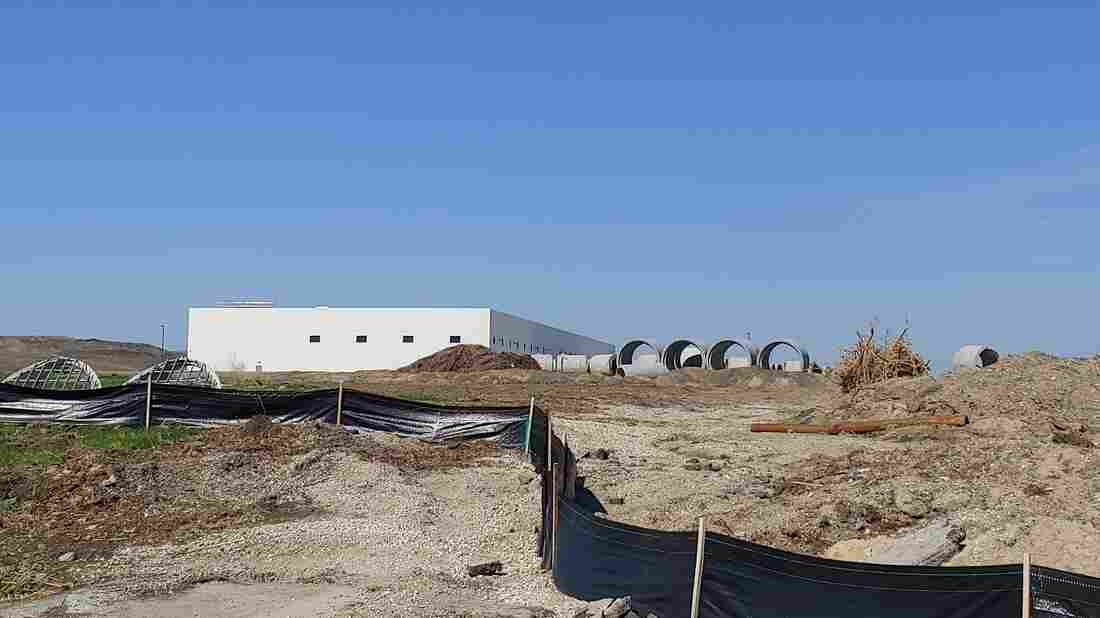 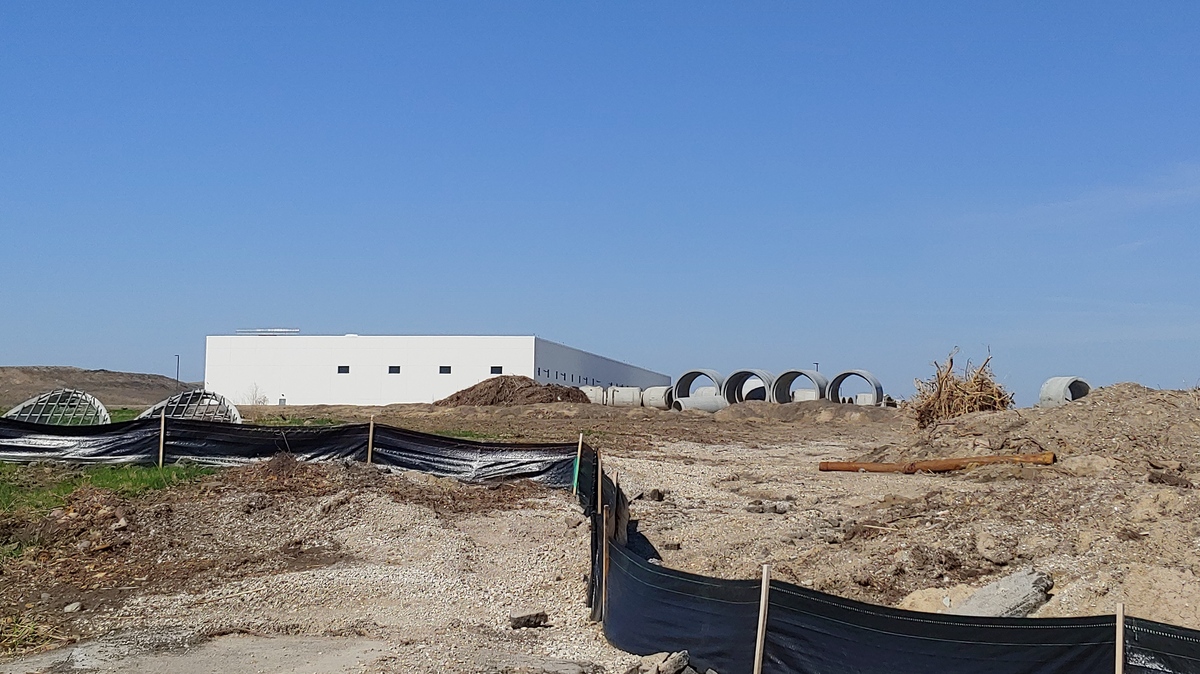 An existing Foxconn building on the new manufacturing property outside Milwaukee.

From the edge of the 1,200-acre Foxconn manufacturing property, an observer can see that the farms once on this land are gone. A lot of the ground is bare. Foxconn has put up only one building, what it calls a multipurpose structure. Earth movers, sometimes in groups of three or four, are hauling around piles of dirt.

Around the perimeter of the property, roads are being widened. Racine County Executive Jonathan Delagrave says he is happy with the pace of construction. "Look, you can see the transformation happening. And, it's really ... I think a great thing for us, " he said.

But some residents here remain skeptical that the jobs will ever come. Recently, Gou said he is scaling back his company duties as he runs for Taiwan's presidency. Resident Jeff Loken says that could be a problem. "He was the main pipeline for President Trump to get this agreement. So what happens now? Terry Gou isn't going to be in charge. Someone else is, presumably. Is he going to go along with the same thing?" Loken asked.

There's even uncertainty among Wisconsin business leaders who have supported Foxconn, like Tim Sheehy, the Metropolitan Milwaukee Association of Commerce president. Sheehy says it's time for some real benchmarks to be met. "That at some point this summer, the [manufacturing] building starts to go up, the capital equipment comes in and the jobs start to flow. Up until that point, everybody will be at some point of unease," he said.

It's that unease that has surrounded this ambitious plan from the very beginning.

Over the weekend, as Trump held a rally in Wisconsin, his campaign press secretary told the Milwaukee Journal Sentinel that she doesn't know why the state's governor isn't more "optimistic and hopeful" that Foxconn will bring the promised 13,000 jobs to the state. She encouraged him to work with the president and company to "make sure those jobs come here."

But with up to $3 billion in state tax credits on the table, officials and residents across Wisconsin are still looking for the jobs that money was supposed to lure.