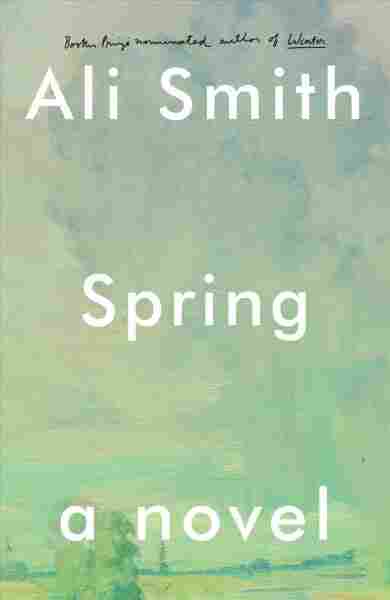 Among my favorite contemporary authors, Ali Smith leads the parade. I love the brassy blast of her outrage at the world's injustices and the drumbeat of her passion for the arts. This Scottish writer gravitates naturally to outsiders and really understands loss and grief. She takes a genuine interest in old people and what we can learn from them, but also sees hope for the future in smart young people. I love her clever wordplay, her insistence on the life-enhancing possibilities of love and decency, and her ability to compose artful literature that sings of both humanity's heart and heartbreaks.

All of these qualities are on abundant display in Spring, the third volume of Smith's seasonal quartet. While it's hard to top There but for the (2011) and How to be Both (2014), it looks like Smith may end up doing that with this remarkable project.

Produced at Dickensian speed if not length, with a Dickensian determination to weigh in on troubling current issues, we're up to season three with Spring, which (naturally) follows Autumn (2016) and Winter (2017). Each volume revolves around different characters, so it's fine to read them individually, or in no set order. But you'd risk missing the swell of Smith's moral fury and the deliciously subtle through-lines and connections she plants in each book.

Climate change, Brexit, privacy issues, and the alarming rise of right-wing nationalism are still on Smith's mind, but the main focus of Spring is the global migrant crisis and abhorrent treatment of refugees. "Don't be calling it migrant crisis," a dying octogenarian chastises her hard-hearted son. "I've told you a million times. It's people."

The dying woman is Patricia Heal, an Irish-born screenwriter known as Paddy to her longtime collaborator and soul mate, director Richard Lease (whom she calls Doubledick, after a Dickens character). Beginning in the early 1970s, the two made groundbreaking films together. One was Andy Hoffnung, a powerful TV drama about the far-reaching impact of the Holocaust. Its title character's name is derived from Beethoven's An die Hoffnung (Dedicated to Hope) -- a display of Smith's verbal felicity and her determination, also evident in Autumn, that we not forget the atrocities that white supremacists unleashed in the 20th century.

When we meet Richard in October, 2018, he's on a deserted train platform in northern Scotland. Devastated by Paddy's recent death, he movingly recollects his last visits with her. Yes, she ranted about "the new world tyrants" and "thugs all across the world." But they also bantered about mortality and riffed playfully on the lyrics of "Summertime": "Somatize and the living is easy."

Along with his memories, Richard is haunted by running commentary from an imaginary daughter who took up residence in his brain after he lost contact with his only child following his divorce in the late 1980s. "Come on, Mr. Drama," she prods. "You so-called king of the arts. What on earth are you doing? What are you doing on earth?" She urges him to "Wake yourself up, for Christ sake," and "do something that'll really honour [Paddy]." Finding that something is, in a nutshell, what this novel is about.

['Spring'] feels fresh even though Smith returns to so many of her familiar themes: the bleak contemporary political landscape, loss of a soul mate, fractured families, nature's seasonal clockwork, and references to a real artist.

Interspersed with Richard's story is a disturbing tale of wasted lives. Smart but unable to afford college, Brittany Hall takes a job as a Detainee Custody Officer at an Immigration Removal Centre. A prison by another name, it's "a kind of underworld" and "place of the living dead." Smith's focus is not on the detainees but the detainers, and how the situation dehumanizes both. Brittany quickly learns the ropes, including "How to say without thinking much about it ... We're not a hotel. If you don't like it here go home. How dare you ask for a blanket."

A quixotic mission to accompany an unusual, mixed-race 12-year-old foster child up to northern Scotland for reasons the girl won't reveal raises hopes that Brittany will escape from this terrible, dehumanizing job with her integrity intact and a sense of better options. Witty conversational parrying between Brittany and Florence — the latest preternaturally bright Salinger-esque child to provide uplift in Smith's fiction — makes Brittany feel clever for the first time in years. But when she finally realizes what Florence is up to, the consequences are heartbreaking.

Spring uncoils strikingly, like a vernal fern. It feels fresh even though Smith returns to so many of her familiar themes: the bleak contemporary political landscape, loss of a soul mate, fractured families, nature's seasonal clockwork, and references to a real artist (Tacita Dean this time) and a Shakespeare play (Pericles of Tyre, or as Richard quips, Pericles of Tired). Postcards crop up in this book like signposts, no mere ephemera. The initially puzzling inclusion of off-putting anti-immigrant rants will become clear with time. About such bloviating, Smith reminds us: "Hot air rises and can not just carry us but help us rise above." So can her novels.