Accessibility links
Trump Calls For Asylum-Seekers To Pay Fees, Proposing New Restrictions The president called for measures to close what he calls the asylum "loophole" amid a spike in border crossings. Critics say the proposal is an attack on vulnerable migrants. 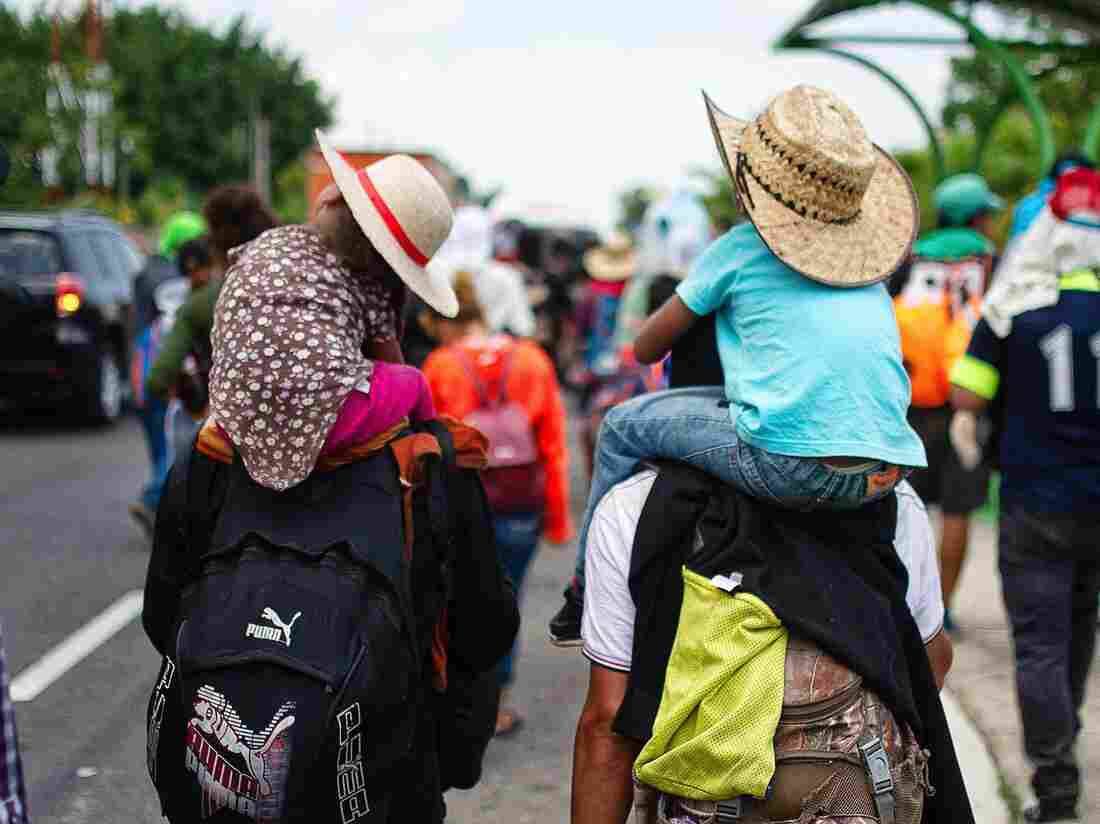 Children are carried on the shoulders of Central American migrants heading to the U.S. along the road between Metapa and Tapachula, Mexico, on April 12. President Trump has called for measures to close what he calls the asylum "loophole" amid a spike in border crossings. Pep Companys/AFP/Getty Images hide caption 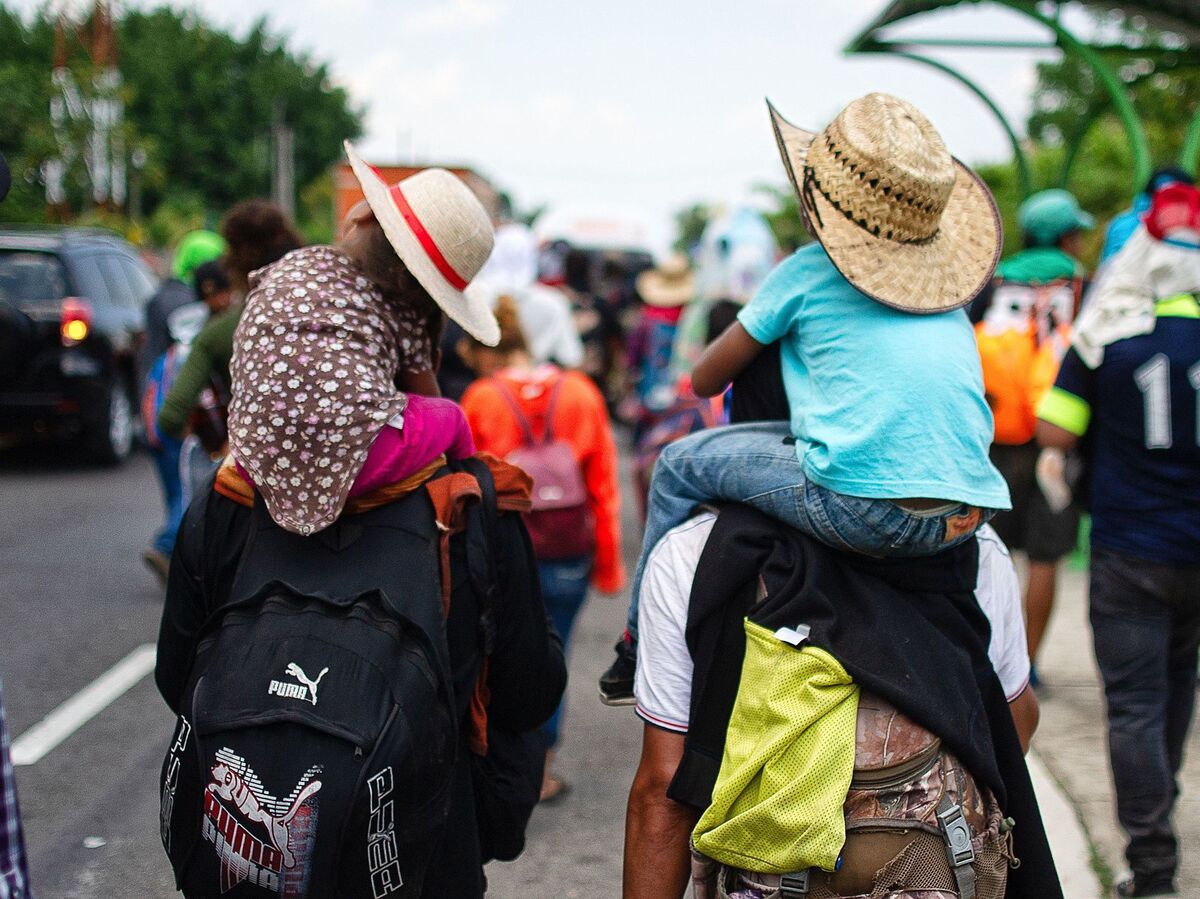 Children are carried on the shoulders of Central American migrants heading to the U.S. along the road between Metapa and Tapachula, Mexico, on April 12. President Trump has called for measures to close what he calls the asylum "loophole" amid a spike in border crossings.

President Trump is calling for his administration to restrict the asylum process, issuing a presidential memorandum that proposes charging asylum-seekers fees and other broad changes.

Trump's proposals were widely criticized by Democrats and immigration advocates, who predicted a new legal battle over the president's policy.

"Seeking asylum is a right under U.S. and international law — not a privilege to pay for," said Rep. Raul Grijalva of Arizona.

In the memo, Trump said he is giving Attorney General William Barr and acting Homeland Security Secretary Kevin McAleenan 90 days to propose new regulations to speed up the processing of asylum claims, charge application fees for those seeking asylum, and to bar work authorization for certain applicants.

Issued Monday evening, the memo also calls on Homeland Security personnel to "improve the integrity" of credible fear determinations, and to prioritize the deportation of immigrants who have received final orders of removal.

Trump often mocks the asylum system, calling it a "loophole" that attracts immigrants to the U.S. This memo is the Trump administration's latest effort to make it harder for migrants to stay in the country, and it comes amid a spike in border crossings, including a large number of families seeking asylum.

Trump derided the current immigration laws as "weak, ineffective and dangerous," but he has made little effort to work with Congress to change them.

In response to Trump's proposals, immigrants' rights advocates said they found the idea of charging asylum-seekers fees to process their applications to be particularly egregious.

"[T]he idea that we will charge asylum seekers a fee to seek refuge from persecution, torture, or death is offensive and counter to our values," the American Civil Liberties Union tweeted.

The Immigration and Nationality Act already includes a provision that permits the U.S. to impose fees on foreign nationals seeking asylum or work authorization. But critics say such fees may be impossible for many asylum-seekers to pay, unless financial waivers are granted liberally.

Melissa Crow, senior supervising attorney at the Southern Poverty Law Center, says the memorandum is another in a string of the Trump administration's attacks on vulnerable asylum-seekers. "We've seen it over and over again, from turning away asylum-seekers at ports of entry, to trying to make those who enter between ports of entry ineligible for asylum, and most recently until now, sending asylum-seekers back to Mexico to wait for their court hearings," she says. "The Trump administration has had their hand slapped numerous times by the courts, and I suspect that this time will be no different."

It's too soon to tell exactly how the proposed measures would play out for asylum-seekers, because the actual regulations have yet to be written by the attorney general and DHS. But Crow says one of her concerns is that the proposed changes could prevent migrants from applying for different types of relief for which they may be eligible.

When migrants come to the U.S. border and express a desire to apply for asylum, the first step is often the credible-fear interview, in which they must convince an asylum officer that they have a credible fear of returning home.

If they make it over that hurdle, they can apply for any type of relief that's available to them. For instance, people who were trafficked can apply for a T visa, and young people who have been abused, abandoned or neglected by a parent may apply for special immigrant juvenile status.

Crow also worries that the proposed changes will not address ongoing processing delays at the border. "Because many individuals seeking protection only have claims for asylum or withholding, the forthcoming regulations will not reduce the time required to adjudicate these claims – unless the Administration makes further efforts to streamline their court proceedings and violate their due process rights," she said in an email to NPR.

As it released Trump's memo, the White House included a sheet of statistics and arguments to bolster its case. "Our immigration system has reached a breaking point as we continue to see an overwhelming surge of migrants, with more than 100,000 arriving at our border in March alone," it states. "As a result of loopholes in United States immigration law, migrants claiming fear are often released into communities across the United States, where they often remain indefinitely."

The memo also proposes regulations to require nearly all asylum applications to be decided in immigration court within 180 days of filing, not including appeals. U.S. immigration courts are notoriously backlogged, and it's not clear whether the proposed changes would also provide additional resources as they aim to speed up the courts' work.

Whatever the final language of the proposed regulations, they are likely to be challenged in court.

Crow says she sees an irony in the administration's latest moves to crack down on asylum-seekers, noting that the U.S. has recently cut off aid to El Salvador, Guatemala, and Honduras — a move that's unlikely to improve the quality of life in countries that are among the biggest producers of people seeking asylum.

And when people in those countries seek a better life, Crow says, "we're making it even more difficult for them to reach safety once they flee."