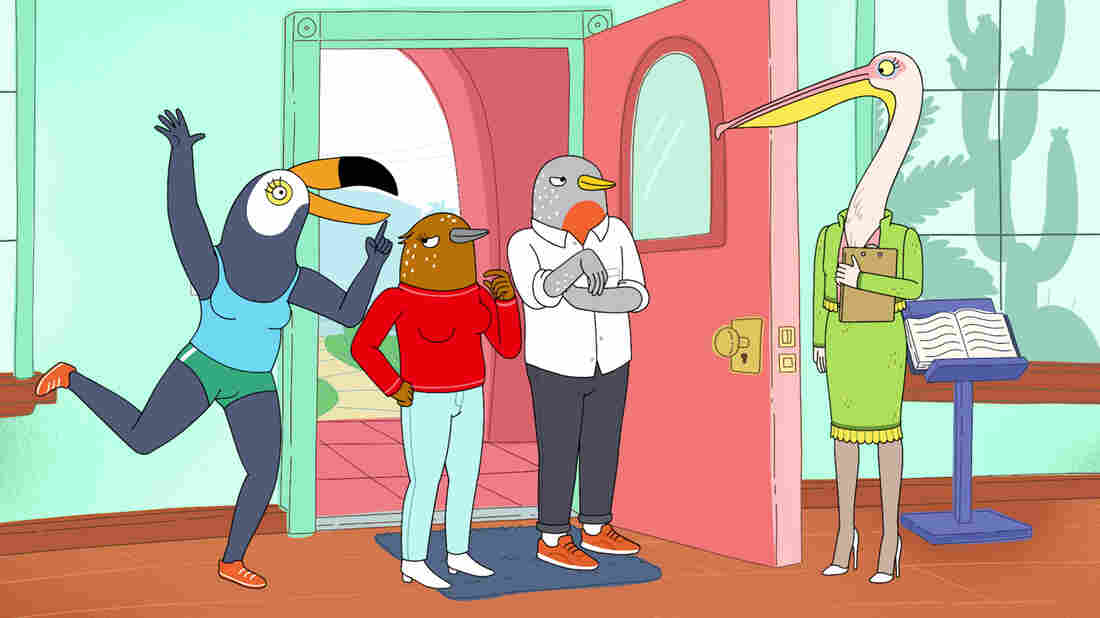 Tuca & Bertie is an adult animation that centers on a brassy, colorful toucan (voiced by Tiffany Haddish) and her neurotic best friend, a songbird (Ali Wong). Netflix hide caption 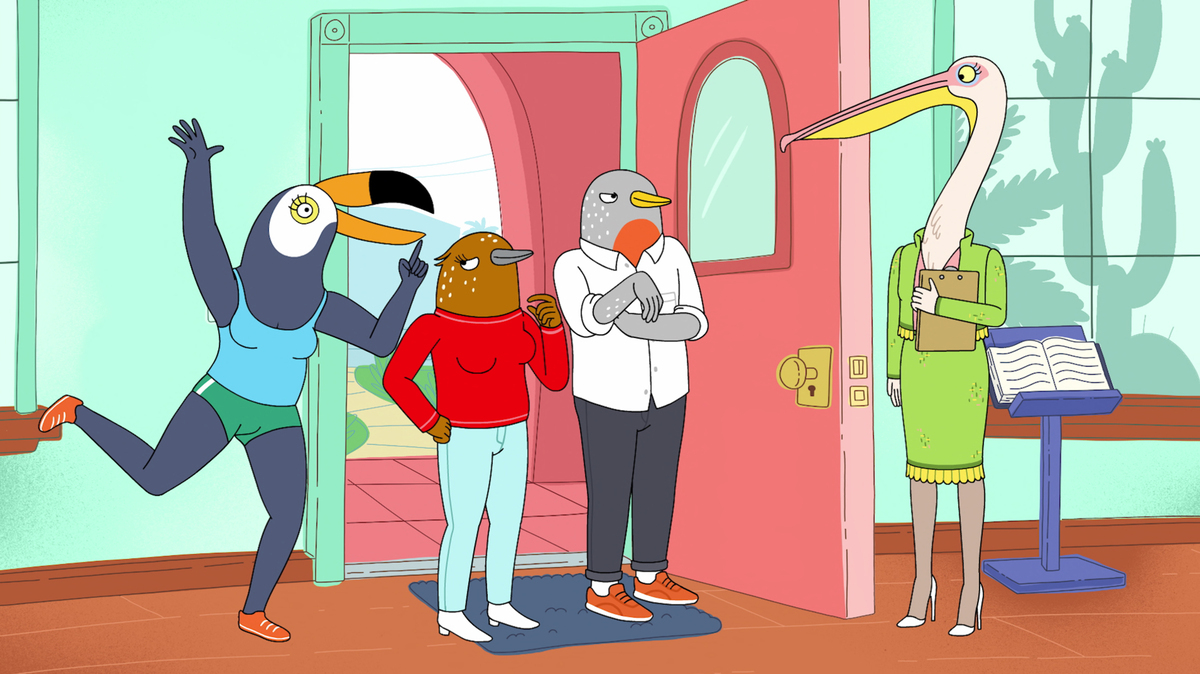 Tuca & Bertie is an adult animation that centers on a brassy, colorful toucan (voiced by Tiffany Haddish) and her neurotic best friend, a songbird (Ali Wong).

Tuca & Bertie is the latest adult animation to hit Netflix, and it centers on a brassy, colorful toucan (voiced by Tiffany Haddish) and her neurotic best friend, a songbird (voiced by Ali Wong). But the strongest voice on the show is behind the scenes — that of creator and executive producer Lisa Hanawalt.

Hanawalt, who helped shape the hit animation BoJack Horseman as its creative director, describes herself as someone vacillating between confident and anxious. So when her own show got a green light, she deliberately focused on a female perspective, and gave both sides of her personality a character.

Her brassy, bold self is woven into Tuca. "Confident, yet relatable," Tuca describes herself in the premiere. "Wearer of short shorts."

Her more uncertain, anxious side got life as Bertie. The birds are best friends in their 30s — a theme Hanawalt felt needed more exploration. 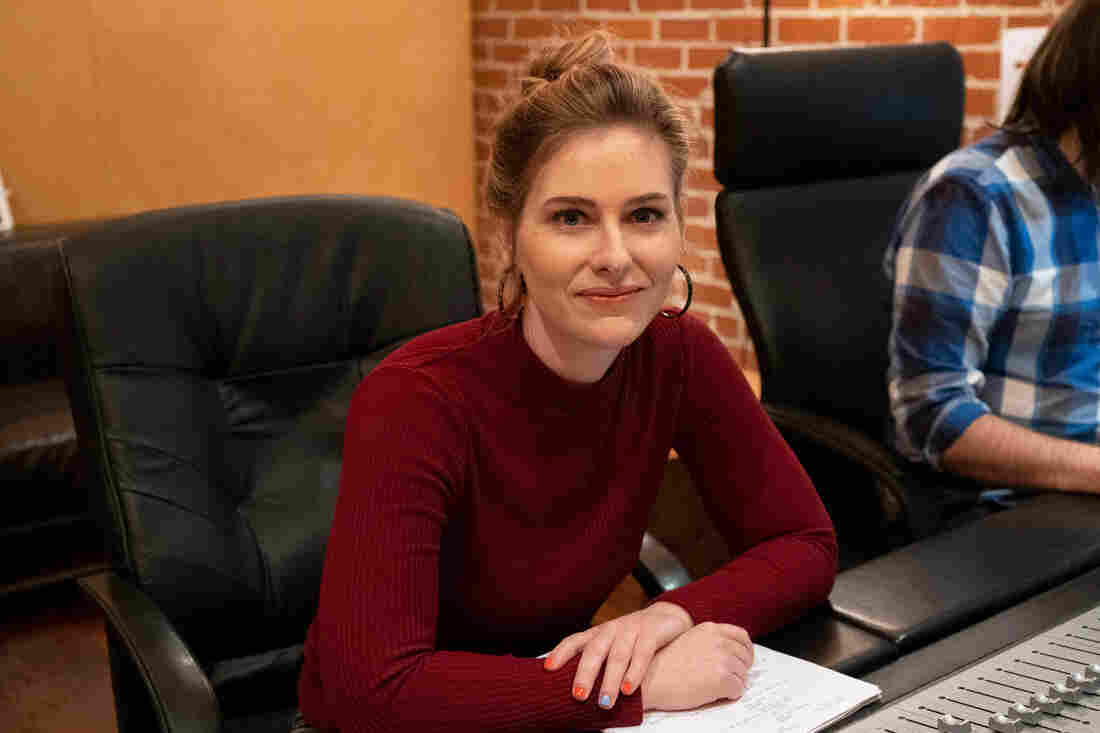 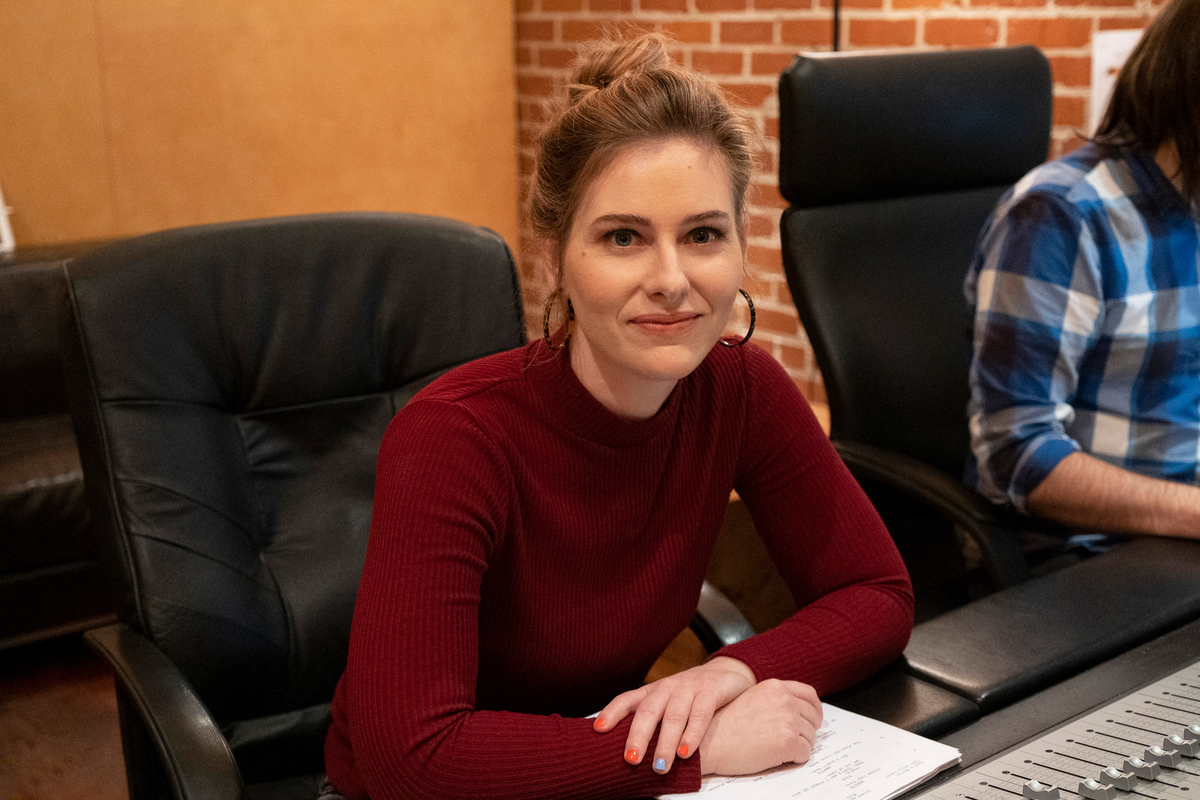 Lisa Hanawalt is the creator and executive producer of Tuca & Bertie.

"So they're getting older, and Bertie maybe wants to buy a house and start a family and get married, and Tuca feels a little left behind," Hanawalt says. "I wanted to explore what happens to a friendship like that — when you've been best friends for 10 years, but things are changing and you're maybe moving in different directions."

That this is an animated show allows Hanawalt and her team to embrace her unique sensibility. It involves absurdist humor and ... boobs. Lots of boobs.

In this show, boobs are on animals, on buildings; one boob even gets personified, popping right out of Bertie's chest in protest of a sexual advance. "I am finished. I'm finished!" the talking boob says. "I am done with today! I need a drink."

"You can just slap boobs on anything," Hanawalt says. "Boobs on a snake! That doesn't really make sense, but it doesn't need to. There's a surreality to the world."

This surreal world starring women of color and created by a woman showrunner marks a first. The existing adult animations out there — Family Guy, Archer, The Simpsons — are driven by men behind the scenes and male protagonists on the screens. So Tuca & Bertie breaks ground, as a comedy about finding your way in a male-dominated world — but also as proof that Hanawalt has found her way in a heavily male animation industry.

"I've had it pointed out to me when I'm the only woman in a room," Hanawalt says. "Some people think that that's a relevant thing to just say out loud, and I'm like, 'Really! That's a comfortable way to start a meeting. Thank you for pointing out how different I am.'

"There's a lot of people working in this industry who are just blissfully unaware of certain things and how they could be coded, or how they could come across to different types of people. So, yeah, I think it matters a lot who's in the room, and who's empowered to speak up about things."

When she became the boss, she was deliberate in her hiring.

"If you make that a goal of yours, it is not difficult to find writers of all colors and shapes and genders," Hanawalt says. "It's really not difficult."

Amy Winfrey, who directs several Tuca episodes, says she feels the benefits of a diverse room in how the show is made — the creators being "open to suggestions from everybody just in trying to get the best show possible" — and editor Molly Yahr says it shows up in the finished product.

"There is just a genuine importance for shows just displaying different parts of culture, and this show is a good indication of a type of female culture," Yahr says.

For Hanawalt, showing that women are weird and gross and multifaceted, just as she is, helps normalize our weirdnesses and idiosyncrasies.

"I just hope that the people who watch it connect with it, and that it makes them feel better about who they are, so they don't have to feel apologetic for being a certain way or not being the status quo or whatever," Hanawalt says.

To create that connection, Hanawalt is at the center of all the decisions on this show, from the overarching vision down to the sly jokes. On one afternoon, she and Yahr compare different voice takes of Wong and Haddish excitedly reacting to a Girl Thingz store (it's reminiscent of the accessory-store mall stalwart, Claire's).

"Girl things" is a cheeky reference on Tuca & Bertie. It's also the show's big idea.