Accessibility links
For 'Juliet The Maniac,' Healing Had To Come From Within Juliet Escoria's autobiographical novel is a heartfelt, raw story about surviving mental illness and learning to cope with inner demons. It's not a comfortable read — but it is a powerful one.

For 'Juliet The Maniac,' Healing Had To Come From Within

For 'Juliet The Maniac,' Healing Had To Come From Within 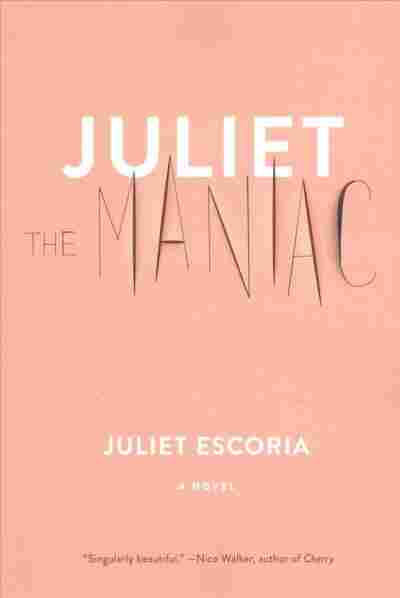 Juliet Escoria's Juliet The Maniac is a powerful mix of biography, exploration of mental illness, and fragments of a nightmare journal of the space between girlhood and womanhood. And while the current buzzword is autofiction, I grew up admiring Truman Capote's In Cold Blood and prefer to call this a nonfiction novel. Some parts could be confused with fiction, when Escoria is writing about hallucinations, but the narrative is full of letters, notes, and even patient logs that make it more of a detailed memoir, spanning two tumultuous years in Escoria's life.

At 14, Juliet was a determined, pretty and talented honors student, one of the shining stars of her Southern California high school — then something changed inside her, and she spiraled into a cycle of fights with her parents, drug use, social anxiety, self-harm, and mental illness that eventually landed her in a remote therapeutic boarding school. But that was just the start. Before she made it out of that institution, she went through two relationships, a lot of self-analysis, more self-harm, sexual experimentation with both genders, endless meds, and a couple of suicide attempts. She also learned that pills don't work for everyone and that for some people, healing has to come from inner strength, accepting yourself, and having an unbreakable determination to survive.

Juliet The Maniac is an honest, harrowing book that deals with addiction and mental illness while also showing the changing ways in which teenagers experience life. Escoria never sugarcoats any of it. Instead, she shares everything, showing readers how humans can be broken in strange ways that no amount of therapy and medication can fix. It also offers a glimpse into the nightmarish lives of those with profoundly damaged psyches:

In school, during biology class, the shadows came together and glued themselves into shapes. An army of shadows pressing against my chest, jabbing their fingers into my throat. The noises they made, not like humans or even demons but like shuffling paper, something ambivalent and clinical. I watched as skulls erupted from the walls, wild in psychedelic rainbows. I tried to shut the shapes out by closing my eyes, but the colors flickered brighter across my eyelids. The shuffling rumbled into thunder, laughter filling in the gaps. I tried to slow my breaths, imagining myself as a tree with solid roots sinking into the floor, but the chaos swelled into violence. I felt blood, wet and sticky. It poured down my arms. It was horrible.

Much like a nonfiction book, outside sources give Juliet The Maniac heft and a sense of authenticity. Escoria earns the readers' trust early, and that helps her story feel like a continuous gut punch, a 336-page attack on the senses that makes readers suffer whenever Escoria suffers, until they're as confused as she is.

Questioning Authenticity — And Reality — In 'The Made-Up Man'

There is a space between the inside and outside world where communication fails and feelings become mixed, hard to decode. This problematic space is where Escoria lived. They way she acted was something people could see, but could never identify, predict, or cure. She was a painful, uncomfortable mystery. In a way, this is a book about how those ill-prepared to deal with mental illness tend to label it and pass it on. A great example comes from Juliet's school psychologist, who paid so little attention to her as a patient that he couldn't be bothered to get her name right:

She often overlooked or neglected critical issues that required moral judgement, and IS PRONE TO OUTBURSTS OF ANGER THAT ARE, ON OCCASION, VIOLENT. As a result of this, along with her psychiatric treatment, prescribed medication, and problematic school struggle, it appears that Julie would immediately qualify for placement under the category of EMOTIONALLY DISTURBED.

'Juliet The Maniac' is an uncomfortable read. There is heartbreak and blood, anger and violence, suicide attempts and terrifying visions that shatter a young woman's life. That said, it is also a necessary read.

Juliet The Maniac is an uncomfortable read. There is heartbreak and blood, anger and violence, suicide attempts and terrifying visions that shatter a young woman's life. That said, it is also a necessary read. Commercials may tell us a pill holds the solution; for some, therapy is a surefire way to get better, but that's sadly not the case for everyone. Escoria was prescribed a cornucopia of pills — Tegretol, Paxil, Zyprexa, Wellbutrin, Depakote, Remeron, Zoloft, Trazodone, Buspar, Ativan — and they all failed to help her. Something deeper was broken inside her, something she failed to identify even when it was right in front of her: "I was so angry. I couldn't figure out why. I was getting along with my parents, Holly was great, it was nearly summer and my horrible freshman year was almost over. Things were fine. I was fine. It was terrible."

Teenage angst is often dismissed as "a stage," but for some it's something more profound and infinitely more problematic. Juliet The Maniac is a heartfelt, raw, powerfully told story about surviving mental illness and learning to cope with inner demons. Escoria is a talented writer who's not afraid to write her truth, even when it will scrape viciously at the souls of readers. This book hurt, but by the last page all I wanted was to give the author a hug and thank her for sharing.