Accessibility links
Trump Administration Has Drastically Dropped Visas For Afghan And Iraqi Interpreters Veterans and dozens of lawmakers say they're afraid the promise they made to protect families who assisted U.S. forces is being broken. 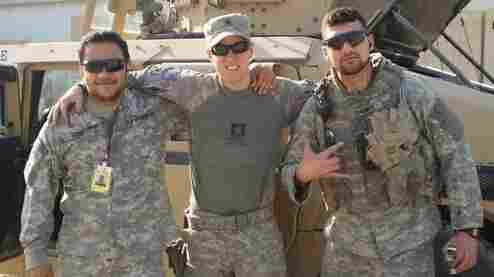 Khalid al-Baidhani found out early about the risks of being an Iraqi working for the U.S. military in Baghdad. In 2006, he was waiting for a ride home outside a U.S. base.

"A car stopped right away, took out the pistol and start shooting me," Baidhani recalls, "I [couldn't] feel anything after that."

Baidhani survived, recovered and went back to work with U.S. forces.

"I want ... good communications between U.S. military and Iraqi civilians over there," he said.

His uncle also volunteered. So did his brother Wisam, who worked with Peter Farley, a former Army sergeant from Massachusetts.

"I couldn't imagine in a million years that I'd go over there and come back with one of my best friends being an Iraqi national," Farley told NPR.

In light of the sacrifice made by Iraqis and Afghans who assisted U.S. forces, Congress created the Special Immigrant Visa Program to get them and their families to safety in the U.S. Farley says it was about gratitude and also an incentive for local nationals to help U.S. troops. Now veterans such as Farley, as well as dozens of lawmakers, say they're afraid the promise they made is being broken. Under the Trump administration, the number coming to the U.S. has dropped drastically.

"This administration is hostile to refugees," says Adam Bates, with the International Refugee Assistance Project.

"It would be impossible to say that these substantial drops are not a part of some policy. These are people who put themselves at risk because they served with U.S. forces in Iraq and Afghanistan," he says.

A U.S. State Department official told NPR that it is working closely with U.S government partners to accelerate the visa processing, while maintaining national security as a highest priority. In response to a bipartisan letter from Congress, the Department of Homeland Security said it was aiming to speed up the visas after recent changes in the program, also with security as an overarching concern.

None of that makes sense to Farley, who says that if the Baidhanis were a threat to Americans, they could have killed him any number of times in Iraq.

"I mean, this family has sacrificed more than most American families," Farley says. 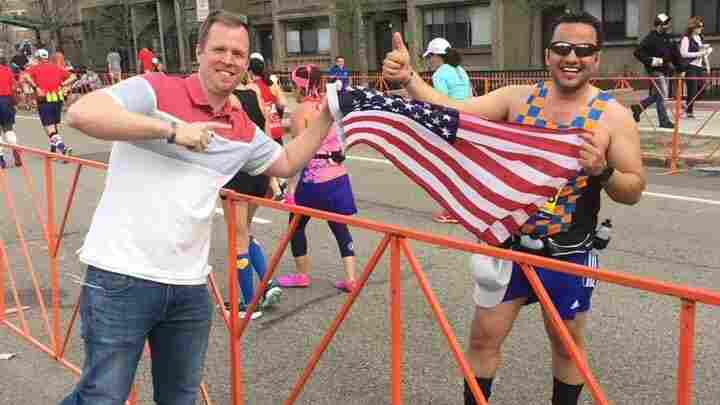 Farley (left) with Wisam al-Baidhani at the Boston Marathon. Baidhani ran the race for charity after moving to the U.S. as part of a program to protect Iraqis and Afghans who assisted American troops. Courtesy of Peter Farley/NPR hide caption 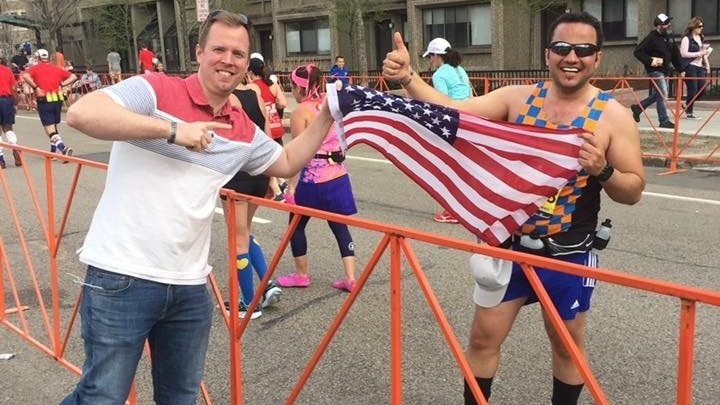 Farley (left) with Wisam al-Baidhani at the Boston Marathon. Baidhani ran the race for charity after moving to the U.S. as part of a program to protect Iraqis and Afghans who assisted American troops.

He lobbied the U.S. government to get both Baidhani and his brother Wisam to the U.S. in 2011. They've been living and working here ever since. But the program came too late for Khalid's uncle — gunmen killed him in 2008, on his way home from an American base.

Baidhani's father and younger siblings also qualified for visas, but they're stuck in Baghdad.

"We worry about this family every day," Farley says. Wisam declined to be interviewed, he says because he has become depressed.

"It's hard to keep hope with the way things have gone," Farley says.

The way things have gone is that the family is still in Baghdad. After years of waiting and red tape, Baidhani's father, stepmother and three younger siblings were granted U.S. visas in 2016. They sold their family home in Baghdad, and all their other assets, and packed their bags. The day before their flight, they got a call that the visas had been put on hold pending yet another security check.

"I was shocked. It was like someone shot me with a bullet. I collapsed," Mohammad, Khalid and Wisam's father, told NPR.

I just want to ask them to see us as a family who actually wants to serve the country.

He's now crowded into a rundown rented house with his eldest daughter and her husband — two bedrooms for the seven of them, trapped in a tough neighborhood in Baghdad. The family has no idea when it might get permission to travel.

Khalid's younger brother, Ahmed, is now 23. He quit his job when he thought he was leaving in 2016 and hasn't had steady work since then.

"We sacrifice a lot — my brother shot twice," he says. "Why us? Security check after security check. I just want to ask them to see us as a family who actually wants to serve the country," he said.

Farley — like many other vets who promised their interpreters safety in the U.S. — says he is angry that his promise has been broken. And he thinks that is a national security issue.

"If I was in their shoes, and I learned about the stories of the U.S. not offering protection to people that stepped up and fought alongside their soldiers — or to their families of those heroes," Farley asks, "why would I ever sign up to do that for the U.S.?"

In the audio of this story, as in a previous Web version, we conflate the number of Iraqis waiting in a backlog of the Special Immigrant Visa Program with those in the backlog for the U.S. Refugee Admissions Program P-2 Direct Access Program. According to the State Department, there are only 200 Iraqis still waiting for visas from the SIV program. The backlog of Iraqis in the DAP program is over 100,000.