Accessibility links
'Hacking Darwin' Explores Genetic Engineering — And What It Means To Be Human The waters of genetic meddling are murky; in a new book, technology futurist Jamie Metzl reviews where we've been in the past as a guideline for where we might be headed. 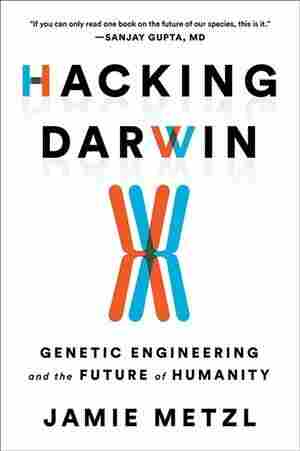 Genetic Engineering and the Future of Humanity

We all know that the world is changing. Fast. But do we know where it is going? Not exactly.

That being the case, how can we control where it is going? And who is the "we" in control? In Hacking Darwin: Genetic Engineering and the Future of Humanity, the technology futurist, geopolitical expert, past White House fellow, and, like this author, dedicated endurance athlete Jamie Metzl paints a picture that is at once wondrous and terrifying.

His focus, as the book title indicates, is the impact of genetic engineering in the very definition of what it means to be human. The prospects border on what would, a few years back, be considered a mix of impossible and, to many, immoral. Metzl writes with great clarity and a sense of urgency that we should all take to heart.

His case, based on an extrapolation of current research, is firmly grounded on what is indeed possible within the next decade or so. This is no wild sci-fi extrapolation but is already beginning to happen, given advances in genomics and gene-editing techniques. Like Metzl, I believe the conversation of where this is taking us — and how such advances should be regulated — is essential.

The central question of this fast-paced account of where modern genetics is taking us is simple: How far should we go in changing our genetic identity? Assuming, in tandem with current research, that we will be able to manipulate the human genome at a level of detail that will allow for the cure of many horrible diseases: Should we also rethink our own design? If so, where do we draw the line between the acceptable and the morally repulsive?

For billions of years, life on Earth evolved through the process of Darwinian evolution via natural selection: Small errors during reproduction propagate from parents to offspring, occasionally offering some a survival advantage to find food or fight enemies. Had reproduction been perfect, the only living creatures on Earth would be single-celled organisms, our 3.5 billion-year-old ancestors. We are, quite literally, the product of reproductive mistakes and planetary cataclysms. We — and all other living creatures — are the mutants who made it in a planet that threw many curved balls our way. Still, despite life's remarkable resiliency, up to this point the evolution of life on Earth has been a passive process. Genes mutated in random ways, without anyone at the helm.

We are on the verge of taking control over evolution and reinventing our species. And, as a by-product, reinventing any other species as well. Now what?

The waters of genetic meddling are murky, and Metzl expertly reviews where we've been in the past as a guideline for where this is all headed. Eugenics is a tragic example. To control breeding with the goal of improving the human population sounds a lot like what we do with prize bulls and race horses. However, with humans it gets much worse, as different cultural and political ideological agendas will have very different views of what "improvement" means. Horrible crimes against humanity were committed in the name of different considerations of "improvement." In the first half of the 20th century, tens of thousands of patients in mental institutions and criminals in the U.S. were sterilized without their acquiescence. In 1925, Hitler wrote in Mein Kampf, "The stronger must dominate and not mate with the weaker." Within four years after taking power in 1933, the Nazis sterilized an estimated 400,000 Germans. And, as we all know, the worse was still to come.

It may seem unnecessarily alarmist to compare eugenics with genetic enhancement. However, the focus being the improvement of the human race, the difference is mainly between the coercive nature of the old eugenics against the presumed choice involved in genetic modification. The complication is that, in a cut-throat world, parents would want to give their kids the best competitive advantage they can. If this advantage is available through direct gene editing, wouldn't you want to give it to your child? Who would not want their kids to have a healthier life, higher IQ, longevity, and freedom from different genetic diseases?

Science's most noble purpose is to improve the human condition. To a large extent, this means to alleviate suffering. If we have arrived at a point in our evolutionary history where we are able to design an improved future for our offspring, why not do it?

There are, of course, clear reasons to pursue gene editing. If we can cure a genetic disease, be it a single-gene or a more complex many-gene one, we have the moral duty to do so. But gene technology will not be restricted to illnesses. Enticements from market forces and the good will of parents and family will want to make the most of it for their children. But what of those who cannot afford the treatment? We live in a world of profound economic disparity, where very few detain the most resources. The obvious extrapolation we can make from where we are now to a future with genetic modification is that the same very few that detain the most resources will be the first ones to use the new technology. The short-term consequences would be devastating, a split in humanity between those who are genetically enhanced and those who can't be: superhumans coexisting with humans. The unfairness of this vision shakes the moral core of society.

It is not enough to trust that we will collectively reach high moral ground and share equitably the fruits of the new technology among all. A quick look at the world today is enough to realize that this is simply utopic. How much could we trust governments across the globe to reach a fair set of regulatory guidelines? We can already see huge differences in the current state of legislation related to GMO foods and the use of stem-cell therapies, for example. And what political leader would opt not to enhance their population, given the obvious competitive benefits in the market place and, very importantly, militarily? Metzl brings this complex questioning alive, and urges us to "apply our best values to influence how the genetic revolution will play out." I hope his call to arms is not hopelessly naïve.

Given our past and present history of global conflict, such profound change at a global scale can only happen if we see ourselves first and foremost as a single species, striving to improve ourselves as a whole. Perhaps, the convincing argument, which Metzl didn't propose, will come from understanding that we win by numbers and not by tribal isolation. This may be the language that both governments and market forces will have to embrace to avoid massive social unrest. Our survival may depend on it.

Marcelo Gleiser is a professor of Physics and Astronomy at Dartmouth College and author of The Island of Knowledge: The Limits of Science and the Search for Meaning. He is the winner of the 2019 Templeton Prize.