Accessibility links
With Major Contracts Ahead of 2020, Voting Machine Industry Comes Under Scrutiny Close ties between vendors and election officials are getting extra attention as states plan to spend hundreds of millions of dollars on new voting machines by next year. An electronic voting machines that produces a paper receipt from Election Services & Software. The company is among those bidding to replace all of Georgia's voting machines but close relationships between state officials and ES&S have raised questions about the fairness of the bidding process. David Goldman/AP hide caption 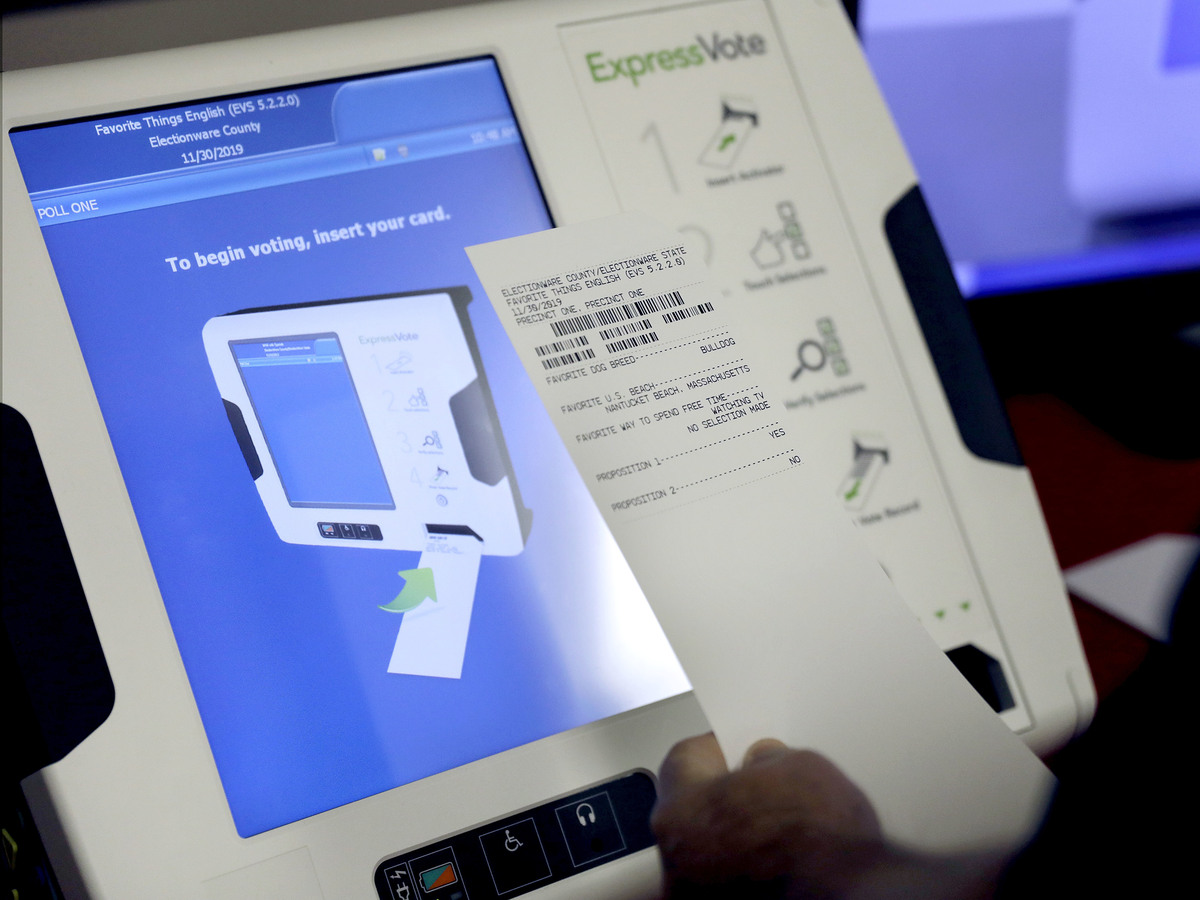 An electronic voting machines that produces a paper receipt from Election Services & Software. The company is among those bidding to replace all of Georgia's voting machines but close relationships between state officials and ES&S have raised questions about the fairness of the bidding process.

It is likely to be a banner year for the voting equipment industry with state and local election offices planning to spend hundreds of millions of dollars on new machines ahead of the 2020 election.

This year's purchases will probably amount to the biggest buying wave since right after the 2000 presidential election, when officials rushed to replace discredited punch card machines with touchscreen voting equipment. Those machines are rapidly aging and are being replaced with machines that leave a paper backup as a result of security concerns about purely electronic voting.

The voting equipment purchases come at a time of increased scrutiny over the security and integrity of elections following Russia's efforts to interfere in the 2016 election.

Some states, such as Georgia, South Carolina and Delaware, are replacing all of their voting machines, while several other states, including California, Ohio and Pennsylvania, are replacing much of their equipment. About one quarter of voters live in the states doing most of the buying.

The buying spree has also put a focus on the close ties between vendors and the government officials who buy their equipment. Advocacy groups and some politicians allege that vendors have unduly influenced the procurement process in many places, something the companies and election officials deny. 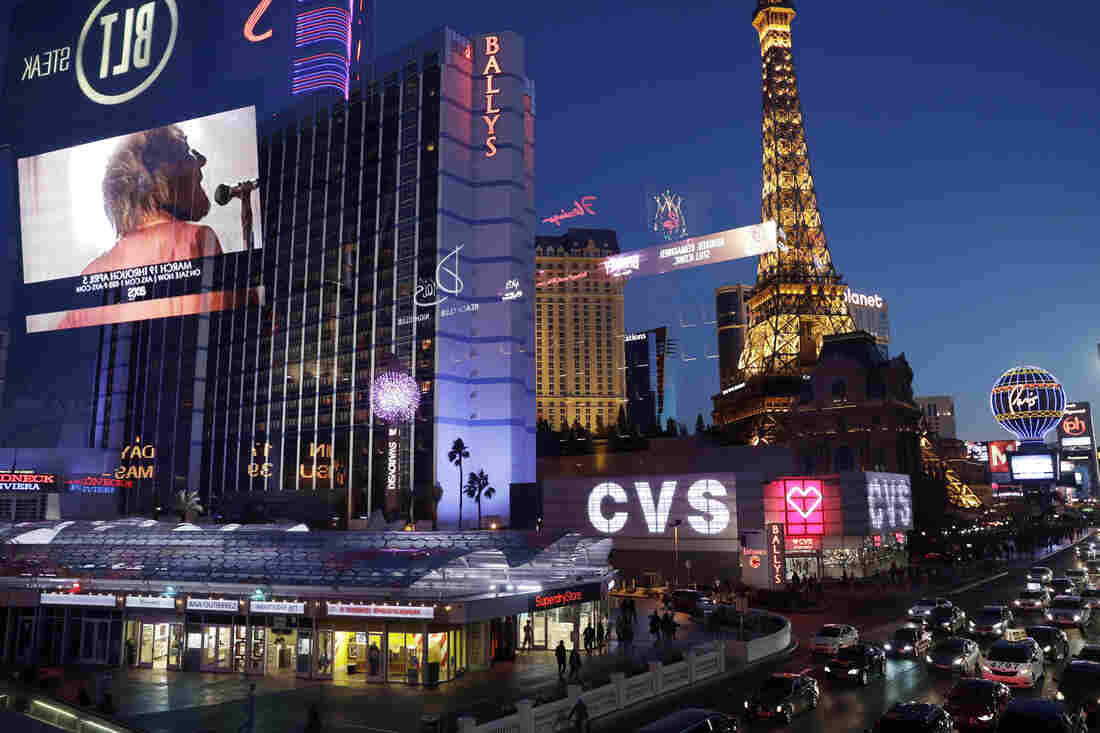 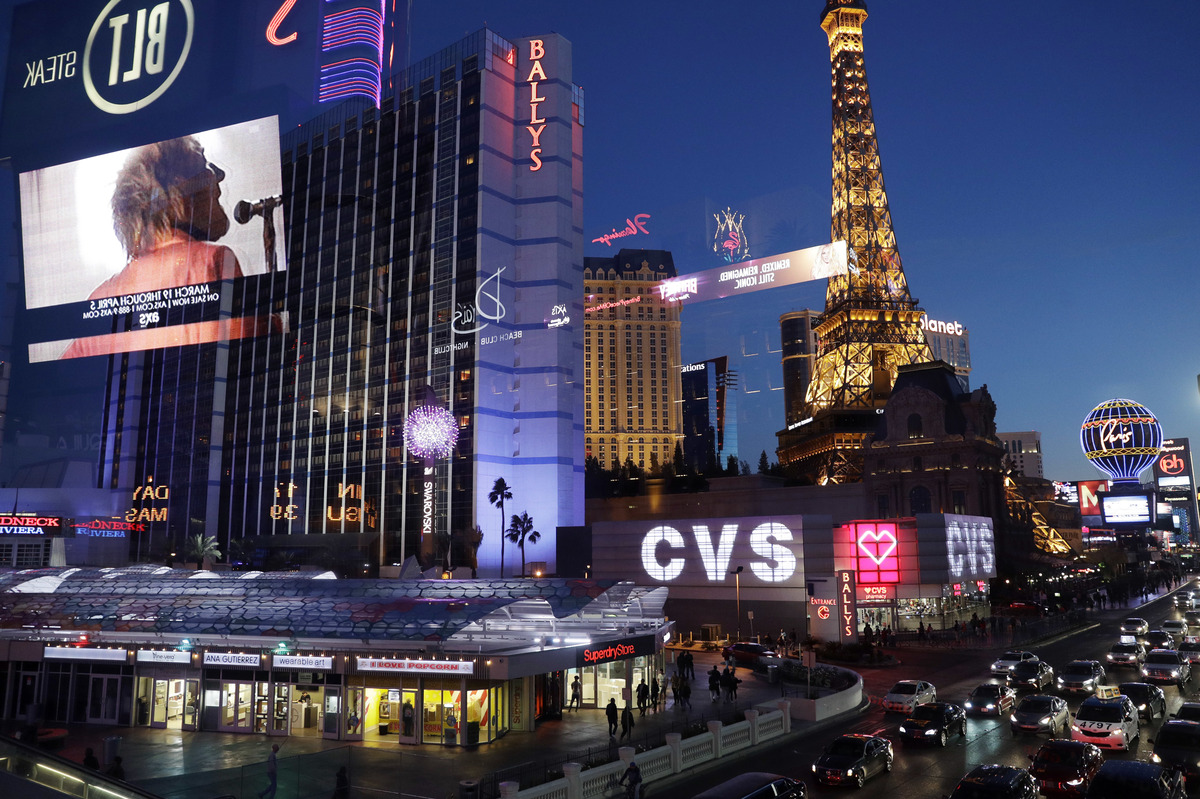 Election Systems & Software took some state and local election officials on paid trips to hear their views about voting systems, including one to Las Vegas, pictured here.

Part of the concern is that only three companies dominate the market. Election Systems & Software (ES&S) is the largest, followed by Dominion Voting Systems and Hart InterCivic. All three companies have worked extremely closely with election officials for years, with the vendors often spending thousands of dollars to sponsor conferences and receptions attended by the officials. The industry also hires former election officials to represent them.

Last year, McClatchy reported that ES&S had set up a customer advisory board composed of between 10 and 15 state and local election officials, many of whom at some point had a role in choosing new voting equipment.

The stated purpose of the board was to share information about voting trends and equipment needs. But the company also paid travel expenses for some of the officials to attend two meetings a year, including one trip to Las Vegas, leading to charges of potential conflicts of interest.

Kathy Rogers, senior vice president of government relations for ES&S, told NPR that criticism of election officials who took part in the board's work was "very unfair," but that she "wouldn't put anyone in that situation again" and that no future meetings are planned and the board is unlikely to be continued.

Still, the issue continues to be a factor in purchasing debates. Some former advisory board participants have recused themselves from buying decisions to avoid the appearance of favoritism, even if they had state ethics approval of their participation. That includes South Carolina Election Director Marci Andino, who had about $19,000 in travel expenses covered by ES&S during the 10 years she served on the board. South Carolina is preparing to replace all of its touchscreen voting machines by next year, at an estimated cost of more than $60 million.

The news that a Pennsylvania county election official had also served on the board led that state's auditor general, Eugene DePasquale, to ask officials in all 67 counties to report any gifts they had received from voting machine vendors. Eighteen said that they had, with the gifts ranging from expense-paid trips to Las Vegas, to winery tours to boxes of chocolate-covered pretzels.

DePasquale says that taking even small gifts, which are allowed under state law, "smacks of impropriety." The state expects to spend some $150 million on new voting equipment for next year's elections and competition between vendors to get a slice of the business is fierce.

DePasquale says decisions about what equipment to buy should be based on "security and long-term effectiveness for the voters as opposed to who was taking people out on wine tours and amusement park trips." He says he has no evidence that the gifts have influenced specific buying decisions, but says even the appearance of special treatment undermines public confidence. DePasquale has written to colleagues in other states suggesting that they conduct similar audits.

Edgardo Cortes, who served as Virginia's elections commissioner until last year, says he declined ES&S's invitation to join the advisory board because he felt it would be inappropriate. But he also does not believe that expense-paid trips and gifts play a role in equipment purchasing decisions as much as the personal relationships election officials develop with company representatives over time.

"We know them. We've been doing business for a long time. We'll keep them, not because they're necessarily offering the best deal, but because we're comfortable working with them," Cortes said, explaining how the close relationship can affect buying decisions. 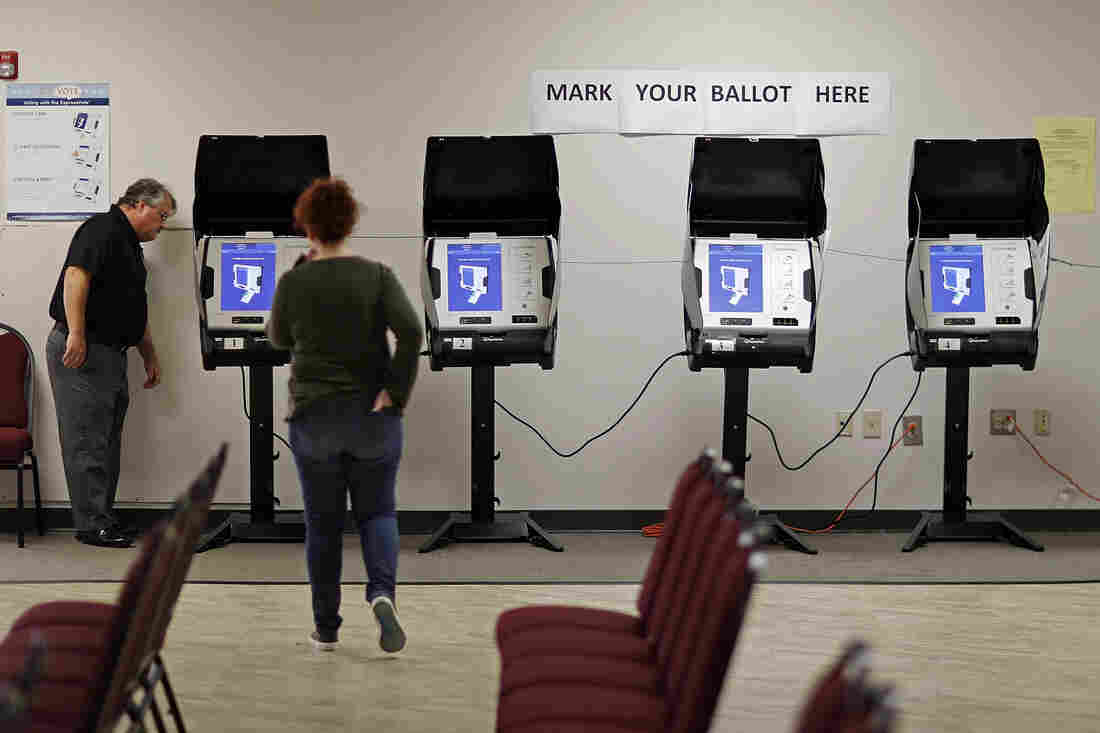 Electronic voting machines being tested in Conyers, Ga. The state has been the focal point for the debate over how closely election officials and the voting industry are intertwined. David Goldman/AP hide caption 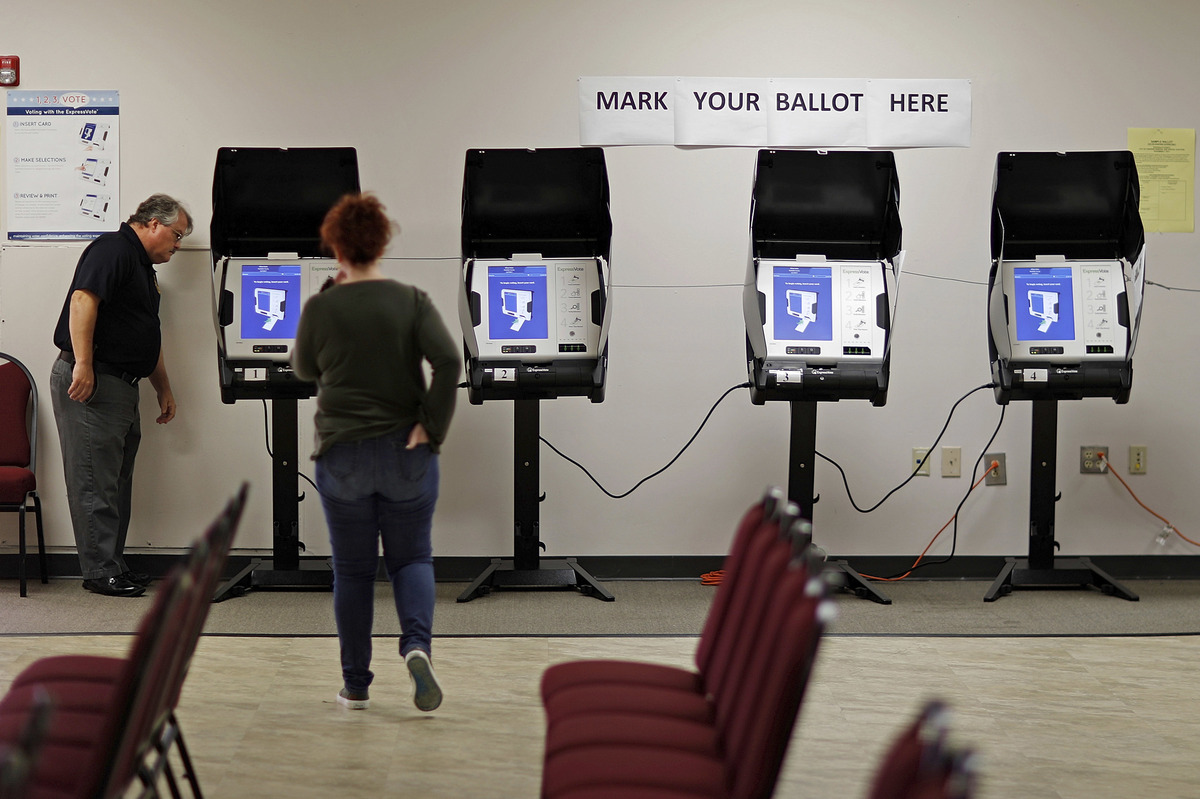 Electronic voting machines being tested in Conyers, Ga. The state has been the focal point for the debate over how closely election officials and the voting industry are intertwined.

If nothing else, close ties with vendors have provided ammunition to those fighting purchasing decisions. Nowhere is that the case more so than in Georgia, where there is ongoing debate over replacing all of its paperless voting equipment with systems that use paper.

Democrats have complained that Republicans, who control the state government, are especially cozy with ES&S, one of a handful of bidders on the project. Gov. Brian Kemp (himself the former top election official in Georgia) hired a former lobbyist for the company as his deputy chief of staff and Rogers, the company's head of government relations, is the state's former elections director. The governor's top lawyer was on an ES&S advisory council.

Democratic state Sen. Elena Parent, who opposes the type of equipment the state is preparing to purchase — which includes an electronic marking device that produces a paper ballot — condemned the close ties between the company and the state.

"I've been given absolutely no good reason why we should buy these things. There's not one good reason. So therefore it just reeks of corruption, that we're prioritizing vendors over voters," Parent said on the Senate floor during a debate in March.

Republicans counter that the type of machine they want to buy is preferable to simple hand-marked ballots because it eliminates confusion over voter intent.

Still, many computer security experts and activist groups have raised concerns that the ballot-marking devices, which may use a barcode to tally votes, are vulnerable to manipulation.

Several vendors have bid on the contract, which is expected to be awarded in July.

Jeb Cameron, regional sales director for ES&S in Georgia, says if the company wins the contract it will be due to the product and the price and he defended how the company operates.

"Of course we've built relationships in the state. I would say we wouldn't be doing our job if we didn't build those close relationships," Cameron said.

Concerned about the impact, several congressional Democrats have called for greater federal oversight of election vendors and stricter security requirements for the equipment they're trying to sell. So far, those proposals have gone nowhere. States and localities have resisted federal mandates when it comes to elections, which are generally their responsibility.

The vendors recognize that scrutiny about purchases is likely to grow as the 2020 elections approach, especially with intelligence community warnings that the U.S. election system remains a target for hackers.

In a letter last month to four senators, ES&S President and CEO Tom Burt wrote that the company supports legislation requiring vendors to submit their systems to stronger security testing and mandating both paper ballots and post-election audits to ensure the accuracy of the vote.

The senators — Amy Klobuchar, D-Minn., Mark Warner, D-Va., Jack Reed, D-R.I. and Gary Peters, D-Mich. — wrote to ES&S, Dominion and Hart in March, noting that their companies make up about 92 percent of the voting machine market.

"The integrity of our elections is directly tied to the machines we vote on — the products that you make," they wrote. "Despite shouldering such a massive responsibility there has been a lack of meaningful innovation in the election vendor industry and our democracy is paying the price."