Accessibility links
California Is Paying Farmers To Help Fight Climate Change To help meet its ambitious climate goals, California is paying farmers to grow cover crops. The aim is to promote healthier soil that can absorb more carbon from the atmosphere. 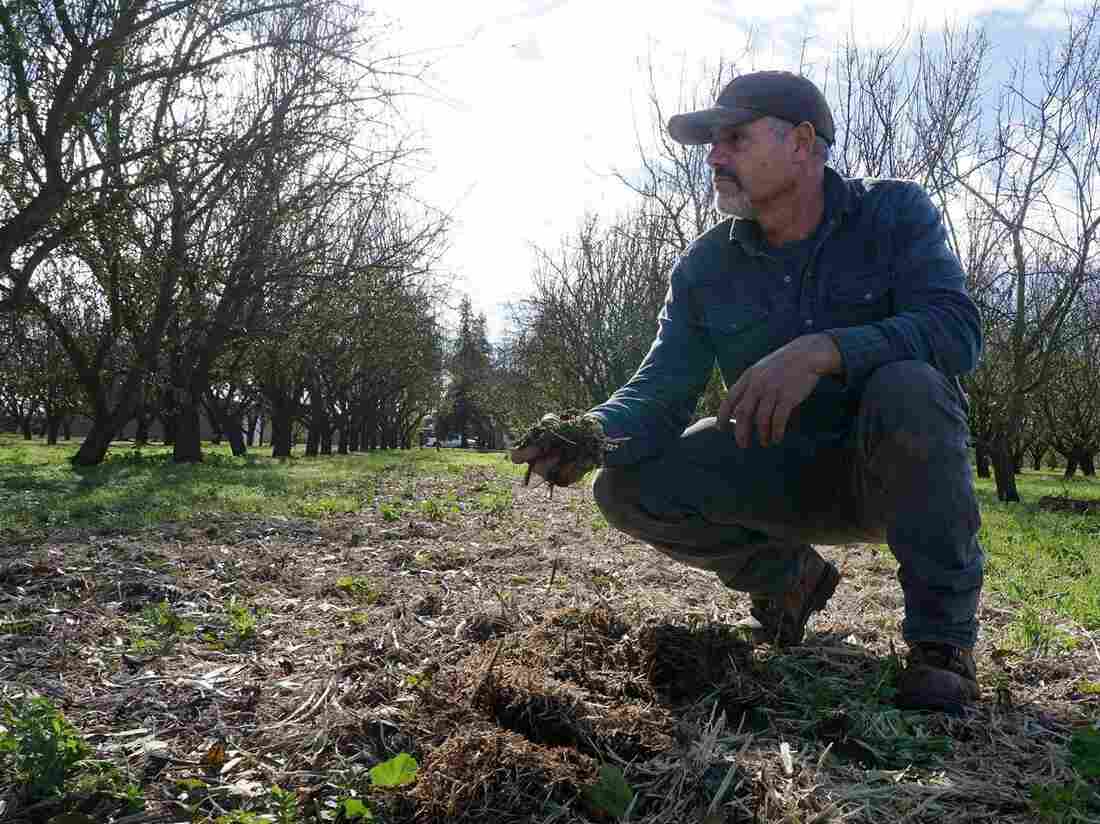 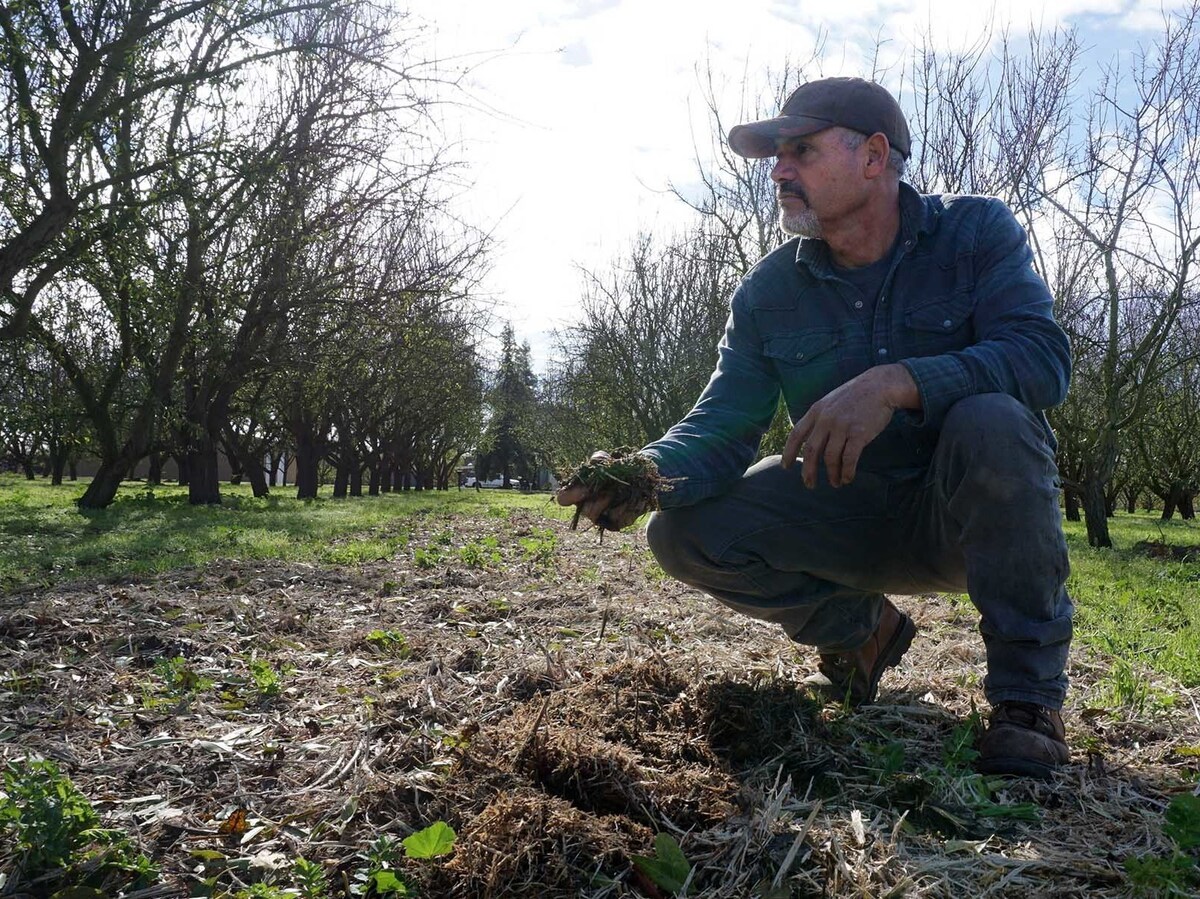 Jose Robles spreads mulch and compost under his almond trees with help from a California climate change grant.

Electric cars and solar panels are the most visible signs of California's ambitious climate change policies. Now the state is setting its sights on a lower-tech way to cut carbon emissions: soil.

It's spending millions of dollars to help farmers grow plants, which absorb carbon and help move it into the soil where it can be stored long-term. This makes California home to some of the first official "carbon farmers" in the country.

Not that almond grower Jose Robles thinks of himself that way.

Climate is something they talk about in Sacramento, the state capital, he says, not around Modesto, where he lives and works.

But in December, the ground under Robles' almond trees was a carpet of green, full of mustard plant and clover. It's not a common sight in the Central Valley. After all, most farmers hate weeds.

"Everybody wants to have the orchards nice and clean," Robles says.

His neighbors really don't understand it.

Robles got the idea a few years ago, during California's severe drought, when he had to cut back on watering his trees.

"We had no water," he says. "It made us look at things different."

Robles knew that richer earth with more microorganisms holds moisture longer, but there wasn't a lot of organic matter in his orchard to build the soil up. Like most farmers, he sprayed herbicides to kill weeds.

So he decided to grow organic matter specifically to feed his soil. He planted species that most people commonly see as weeds, but when sown on purpose are known as a "cover crop."

Once they get a few feet tall, he mows them and lets them decompose, along with some extra compost and mulch. A $21,000 grant from California helps cover his extra costs and labor.

It can be tricky, because almonds are harvested from the ground after they're shaken off the trees. Having mulch or weed remnants on the ground would interfere with that, so Robles has to make sure the organic matter breaks down before harvest begins.

He has already seen a difference.

"The trees, they don't stress as much, because they hold the moisture a lot longer," Robles says. 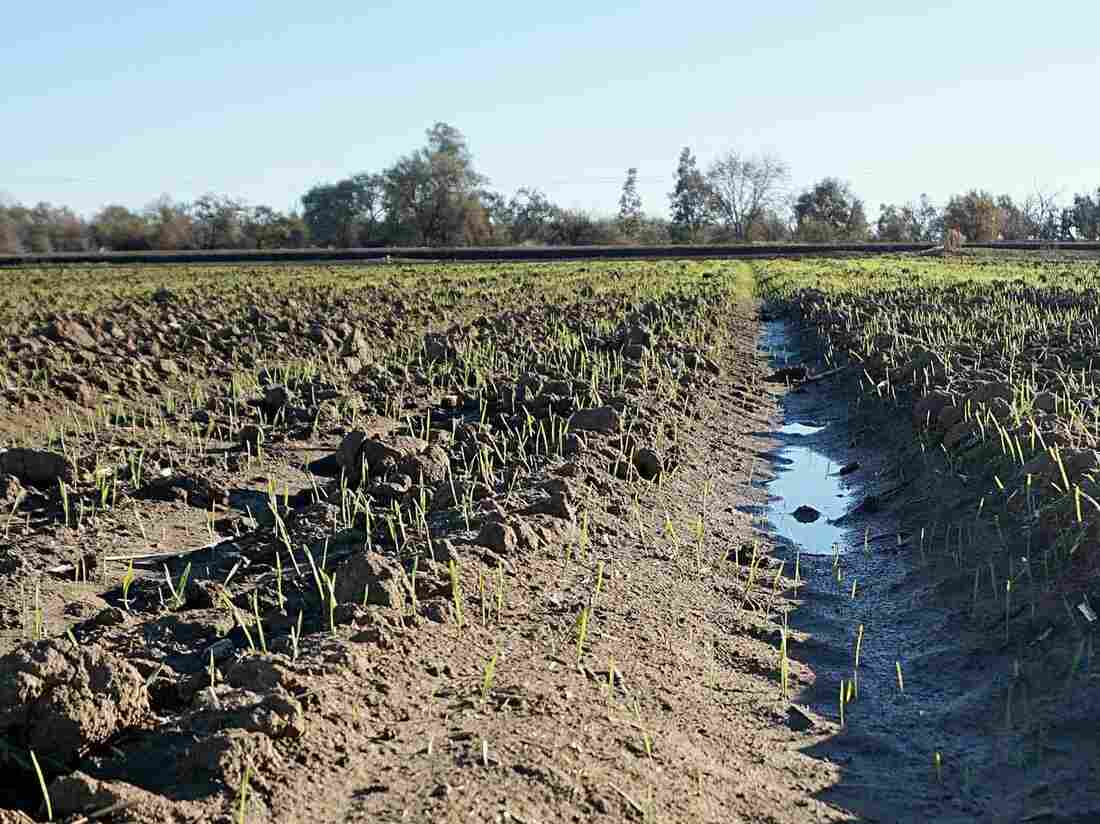 A field at Russell Ranch at the University of California, Davis, where carbon storage techniques are studied. Lauren Sommer/KQED hide caption 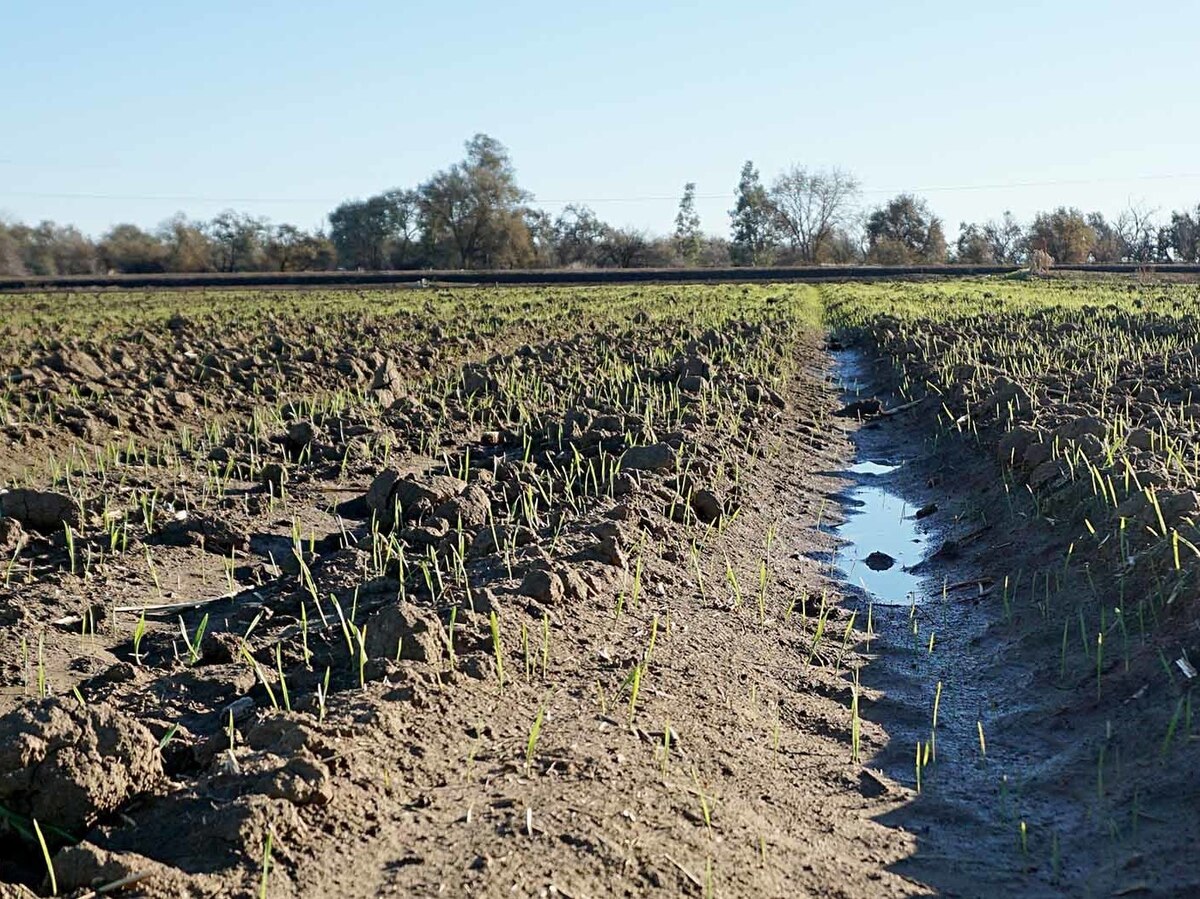 A field at Russell Ranch at the University of California, Davis, where carbon storage techniques are studied.

Beyond cutting emissions, absorbing them from the air

Before leaving office, Gov. Jerry Brown set a goal for California to be carbon neutral by 2045. That will likely mean not just reducing carbon emissions — from electricity production, cars and buildings — but also absorbing carbon that's already in the air.

California's Healthy Soils initiative is now in its third year, and it's designed to be part of the state's climate strategy. A state report finds that farms and forests could absorb as much as 20 percent of California's current level of emissions.

"I think there's great potential for agriculture to play a really important role" in reaching the state's climate goals, says Kate Scow, professor of soil microbial ecology at the University of California, Davis.

We have very ambitious climate goals, and without natural and working lands, California simply won't get there.

As we talk, she's standing in a large wheat field at Russell Ranch, 7 miles west of the campus, where the university plants crops to study sustainable agriculture.

"Soil is alive," she says. "There's farmers that know that."

To show me, Scow starts enthusiastically digging in the dirt. "All right, see, we're starting to hit the mineral soil," she says.

This is where the carbon is stored. Plants soak up the carbon dioxide in the air to build leaves and stems. Their roots pump the carbon down into the earth. Then, when the plant dies, its organic matter gets broken down by microbes and fungi.

"The deeper you can get [carbon] in the soil, especially below the plow layer, the more stable and secure it's going to be," she says. That's key to preventing the carbon from being released back into the air.

"We have very ambitious climate goals, and without natural and working lands, California simply won't get there," says Jeanne Merrill, with the California Climate & Agriculture Network, a coalition of ag groups working on climate policy.

"Some are willing to say that it's climate change," she says. "Others are unsure. But I think many know that things are changing and they need different tools."

Farmers are interested in the climate programs, Merrill says, if only because it can help them to weather extended droughts.

Hundreds have signed up. But state climate officials say the Healthy Soils program needs to be five times larger to have real impact. Gov. Gavin Newsom has requested more money for the program, but a decision will be up to state lawmakers as they craft a budget in coming weeks.

Merrill says that expanding the healthy soils initiative would send a signal that California's climate efforts need help from the entire state, not just coastal cities.